Lots of celebrities support causes, putting on benefit concerts or performances or donating bundles of cash to communities in need.

Mia Farrow’s done all that, too. As a UNICEF Goodwill Ambassador, she has also traveled to different regions of Africa to interview survivors of civil wars:

But now, Farrow is taking her support a step further.

On Monday, April 27, the actress will begin a hunger strike to bring attention to the political, economic, and social crises that have been gripping Darfur, Sudan for years and which have recently worsened. As Farrow wrote on her blog:

“On April 27th I will begin a fast of water only in solidarity with the people of Darfur and as a personal expression of outrage at a world that is somehow able to stand by and watch innocent men, women and children needlessly die of starvation, thirst and disease.”

Farrow has long been concerned about social problems in Africa, and has used her blog and other multimedia tools, such as her Flickr photostream, to raise awareness and call for action from people of privilege in other countries. 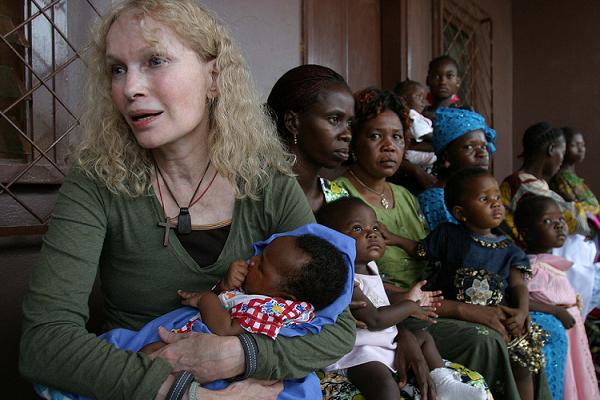 But she seems to feel the hunger strike is the most effective action she can take to draw attention to a worsening crisis the rest of the world is all to eager to ignore. She wrote:

“I undertake this fast in the heartfelt hope that world leaders who know what is just and right will call upon the Government of Sudan to urgently readmit all of the expelled agencies or otherwise insure that the gap is filled, giving aid workers unimpeded access to the populations before they begin to die in numbers that could dwarf the Rwandan genocide. I also call upon President Obama and other leaders with influence to help build a credible peace process that can end the suffering in Darfur.

I hope human rights advocates and citizens of conscience around the world will join me in some form of fasting, even if for one day. And when I can no longer continue, I pray another will take my place, and another– until finally there is justice and peace for Darfur’s people.”