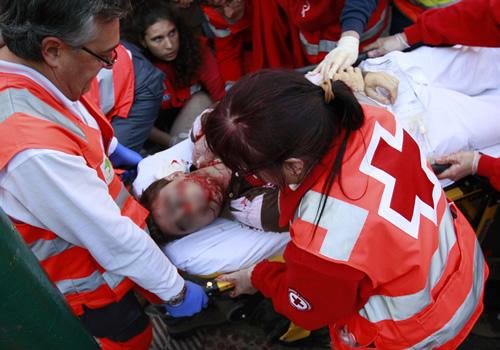 It was the first Festival death caused by goring since 1995.

We hoped we wouldn’t be reporting this type of news during this year’s San Fermin Festival, especially after announcing the launch of www.bullrunning.com, a website launched prior to the 2009 bull run that provides planning and safety tips for runners.

However, the Pamplona newspaper Diario de Navarra, reported on Friday morning that 27 year old Daniel Jimeno Romero was gored in the neck and died from his injuries.

An eyewitness recounts the event in this video:

Jimeno Romero had run in the festival since he was 20.

Capuchino, the bull that killed Jimeno Romero, gored three other runners in one of the wildest runs in recent memory. A total of 11 runners were transferred to a local hospital for wounds sustained by bulls according to the newspaper.

Pamplona isn’t the only city that has a bull running festival. Mompox, Colombia, home to Matador contributor Richard McColl, also has an annual bull event, which you can read about here.