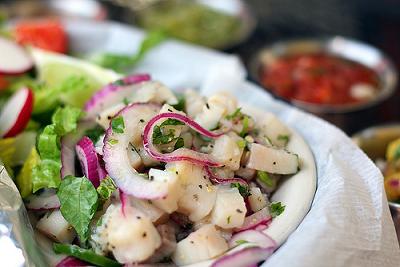 You don’t hear as much about Guinness these days, but just in case you were worried that the book has faded into obscurity, fear not:

Peru just won the title for the World’s Largest Ceviche, earning it a place amidst the pages of the next Guinness Book of World Records.

The ceviche, a raw fish appetizer that is “cooked” in citrus juice, weighed in at 6.8 tons, besting Mexico’s 2005 record for a 4.5 ton ceviche.

It took 450 students hours of work in an open-air stadium to squeeze limes, shake salt, and chop onions and aji peppers.

And once they were done?

The line of folks wrapped around the stadium each got a plateful of the ceviche that might just put the Peruvian town of Callao on the map.

What’s your favorite Guinness world record? Share your thoughts below.