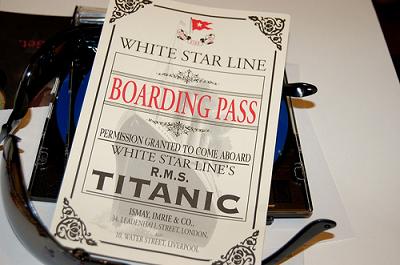 A segment on the local news caught my attention the other night:

The last living survivor of the Titanic, 96 year old Millvina Dean, is auctioning off “mementos of the disaster to help pay her nursing home fees.”

Dean, who was two months old when the Titanic sank, was crossing the Atlantic with her family, who planned to relocate in Kansas City, Missouri. Though her father died, Dean, her mother, and her brother were all rescued. Almost a century later, Dean still owns mementos of the ship and the aid her family received after the disaster.

The mementos include a wicker suitcase, “rare prints of the Titanic, and letters from the Titanic Relief Fund offering her mother one pound, seven shillings and sixpence a week in compensation.”

They’re expected to fetch about $5,200 USD at the auction, which will be hosted by the London-based Henry Aldridge & Son today.

Though it’s sad that Dean has to sell her relics to pay for her health care (a fact that warrants a post all its own, really), it’s also a reminder to travelers: save your souvenirs. They may come in handy in your retirement years.