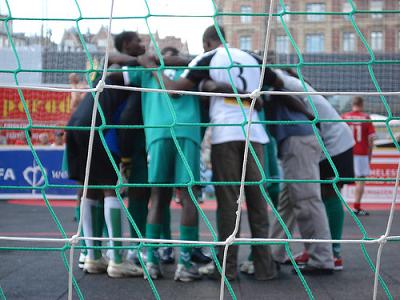 A few weeks back, Pulse co-editor Eva Holland published an article about must-see sporting events in 2008 and 2009.

I’ve got a new event to add to her list: the Homeless World Cup.

Started in 2003, the Homeless World Cup is modeled on the FIFA World Cup… but with a big and important difference:

players are homeless. Coaches from countries all over the world draft their team members from the ranks of homeless shelters and social service programs, selecting the best players to represent their countries and compete for the grand prize at the annual HWC.

The Homeless World Cup has had a profoundly positive impact on players’ personal lives; HWC organizers say that 73% of players experience turn-arounds in their lives after participating in the event: kicking a persistent drug or alcohol habit, moving into a home, starting meaningful relationships, reconnecting with estranged family members… even landing employment as pro players or coaches.

The event has also been a signficant means of exposing the problem of homelessness in the world (which has more than one billion people without a home), and motivating policy and program changes in countries where talking about homelessness has been taboo.

This year’s tournament will be held in Melbourne, Australia December 1-7. 58 teams–from Afghanistan to Zimbabwe–will be competing. If you’re in Melbourne, make plans to catch at least one game– unlike the FIFA World Cup, the HWC is FREE.

You can also volunteer at one or more of the matches; information about volunteering can be found here.

If you won’t be in Melbourne, though, consider supporting HWC’s important work. You can join the HWC Fan Club, buy an HWC t-shirt, or follow HWC on Facebook.

You can also support Matador and HWC simultaneously by purchasing the DVD, Kicking It

which is an inspiring look inside the HWC selection process and tourney.

Big up to HWC organizers and players- what other world event is so exciting AND so purposeful at the same time? Score!

Tagged
Outdoor Music + Nightlife
What did you think of this story?
Meh
Good
Awesome

For the perfect day of hiking and Colombian coffee, head to Jardín This epic new film ‘Breathtaking’ follows climbers on the world’s most dangerous mountain: K2 England is opening the world’s longest coastal path. Here’s how to plan your walk. 9 of the clearest waters in the US to go wild swimming The Jordan Trail: Hiker’s guide to crossing the country in 40 days and 40 nights

The 10 commandments of attending a live drag show

The time to sing from our balconies is upon us. These are the songs to sing.