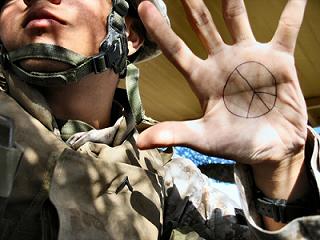 Regardless of your feelings about The War, you can’t help but be affected by a series of fine arts photographs taken by enlisted combat photographers serving in Afghanistan and Iraq.

In a recent interview with Newsweek, curator Dane Jensen explained that he wanted to use photographs to tell stories about the war that aren’t being told by mainstream media.

The photos in “Eye of the Storm,” an exhibit of the photos that opened this past Friday at the Reform Gallery in Los Angeles, require the viewer to “read the back story” of the images, each of which portrays “small moments” not typically seen.

See 12 of the images from the exhibit, and leave a comment: What do you think about the act of turning war into fine art?

Photo: Jayel Aheram
*For more photos from the war, check out Jayel Aheram’s photostream on Flickr.

What did you think of this article?
Meh
Good
Awesome
Bookmark
Posted In
Activism Photo + Video + Film