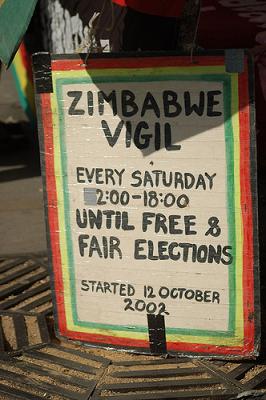 A few months back, I noted that Botswana’s government had broken ranks with the other African nations by refusing to recognize Robert Mugabe’s “victory” in the latest round of Zimbabwean elections.

This week, we have the latest sign that some African leaders have had enough of Mugabe and his destructive governance:

Kenya’s Prime Minister speaking out in the harshest language yet by a leader from the continent.

“It’s time for African governments… to push him out of power,” the BBC quoted Prime Minister Raila Odinga as saying, in response to the ongoing political turmoil in the country.

“Power-sharing is dead in Zimbabwe and will not work with a dictator who does not really believe in power-sharing.”

“I do believe strongly that if the leadership in South Africa took a firm stand and told Mugabe to quit he will have no choice but to do so.”