When you board a train in Hawaii, you don’t travel very far. A beautiful beach, orchards filled with tropical fruit trees, taro paddies, and fields of pineapples are among the vistas you might survey on excursions that traverse just a few miles. But you will be traveling back in time: Hawaiian trains were central to the islands’ history, one that made Hawaii the multicultural place it is today. They also played a key role in the US’s World War II efforts in the Pacific. For a look back as you locomote forward, hop onto one of these historic Hawaiian train cars.

A history of trains in Hawaii

“There were railroads on all the major islands. On many of the islands, there were quite a few. They all originally started based on sugarcane,” said Steven Vendt, Director of Operations and Special Projects for the Hawaiian Railway Society, which runs its trains on the last original railway tracks on Oahu.

The first tracks used to haul sugarcane were laid down in 1881 on the island of Kauai. By 1915, Kauai had over 200 miles of track. On Oahu, the first tracks appeared in 1889, set by the Oahu Rail and Land Company — which provided the link between plantations and the port.

“The plantations would have taken their sugarcane from the fields and brought it to the mill where it was processed. The processed sugar would have then gone on trains to the Oahu Railway, which would have ended up at the port in Honolulu,” said Vendt.

Hawaii’s history wasn’t always pretty; the first European arrivals brought devastating diseases and the US illegally overthrew the Hawaiian monarchy in 1893. But the multicultural islands you experience today are a result of this turbulent story. When you savor a delicious Hawaiian poke or sweet bread, you are tasting the influences of East Asian and Portuguese immigrants who came to work on sugar cane plantations. When you bite into a spam musubi, you are taking a nibble of Hawaii’s World War II legacy — with which the Oahu railroad was also intimately entwined.

Few railroads exist or operate today. On the island of Maui, the six-mile-long Sugar Cane Train operated by the Lahaina, Kaanapali and Pacific Railroad was a popular attraction. But years of efforts to revamp and reopen the railroad failed, and it is now permanently closed. If you want to grasp onto a slice of history, check out the train rides below.

The Hawaii train rides you can book on Oahu and Kauai

Benjamin Dillingham first came to Hawaii as a sailor and decided to stay. After establishing the Oahu Rail and Land Company and securing a charter from King David Kalakua in 1888, he started to build out the tracks. Dillingham’s company became the most important railway on Oahu and served an essential role during World War II — but developments during that war also brought an end to the railway.

“The old Oahu Railway ran all over the island until the end of 1947. After World War Two, trucks, buses, cars, roads, just like on the mainland, started to take more of a precedence,” said Vendt. The non-stop transport of heavy equipment on the railway lines over the course of the war also took its toll. “The trains were pretty well beaten up. Dillingham could see the writing on the wall.”

Dillingham closed much of the railway, limited its operations to near the ports, and the army took over other portions. After this time the Hawaiian Railway Society formed, initially with the aim of saving a locomotive engine from the Waialua Agricultural Company on Oahu’s north shore.

Eventually, the Society also took over the railroad tracks that the army had abandoned — along with three of its locomotive engines: two from the Navy and one from the army. It also got this stretch of railway placed on the National Register of Historic Places.

Today, Hawaiian Railways takes guests on a 90-minute train ride from Ewa Beach near Pearl Harbor to a beautiful beach on the Nanakuli Coast, a short jaunt from the Lualualei Munitions Depot. The train stops for ice cream at the end, where guests can walk out, stretch their legs, and enjoy the views. The addition of the ice cream stop helped boost the popularity of the trains, which run on Sunday, Saturdays, and Wednesdays — largely for locals.

“It’s about 70 or 80 percent locals. It has always been that,” said Vendt. While the Internet has made it easier for visitors to discover the train, it remains solidly popular for Oahu residents. When Vendt and his wife thought up the idea of offering pre-Christmas holiday rides, complete with milk and cookies, 1400 seats sold out in one day, he said.

Vendt says the train ride is a unique, inexpensive thing to do and the narration provides historical context. In fact local grammar schools have long brought kids on tours of the train. “What draws people? Part of it is history. Obviously people really enjoy the views at the other end of the line,” said Vendt. Also, he said it’s become a tradition in Hawaii.

“There was a lady that came and wanted to have her daughter’s fifth birthday at the railroad,” said Vendt, explaining that birthday parties at the train are pretty common — since Hawaiian Railway has a picnic area and celebrants get their own train. But, he added, “The reason the mom wanted to do it was because she had her own fifth birthday there.”

Trains depart Wednesdays at 1 PM, Saturdays at 12 PM and 3 PM, and Sundays at 1 PM and 3 PM. (Note, the Sunday 1 PM train does not include the ice cream stop). Rides cost $15 for adults, $10 for children aged 2 to 12, and $10 for seniors. For more information, visit the Hawaiian Railway Society’s website. 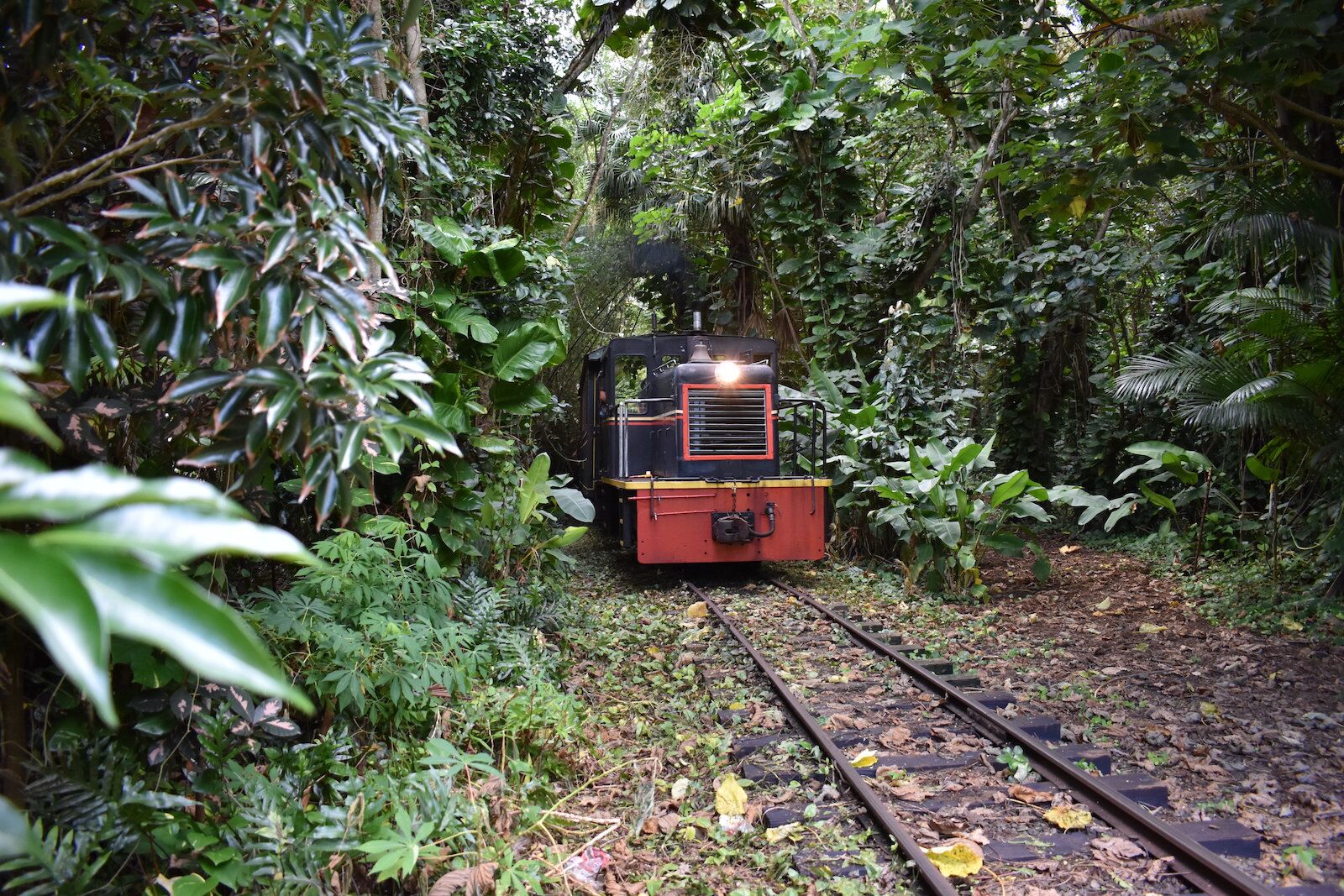 The Kauai Plantation Railway tours the Kilohana Plantation on Kauai’s east side. The trains travel in a figure of eight over 40-minutes during a narrated tour of the 105-acre plantation. What you’ll see from your mahogany-paneled train car, however, is not sugarcane, but instead more types of fruit than you would spot at your local farmers’ market.

“We operate these electric locomotives, which basically, were the last type of locomotives used before everything went to trucking,” said Nick Atkins, General Manager of Kauai Plantation Railway. The train travels past, “fields of banana, papaya, Native Hawaiian hardwoods,” as well as multiple taro fields — which in Hawaiian are called “lo’i.”

As Atkins tells it, this resulted in the creation of a 67-acre agricultural park with 44 rows of fruit trees alone — with each row home to a different type of tree fruit. “We might have four rows of mango, but each row is a different variety of mango or lychee or longan or canistel or acerola cherry or jabuticaba, rambutan, mamey sapote…,” said Atkins.

As tasty as they are, mangoes and cherries were not to be the answer. “Times have changed since then. Large scale farming on Hawaii is not very cost effective no matter what you’re planting,” said Atkins.

So the Kauai Plantation lives on by offering visitors a chance to eat on site, attend a luau and, of course, ride a train through its property. In addition to all the fruit trees, the farm grows eggplant, okra, peanuts, ginger, and, more recently, hemp for CBD. It also has pasture land with cattle and horses and donkeys and pigs.

“It’s a 40-minute tour. So we stop the train for about 10 minutes, and let our guests disembark to feed our animals,” said Atkins. “The animal feeding is fun pretty much for everybody. Everybody gets a hoot out of feeding the pigs.”

There’s also an alternative train ride bundled with a nature walk, “where the guests get to take the train out and then disembark and walk through the orchards and pick and taste the fruit off the trees.”

The Kauai Plantation Train departs on the hour daily from 10 AM to 2 PM, with two additional afternoon trains on Tuesdays, Thursdays, and Fridays. Rides are $20 for adults ($14 for residents), $14.50 for children aged three to 12 ($10 for resident children), and $17.50 for seniors. A train-plus-lunch option is $88.50 for adults and $68.50 for children, and includes a walk through a Native Hawaiian forest, international hardwood forest, and banana patch — plus an alpaca encounter. For more information, visit the Kauai Plantation Railway’s website.

Like the Kauai Plantation Railway, the Dole Plantation, located in the middle of the island of Oahu, offers a train trip through plantation history. In this case, the Dole Pineapple Express Train Tour takes you in smaller replicas of historic trains. The two-mile ride lasts just 20 minutes, and you’ll travel past fields of pineapples, as well as other highlights like banana trees and other broad-leaved foliage.