There aren’t a lot of roads to choose from on Vancouver Island, if you don’t own a four-wheel drive. Dusty, bumpy logging roads dominate much of the Island, which stretches 460 kilometers (290 miles) in length and is located off Canada’s West Coast, with some of the most rugged and beautiful scenery in the country. Fortunately, the few roads that are paved make for magical road trips.

Editors note. All images are authors own.

This is a road definitely worth doing. The trip starts with a visit to the province’s vibrant capital, Victoria, which has great restaurants, colorful buildings and plenty of charm. Head west on Highway 14. Shortly after leaving the town of Sooke, the road starts hugging the ocean, offering panoramic views of the Strait of Juan de Fuca and Washington’s snow-capped Olympic Mountains. You’ll pass by a few artisans, hobby farms and the odd café before the narrow, uneven road starts twisting and turning to the point of making car passengers nauseous. 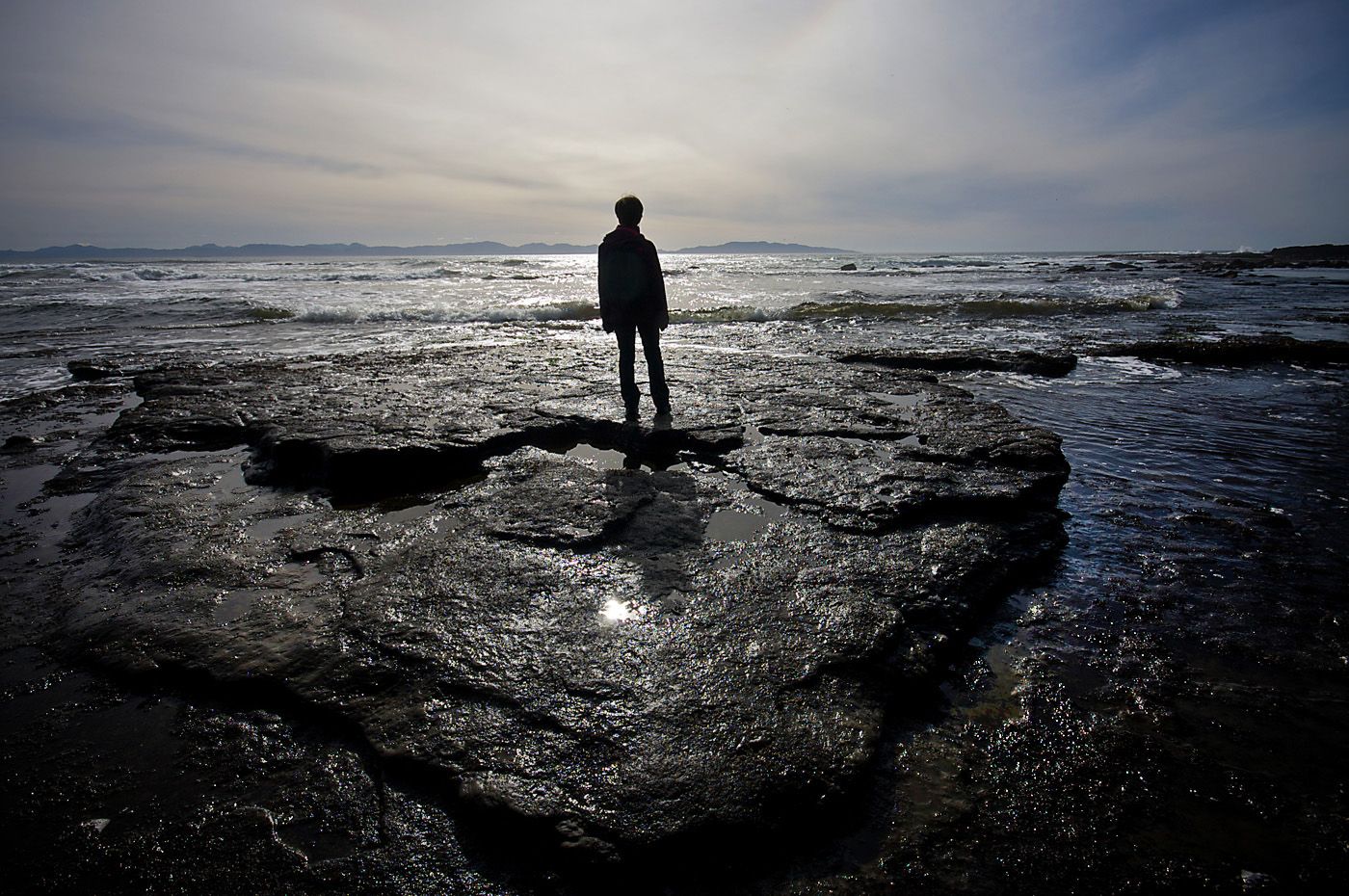 Before this happens, however, there are two provincial parks worth a brief stop at — China Beach and French Beach. China Beach marks the start of the rugged Juan de Fuca Trail, which stretches 47 kilometers (29 miles) along the southern coast, and has a handful of access points along the highway that can be hard to spot if no vehicles are parked there. The road gets really gnarly around the Sombrio Beach access point as it passes through ravines filled with ferns and small creeks. The road ends at Botanical Beach, known for its tidal pools, which is always an interesting place to spend a few hours no matter how old you are. Note: there is no gas station in Port Renfrew (just before Botanical Beach) or any other services after Sooke.

You know you’re in for an interesting drive when you start in a village that has live goats on the roof of a local business, then end up on a highway that feels like it’s trying to merge with a lake. The drive from Coombs to Tofino is arguably the most scenic on the Island, and is also the most popular, so brace yourself for a slow crawl behind a parade of motorhomes until you reach your final destination. The drive hugs the shores of pristine Cameron Lake before heading into a forest full of old giant fir and cedar trees draped with moss in Cathedral Grove. Once out of the forest, there’s an impressive view of Mount Arrowsmith before arriving in Port Alberni — a small, bustling lumber and fishing city located at the head of the longest ocean inlet on Vancouver Island. Shortly after Port Alberni, the road takes a page from its southern cousin; turning into a narrow, uneven route packed with twists and turns as it snakes through the Island’s mountainous interior, following the Kennedy River. There are no services until you reach the junction for the two ocean-side towns of Ucluelet or Tofino, which are located 40 km (25 miles) apart from each other. 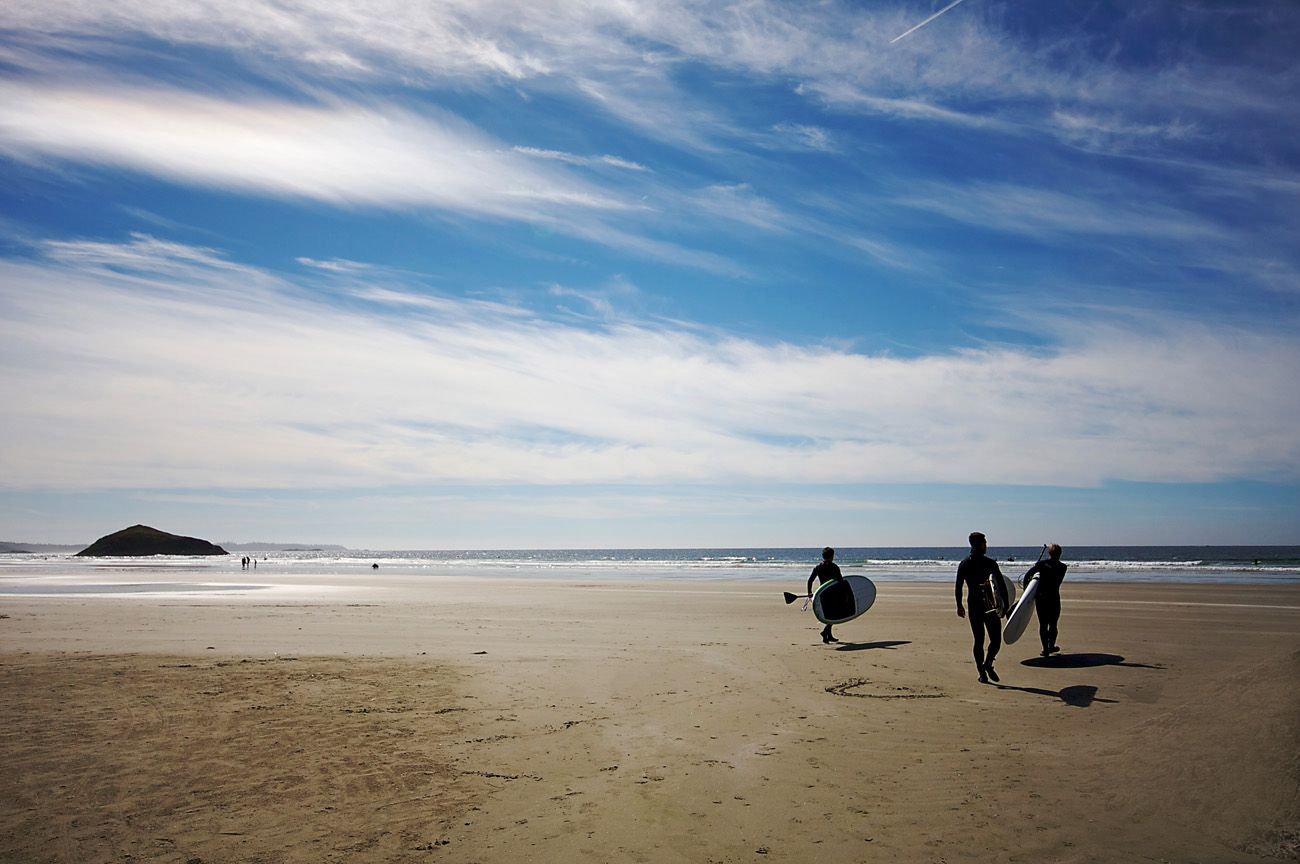 The road to Tofino — a sleepy surfing town known for its wild, picturesque setting at the end of a peninsula within Clayoquot Sound — goes through Pacific Rim National Park, providing sweeping views of sprawling white sandy beaches being pounded with waves.

Known as the salmon capital of the world, the small City of Campbell River turns into a frenzy of fishing activity during midsummer to late fall as hundreds of thousands of salmon come home to spawn. It’s also the gateway for exploring the remote towns/villages on the north coast, where life revolves around fishing and logging, and there aren’t many crowds. From Campbell River, the highway passes by Seymour Narrows — a 5 km section of the Discovery Passage, which is known for its turbulent tidal currents. Hike the Ripple Rock trail to get a closer look at where the largest non-nuclear explosion in the world occurred in 1958. Shortly after, the road plunges into complete wilderness for most of the way, passing through thick forests that occasionally offer views of the mountains, lakes and a few hiking trails scattered in between. 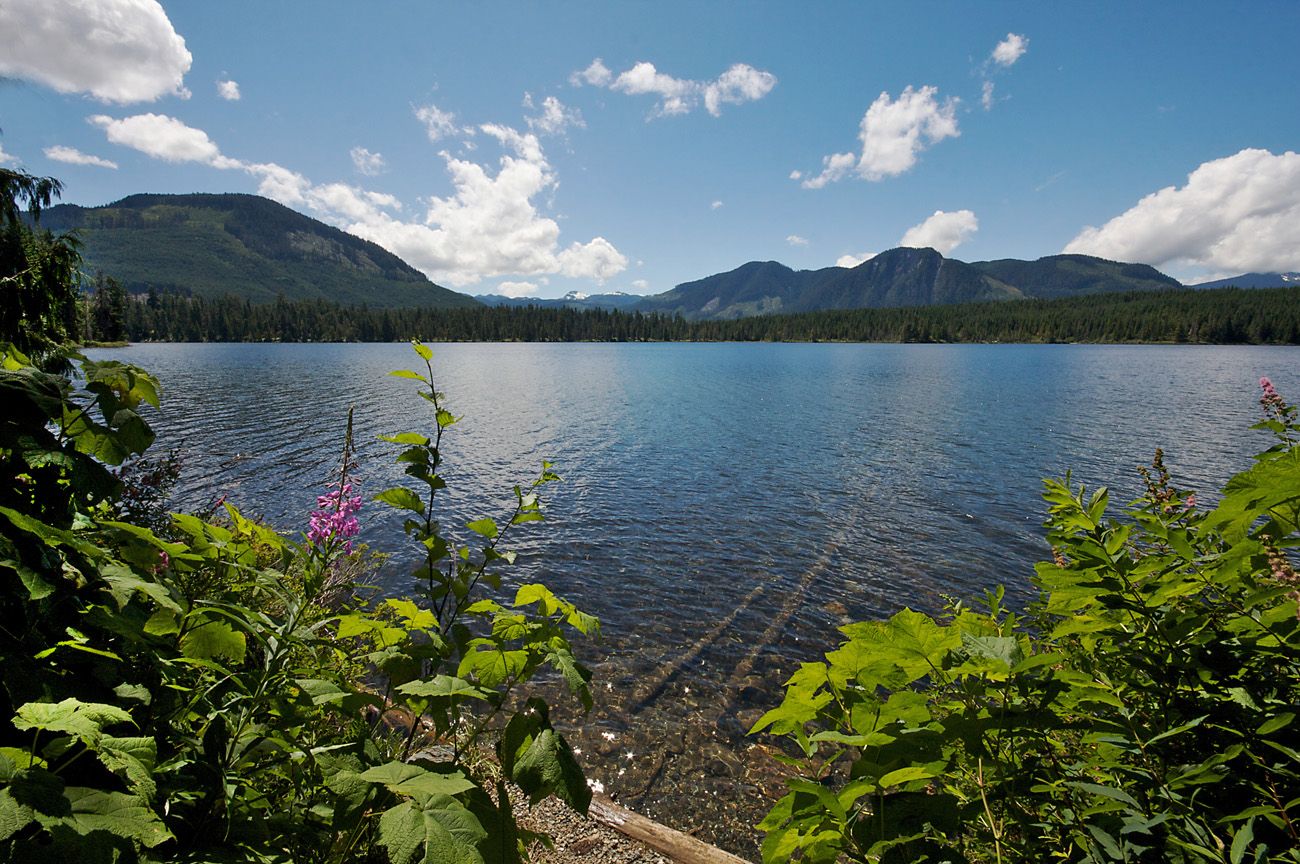 It’s hard to believe sometimes you’re still on an island until you reach the small coastal towns of Port McNeill and Port Hardy on the northern tip, where First Nations culture still abounds. Port Hardy is the gateway to the 43-km (26 miles) North Coast Trail in Cape Scott Provincial Park, which involves a 63-km (40 miles) drive on a rough logging road to get to. The town is also the launching point for travelers taking the ferry to the handful of remote communities on the mid and northern coasts of B.C., but it comes with a hefty price tag. Note: The ocean off the north coast come alive in the fall when the water is bombarded with humpback whales readying for their winter migration to Hawaii.

This road trip is for those wanting to get out into nature and off the beaten path without having to ever venture very far from their vehicle. From the moment you leave Campbell River, travelers are presented with a variety of hiking trails in Elk Falls Provincial Park and Strathcona Provincial Park, which was designated in 1911, making it the oldest provincial park in the province and the largest on the Island. The park encompasses a large chunk of the interior and is known for its challenging long-distance hikes, waterfalls, glaciers and lakes. There are no commercial tourist facilities in the park itself, aside from the nearby Strathcona Park Lodge on the shores of Upper Campbell Lake, which the highway meanders beside for part of the journey. After the lake, the highway veers through small mountain valleys before arriving in the quiet village of Gold River. 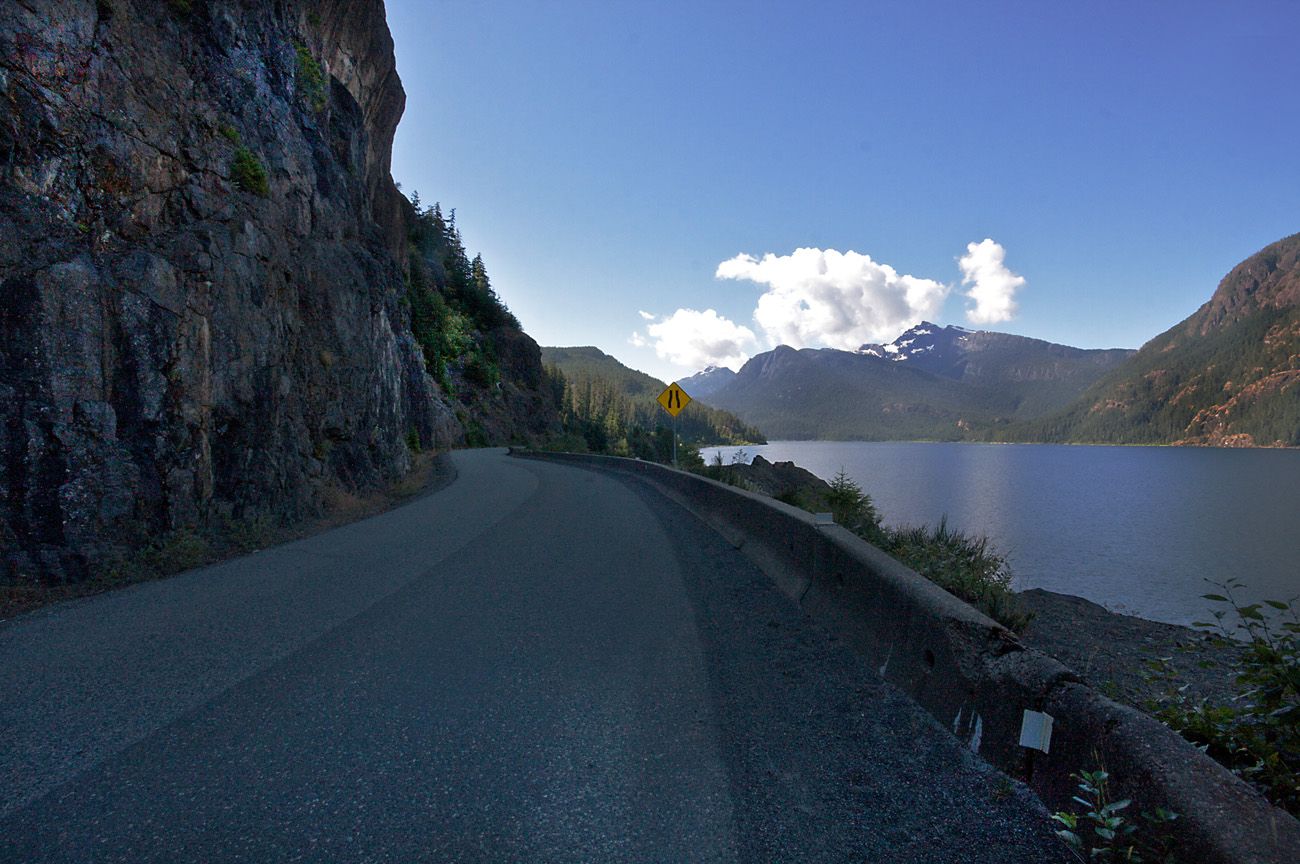 Head west towards Tahsis to explore the Upana Caves or drive 15 minutes south to the Muchalat Inlet, where travellers can take a cruise on the MV Uchuck to other tiny islands and remote First Nations communities.

If you like being where all the action is, then this is the road trip for you. The bulk of Vancouver Island’s million or so residents live on either the south or east coast, which has warm ocean water temperatures for swimming and views of the Strait of Georgia with the Coast Mountains in the distance. After the small City of Courtenay, one of three communities in the Comox Valley (known as the oyster capital of Canada), the highway passes by a string of hobby farms selling produce, a wide variety of artisans, cafes, pubs advertising fish and chips, resorts and sleepy villages hugging the ocean shore. 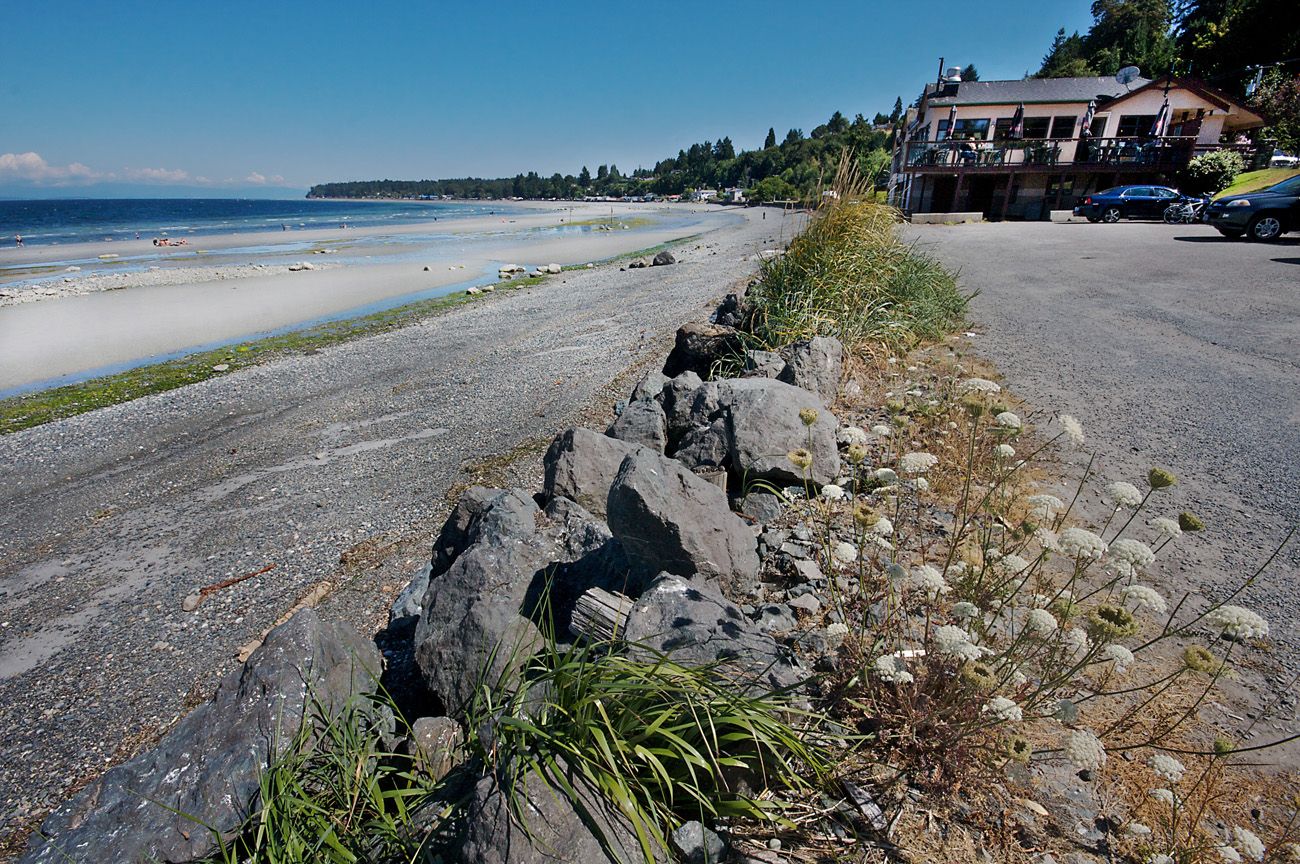 You’ll soon arrive in the bustling community of Qualicum Beach, which has a busy promenade along its sprawling beach which often draws big crowds on hot days. If you like beaches, then continue heading 10 minutes south to Parksville and check out the community beach and Rathtrevor Beach, which has one of the Island’s most popular campgrounds. Among the long list of tourist attractions in the area is the Craig Heritage Park Museum (next to the tourist information center), which shelters eight historic buildings and 2,000 pioneer artifacts. The oldest building dates back to 1888.

This road trip isn’t located on Vancouver Island, but it’s too close and fun not to mention. Located just off the Island’s southeast coast, the Southern Gulf Islands vary in size and population and are known for their artists, wineries, small farms and friendly, laid back locals often found hitchhiking to get from Point A to Point B. Salt Spring Island is the largest (70 square miles or 180 square km) and most populated (10,500 people) of the Islands and can be accessed by ferry from Vancouver Island at Swartz Bay or Crofton. The ferry from Swartz Bay takes travelers to Fulford Harbour. From here, take a right on Beaver Point Road and follow the signs to the Salt Spring Island Cheese Company to sample many unique flavors of goat cheese. 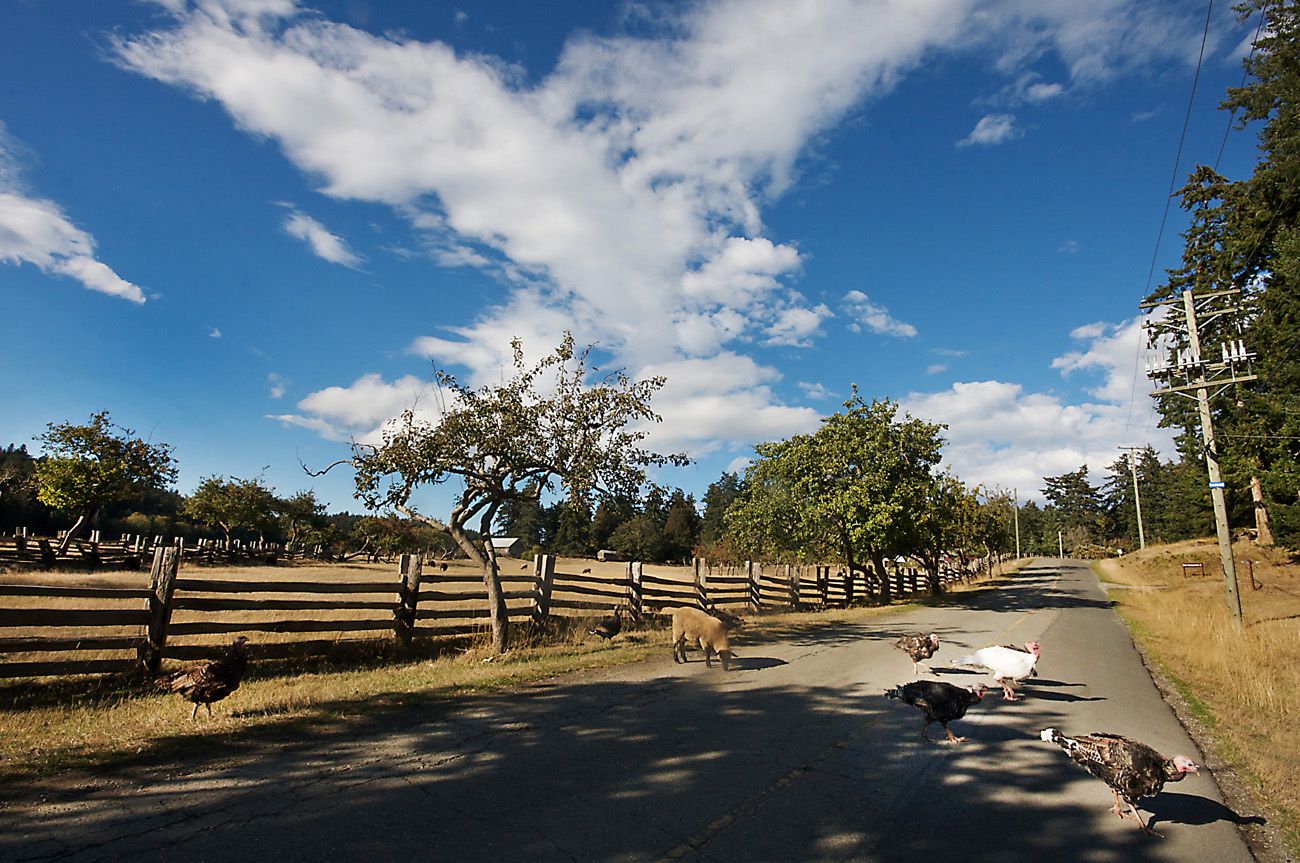 Head back onto Beaver Point Road and follow it until the end at Ruckle Provincial Park, which has more than 15 km (9 miles) of hiking trails and a campground in a grassy meadow overlooking Swanson Channel. From here, head back onto Beaver Point Road to Fulford Harbour and take Ganges Road, which is packed with farm stands and various artisans. There’s also a craft beer brewery and two wineries worth taking a stop at for a tasting. Before you reach the colorful village of Ganges, follow the signs to the viewpoint at Mount Maxwell Provincial Park. The road to the peak is steep, narrow and bumpy but offers a series of viewpoints overlooking the Fulford Valley, Burgoyne Bay and Vancouver Island.

Tagged
Travel Trip Planning Vancouver, Canada
What did you think of this story?
Meh
Good
Awesome

How to save money on your trip to Vancouver