There is no shortage of natural wonders at Yosemite National Park, but for two weeks in February, the “firefall” steals the spotlight.

Horsetail Fall is a small waterfall located on the eastern edge of the El Capitan mountain in the Yosemite Valley. Every year, from mid to late February, when the fall is flowing, it takes a beautiful and bright orange glow at sunset. The striking phenomenon gives the impression that lava is flowing down the mountain. For a true firefall to take effect, however, there need to be clear skies and enough snow to allow water to flow, so plan your visit accordingly. 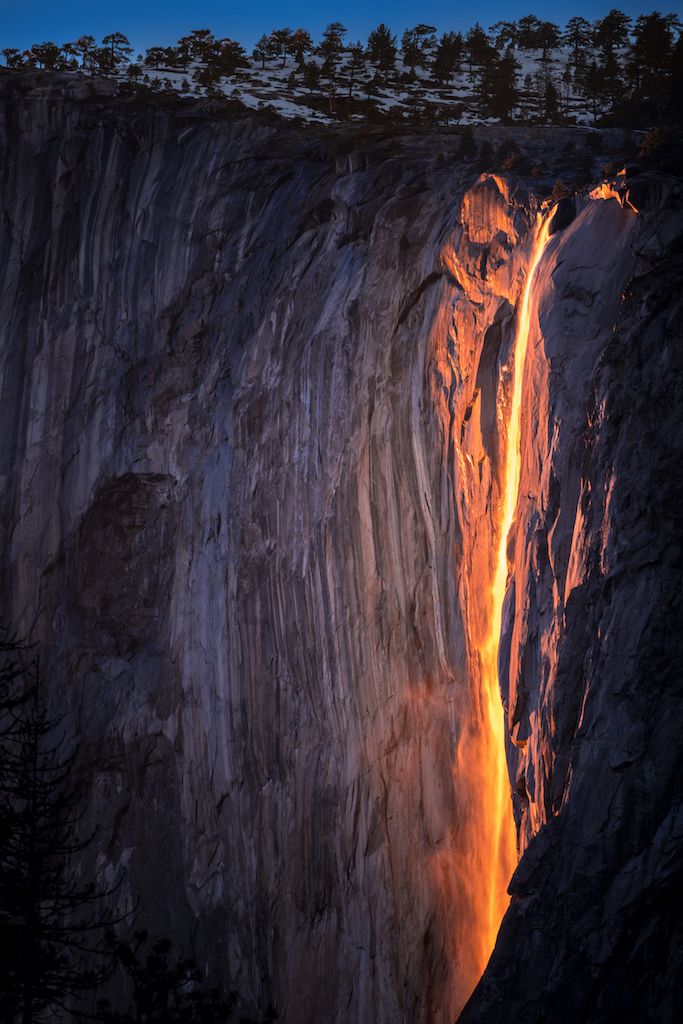 This year, the firefall will be visible between February 13 and 25, and unlike previous years visitors will need a reservation to enter the park. Due to COVID-19 restrictions, a new online reservation system is in place for day passes to the park, starting February 8 and extending through February 28.

Since the closest parking options are in the Yosemite Falls Parking near the Yosemite Valley Lodge, you should be prepared to hike at least 1.5 miles from your car to the nearest viewpoint (each way). It’s also important to stay up-to-date on Yosemite’s COVID-19 rules, which vary frequently and could affect park hours, viewpoint access, or your ability to visit.

The term “firefall” was first used to describe a practice that occurred at Yosemite’s Glacier Point as early as 1873. Campfires built for guests near the edge of Glacier Point, where the Glacier Point Hotel used to stand, were pushed off the edge, creating the illusion of a stream set ablaze. That practice has since been outlawed, however, for safety reasons.

A version of this article was previously published on January 30, 2020, and was updated on February 2, 2021, with more information.

How to visit Boundary Waters, the most jaw-dropping paddling destination in the US