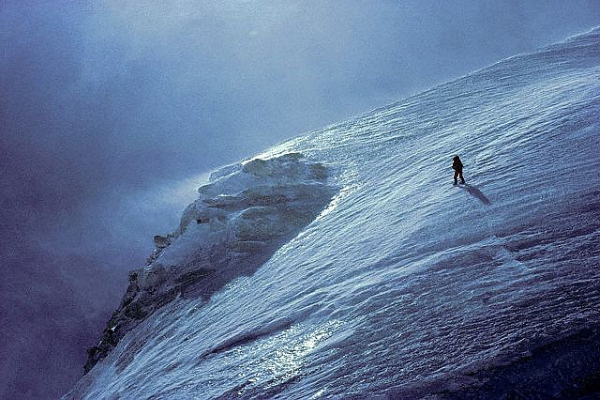 In 1953, a team of eight American mountaineers was stuck on K2 in the middle of a blizzard, when one of its members, geologist Art Gilkey, collapsed with a pulmonary embolism.

While most Himalayan mountaineers would leave behind a climber too incapacitated to move, the rest of Gilkey’s team decided to try to get him off the mountain. They began descending the mountain, lowering Gilkey, wrapped in his sleeping bag, ahead of them. Suddenly, one climber lost his footing and began sliding down the side of the mountain. As he fell, he snagged on two other pairs of roped climbers, pulling them down with him.

The team would have fallen to their deaths if Pete Schoening, who had been belaying Gilkey, hadn’t caught them. In one of the most impressive shows of strength in mountaineering’s history, Schoening managed to hold onto the rope, stopping the climbers’ fall and belaying five of them to safety. The only casualty was Gilkey, whose rope snapped in the fall.

Later in life, Pete Schoening narrowly avoided another disaster when he dropped out of a Mountain Madness expedition to Mt. Everest due to poor health. His group would be one of those caught in the 1996 Everest Disaster, made famous by the book Into Thin Air.

2. Rescued from an underwater cave

Underwater caves are one of the most hazardous environments for divers. They’re dark, disorienting, and far from the safety of the surface. Most experienced cave divers have participated in a body recovery at some point, but very few have ever brought back a live diver.

Of those few, Steve Gerrard probably has the best story. In 1991, Gerrard participated in the rescue of a diver named Gustavo Badillo, who had become lost deep in Riito de Acarite, a flooded cave system in the mountains of Venezuela. With no backup equipment or cave diving training, Badillo was stranded in an air pocket, and facing what must have seemed like a very brief, very unpleasant future.

Gerrard was in Florida when a friend of Badillo’s contacted him to ask for his help in the rescue. While Gerrard didn’t expect that Badillo would survive, he agreed to come, and he and partner John Orlowski packed up their gear and hopped a chartered flight to Venezuela.

Incredibly, Badillo was still alive when the pair reached him the next morning, 36 hours after he had ventured into the cave.

Tommy Caldwell is famous for his big wall climbs in Yosemite, but he faced a whole new kind of danger in 2000, when he, then-girlfriend Beth Rodden, and two other friends were taken captive by armed rebels while on a climbing trip to Kyrgyzstan.

While their captors acted friendly, the climbers found out from another prisoner, a Kyrgyz soldier, that the rebels were dangerous, and had killed before. If Caldwell and Rodden had any doubts, they were extinguished when the rebels took the soldier behind a rock and executed him.

After spending six days on the run from Kyrgyz army patrols, the climbers saw their chance when the rebels left them on the edge of a cliff, with only a single guard watching them. In an interview, Caldwell recounted what happened next:

So I ran up behind him and grabbed him by his gun strap and pulled him over the edge. We were probably about 2,000 feet (610 meters) above the river, but it’s a cliff that is pretty sheer. We saw him fall 20 feet (6 meters), bounce off this ledge, and then fall basically into the black abyss below. I totally panicked. I broke down. I couldn’t believe I’d just done that, because it’s something that I never morally thought I could do and I never wanted to do. And Beth came up and, you know, gave me a lot of comfort as well as Jason and John.

After overpowering their guard, the four fled, finally finding their way to Kyrgyz army camp several hours later. Back in the US, Caldwell is still climbing, and is now working on freeing a new line on El Capitan, Mescalito.

4. Four days in the caverns 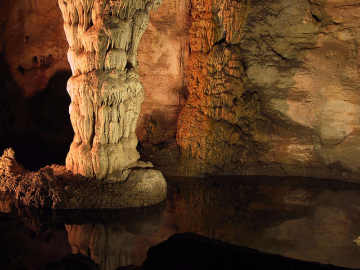 Discovered in 1986, Lechuguilla Cave is a 55-mile system of hundred-foot-high cliffs and intricate limestone formations that penetrates deep into Carlsbad Caverns National Park. The system isn’t fully mapped, and cavers have been surveying it for decades.

Emily Davis Mobley was on a multi-day expedition to the cave in 1991 when a falling boulder hit her, shattering her leg. While the team doctor stabilized her bone and treated her for pain, Mobley was still left unable to move. Getting her out would entail one of the largest cave rescues in history.

For over four days, dozens of cavers worked to get Mobley out, sometimes as much as 16 hours a day. In some tight passages, rescuers had to get on all fours and pass her stretcher over their backs.

Mobley managed to stay in good spirits throughout the rescue, sometimes entertaining the people carrying her stretcher with renditions of songs like “Jeremiah Was a Bullfrog.” The effort succeeded in the end, and Mobley was evacuated to a medical center in Carlsbad.

5. Walking off a chopper crash

Dave Hahn has received awards for the many rescues he has performed on Mt. Everest, Denali, and other peaks around the world. One of his most epic took place in 2002, when the helicopter that was carrying him and ranger Chris Olson to rescue an injured climber crashed on Mt. Ranier.

Most people would have stopped there, but Hahn and Olson told rangers by radio that they planned to complete the rescue. After evacuating the helicopter’s pilot, Hahn and Olson continued up the mountain on foot. Along with four other rescuers, the pair stretchered the victim partway down the mountain, where an army helicopter picked them up.

This picture nearly got its photographer killed

5 heroes working to empower women around the world