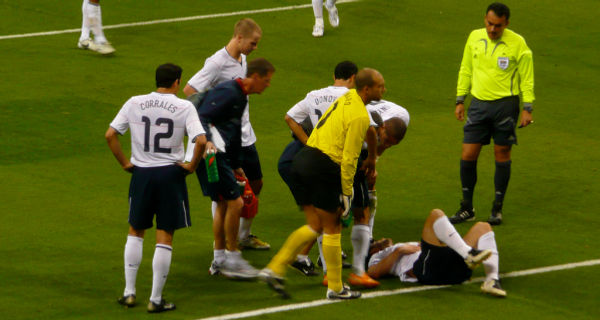 2-0 upset is the first US win against top-ranked team since 1998, but challenging final lies ahead.

AFTER ALMOST GETTING KNOCKED out of the group stage, the fact that the US made it to the Confederations Cup semi-final was surprising.

When it came to Wednesday’s match against first-place Spain, many people doubted the US’ chances. As US midfielder Landon Donovan told Europe News before the match in Bloemfontain, South Africa: “I don’t think many teams go into a game against Spain thinking they’ll win.”

But yesterday the US surprised everyone by beating Spain 2-0, ending their 35-game unbeaten streak. Jozy Altidore and Clint Dempsey both scored to advance the US men to their first-ever FIFA final.

The US will face either South Africa or Brazil in Johannesburg on Sunday. If the heavily-favored Brazilians advance, the Americans will face the defending champions, who defeated the US 3-0 during group play.

For now, however, the US players are still trying to figure out what happened. After the match, goalkeeper Tim Howard told press that he was as baffled by the victory as everyone else.

“I can’t explain it any more than you can,” he said.

See Wednesday’s match broken down in this highlight reel from the CBC:

What does Wednesday’s victory mean for US soccer? Sound off in the comments section below!