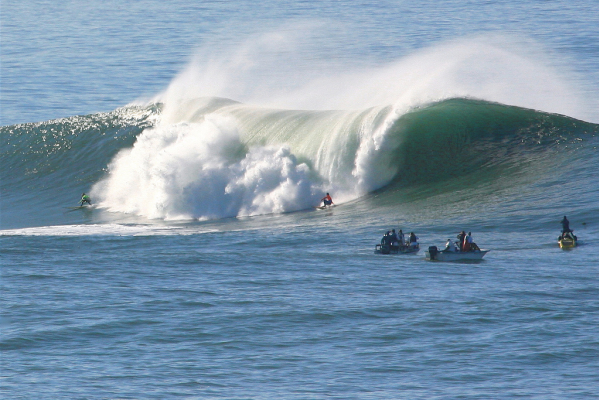 Twenty-four of the world’s top surfers are gathering at Half Moon Bay in California after voting to hold the Mavericks Surfing Contest this Saturday for the first time in two years.

HELD ON THE OFFSHORE break of the same name, Mavericks is one of the world’s most famous big wave surfing competitions. The contest is called at 24 hours notice, and can fall anytime during a November to March “watch period”, as long as waves reach at least 20 feet.

The official green light went up on Mavericks’ website on Thursday afternoon. The invited surfers now have until 7 AM Saturday to get to the Mavericks break. Heats start at 8 AM local time, with finals planned for 1:30 PM and a trophy ceremony for 3 PM. The surfers will be competing for a $150,000 prize purse, the highest in Mavericks’ history.

Forecasts for Saturday predicted 20 to 30-foot waves, far shorter than the 50-foot swells that have occasionally hit Mavericks in the past. Still, some surfers said they were worried that high winds from a late-breaking storm on Saturday would make the break more dangerous than normal. In Thursday’s vote, 5 of the 24 surfers voted against calling the contest.

“People should know that this isn’t going to be anything like the last two contests, when it was sunny and beautiful with big sets every few minutes,” Greg Washburn, who cast one of the “no” votes, told the San Francisco Chronicle. “This is going to be big and wild, with giant waves breaking all over the place.”

“Hey, I’m fine with going out there. We’ll really see who’s who. But it’s the kind of day we’re not sure about. It could be sketchy.”

Over 50,000 spectators showed up at Mavericks in 2008. For surfing fans who can’t make it, the contest will be broadcast live at San Francisco’s AT&T Park and streamed online.

What did you think of this article?
Meh
Good
Awesome
Bookmark
Posted In
Surfing