Nearly 40% of convicted felons serving time are arrested and sent back behind bars within three years of their parole. Once convicted of a felony, parolees often serve their sentence for the rest of their lives due to few chances at gainful employment. Vick, on the other hand, stands to rise from the ashes of a felony conviction and return to super stardom. That’s one hell of a come-from-behind story, but one without a hero. 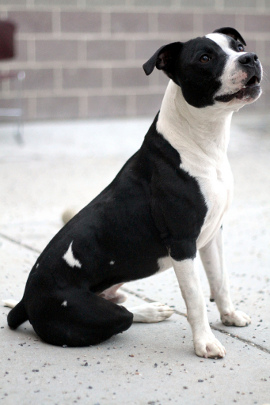 After reading about Vick’s participation in the killing of “under-performing” dogs by shooting, drowning, or hanging, there’s nothing that could redeem his actions in my mind. The best that he can hope for is to continue to pay with his talents and actively work to prevent animal cruelty. He’s making all the right overtures. I am just not convinced of his sincerity.

Vick is currently speaking to young men and women in urban areas to urge them not to be like him. He’s also working with the Humane Society of the United States’ End Dogfighting campaign. The Philadelphia Eagles, Vick’s current employer, launched Treating Animals With Kindness and donated $50,000 to HSUS. Vick has not made any monetary donations personally, perhaps it’s because he still owes money due to filing for bankruptcy.

For dogs, a bleak future

Unlike Vick, the canine victims continue to really suffer. While some are successfully completing rehabilitation programs, the harsh reality is that some of these dogs will never be adopted, and will continue to suffer the affects of abuse years later.

For all of this, the Philadelphia Eagles and NFL continue to allow Vick to atone for his transgressions. The fans show an uncanny ability to separate the athlete from the man by filling those seats and looking forward to another win over the Washington Redskins. As long as he’s getting six touchdowns a game, Vick will continue to be the MVP the NFL loves to hate.

It makes me wonder what would happen if Vick started “under-performing.” Would he go the way of Vince Young, whose thumb injury and attitude might just get him fired?

Football or rugby? Join the debate.