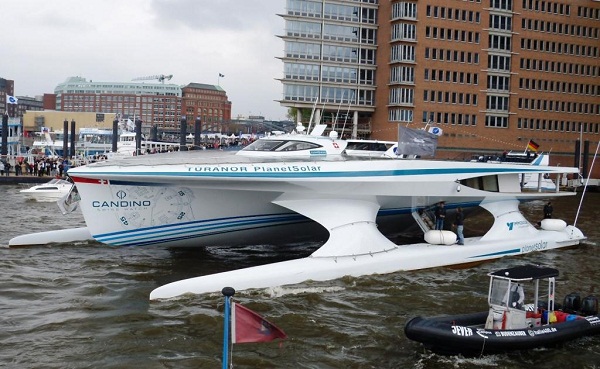 As much as I love the speed and excitement of motorsports like off-roading and speedboating, I feel like I can’t really justify burning fossil fuel and piping all those emissions into wilderness areas just for my own amusement.

As with everything in the age of green technology, however, the way we power our sports is changing. Where flying was a novelty for humans 100 years ago, this century seems to be about doing it without leaving a trail of carbon emissions behind us. These three sun-powered voyages could give us a peek into how we’ll be motoring in the future.

Considering how long humans have been using wind power to sail, building a boat that runs on clean energy doesn’t seem like much of an achievement. Still, making a sun-powered boat is a little less straightforward.

It takes some 470 square meters of solar panels and a 13-ton lithium-ion battery to power PlanetSolar, the world’s largest solar ship. The 100-foot catamaran is in the middle of a solar-powered circumnavigation of the Earth, a feat that crew members hope will inspire people to live more sustainable lives through technology.

When fully charged, PlanetSolar travels at an average speed of about eight miles per hour, so it won’t be winning any speed awards soon. The boat has a better record at endurance: as of December 8, it’s about 6,000 miles into its voyage.

An even more ambitious group of adventurers is attempting their own solar-powered circumnavigation of the globe, but by plane.

Solar Impulse is a glider-like, Swiss-built craft with solar panels plastered on the top of its wings. Unlike other solar craft, Solar Impulse’s creators designed the plane to be capable of storing enough energy during daylight hours to allow it to continue flying at night as well.

In 2012, the crew plans to make the first solar-powered transatlantic flight, after which they hope to try for a nonstop circumnavigation

The founder of the Solar Impulse project, Bertrand Piccard, has quite an adventuring pedigree as well. Besides being the son of oceanographer Jacques Piccard, one of only two people in human history to descend to the deepest point in the Mariana Trench, Bertrand Piccard is also an accomplished balloonist, who in 1999 made the first around-the-world flight in a balloon.

The plane has already made several successful test flights in different conditions, including at night.

The World Solar Challenge is an electric car race that has been taking place in Australia since 1987. Inspired by Hans Tholstrup, the Danish adventurer who in 1983 made the first solar-powered trip from Perth to Sydney, the race has participants racing from Darwin to Adelaide, traveling during daylight hours and spending nights camping in the outback.

Both university and commercial teams have one the race in the past; Japan’s Tokai University is the most recent victor. Speed hasn’t been much of a problem for these racers: their biggest obstacle now is the Northern Territory’s speed limit of 68 miles per hour.

Tagged
Outdoor Sustainability
What did you think of this story?
Meh
Good
Awesome