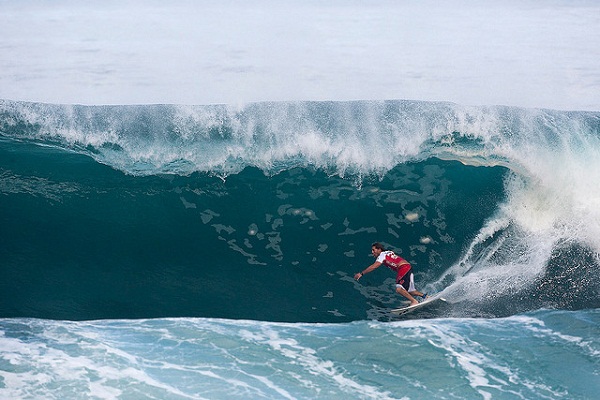 The man himself. Photo: surfglassy

Hundreds of surfers staged a memorial paddle-out in Puerto Rico today for Andy Irons, the three-time world champion who died of unknown causes earlier this week.

HUNDREDS OF PROFESSIONAL surfers and staff from the ASP Tour took part in the paddle-out, carrying wreathes and bunches of flowers and throwing them into the water off Middles Beach. Contest organizers had decided on Wednesday to postpone the next round of competition until Friday, out of respect for Irons.

Irons, 32, was found dead Tuesday in his hotel room in Dallas, where he had been on a layover. Irons was on his way back home to Hawaii after withdrawing from the ASP Tour with an illness whose symptoms reportedly resembled those of dengue fever.

Among the pros who participated in the paddle-out was Kelly Slater, nine-time world champion and friendly rival to Irons.

“It was a huge a group of people that got together — a couple hundred people paddled out,” Slater told the LA Times. “Obviously, everyone is very somber, and it’s just devastating news for everyone.”

The discovery of several prescription medications in Irons’ room has fueled speculation that he may have died of a drug overdose. Investigators from the Dallas Medical Examiner’s Office reportedly found methadone, used to treat heroin addiction and as a painkiller, on Irons’ nightstand, according to the Honolulu Star Advertiser. An initial autopsy was inconclusive.

Read the initial blip on this story on Radar.

What did you think of this article?
Meh
Good
Awesome
Bookmark
Posted In
Surfing
Destinations
Puerto Rico