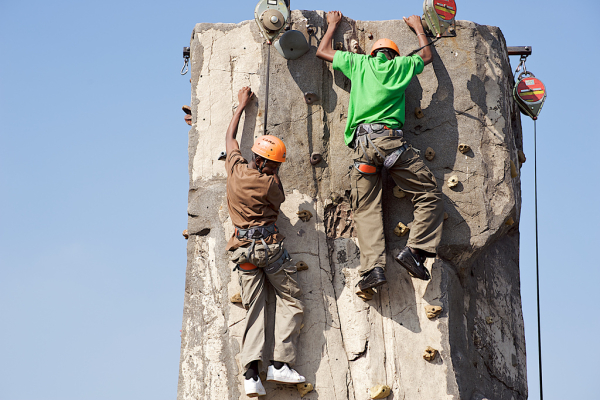 Britain and Ireland’s Rat Race Urban Adventure Series is like any other adventure race, except for one detail: it doesn’t happen in the wilderness.

THE RACE’S TWO-DAY London edition, the last of the UK season, begins on Saturday. Hundreds of teams will bike, climb, kayak, and freerun their way around the city, collecting checkpoints and completing various challenges along the way.

According to the series’ site, founder Jim Mee came up with the idea of an urban adventure race as a way to bring the sport to as many people as possible. The Rat Race is now in its sixth year.

The race is separated into three different levels. Saturday’s Mean Streets foot race is the easiest, while Sunday’s bike-based Nine2Five is more competitive and involves other challenges, such as climbing and parkour courses. The most popular division, Weekender, includes both races.

While the race’s organizers keep the course secret until the day of the event, past challenges have included everything from eating jellied eels to rappelling down the stands at Twickenham Stadium.

After the London race, the series kicks off its first-ever Australian tour with a race in Perth on November 7.

It’s too late to sign up for the Rat Race, but you may still be able to volunteer. Learn more at Urban Freeflow.

Tagged
Cycling Running London, United Kingdom
What did you think of this story?
Meh
Good
Awesome