I would gladly trade quality for solitude. When it comes to surfing, that means passing up perfect waves with a crowd to surf something empty. I don’t like to hassle for waves, and I certainly don’t like the aggravation that comes from sitting in the lineup for an hour without catching a single wave, all while watching the same guys on every set. For this reason I’ve avoided Hawaii for most of my adult life, choosing instead to venture out into more remote and lesser known coastlines.

Until last year, my surf trips consisted of finding the emptiest places on the planet. Then I ended up in Hawaii for a job, and my whole perspective changed.

The water is clear, unlike the murky cold stuff at home. 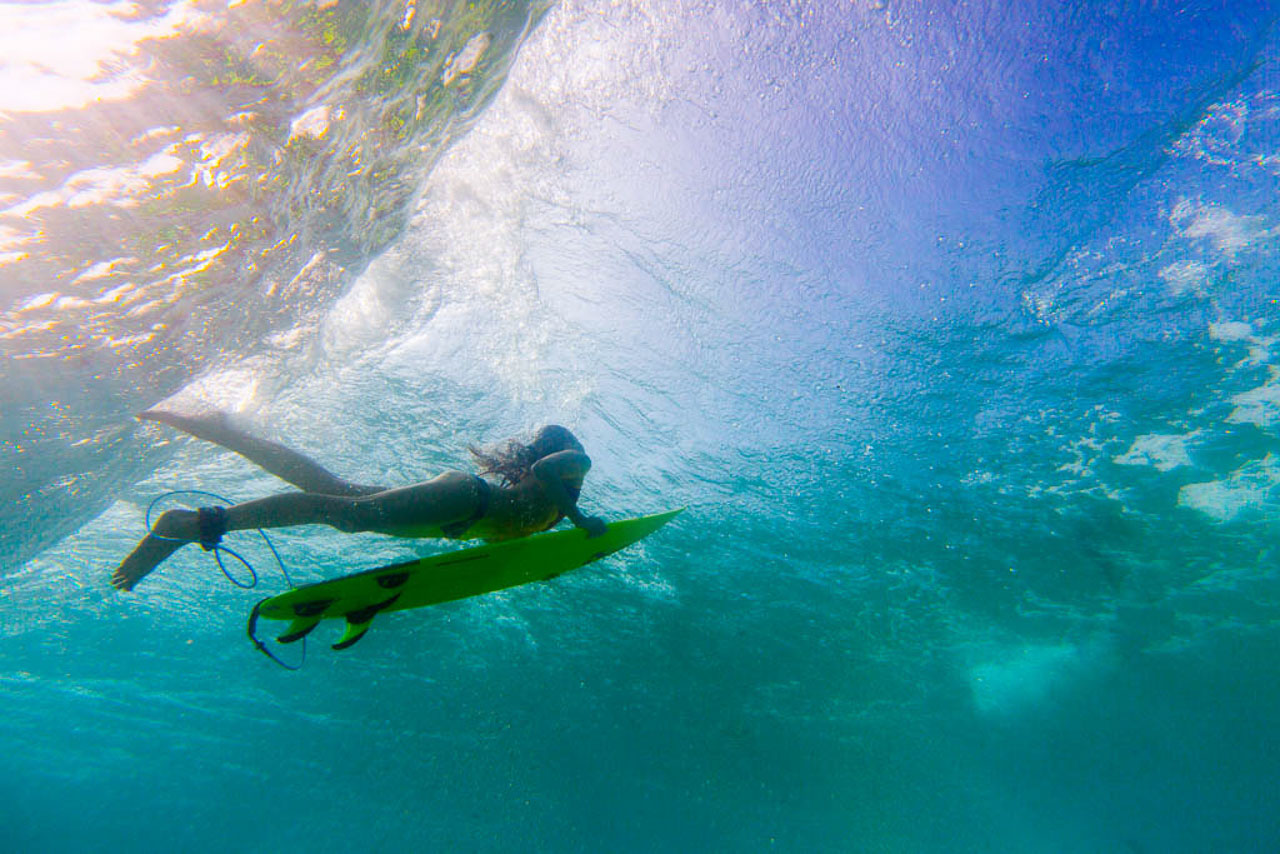 I live in California, and even on the clearest days visibility in the water is only marginal. The murky cold water separates you from the ocean in a way, creating a boundary to your senses. In the clear water in Hawaii, you no longer feel like your experience is limited to the surface. The world turns three-dimensional. You can look down from your board and see the ripples in the sand, and intricacies of the reef. That kind of awareness let’s you place yourself in the ideal spot to catch the next set. More personally, the clarity lightens my mood, and the warm blue water feels less intimidating.

I’ve learned to surf my own style there. 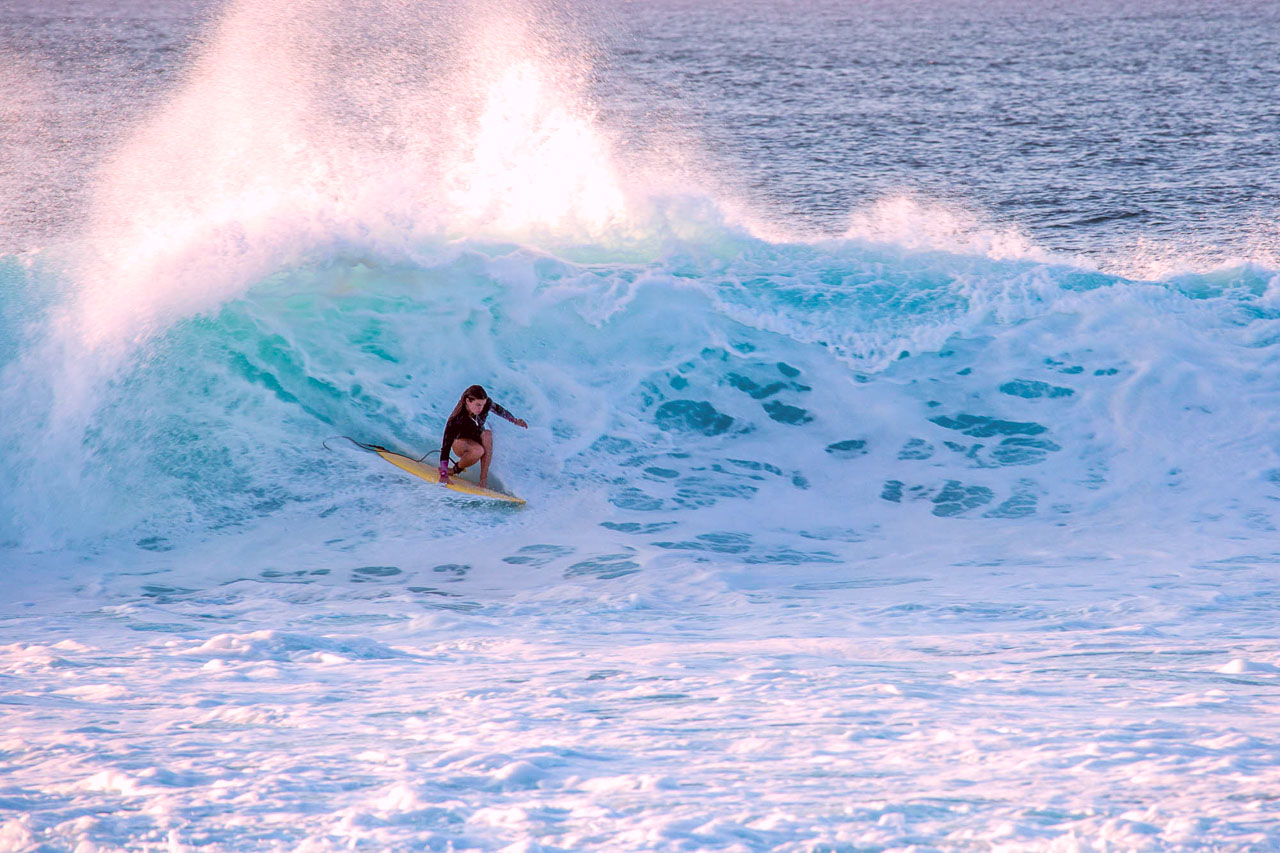 Too many people focus on surfing as if they are in a competition. This movement, or that act, is judged by a point system that quantifies your skill. Leah Dawson changed my whole perspective on what surfing is. I had tried to surf like other people, and failed. Coming from a background as a pro snowboarder, my surfing is hampered by habits engrained in me from years of riding snow. I’m not the guy that snaps the lip, and now I’m okay with that. I ride like I want to ride, looking for the deep carves I know how to do from snowboarding, and of course the occasional barrel. Watching Leah surf is watching someone do ballet on a wave. She couldn’t care less about how people expect her to surf, and because of that she has developed her own style. She doesn’t shy away from powerful waves, she dances with them.

I learn to expect the unexpected. 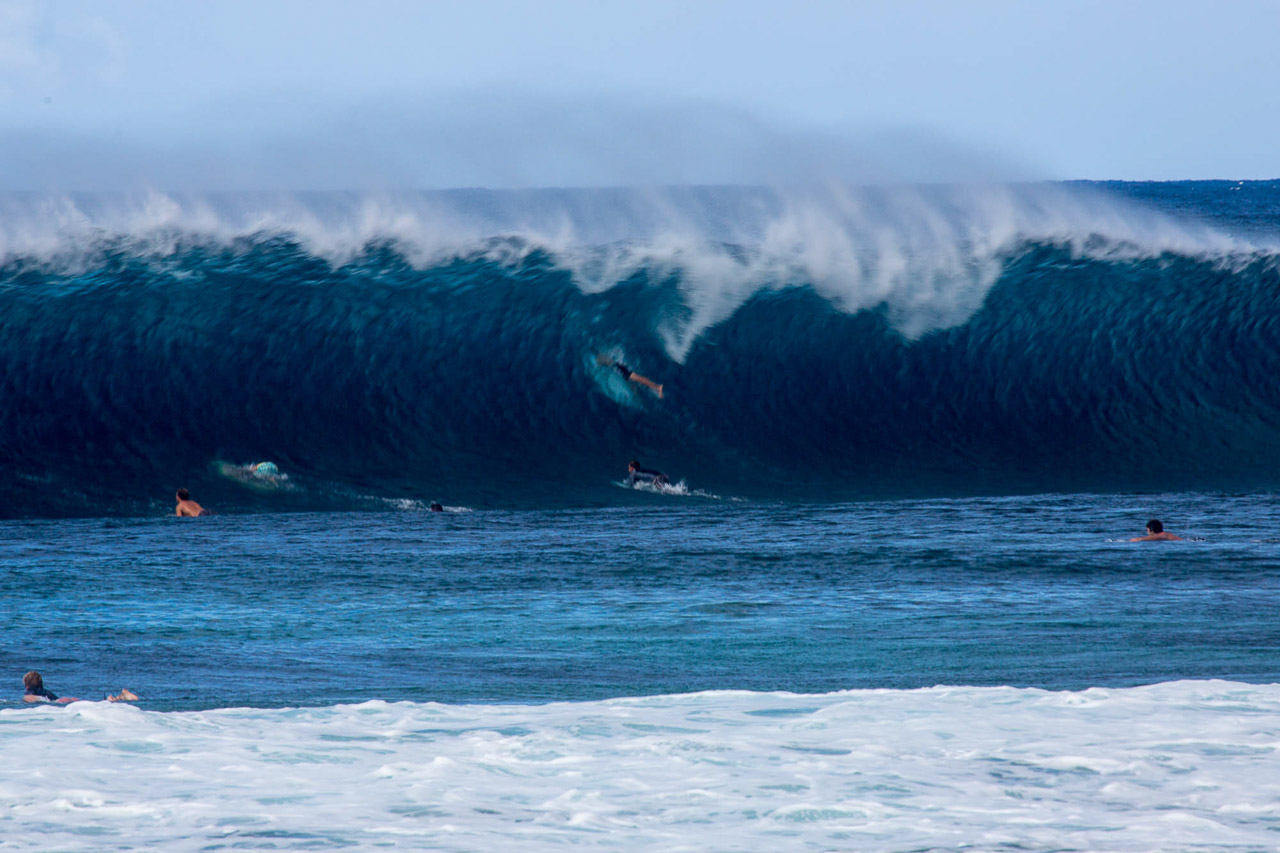 The power of the waves in Hawaii tests the abilities of even the worlds best surfer’s. The precision is what makes them manageable. The reef makes them break consistently, and predictably. Every once in a while though, you get caught off guard. Energy from thousands of miles away rolls in below sea level, and builds on the deep water reef. There are only a few moments of warning. As soon as one person starts scratching at the water, pulling towards the horizon, everybody turns and does the same whether they see what’s coming or not. When the waves get big in Hawaii, fewer people want to risk being in the wrong spot when that outside set detonates on the reef. The more the waves pick up, the better your chances are of getting them to yourself. If you have the skill level to ride the waves those who paddle out share a quiet respect for each other.

There are plenty of options. 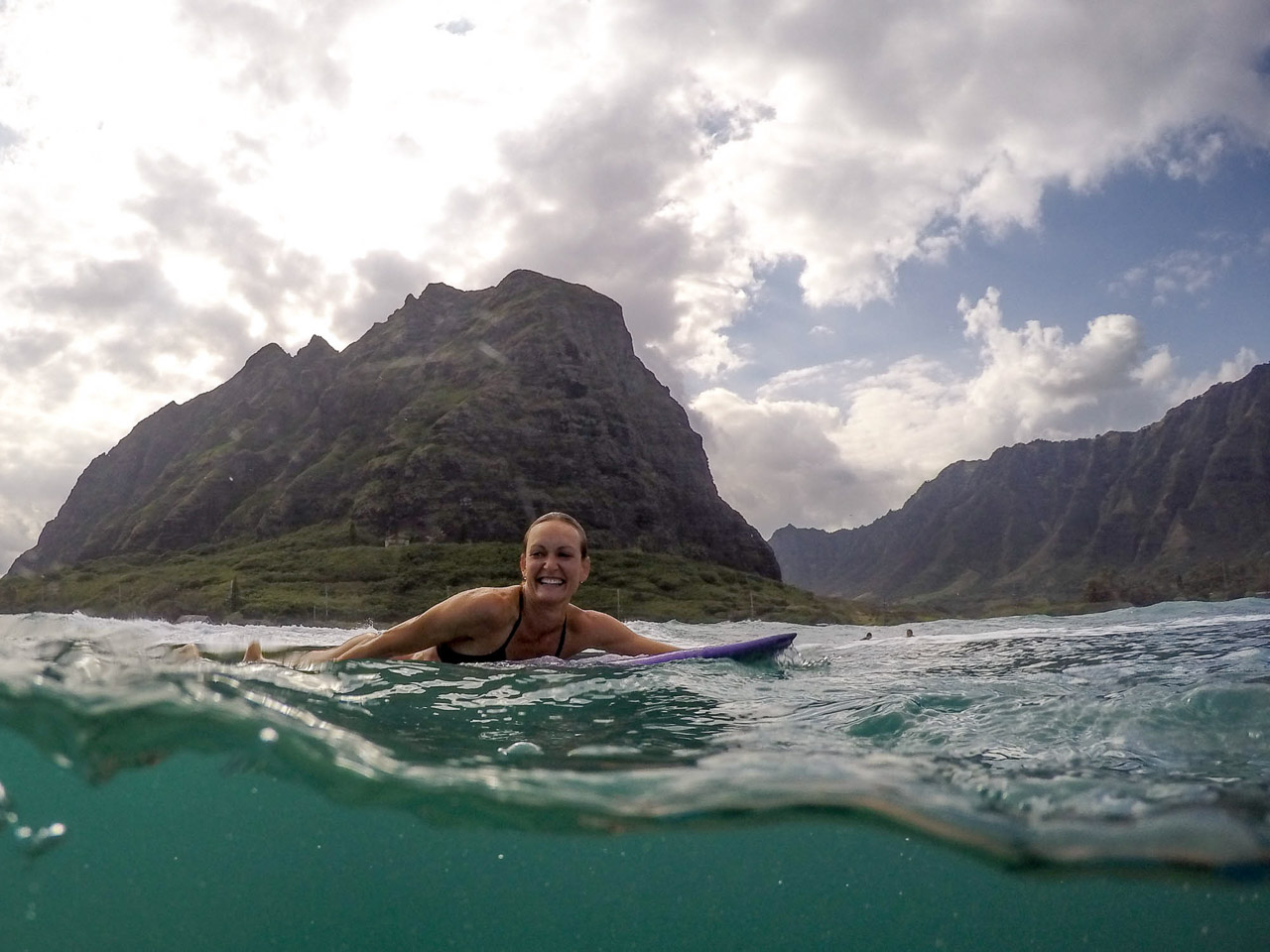 The North Shore of Oahu is known as the Seven Mile Miracle because there are more world-class waves packed into those seven miles than anywhere else on the planet. Add a few miles to that and you can find some really fun, casual surfing for any skill level, or better yet, you can find solitude. I was staying on Rocky Point, only a stones throw from some of the best waves in the world. The sun had just risen, and nobody was in the water. I grabbed my step-up board and started putting the fins in it. It was at this point that my friend Leah who’s a far better surfer than I will ever be said, “You know there’s a reason nobody is out.” I considered it for a few minutes, watching the empty waves. They were bigger than they looked, and they looked big. The current was ripping through the lineup and would be impossible to fight. I had some friends who were heading down the coast to a spot where the swell would lose some energy as it wrapped around the island, so I threw my boards on the car and headed east with them. The waves were only head high, but we were alone.

I get to explore “secret” waterfalls. 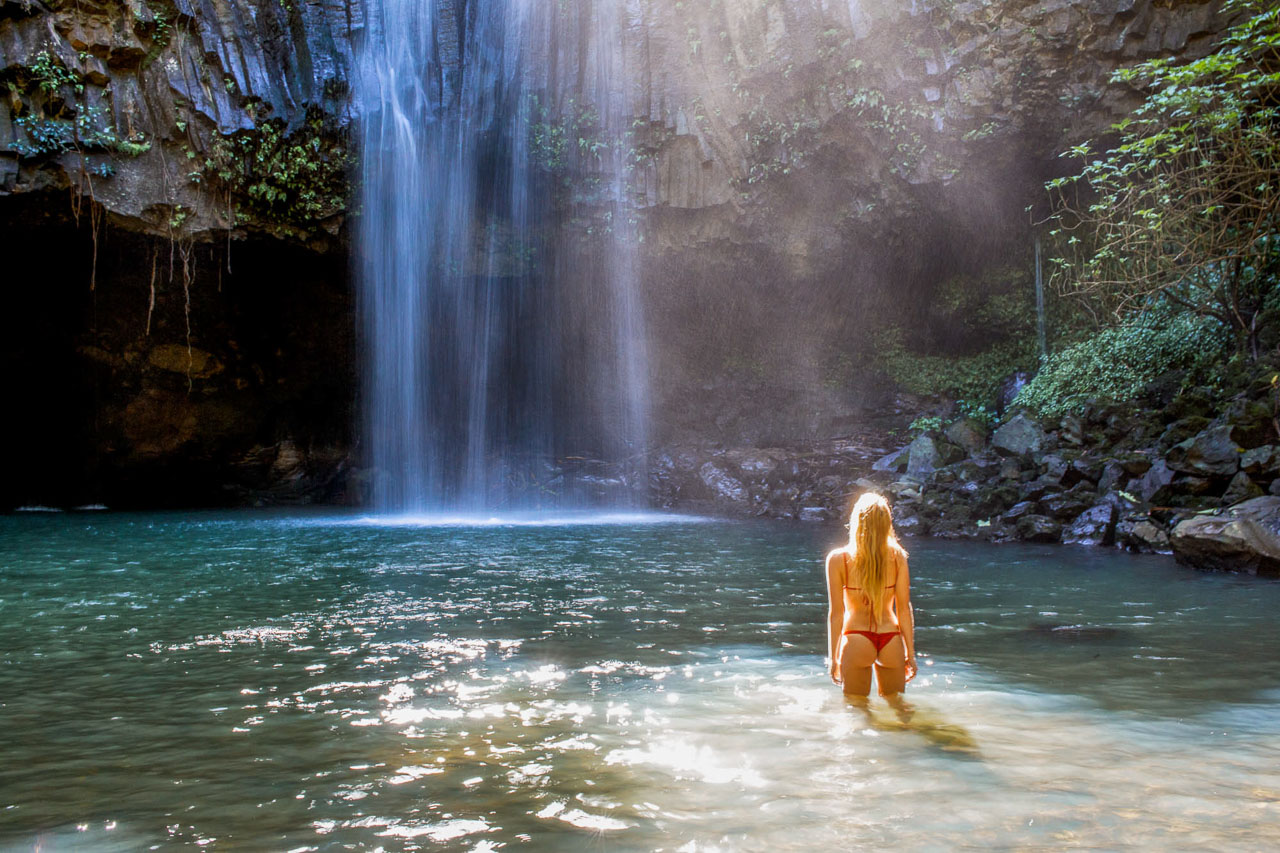 This chain of islands in the middle of the Pacific formed from volcanic eruptions, building layer upon layer of lava rock as the islands grew. The tropical rains erode away the weaker layers as they cascade between steep mountain ridges. The extraordinary geological activity has made Maui an island of waterfalls. There are the famous waterfalls along the road to Hana, and there are hidden falls scattered throughout the skirt of the volcano. My friend Lily is a Maui born local, but travels the world singing with Willy Nelson. I was lucky enough that she was on the island at the same time as I was, and she took me out for a day of exploring the lesser known falls. I love the warm ocean water, but there is something sensational about sitting in a pool of crisp fresh water and watching the water endlessly cascade from the cliffs above.

I get to snorkel with turtles. 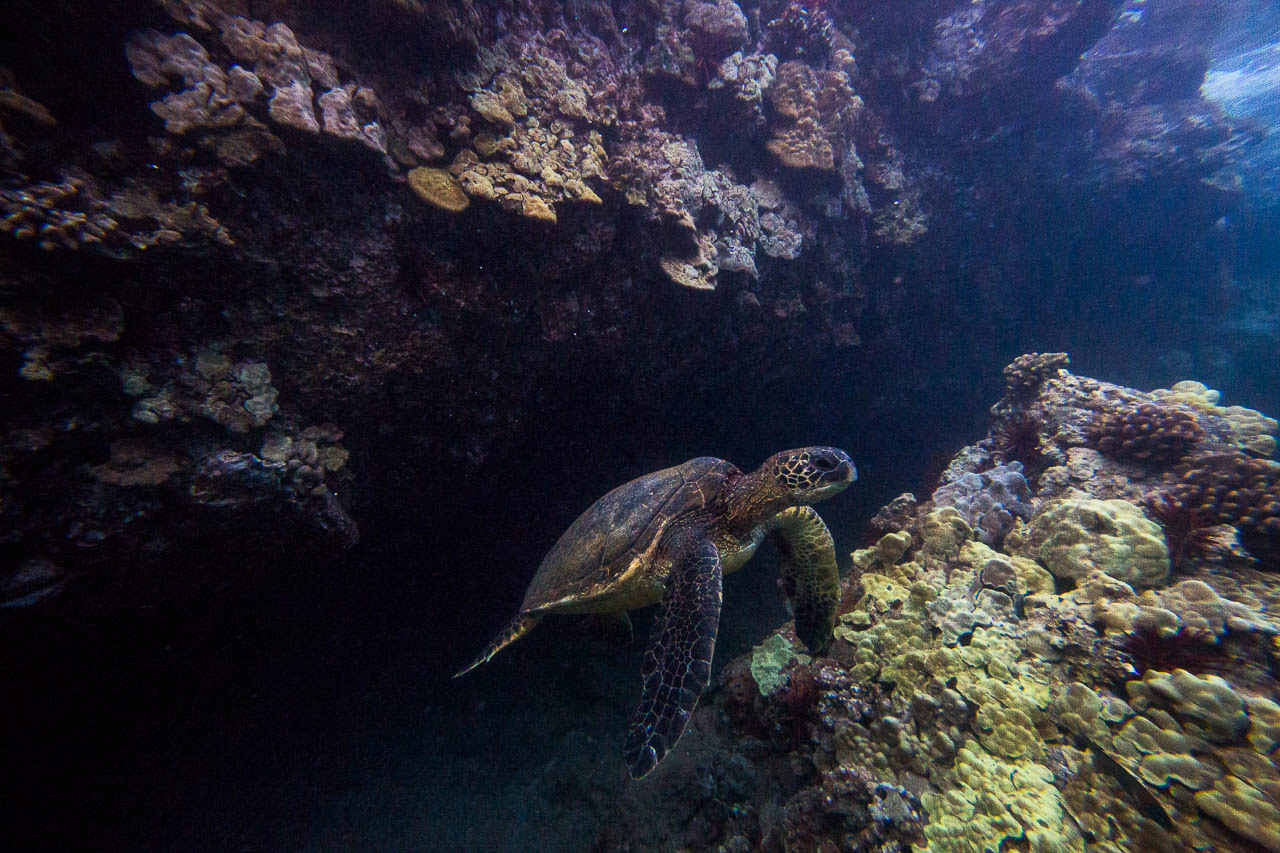 On the northern Coast of Maui an ancient lava flow poured down the mountainside and into the ocean. It formed the fissured base of stone that is ideal for the delicate coral reefs that would grow here. These coral reefs support vast amounts of life, and is crowded with turtles. A mask and snorkel is all you need to explore this other world and catch a glimpse of the turtles that rest in the underwater caves.

And swim with sharks. 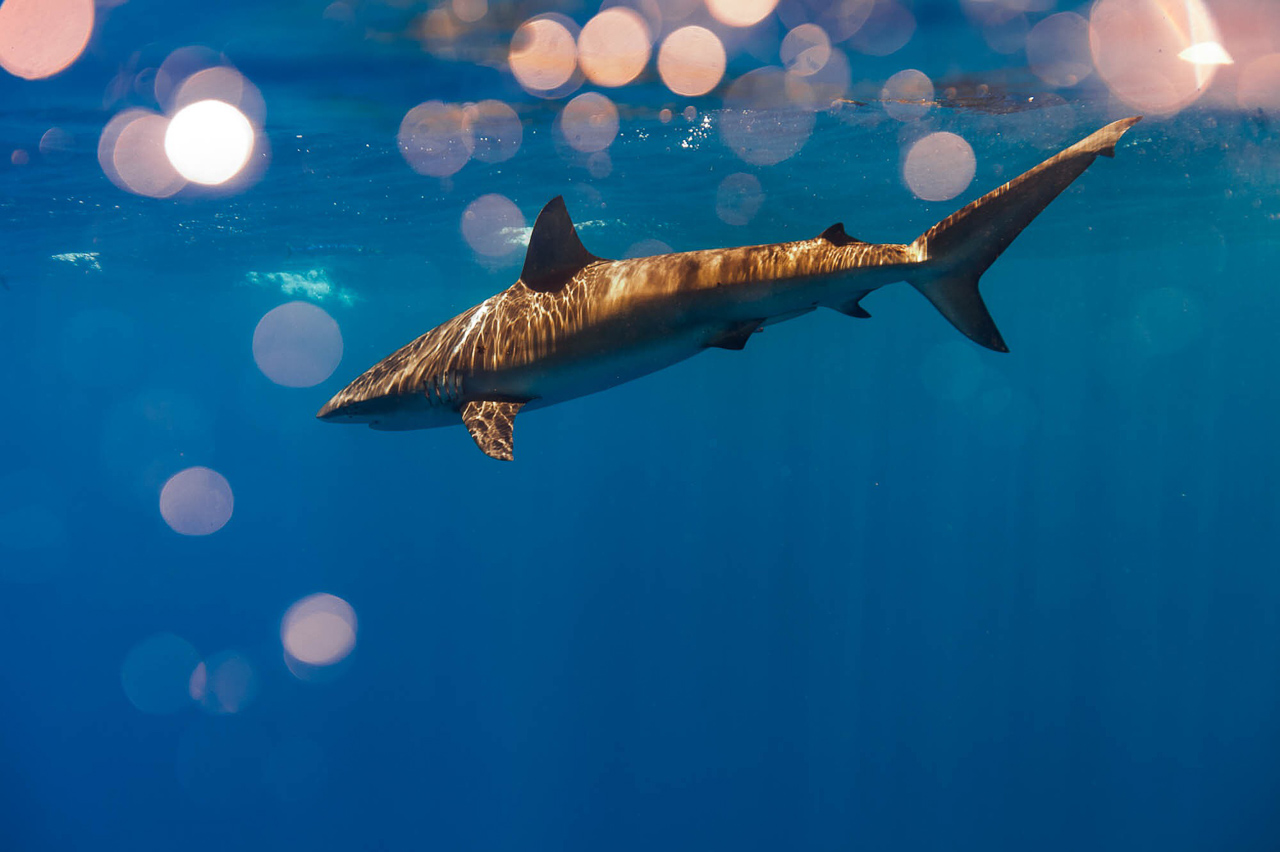 When asked, most surfers will say they try not to think about sharks while they are in the water. When they see them cruising by, most surfers make for the shore. I got my start with National Geographic by shooting a story on shark conservation, and it was during that story that my entire view of these animals changed. You see them cruising by, and in that moment you can read their body language just like you can read the body language of a dog. Even people who were attacked will change their perspective on these animals after voluntarily entering the water with them. Mike Coots lost a leg to a tiger shark, but after he was invited by One Ocean Diving to swim with the sharks off of the North Shore of Oahu, he became one of the most well-known advocates for the protection of sharks in the surfing community. Everyone with a fear of sharks should experience the calm sensation of swimming along with these animals. It will change you.

It’s not where you are, it’s who you’re with. 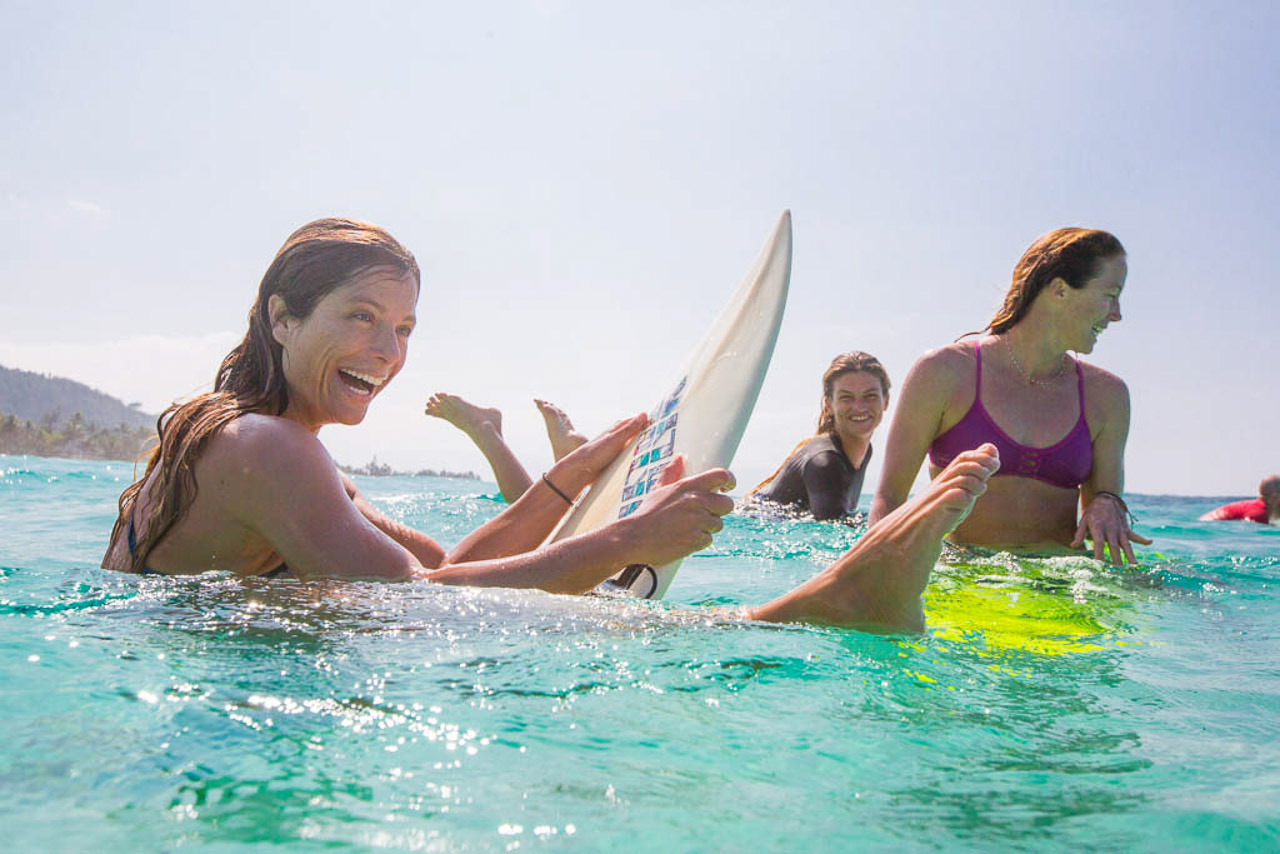 When my toes leave the sand and I slide into the water, a feeling of freedom and self-reliance comes over me. It’s why I do it; it’s the polar opposite of life on land. But for a sport where freedom is so natural, it has certainly developed a lot of rules. We need those rules to organize the lineup, to make sure that everybody gets a fair shot at riding the waves. Whoever is closer to the peak of the wave gets to ride it; never drop in on anyone; the locals have priority. In a crowded place like the North Shore, keeping track of all these rules and paying attention to who’s who can get complicated. A reputation for aggressive surfers keeps a lot of people from taking their chances in the lineup. That’s what I expected when I first visited the North Shore. I was timid to get in the water not because of the waves, but because of the people. I was there visiting the Henhouse girls though, and when they paddled out, the vibe in the lineup flipped. Their joy and excitement overrode any of the aggression that this place was known for. Suddenly, it went from a quiet place where no-one makes eye contact, to a gathering, where everyone in the water was simply stoked, sharing waves, and hollering compliments on well ridden waves.

When the waves are too big or too small, it can actually be a good thing. Down days excuse us from the shoreline to explore the other features of the islands. I had caught a flight to Maui where I was visiting an old friend, and the waves were not ideal. I decided to be a tourist and venture out to Haleakala National Park. The drive is slow and windy, but quickly takes you up 10,000 feet into the clouds. My mind was still on surfing mode as happens on surf trips, and watching these clouds building up and rolling over the volcanic cliffs conjured the feelings I have in the ocean, watching waves building on the horizon and eventually crashing to shore. It gave me a rush to stand there, under the breaking lip of a wave made from clouds and wind.

I get meditative in the ocean. 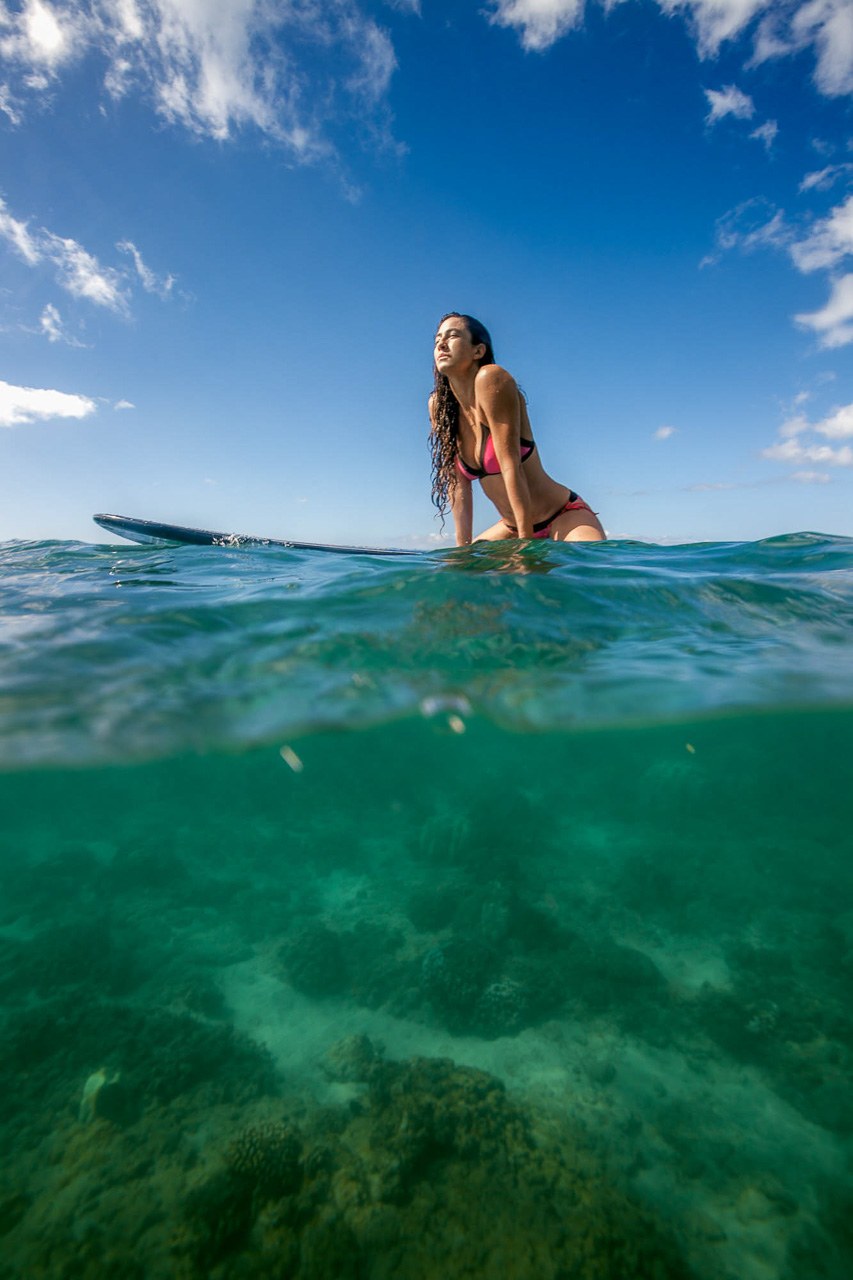 I grew up in Bermuda, and every day after school my dad would pick me up and take me out in the boat. Every day we were in the ocean even if it was only in a small way. Because of this when I can’t be in the water I feel like something is missing. I’ve never been much of a longboarder, and when the waves are small I tend to find something else to do. This day though, Kelly Potts and I had planned to visit the other side of the Island. She grabbed me an extra Surftech Longboard (she had a whole stack of them) and we went to look for some waves. Even though they were small, just being in the ocean was enough. There is science behind it, it’s not just me. The moment that water hits your face your heart rate drops 10 to 25 percent, it’s called the Mammalian Reflex, and it puts us in an almost meditative state.

It’s not just about the surf, but the environment you’re in. 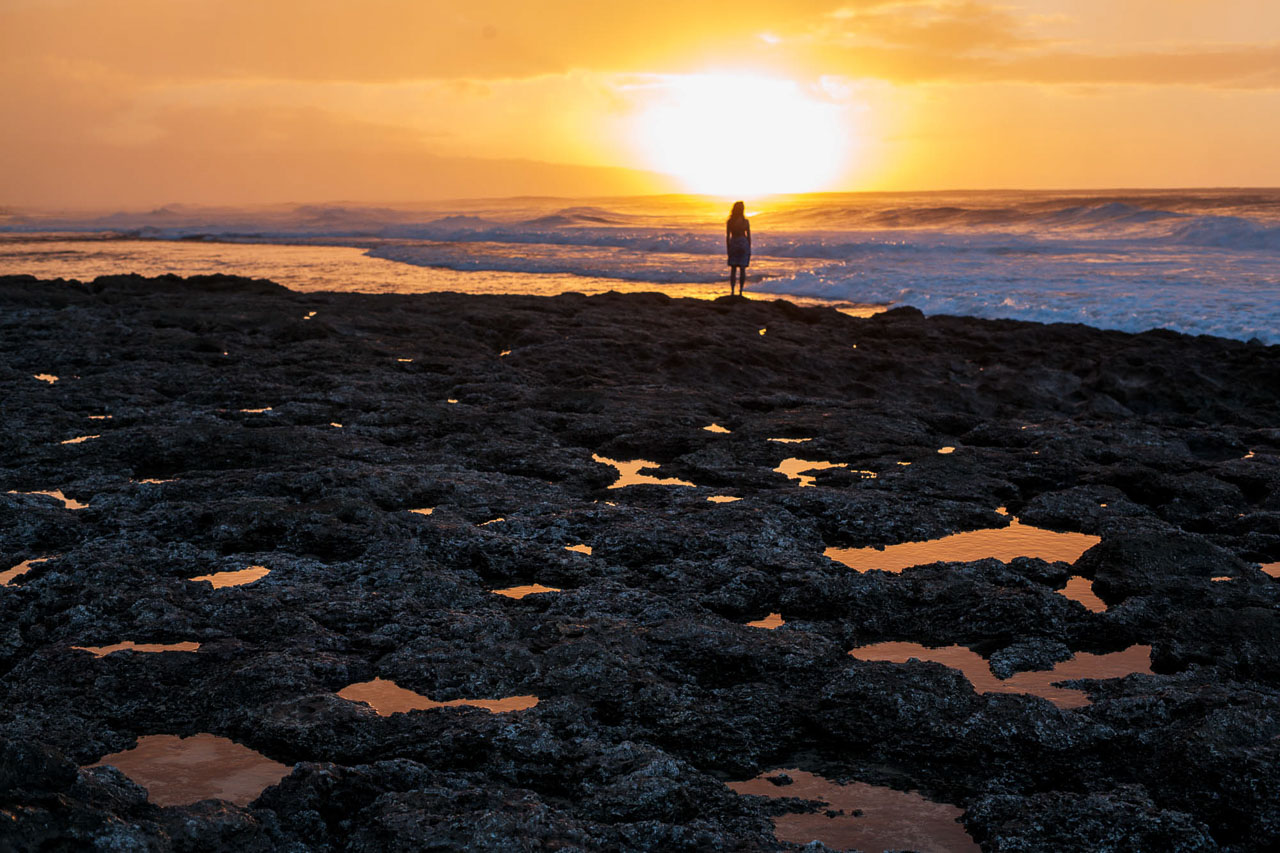 We focus so much on the waves on trips like this that we can forget that most of the day is spent on land. Being in a place that makes you happy when you’re not surfing is just as important as finding quality waves. Every day at sunset I would walk to the edge of the water at Rocky Point. There would be small gatherings of people sitting on the beach, some of them professional surfers, others tourists, me whatever I am. Here the view is for everyone, we are all equalized.

Tagged
Hawaii, United States
What did you think of this story?
Meh
Good
Awesome

Hawaiians Are Thrilled About Olympic Surfing, but They’re Not so Sure About the US Flag