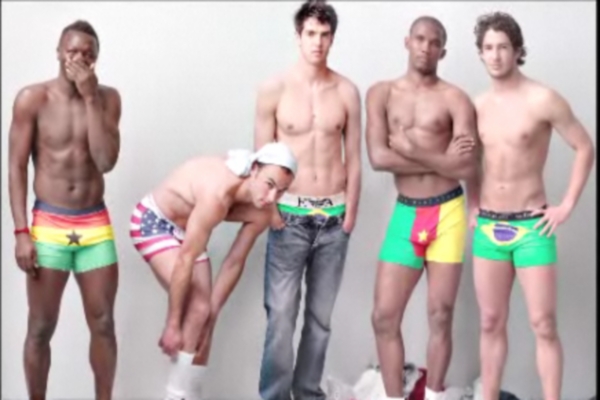 Some of the World Cup’s finest.

The award for Best Job Ever goes to Annie Leibovitz who traveled to Madrid, Milan, London, and Brooklyn to photograph muscled soccer stars in their skivvies.

JUNE’S ISSUE OF Vanity Fair features some of the biggest names in the upcoming 2010 World Cup, starting with right on the cover. Portugal’s Cristiano Ronaldo, Ivory Coast’s Didier Drogba, the US’s Landon Donovan, Brazil’s Kaka and Pato, and Germany’s Michael Ballack are among the boys to bare all (or most).

Their one choice of garment? Underwear featuring their country’s flag. The publicity stunt has captured the attention of fans around the globe, because to some people, these athletes “are more than just showstoppers. They are gods.”

Naturally, when stripping down a bunch of “gods,” many of whom are rivals of one another, drama is inevitable. Ronaldo is ticked off because he’s on the cover right next to his arch enemy, Drogba.

Ronaldo is also unhappy about how he’s portrayed, and is threatening to sue the magazine. However, he has been voted as the top World Cup pin up by a Dutch gay magazine for two years in a row, so objectification shouldn’t come as such a surprise to him. Perhaps he’s annoyed about sharing the spotlight with others?

Check out the video for some highlights of the shoot.

So what exactly does Vanity Fair hope to accomplish with the June issue? Perhaps they’re trying to appeal to a wider audience, or maybe they figured it was time to drool over scantily clad men on the cover of magazines rather than women.

Whatever the case, soccer just became a lot more appealing to me.

What do you think of the Vanity Fair photo shoot? Shameless self-promo, all-around fun, or a surefire way to get even more people interested in the World Cup?