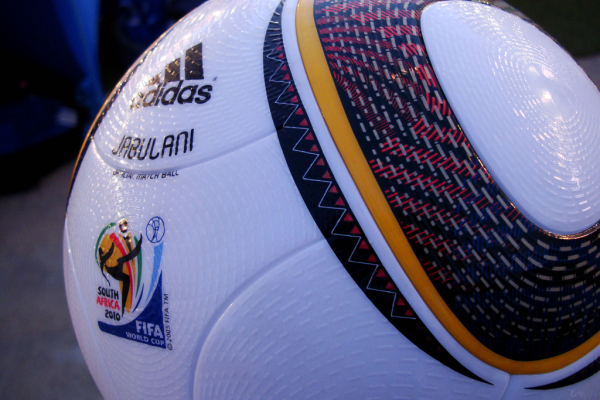 THE 2010 WORLD CUP has been one of remarkable errors. Anyone who saw the English and Algerian goalkeepers fumble crucial saves, or the referees fumble equally crucial calls, has probably noticed the trend.

It turns out that the players may have an excuse: it’s the ball’s fault.

A group of researchers from the California Institute of Technology in June tested the performance of Adidas’ new Jabulani ball in a wind tunnel. They found that the ball tended to behave unpredictably at high speeds, making it hard to control.

The Jabulani, which is being used exclusively in this World Cup, is made of eight panels of synthetic material, thermally fused together. Adidas says the new ball is the most pefectly round and accurate design ever produced.

According to Beverly McKeon, who led the team at Cal Tech, the Jabulani’s smooth surface could be to blame for its erratic behavior.

She used the example of modern golf balls, which have dimpled surfaces to let them fly straighter and further than perfectly smooth balls could. In contrast, the Jabulani switches between turbulent and smooth airflow when kicked, making it appear to change direction in the air.

“So as the goalkeeper sees the ball coming, it suddenly seems to change its trajectory,” McKeon said. “It’s like putting the brakes on, but putting them on unevenly.”

A similar study at NASA’s Ames Research Center found that this “knuckle-ball effect” occurred at speeds of 45 to 50 mph. That’s about how fast the ball goes during a penalty kick, such as the one Ghana’s Asamoah Gyan missed in his country’s loss to Uruguay last Friday.

Players and coaches have been complaining about the new ball since the World Cup began last month. England coach Fabio Capello called the Jabulani “the worst ball that I have ever seen in my life,” and said it was “impossible to control.”

“For the players it is terrible. It’s terrible for the keepers because it is impossible to deal with the trajectory,” he said last month. “It’s good when you play short passes but when you try to switch the ball with long passes it is really difficult to understand the trajectory.”

Germany, which will play Uruguay in the third-place match on Saturday, may have an advantage because of the new ball. Five clubs in the bundesliga, Germany’s premier league, played with the Jabulani last season.

But former Germany goalkeeper Timo Hildebrand told the Daily Mail that the ball would always be tricky to handle.

“You cannot predict which direction it might go,” he said. “You can only hope and pray you get a hand in the way.”

Should FIFA go back to a more classic ball design? Tell us what you think in the comments.

What did you think of this article?
Meh
Good
Awesome
Bookmark
Posted In
Travel
Destinations
California, United States South Africa