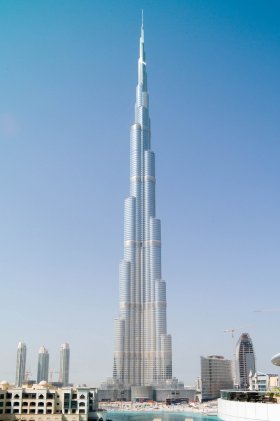 TODAY, closing out 5 years of construction and anticipation, Dubai celebrated the official opening of the Burj Khalifa, the world’s new tallest building.

That simple title doesn’t do it justice though. The Burj is nearly 1,000 feet taller than the previous record-holder, the Taipei 101. And, as Time Magazine reports:

The building boasts the most stories and highest occupied floor of any building in the world, and ranks as the world’s tallest structure, beating out a television mast in North Dakota. Its observation deck — on floor 124 — also sets a record.

There are lots of great images out there of this mammoth spike jutting up from the flat desert plains.

Actually, dozens of other brand-new “skyscrapers” surround the building, but compared to the Burj they might as well be sand dunes.

The Guardian has a good photo essay of the construction from start to finish. But nothing outdoes this YouTube video, shot from the very pinnacle of the tower:

Shadow of the Burj

Of course, as with most things in Dubai, there’s more to the story than the headline. This time the subtext starts with the name of the building itself.

Up until a few days ago, the world’s tallest structure was going to be called the Burj Dubai. The switch to Burj Khalifa was a gesture of gratitude to Sheik Khalifa bin Zayed Al Nahyan, the ruler of the neighboring emirate of Abu Dhabi.

Less than a month ago, Abu Dhabi effectively bailed out Dubai, loaning it $10 billion to pay off its debts and work towards economic stabilization. Dubai has nowhere near the oil wealth of Abu Dhabi and has been hit hard by the global financial collapse — particularly in the real-estate sector. 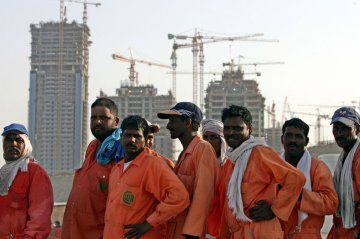 Photo above and feature: Avatar/ΣΙΓΜΑ

For example, apartments in the Burj were selling for $1,900/sq.ft. back in 2008, but these days that figure is down by more than half.

The folks over at the UAE Community Blog have created a graph of the “Dubai Fortune Index,” noting similarities in the shape of Dubai’s new skyline and the spikes of the emirate’s economy.

Also, as I’ve touched on before in Dubai: A Damning Portrait, the treatment of foreign construction workers in Dubai, many of whom were brought over specifically for the Burj project, is a major stain on the regime’s reputation.

Dubai and Abu Dhabi get plenty of press, but there are 5 more emirates in the UAE. I hadn’t heard of any of them, so I found The Guardian‘s recent article “The Unknown Emirates” pretty interesting. Some background:

A British protectorate for almost 100 years, the UAE came into existence in 1971 when an agreement between local leaders and the British government ended. The capital and by far the richest is Abu Dhabi, with vast amounts of oil beneath its deserts; its sheikh is the overall ruler. 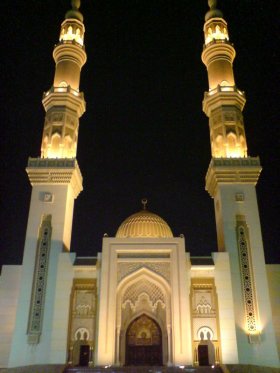 Fujairah: The first emirate to gain independence, Fujairah’s coast on the Gulf of Oman is where to find the best beaches, snorkeling, and diving in the region.

Sharjah: The focus here is on family-friendly tourism (the emirate is 100% dry), with the Gulf’s largest art museum and other cultural and historical attractions.

Ras al Khaimah: This one’s up-and-coming — “guaranteed sun without the bling” — so might be the place to score a reasonably priced stay at a luxury villa.

Ajman and Umm al Qwain: The last two are tiny and, apart from the odd white-sand beach, The Guardian doesn’t think there’s much to recommend them.

If you enjoyed the video embed, check out 10 Places to Catch Insane City Views, then bounce over to MatadorTV for the best travel video on the Web.

Tagged
Dubai, United Arab Emirates
What did you think of this story?
Meh
Good
Awesome

The 10 least-visited national parks in the US, and why you should go
Everything you need to know about visiting the Dominican Republic this summer
9 tart and sweet traditional lemon desserts from around the world
This map shows how weak US passports are right now
The best island in the Caribbean for every type of traveler

This cappuccino made with real gold is classic Dubai

Could the Burj Khalifah Collapse?

12 looks at the modern skyline of Dubai

Vibrators, abayas, and the shway shway sisterhood of Dubai

17 signs you were born and raised in Dubai

I’m an American expat living in Dubai, here’s what it’s like to watch the US election

British woman detained indefinitely in Dubai for drinking on her flight