A FEW MILLION YEARS AGO, the coast redwood (Sequoia sempervirens) covered large swathes of North America, Europe, and Asia. By the 1850s, before the advent of modern commercial logging, this range had been reduced by natural causes to the Northern California coast, though still these forests were robust and dominated the landscape. Since then, it’s estimated that 95% of old-growth redwoods have been cut — only groves situated in steep gullies and other hard-to-access terrain, and those hurriedly protected as people realized how endangered the species had become, remain.

Yet even though their numbers may be a mere fraction of what they once were, when you’re walking through one of the old, mighty groves in Redwood National Park, or Jedediah Smith, Prairie Creek, Del Norte, or Humboldt State Park, their impact is unmistakable. You’re transported to a different world, a different time, one that exists nowhere else on Earth.

Many people are introduced to the coast redwood here, in Muir Woods National Monument. Located just over the Golden Gate Bridge from San Francisco, it's one of the most easily accessible redwood forests.
Photo: Benson Kua 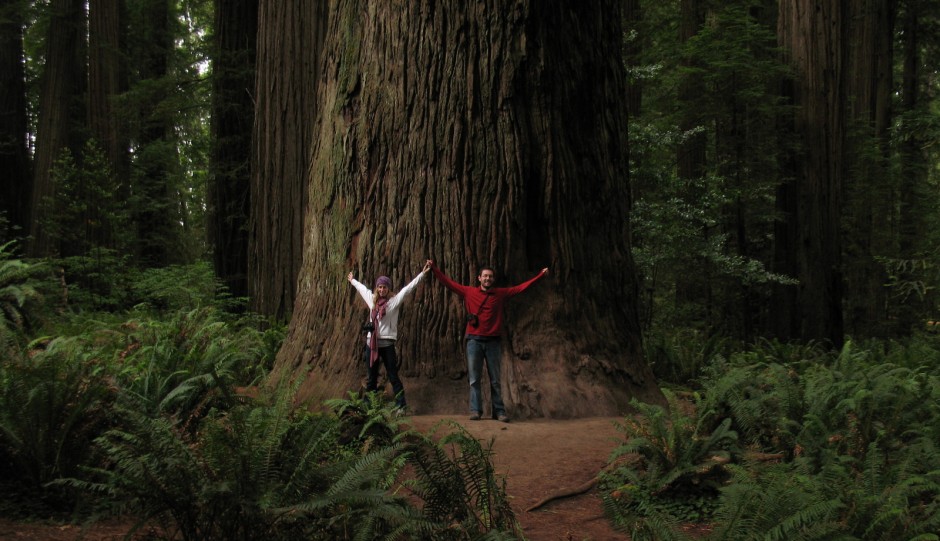 To see the truly massive specimens, however, you need to travel north. Coast redwoods don’t get quite as wide as their cousins the giant sequoia, but 26ft diameters can hardly be considered second rate. This tree stands in Stout Grove, Jedediah Smith Redwoods State Park.
Photo: Author

Where redwoods leave the sequoias behind is height. These are the tallest trees on the planet, with the highest so far measured at 379.1 feet. That's over 70 feet taller than the Statue of Liberty, taking into account pedestal and foundation.
Photo: lunaport

And, stats aside, they're just awesome to look at.
Photo: mason bryant

The canopy of a redwood grove, out of sight of both earth and sky, has been described as an “unexplored ecosystem.”
Photo: Rick Rowland

"Cathedral trees" sprout from a shared base, like these in Prairie Creek Redwoods State Park.
Photo: rachel_thecat

Jedediah Smith is probably my personal favorite of all the redwood parks in California, located just inland of Crescent City, a dozen or so miles south of the Oregon border.
Photo: Paul Hamilton 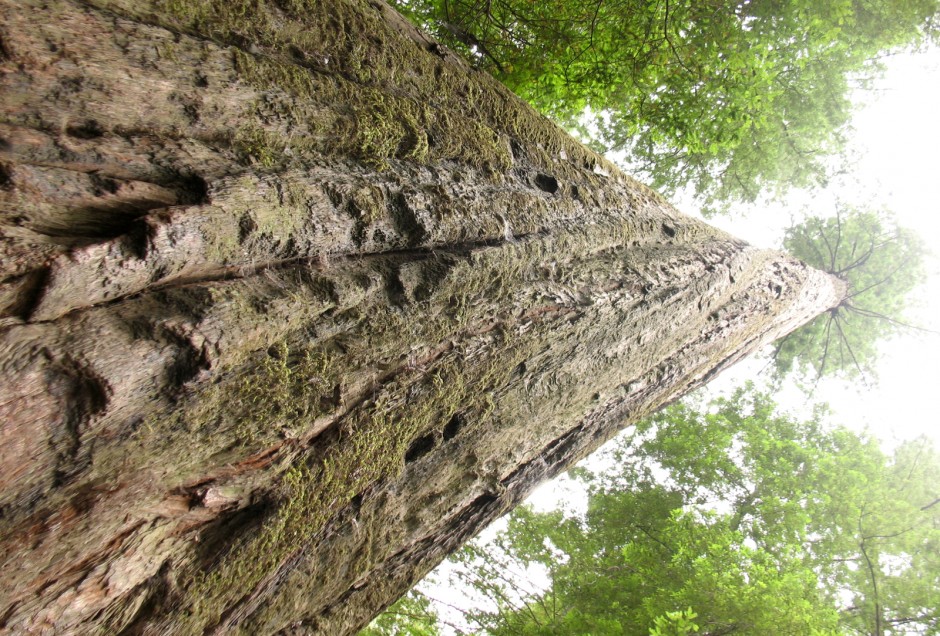 Many of the tallest trees on Earth are clearly marked and easily accessible on public lands, like this one in Humboldt Redwoods State Park.
Photo: Author

But the locations of the most serious trees and groves are kept secret, to protect both the redwoods and inexperienced hikers who might otherwise seek them out. This is one such tree, Screaming Titans, in the Grove of Titans, Jedediah Smith Redwood SP.
Photo: H Dragon

Stitched photo of a redwood

A stitch job showing the full height of a tree in the Grove of Titans.
Photo: H Dragon

Redwoods are so tall that it's nearly impossible to tell the monstrously high from the merely gargantuan when you're standing beneath them.
Photo: Paul Hamilton

Like any other ecosystem, a redwood forest is constantly in flux. When one of the old sentinels falls, it returns tons of biomatter to the soil and can take decades, if not centuries, to fully decompose.
Photo: Maureen Didde

The coast between San Francisco and Monterey is dotted with smaller groves protected in parks such as Portola.
Photo: Dawn Endico

A grove in the Santa Cruz Mountains

Another tree in one of those southerly groves.
Photo: Shayan (USA)

You could easily mistake this coast redwood for a sequoia, its trunk is so stout.
Photo: joannapoe

We are just dwarfed by these trees. This one is in Jedediah Smith Redwoods SP.
Photo: NAParish 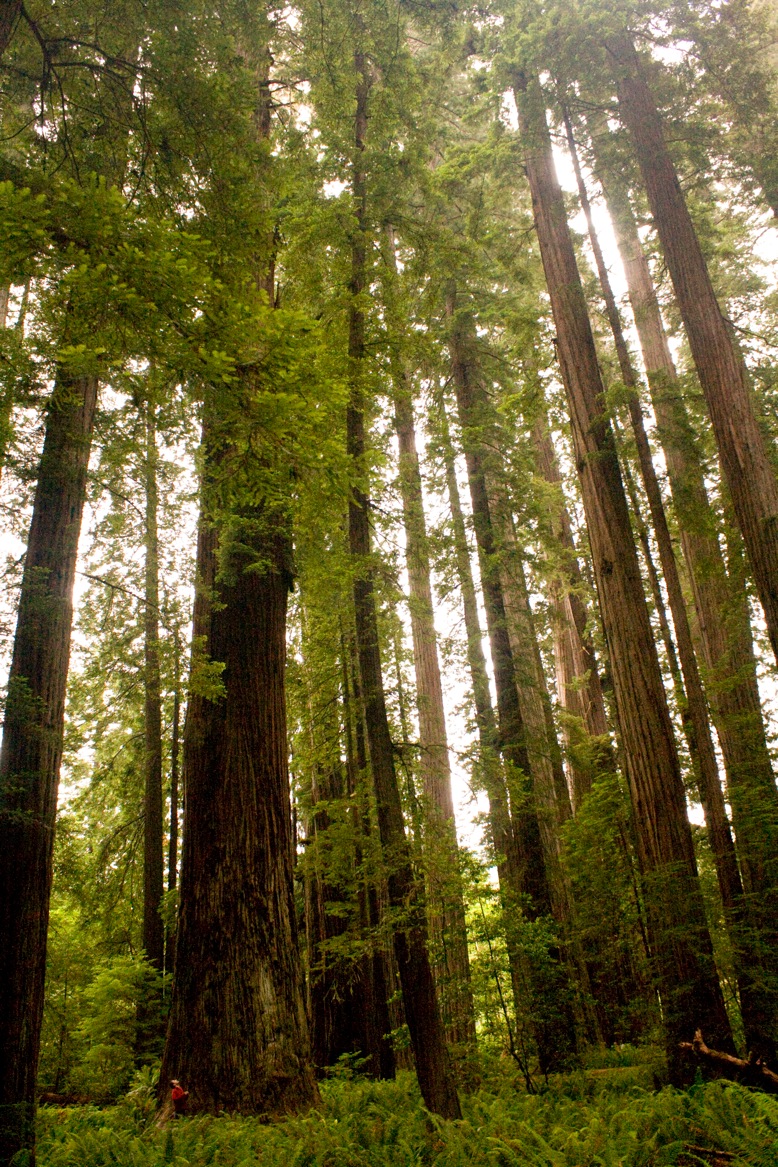 A vertical look at Stout Grove. I'm the red dot at the bottom left.
Photo: Author

We treat our redwoods better today than they did in the 1930s. Still, if you ever wanted to drive through a tree, here ya go.
Photos: lostintheredwoods (left), nagobe (right)

Equally impressive in fog as in sunlight, California's redwood forests are something you need to experience in person.
Photo: Author

There's no doubt that trees bigger than today's record holders were logged over the last century and a half. It's not clear whether this was a coast redwood or giant sequoia, only that it was ginormous (note the team of horses on top). Perhaps in another millennium or two, the coast redwood will once more dominate the forests of Northern California.
Photo: David C. Foster

Editor's note: This post was originally published on November 19, 2009.