IT’S LIKELY YOU’VE SEEN PHOTOS of the bright, colorful hoodoos of Bryce Canyon National Park — those ancient rock spires shooting up hundreds of feet toward the sky — but there’s no substitute for walking among them. The experience is visceral and humbling, and to consider the geological forces responsible for creating this unique place is an exercise of immense imagination. The park’s series of vast natural amphitheaters (they’re technically not “canyons,” despite the name) have been etched by erosion for millions of years.

Beyond the reds and oranges of the “forest of stone,” though, is the amazing amount of life the area supports, including over 400 native plant species, 170 species of birds, and mammals like deer, foxes, mountain lions, and black bears. The park also has some of the darkest skies in North America — on an average clear night, you can see 7,500 stars with the naked eye. In Bryce Canyon, the spectacular views last a full 24 hours.

Bottom line: Don’t pass up the opportunity to visit one of Utah’s best parks — one of Earth’s most impressive landscapes.

Bryce Canyon is located in the heart of Southern Utah and can be accessed easily from multiple directions: Salt Lake City to the north, Zion National Park in the southwest, and Escalante to the east. Wherever you’re coming from, you enter the park via State Route 12, an All-American Road that’s one of the most scenic drives in the country.

Whether before or after your trip to Bryce Canyon, I highly recommend taking SR 12 east of the park, into/out of Escalante and Boulder. There’s a stretch between these two towns called the Hogsback — a narrow strip of road that falls off dramatically on both sides into a valley far below. Driving along this ridge is surreal and a road trip experience that shouldn’t be overlooked.

Bryce Canyon is open to visitors 24/7, every day of the year. Its Visitor Center — where you can obtain park information and backcountry permits, view exhibits and a film, browse / purchase books and maps, and clean yourself up if you’re road tripping and camping — is open daily except for Thanksgiving, Christmas, and New Year’s Day. Opening times vary throughout the year depending on the season. Also note that if you’re traveling in the winter months, some roads may temporarily close due to heavy snowfall. But don’t let that deter you — during this extraordinary season in Bryce Canyon, you’ll be rewarded with astonishing winter beauty and solitude. 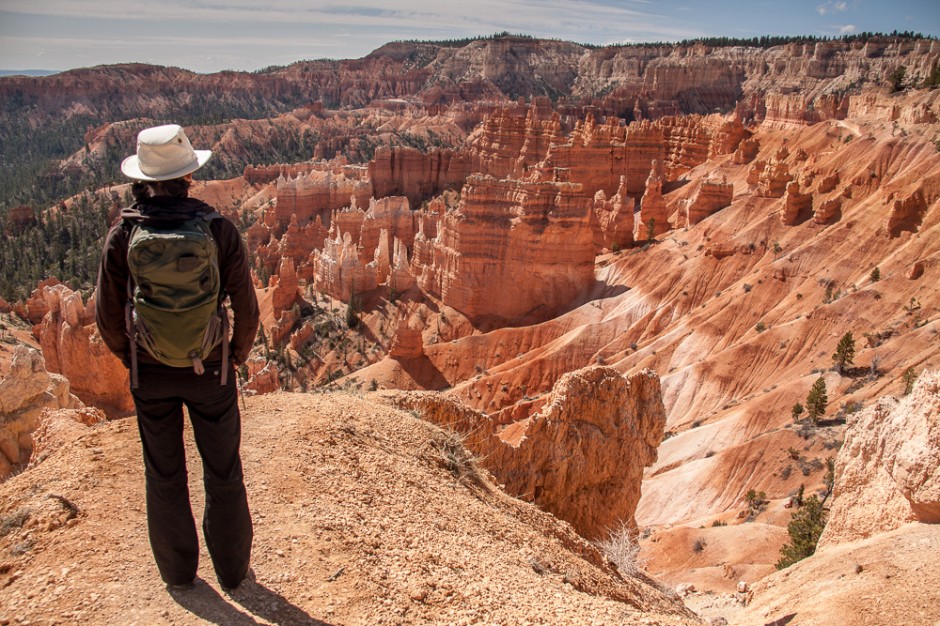 There’s a surprising range of temperatures in the region, thanks to its elevation (climbing from 6,600 to 9,100 feet). Average temps in winter get as low as 9 degrees, and in summer as high as the mid-80s. Make sure to bring appropriate layers based on the time of year you’re traveling. Bryce also receives more precipitation than many parts of Southern Utah, averaging 15-18 inches per year.

Bryce Canyon is relatively small compared to other Utah national parks like Zion, Arches, and Canyonlands. The 18-mile scenic road that runs north-south through the park traces the rims of the amphitheaters for the most part and has turnoffs for viewpoints, hiking trailheads, and picnic areas. There’s a 1,200ft elevation gain between the entrance and Rainbow Point at the end of the paved road. Pay attention to the changing flora — from ponderosa pine to spruce, fir, and aspen — as you ascend.

Small or not, the park can afford you days of on-foot exploration, and the varying levels of trail difficulty and length mean there’s something for everyone. Below are some recommended options; click here for a full list. Note that many of the trails are interconnected, so multiple route combinations exist depending how long and far you want to walk. Also, keep in mind that these hikes take you from the rim down into the amphitheaters — it’s always uphill on the way back!

Queens Garden (easy): Dropping 320 feet into the main amphitheater, this is considered the easiest route down. It starts at Sunrise Point and has you walking among the hoodoos, eventually ending on a spur trail about a mile along the path that overlooks Queens Garden (which gets its name from a distinctive hoodoo called Queen Victoria, one of several whimsically named formations in the park). If you continue on the trail towards Sunset Point, you’ll have a fairly strenuous hike up several switchbacks. The entire length of this trail is around 2.3 miles (the walk between Sunrise and Sunset points along the rim at the top is half a mile), meaning if you park at either point and do it as a loop, it’s a ~3-mile hike.

Bristlecone Loop (easy): From Rainbow Point at the road’s terminus, this trail has you hiking through forest at the park’s highest elevation (9,100 feet), past bristlecone pines as old as 1,800 years. This area is also inhabited by plentiful wildlife including woodpeckers, owls, and Steller’s jays. The short trail (1 mile round trip) is sometimes closed in mid-winter.

The view along the Queens Garden Trail. Photo: Srikanth Jandhyala

Navajo Trail (moderate): This is another route down into the amphitheater, beginning at Sunset Point and taking you through a slot canyon past towering Douglas firs. Large rockslides have occurred in the past; when I was there in April, 2014, the trail was closed, unfortunately. You can combine it with Queens Garden for a longer trek.

Hat Shop (moderate): Starting at Bryce Point, this route covers 2 miles of the much longer Under-the-Rim Trail, and is a good option for getting a different perspective on the majesty of Bryce Amphitheater (you’ll be seeing it from the south as opposed to the west). It leads to a cluster of hoodoos, on top of which are perched precariously balanced rocks — hence the name!

Fairyland Loop (strenuous): This trail begins at Fairyland Point and is 8 miles round trip. Most people take 4-5 hours for the entire hike, which has several elevation changes. A highlight is Tower Bridge, a unique rock formation consisting of two tall towers connected by a natural bridge, accessed by a spur trail off the main loop — don’t miss it!

Riggs Spring Loop (strenuous / backcountry): This 8.5-mile loop (steep at times) at the far southern end of the park can be hiked in a day, but there are four campsite options along its path. If you plan on camping, don’t forget to register at the Visitor Center for a backcountry permit ($5 for up to 2 people, valid for 7 nights). Spending the night in the Bryce Canyon backcountry, under a full blanket of stars, is an experience you won’t soon forget. Highly recommended.

Under-the-Rim Trail (backcountry): The Under-the-Rim trail is 22.9 miles long and connects Bryce Point and Rainbow Point, overlapping with many of the routes listed above in the process. There are eight campsites along the way and shuttles are available (check here for a schedule). Make sure to obtain a backcountry permit if you’re going to attempt this Bryce Canyon mega-trek.

There’s a variety of ranger-led activities, from short talks about the history and geology of the area, to children’s programs, to rim walks, to full moon hikes. Some require reservations. Two annual festivals also pay tribute to Bryce Canyon’s most notable features: its geology, and its dark skies. Look for the Astronomy Festival in early summer, and the Geology Festival not long after. Learn about this incredible place from the experts!

Some park trails are designated as horse-only (when my partner and I were there, we took a wrong turn and ended up on one; if you do, just watch where you’re stepping!), such as the one that leads from the corral down into the amphitheater by Queens Garden. Book a tour with Canyon Trail Rides for an in-the-saddle perspective on Bryce Canyon.

The fun doesn’t stop in winter. With a fresh coating of fine Utah powder, the landscape takes on a whole new aura, and it’s time to break out the snowshoes and skis. There are some ranger-led snowshoe hikes in which gear is provided; you can also bring your own or rent in nearby Bryce Canyon City (on Highway 63 just north of the park entrance). An awesome time to see Bryce Canyon in its winter glory is the annual Winter Festival, held over Presidents Day weekend.

For those not hitting the backcountry, there are two drive-in campgrounds within the park (North and Sunset), set within the area’s beautiful, iconic ponderosa pines. Both are available to RVers as well as tenters and have flush toilets and drinking water; there’s coin-op laundry and showers in the general store. Some sites are reservable, but most are first-come, first-served. Discounts are available for National Park Pass holders.

If you prefer indoor lodging, you’re in luck — the Bryce Canyon Lodge, located a short walk from several trails and lookouts, is a national historic landmark and the last remaining of the original park buildings constructed in the 1920s. It’s a no-smoking facility and, to maintain its authentic rustic feel, there are no televisions. The lodge’s unique design and use of local materials will take you back to a time when all the national parks of the West featured “destination hotels” to attract visitors.

The options for exploration around Bryce Canyon are seemingly endless. For a large part, this is wild and untamed land; getting off the beaten path and finding your own slice of unblemished nature isn’t difficult. For less-developed excursions, head into the massive Grand Staircase-Escalante National Monument for day and backcountry hikes, mountain biking, climbing and canyoneering, fishing, horseback riding, and off-roading. I highly recommend the Lower Calf Creek Falls hike, an easy 6-mile round-trip walk to a gorgeous 126ft waterfall. The trail is accessed from the Calf Creek Campground, located about halfway between Escalante and Boulder — towns which both are worth a visit in their own right.

For something a little different, just over 70 miles to the south is the town of Kanab, also known as “Little Hollywood” due to the number of feature-length westerns and television shows filmed in the area. Check out the Little Hollywood Movie Museum, where they’ve preserved some of the old movie sets, and take in their “How the West Was Lost” skit.

And of course, Zion National Park is only 70 miles to the southwest. Coming from the direction of Bryce Canyon, entering Zion from the east, you’ll drive through the Zion-Mt. Carmel Tunnel, a historic 1.1-mile drive that deposits you atop some of the most scenic switchbacks you’ll ever drive as you descend into Zion Canyon. The only way to know which park you’ll enjoy more — Zion or Bryce Canyon — is to visit them both, and Southern Utah makes it pretty easy to do just that.