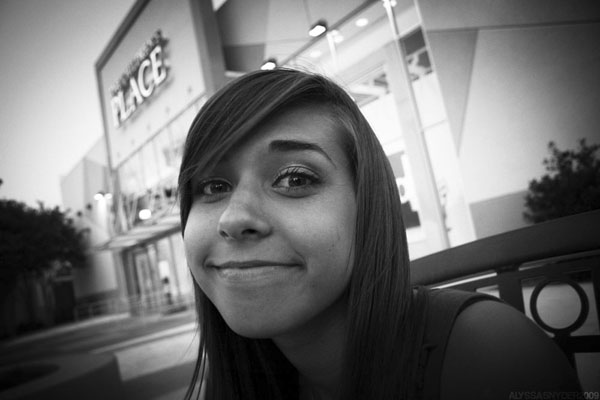 While far from the first attraction I’d visit in any city, they do have their place.

I’ll just say it. I hate shopping malls. They’re bland and sterile and full of scary looking teenagers. But I grudgingly accept that not everyone shares my point of view, and fair enough. Lots of people love shopping and shopping malls, and I will admit when I’m impressed by the architecture. Plus, I do enjoy the air conditioning when it’s 38 degrees Celsius outside.

The website GotSaga has published what they think are the world’s most incredible malls. Here are some details on the more interesting of the lot: 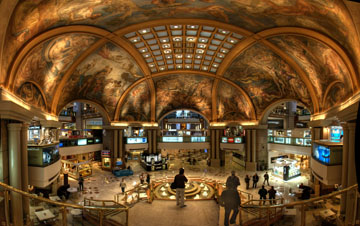 Originally built in 1889, Galerías Pacífico was remodeled in 1945 and the famous 12 frescos on the central cupola were done in ’46.

For history buffs, part of the mall was used as a torture center by the military junta who ruled Argentina from ’76 to ’83.

In 1987, a film crew was shooting in the basement of the Galerias Pacifico, one of Buenos Aires’ plushest downtown malls, and to their horror they stumbled on an abandoned torture center.

It turned out that during the dictatorship, the First Army Corp hid some of its disappeared in the bowels of the mall; the dungeon walls still bore the desperate markings made by its long-dead prisoners: names, dates, pleas for help. 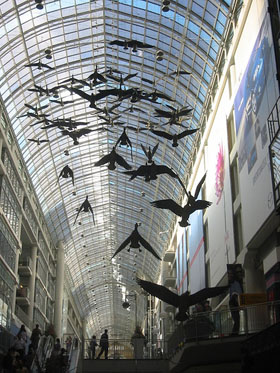 Timothy Eaton started it all by setting up a dry goods shop on the original site. This eventually became the Eaton’s brand that swept across Canada and changed the way people shopped. The company went bankrupt in 1999, but the mall retains the name.

I was shocked to read that the Toronto Eaton Centre is the top tourist draw in Toronto, pulling in about one million people per week.

That’s almost 100 people entering those doors per minute. What does this say about the city and/or the tourists? I don’t know myself, but it might be worth asking.

Interesting tidbit: a gaggle of fibreglass geese — a sculpture by artist Michael Snow called Flight Stop — is one of the main attractions in the mall and was the center of a controversy when the mall decided to dress them up in red ribbon for Christmas.

They didn’t bother to ask the artist, and predictably he was pissed. Eventually, a court ordered the ribbons removed. 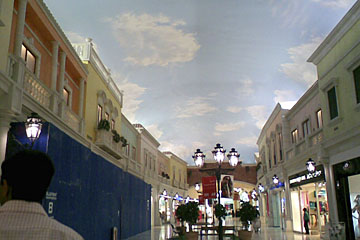 I was intrigued by the picture of a “faux” Venice in the Villagio Mall, but the article didn’t have much info.

Neither did Wikipedia. So I found this first-hand account at Travelpod:

…it’s like the Truman show. The mall is a model of Venice, complete with a canal and gondolas and a ceiling designed to look like the sky.

Above every store are mock balconies as if you are really in a city…If you follow the canal through the mall you arrive at…you guessed it…an Ice Rink! 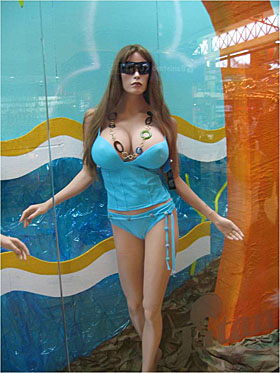 This mall wasn’t on the list, but I feel compelled to include it. Matador Life editor Leigh Shulman passed this to me when she heard I was going to write about malls.

Here is what Leigh had to say about the mall:

We spent a day there while waiting for a bus. It’s got everything from a merry go round, movie theatre, kids play space etc etc.

But what struck me the most is the store mannequins that had the biggest breasts of anything I’ve ever seen in my life.

At Matador, we try not to leave anyone out, including shoppers. Veil Shopping in Cairo has exemplary tips for, well, veil shopping in Cairo. Tom Gates’ hilarious piece Bangkok Binge Eating 101 profiles a slightly different type of shopping, but shopping nonetheless.

[poll id=”2″]
What did you think of this article?
Meh
Good
Awesome
Bookmark
Posted In
Trip Planning