Taciturn San Francisco-based film collective The Seventh Movement released its video of the celebration of the Golden Gate Bridge’s 75th anniversary with a simple tweet: 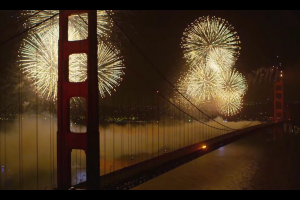 “we dont think anything really needs to be said…. http://fb.me/1TXtWJcYm”

While these guys are taking the minimalist approach to promoing their video, people like local designer Melissa de Mata are busy getting the word out:

“This makes me so fucking happy to live in SF https://vimeo.com/43004940 by the talented men of @seventhmovement #GoldenGate75 #MustWatch”

The Seventh Movement have put together a list of great videos on subjects ranging from artist profiles to Formula 1 racing. What makes this video stand out, for me, is that it was edited and posted less than 24 hours after the last embers drifted into the bay.

Be sure to check out some of their other projects on their website.