ONLY IN COLORADO does the world look like this. Canyons so narrow they see no sunlight, red rock formations springing out of dusty plateaus, ancient pueblos built into cliff faces, glacial lakes reminding us of our icy past — few places are as diverse as the Centennial State. Unsurprisingly, it has a roster of national parks, preserves, and monuments to prove it.

We’ll open with a few shots from Colorado’s best-known natural destination, Rocky Mountain National Park. But did you know there are four other NPS sites just as worthy of your attention (and your camera)? Let’s explore the list through these 24 images, from the lake valleys of Rocky Mountain to the rim of Colorado National Monument.

The 5.3-mile hike on the Glacier Gorge Trail takes you to the bottom of Half Mountain and right to the shores of Mills Lake, named for Enos Mills, the "father of Rocky Mountain National Park." This is one of the most popular destinations in the park, so it's best to go early. Make the trek, and you'll enjoy Alberta Falls along the way.
Photo: Steven Bratman

Nymph Lake from above

Rocky Mountain is sprinkled with glacial leftovers, and Nymph Lake is one of them—though, ultimately, this 3.5-mile trail leads to the larger Emerald Lake. There are outstanding views of several peaks along the way, and if you're willing to get up early, you might catch a shot of their morning reflections on the still waters below.
Photo: Andrew E. Russell

You'll catch the fall colors here earlier than usual—the aspens start turning in late August and continue through September. On the west side of the park near Grand Lake, look for them in Kawuneeche Valley and Fairview Curve. On the east side closer to Estes Park, scout out stops in Hidden Valley and on Bear Lake Road.
Photo: Ed Ogle

There are eight topaz-colored pools that occupy the Gorge Lakes basin, making the challenging 10.5-mile hike (one way) well worth it. This is a more solitary trek than most, and it's best split up over two days. That way you'll have time to give the lakes, alpine slopes, cascades, and marshy meadows that surround you the attention they deserve.
Photo: Ed Ogle

This 12'er lovingly referred to as "Mount Baldy" sits right above Grand Lake—the largest natural lake in the state, which gives its name to a town near the west entrance of Rocky Mountain National Park. The view from the top certainly makes for a stunning shot, but those taken from water level don't disappoint, either.
Photo: PhotoBobil

The edge of Grand Lake

If you stay in a cabin on the eastern shore of Grand Lake, you can have this view, too.
Photo: Don Graham

In Rocky Mountain National Park, sights like this aren't uncommon. Elk live at the higher elevations during warmer weather, and even come down into Estes Park for their famous fall migration. They take days to pass through, and cars barely faze them—when they're on the move, they're the undisputed rulers of the road.
Photo: Andrew E. Russell

Learn more: 12 facts about Colorado's national parks that will surprise you

Trail Ridge Road is the highest continuously paved road in the United States, and it runs through the park. The views from the blacktop are always good—but they're rarely better than at sunrise or sunset.
Photo: Andrew E. Russell

Half Grand Canyon, half Monument Valley, Monument Canyon—part of Colorado National Monument—is a beauty all its own, rising swiftly out of the Colorado Plateau just west of Grand Junction.
Photo: Schizoform

"The Monument," as it's often referred to, may not have the designation of a national park, but that doesn't mean it's any less majestic. This is 20,000+ acres of juniper forests, sandstone formations, and red rock canyons. The hiking options are virtually endless, and the scenic drives are some of the best in the state.
Photo: David Fulmer

Sunset at The Monument

If you can stick around for the last light of day, this is what you'll see. Hop on the Monument Canyon Trail (the lower trailhead is just off Hwy 340), or go for the Ute Canyon Trail off Rim Rock Drive. Either way, you'll get to watch the sunset colors paint the rock walls.
Photo: Glenn Merritt

This short-but-sweet hike is great for families, but the view at the end appeals to everyone. Colorado's best slot canyon can be found on the Alcove Nature Trail, which starts just across from the visitor center. This trail is where you'll learn the most about the monument and how it formed structures like the one pictured above.
Photo: DQmountaingirl

No canyon is as deep and narrow, and thus dark, as that which gives Black Canyon National Park its name. Some parts of the canyon floor are said to receive as little as 33 minutes of sunlight per day. And yet, when light hits the sheer cliff faces, the effect is dazzling. The subtle colors and striking formations—like the Painted Wall, visible in the image above—within the rock are at their most gorgeous during sunrise and sunset.
Photo: Mike Dewey

The Gunnison River is the sculptor of this canyon, and it drops an average of 34 feet per mile on its course through the rock. Get to Chasm View, and you'll see it drop 240 feet per mile. It might be the best place in the entire park to understand how Black Canyon's grandiosity came to be.
Photo: James St. John 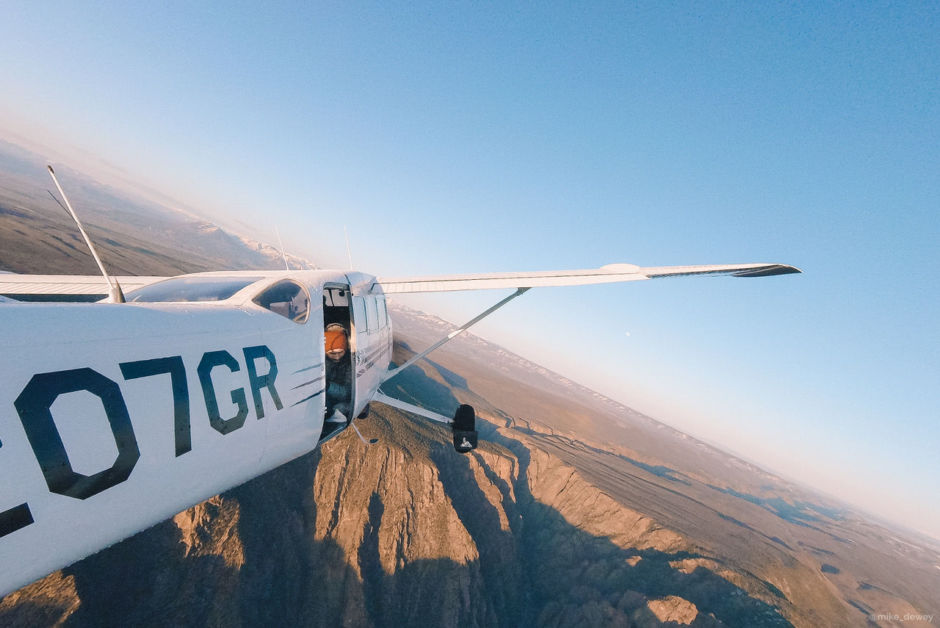 Black Canyon from the air

You don't have to take to the sky to appreciate the size and magnificence of Black Canyon...though of course it doesn't hurt. The park itself encompasses the most impressive 12 miles of the canyon, but from up here you can see that the great tear in the earth stretches much farther. Back on the ground, your best point of access is via the city of Montrose, from where it's a 15-mile drive to the south rim entrance.
Photo: Mike Dewey

This site has only enjoyed national park status for a little over a decade—prior, it was a national monument. Perhaps as a result, fewer people visit the park than its more celebrated Western cousins, making its hiking, rafting, camping, or just plain viewing experiences all the more remarkable. Enjoy it all to yourself while you can—because with an appeal like this, and a full offering of adventures from the mild to the extreme, bucket listers are bound to catch on soon.
Photo: Richard Hurd

The largest archaeological preserve in the US, Mesa Verde National Park comprises more than 4,000 sites and 600 cliff dwellings and has been protected since Teddy Roosevelt's days. The dwellings were constructed nearly a thousand years ago and are still standing strong today.
Photo: Srikanth Jandhyala

Much of the park is accessible by roads that wind and climb among the mesas. It's slow driving...which is a good thing, when you have photo-worthy stops at pretty much every turn.
Photo: Ken Lund

The serenity of Mesa Verde

It's not all archaeological ruins and history—Mesa Verde is also quietly beautiful. There are plenty of hiking options, like Prater Ridge Trail, that take you past views like this.
Photo: Anthony Quintano

Pictured above is Cliff Palace, thought to be the largest cliff dwelling in North America. You can take the Cliff Palace Loop Road to see most of the sites (including Balcony House), but a ranger-guided tour gets you inside—don't miss it.
Photo: Lisa Redfern

Nope, not the Sahara. Great Sand Dunes National Park and Preserve showcases the tallest sand dunes in the US, and these hikers are making their way along Star Dune—the highest, coming in at 750 feet. It may not sound like much, but if you've ever tried hiking up a pile of loose sand, you can understand the challenge.
Photo: David Fulmer

The diverse terrain surrounding the dunes

It's not all sandy desert—the rest of this national park is alpine tundra and warm water wetlands. There's hundreds of species of birds and mammals in the area, and Big Spring Creek looks more like Alaska in summertime than a sandy next-door neighbor.
Photo: Brandon Satterwhite

What you're looking at is 440,000 years in the making. Sand and other particles exposed by the drying of ancient lakes have been shifted and sculpted by the particular wind patterns of the San Luis Valley to create these monumental dunes.
Photo: Gail Fisher

Peace in the dunes

What you can't tell from photos is that this is one of the quietest and least explored national parks in the continental 48. No shuttle buses, no lines of hikers slowing you down—make the trek out here, and it'll be just you and Mother Nature.
Photo: David Fulmer