New Zealand has so much natural beauty to offer, it can almost be overwhelming. One of the best ways to appreciate the stunning scenery of New Zealand’s South Island is to travel by train, from Christchurch on the east coast to Greymouth on the west coast.

The TranzAlpine Railway takes about four and a half hours, but given the epic views constantly scrolling past your window, you’ll wish it took a lot longer. Covering around 140 miles one way, it traverses the sprawling Canterbury Plains, yawning gorges and valleys, the Southern Alps and lush beech forests. It stops at several towns between Christchurch and Greymouth, but you can also use it to connect with various bus routes to explore the island. With one trip on the TranzAlpine, you’ll quickly realize why it’s not only considered the most scenic train route in New Zealand, but also one of the most beautiful in the world.

The TranzAlpine route operates daily all year round, and tickets can be purchased here. A one-way ticket from Christchurch to Greymouth starts at 133 USD for adults, and 90 USD for children. 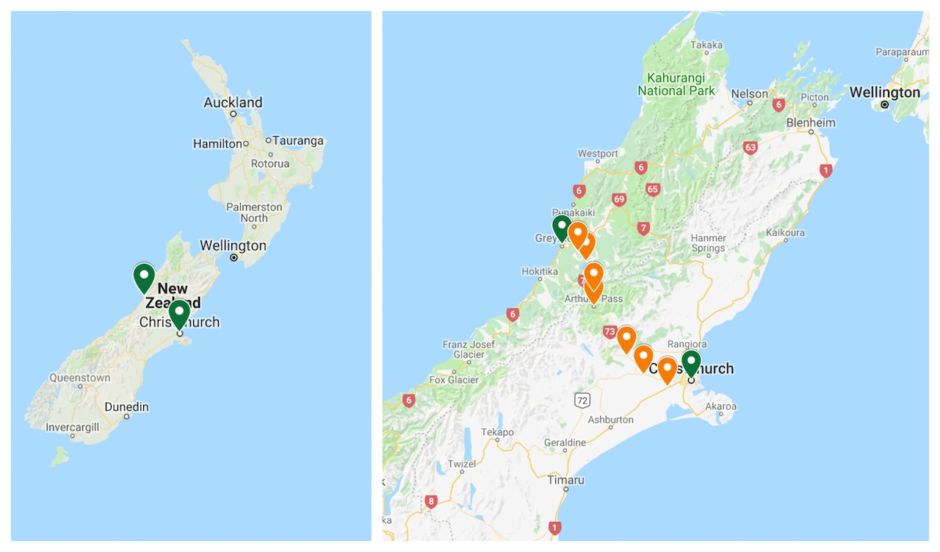 The TranzAlpine Railway departs from Christchurch on the east coast to Greymouth on the west coast. The train makes stops in Rolleston, Darfield, Springfield, Arthur’s Pass, Otira, Moana, and Kokiri. 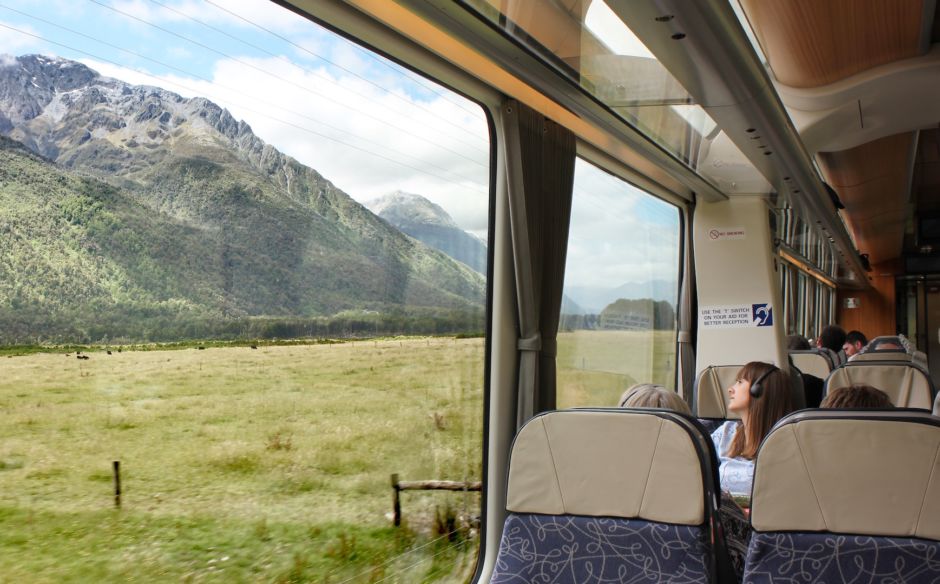 You probably care more about what’s outside the train than inside, but it’s good to know that the carriages from where you watch the landscape go by for hours are comfortable. In addition to a cafe car serving snacks, drinks, and light meals, each carriage is equipped with bathroom facilities, reclining seats, footrests, and tables. Side and roof windows are un-tinted, non-reflective, and panoramic, all to allow for the best viewing experience. There’s even an optional GPS-based commentary system to teach you about your surroundings in real time. 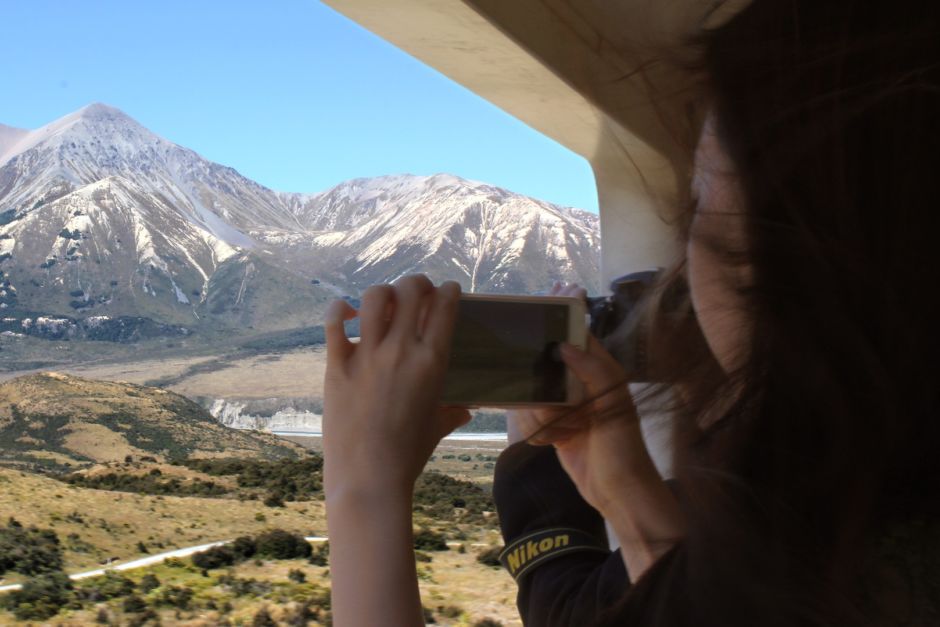 The views from the seats are spectacular, but if you want to stretch your legs and get a chance to take some truly incredible pictures, there’s also an open viewing carriage at the end of the train. There’s really nothing like passing through New Zealand’s Southern Alps and alpine forests while standing in the fresh air, watching the mountains go by. 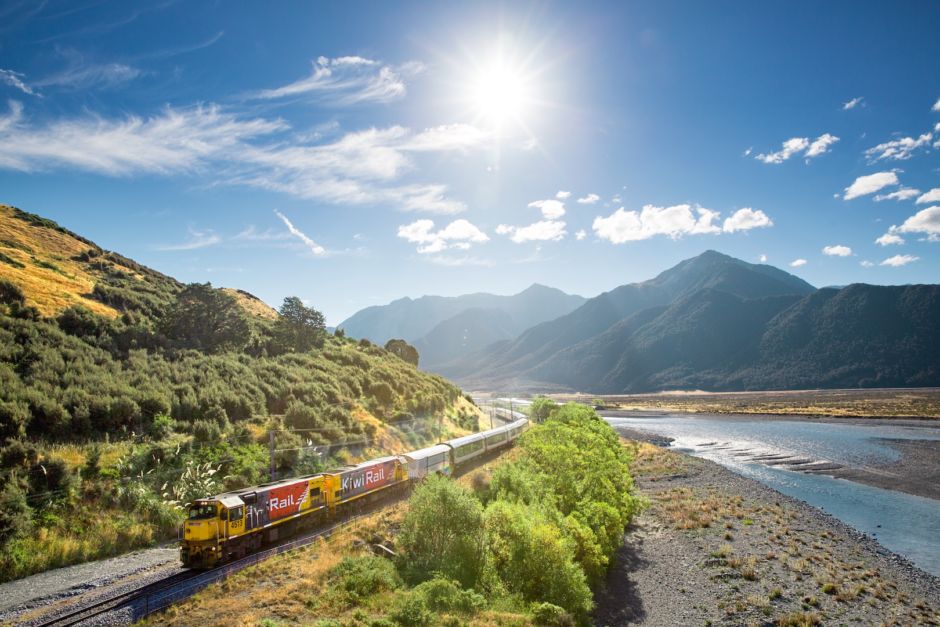 If your goal is to see as much of New Zealand as possible in one day, and experience the country’s rugged nature without roughing it on a long hike, the TranzAlpine Railway is one of the best options. The train makes stops in Rolleston, Darfield, Springfield, Arthur’s Pass, Otira, Moana, and Kokiri between Christchurch and Greymouth. And just because the train stops, that doesn’t mean the journey’s over. Greymouth is a great launching point for exploring the Franz Josef and Fox glaciers to the south, along the West Coast. 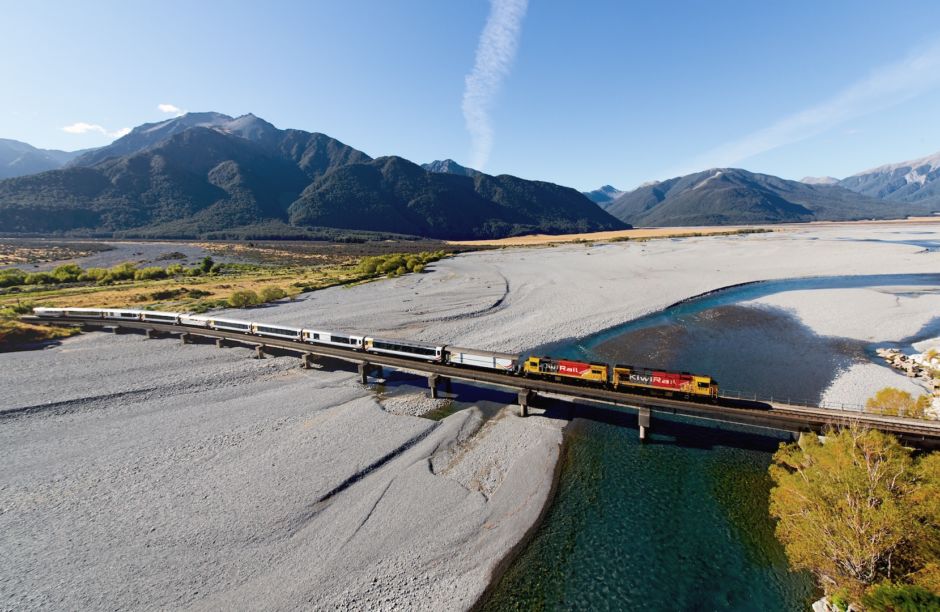 The Waimakariri River runs through a narrow canyon before approaching Canterbury Plains. As the train crosses the bridge over the river, and goes through a series of short tunnels, you’ll be in the heart of a truly unspoiled region of New Zealand. The area marks the beginning of the ascent into the mountains. 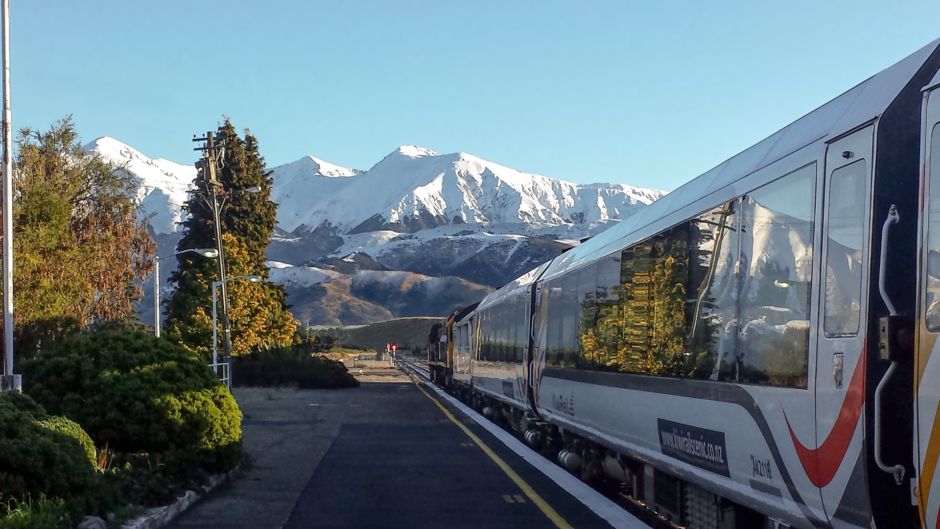 Springfield and the Torlesse Range

Springfield may be a small town with a population of just 219, but the area is home to some of the South Island’s most beautiful scenery. As the train passes through Springfield, it skirts the Torlesse Range, an imposing mountain range defined by its high-altitude grasslands. From the plains around Springfield, the Southern Alps rise up, making it one of the route’s most popular views. 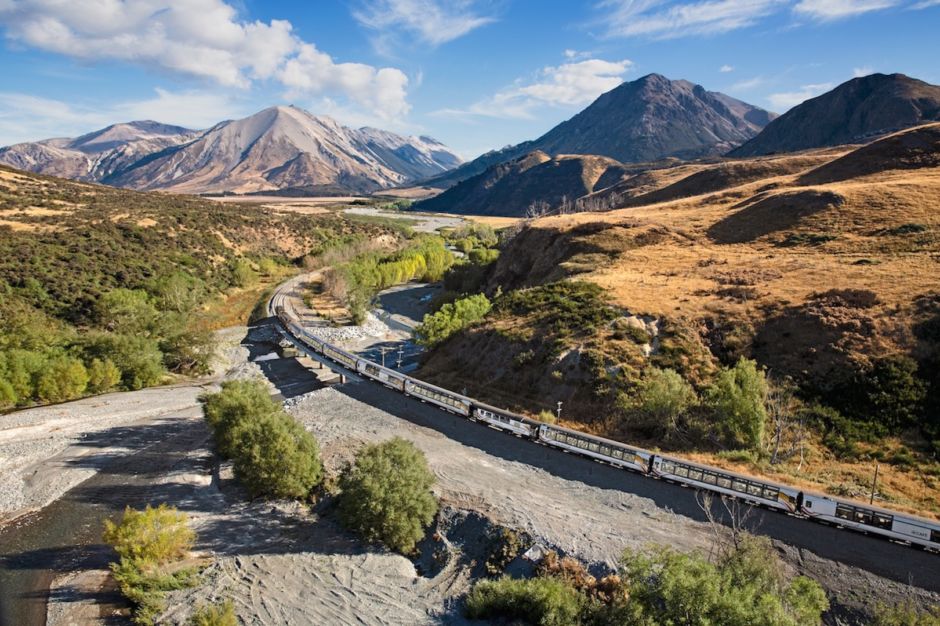 Cass and the Craigieburn Mountains

The Cass River flows alongside the Craigieburn mountain range before meeting the Waimakariri River. The TranzAlpine journey will take you through this beautiful part of New Zealand’s wilderness, between the locality of Cass and over the bridge that crosses the river. 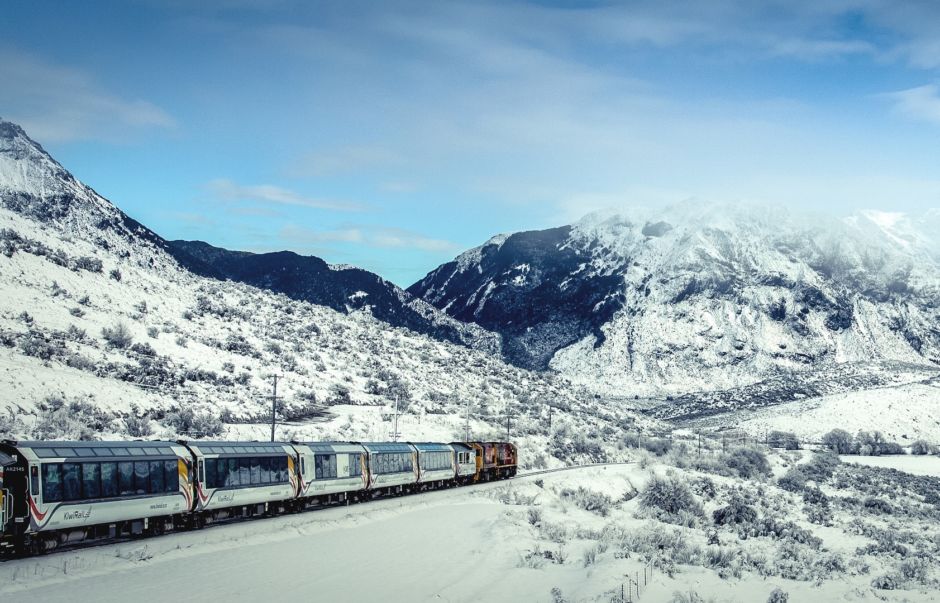 Surrounded by mountains, Lake Sarah is one of the most memorable parts of the TranzAlpine journey. As the train descends down the high plains from Cass to Craigieburn, you’ll see the lake at the foot of the Sugarloaf mountain. The lake is replete with trout and it’s common to spot fishermen from the train window standing on the bank, casting their lines in the water. The area is especially magnificent in the winter months. 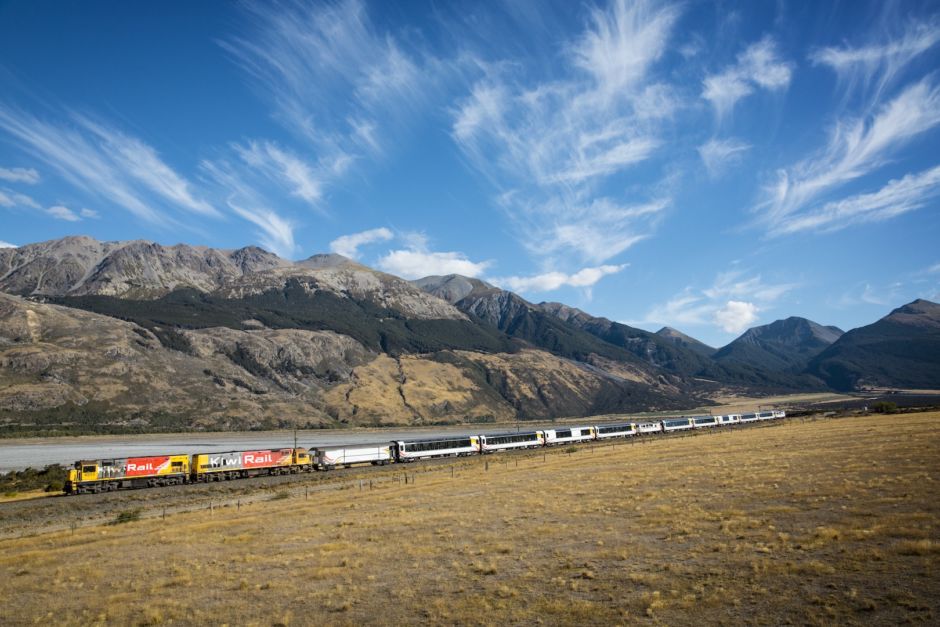 Traveling through the Craigieburn Straight will give you some of the trip’s most iconic views. On the way up to the plains of Craigieburn, you’ll pass through 15 short tunnels and over four dramatic viaducts, including the famous 236-foot-high Staircase Viaduct. From across the high plains, you’ll have a perfect view of Mt. Binser and the outskirts of Arthur’s Pass National Park. 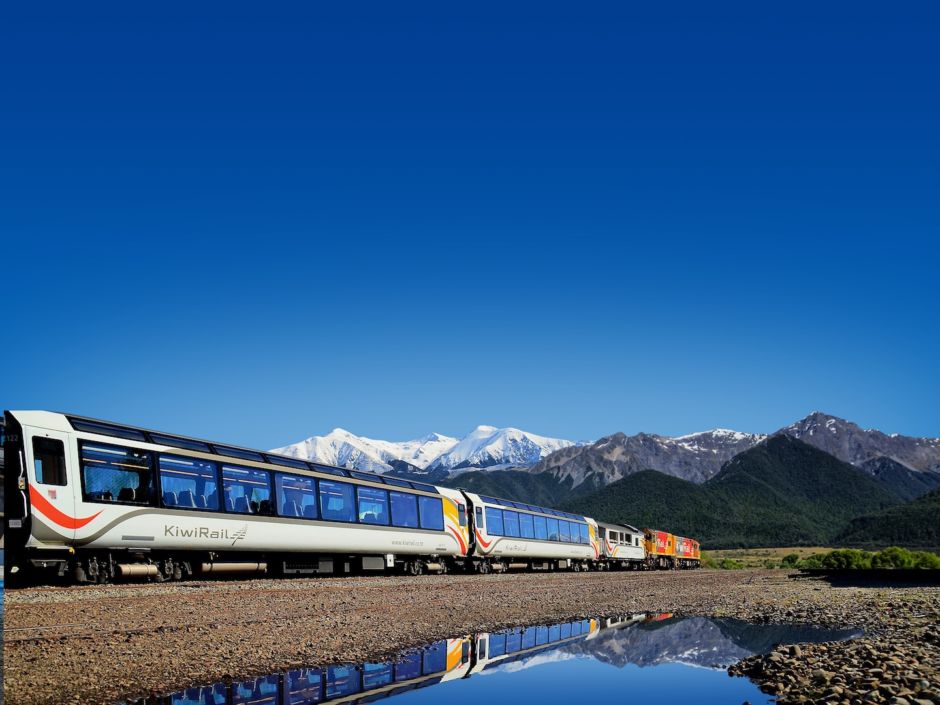 For many years, the Alps were a barrier in New Zealand, forming a boundary between territories and making travel difficult. Now, journeying through the Alps is what brings many travelers to New Zealand in the first place. Whether their peaks emerge slowly from a mist, stand sharply against a clear blue sky, or you catch their reflection in a lake, glimpsing the mountains for the first time - and then carving your way through their valleys and canyons - is truly unforgettable. 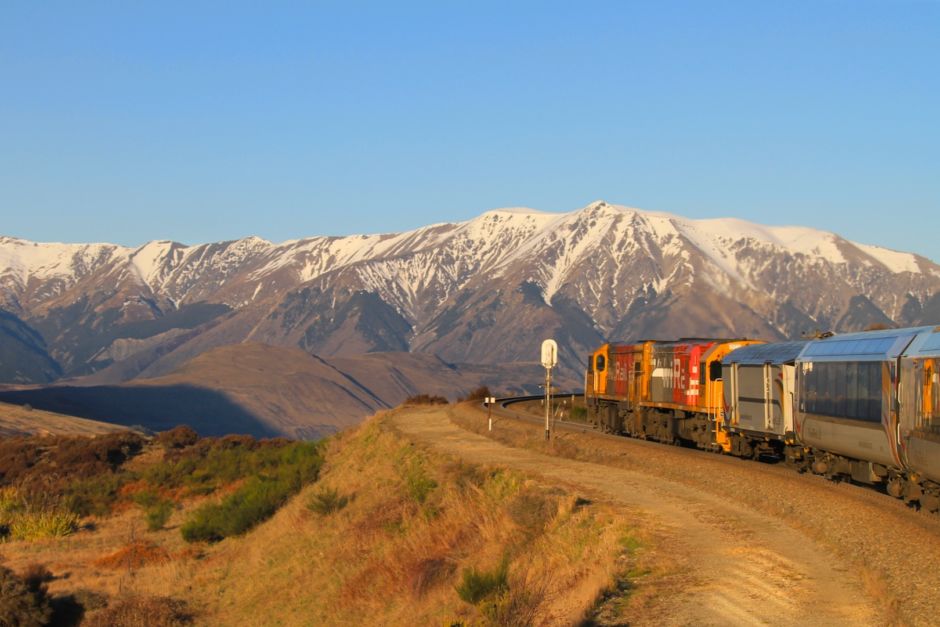 One of the trip’s most unique elements is the diversity of the scenery you’ll be exposed to. From lakes and rivers to grasslands and steep mountainous ascents, there’s never a dull moment aboard the TranzAlpine. Most passengers, however, embark on the journey expecting to marvel at the peaks of the Southern Alps, and they certainly won’t be disappointed.

Train TravelRiding The Ghan Is the Most Magical Way To See Australia
Tagged
Galleries Train Travel Travel Trip Planning New Zealand
What did you think of this story?
Meh
Good
Awesome