After losing his job, Kris Mole, a language teacher and former journalist from Brighton, United Kingdom, found himself stuck in a major rut.

He had been working in a seasonal position at a local language school with plans to travel to the Holy Land once the job was over. But following an accident that left him with a broken foot, he had to cancel his plans and couldn’t return to work.

The money he saved for traveling disappeared really fast and he was left with no money, no job and no idea what to do.

Then one drunken night on Brighton Beach, Kris told a friend that he had this idea to go traveling without any money. The friend laughed and told him it was impossible.

The following morning Kris couldn’t shake the idea from his head and within weeks he was flying to Sweden to begin the challenge of a lifetime: To visit every European Union capital city…without spending a dime.

“Three weeks after that night on Brighton Beach, I was on a plane,” Kris told me. “I had spent a couple of weeks figuring out how I could possibly get around and then I spent the last money I had on the ticket.”

Kris’ flight to Sweden left on the first of November 2007. His plan was to not return home until he had completed his challenge, despite having no idea how long it might take him.

“I wasn’t going to go back until I had done it,” he said, determined to prove everyone, including his family, wrong about whether he was capable of completing such a feat. Little did he know that his adventure would take him the next six months to complete.

Once in Sweden, the harsh journey really began.

“I started hitchhiking, jumping trains, seeing how far I could get until I got kicked off,” he explained. “If I did get kicked off, I would just try again. I slept rough, on the streets. In train stations and parking lots. Sleeping with couch surfers. Each day I would wake up with a plan for where I needed to go next and I would just leave in the morning.

But despite the fact that he knew no one and had no ability to pay for things, he only ended up sleeping on the actual streets seven times.

“It was incredible,” he said. “Couch surfing made it easier but there were many strangers I met that helped me along the way.”

One example of this was a Chinese man he met at the train station in Bordeaux, France. “He couldn’t understand something on the ticket machine because it was all in French. I saw him struggling and since I can get by in French I asked him if he needed any help,” Kris explained. “I got talking to him and said that I didn’t have anywhere to go. I asked him if he could buy me a loaf of bread, so I could eat something.” But rather than just buy him food, the man took Kris back to his home.

“He made me dinner, had a friend bring in a mattress for me to sleep on and gave me a place to stay for the night. If he hadn’t, I would have spent the night sleeping in the train station.”

According to Kris, that kind of thing happened in so many places. He would be convinced that he was going to spend the night outside and then someone would come along and show him kindness.

“Some people gave me food or bought me a meal. And I would go to bakeries and ask if they had anything that they weren’t going to sell. There were a lot of days when I didn’t have anything to eat as well.“

The days without food led Kris to lose almost 30 lbs over the course of his trip.

“I wasn’t getting too many nutrients,” he joked. “When I came back I felt so happy that I had finished it because I couldn’t have gone on much longer. It was physically exhausting.”

But aside from the physical toll the trip took on him, Kris also dealt with an emotional strain too.

“I didn’t realize at the time quite how lonely I was during the trip,” he told me. “Seeing everything that I saw and experiencing all those things, and not having anyone there to share that with. It was very lonely. But also, you get used to it. You put it in the back of your mind and make friends with the people you are spending time with temporarily.”

Aside from not spending money, one of the rules Kris had set himself was to not let women compromise the challenge.

“That went fairly well,” he laughed. “There were a few tests of that rule for sure. I made a few more friends along the way, lets put it that way. But I stuck to my original plan and didn’t let my mind stray too much. It was certainly more difficult not to get distracted then because I was younger.”

He kept in touch with his sisters via email during the six months he was gone, and wrote a blog so everyone else who knew him could keep up to date with his trip.

Despite the hard times, the trip wasn’t all bad and Kris got to see some amazing places and experience some incredible things, including one very smart dog.

“While I was in Sofia, Bulgaria, I saw a stray dog stop at a pedestrian crossing and wait for the signal to change before he crossed the street. Like a human,” he told me excitedly. “He walked to the curb and sat down. A man on the other side of the street pushed the button and when the signal changed, off he went. It was amazing. I will never forget that, ever.”

Kris’ journey included 26 countries and took him the grand total of 165 days.

“I was really happy at the experience but I would not do it again,” Kris stated. “Many people have asked me if I would do something similar on a different continent. Maybe it’s because I am older now, but I don’t think I would last another six months.”

On his return, his blog got turned into a book called Gatecrashing Europe. These days he is about to move with his girlfriend from Spain, where they have been living, to France. 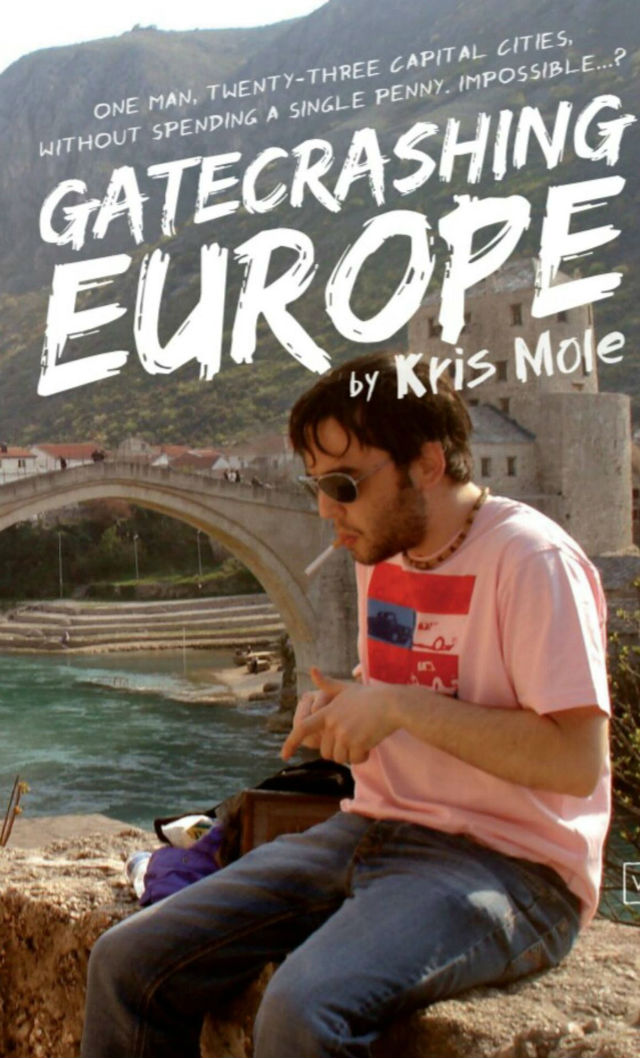 And more traveling is definitely in the cards.

“I have always wanted to go to South America. Chile and Nicaragua. But this time I will travel in a different fashion,” he said, proudly.

“Everything will be kept pretty basic but I will definitely have some money in my pocket this time as back up. I am done with the free experiences for now. I would rather pay my way.”

This article originally appeared on Yahoo! Travel and is republished here with permission.

Tagged
Budget Travel Financial Savvy Europe
What did you think of this story?
Meh
Good
Awesome

11 of the deadliest concert disasters in recent history
Woman gives out vodka shots in Miami airport after being stopped by airport security
The optimal itinerary for a US national park road trip, mapped
How to get around Miami like a pro, according to a local
7 Vail Airbnbs that make you feel like you’re in the heart of Bavaria

The best boutique hotels in Reykjavik for a stylish stay

The most breathtaking Airbnbs in Northern Norway near fjords and mountains

The most luxurious Airbnbs in Lofoten, Norway

Are houses on Airbnb really more affordable than hotels? This data set says no.

This tool shows you the best frequent flyer program for you, depending how many miles you fly

Is the travel insurance with your Chase Sapphire card actually any good?

If you’re a traveler or digital nomad, there’s a climate-friendly bank for you

Camping World will soon accept cryptocurrencies for your RV purchase