The downtown Seattle vicinity has top-notch accommodations for every budget with easy access to the city’s favorite sights. A bonus to this is that a good portion of downtown has a stunning view of Puget Sound. Along with top sights, there are countless dining experiences, live music, and art in the neighborhood. Below is a sampling of some of the best hotel, hostel, and Airbnb options Seattle has to offer. 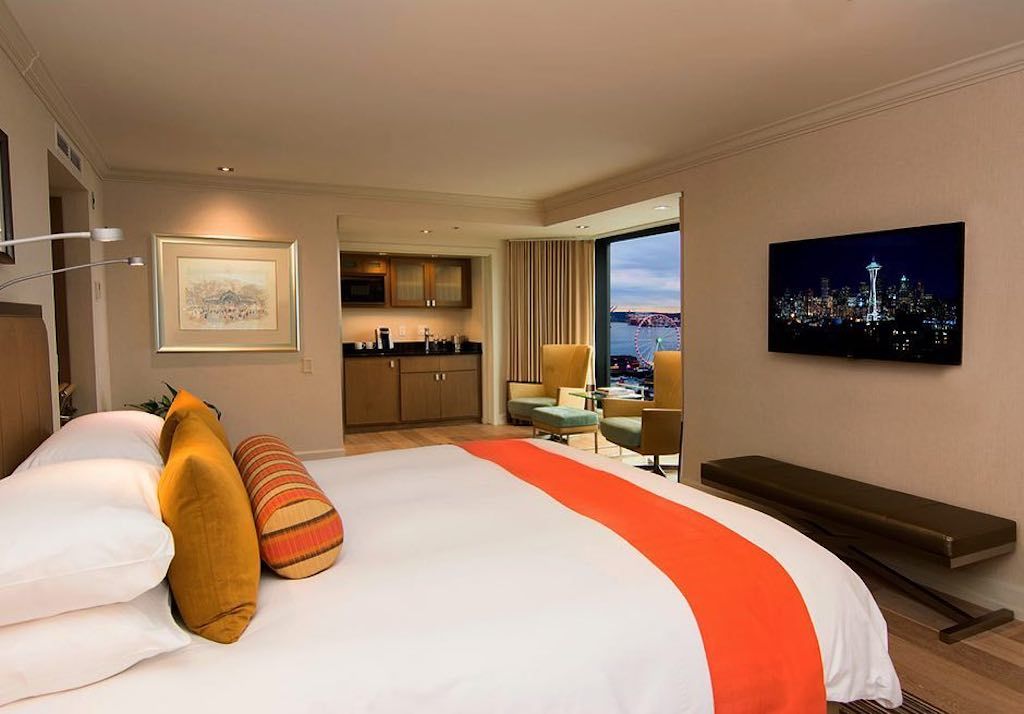 Photo: The Inn At The Market/Facebook

Inn at the Market — This is the only hotel located in Pike Place Market. Its modern rooms and suites have a view of downtown, Pike Place Market, the waterfront, Puget Sound, and the Olympic Peninsula. Amenities include in-room massages and an on-site salon. Guests can enjoy a cup of coffee in the morning or a glass of wine in the evening on its rooftop deck. Many delicious options for dining are available in the area, including Cafe Campagne, Sushi Kashiba, The Pink Door, and Kastoori Grill.

MarQueen Hotel — At the base of Queen Anne Hill, the MarQueen Hotel is just two blocks from the Seattle Center. Surrounded by restaurants and bars near Mercer Street, a stay at the MarQueen will be one of convenience and elegance. Originally built in 1918, this three-story brick building has spacious hardwood floor rooms filled with fine furniture. Each room includes a sitting area and kitchenette. The MarQueen has on-site services at Sarah Kahn Hair and Makeup and the French day spa, Jill Bucy Skincare. At street level, the 1920s Prohibition-era Tin Lizzie Lounge serves up food, hand-crafted cocktails, and music twice a week. 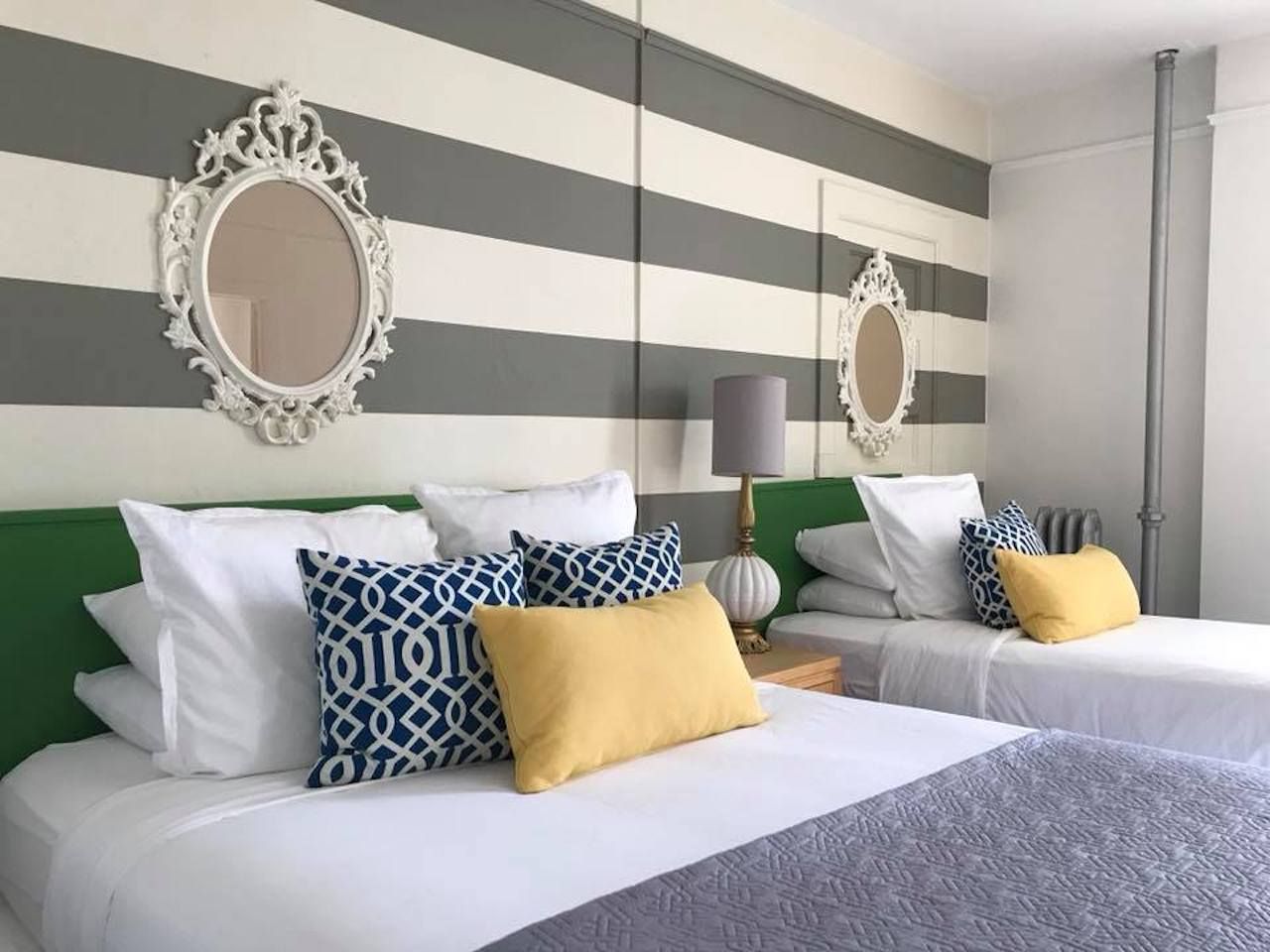 The Moore Hotel — The centrally located Moore Hotel on Second Avenue is in the same historic 1907 building as the Byzantine-style theater of the same name. It’s just a couple of blocks to Post Alley, Pike Place Market, and the retail core shopping district. The style of the rooms incorporates simplicity and clean lines. Guests can choose from en-suite bath or the Euro-style room with the bath down the hall. Suites with kitchens and adjoining-style rooms are also available. On the street level you’ll find the Moore Coffee Shop and James Moore Bar/Kitchen with a South American menu, cocktails, and craft beer. 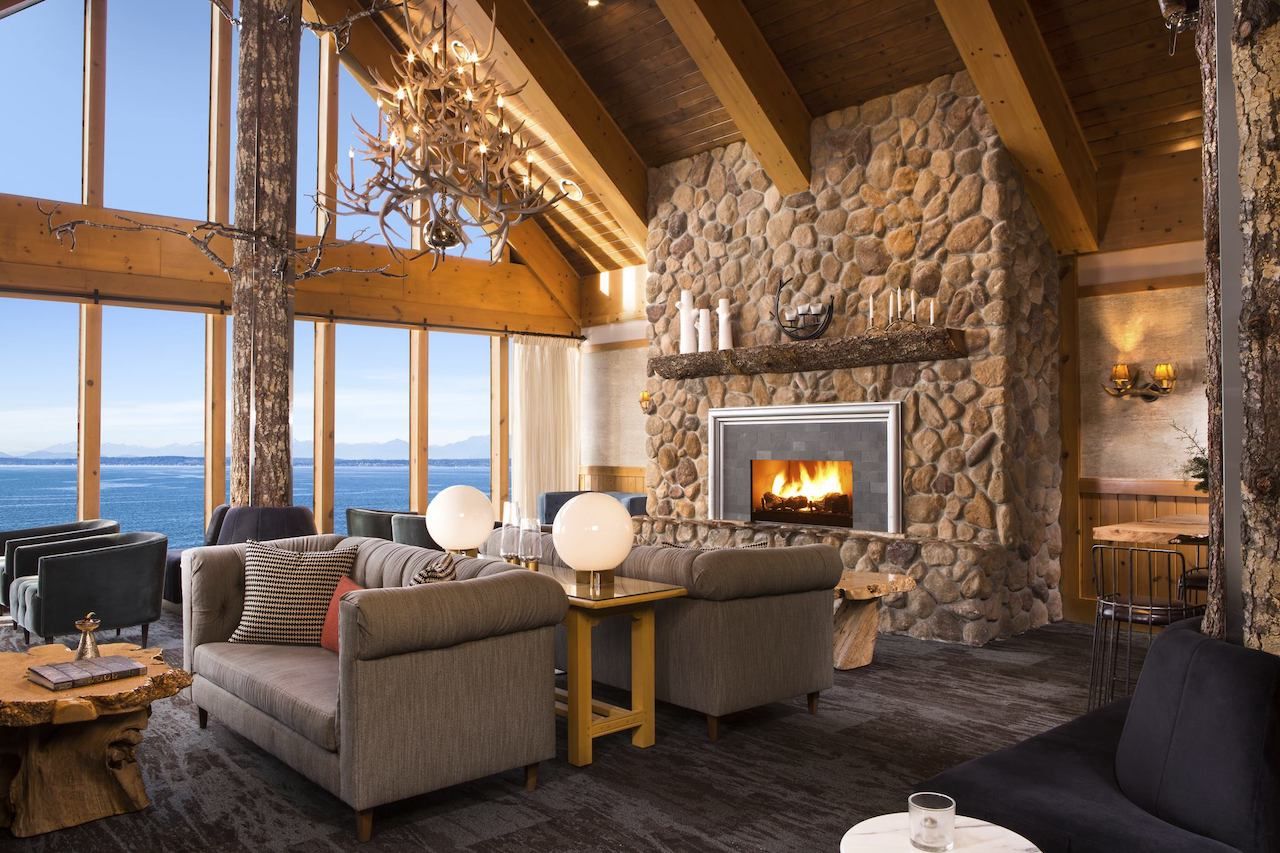 The Edgewater — As the only hotel on Seattle’s waterfront, The Edgewater sits over the water on Elliott Bay next door to the cruise ship terminals. Seattle Great Wheel, Seattle Aquarium, many restaurants, and tourist shops are a short walk down the waterfront. The Beatles famously visited the hotel during their first world tour (and fished out the window), and Anthony Bourdain listed it as one of his top 10 favorite hotels in the world. The Edgewater has guest rooms and luxury suites with views of either Puget Sound or downtown Seattle. Guests can enjoy dinner with a view of Puget Sound and the Olympic Mountains on the peninsula at its Six Seven Seattle Restaurant. And to top it off, it’s pet friendly. 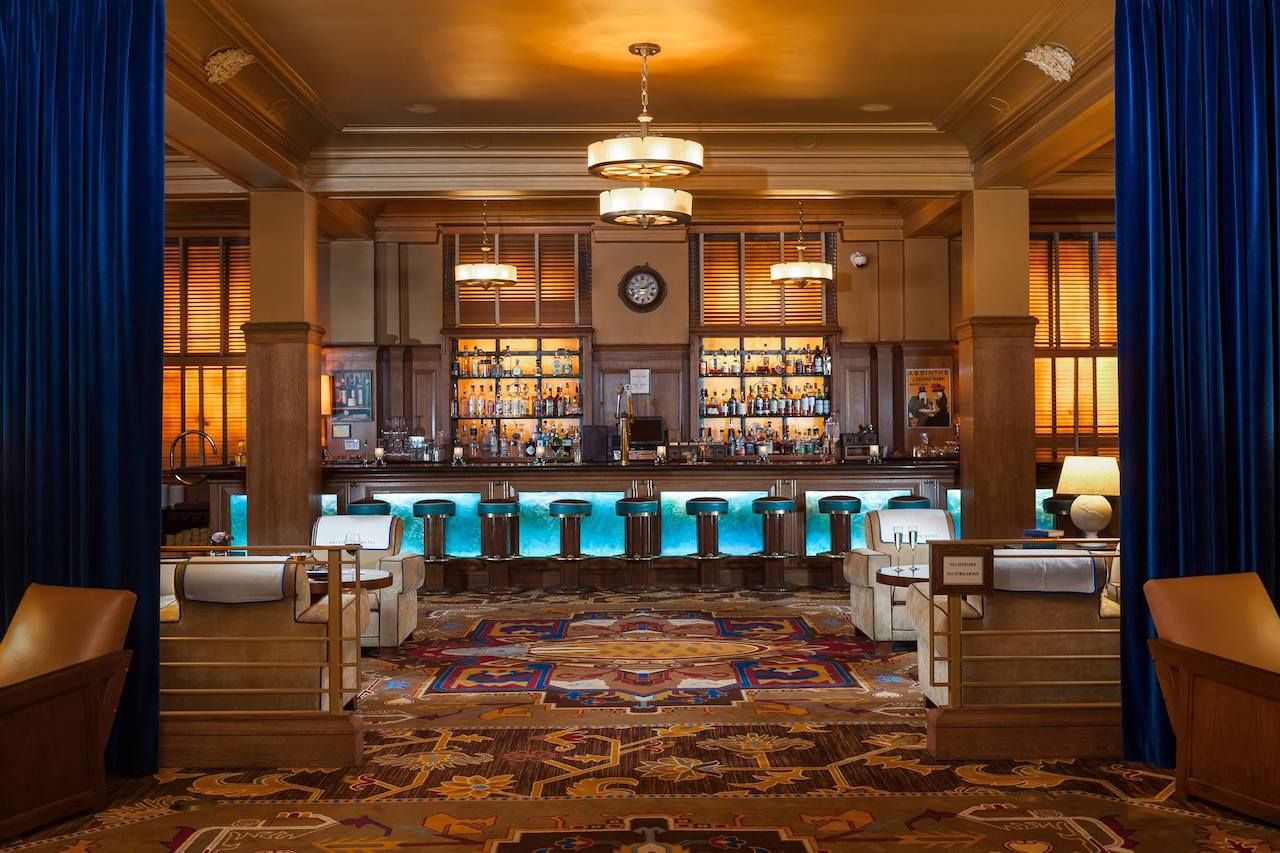 The Arctic Club Seattle — Poised between downtown Seattle and Pioneer Square, The Arctic Club Seattle is steeped in Seattle Gold Rush history and luxury. Commissioned in 1916, its Beaux-Arts architecture includes fun terracotta walrus heads with light blue and orange background lining its exterior. Guest rooms offer whirlpools tubs, private balconies, and views of Smith Tower. Its Juno Restaurant and Polar Bar are on site and the 76-story Columbia Center with its 73rd-floor Sky View Observatory is one block up the hill. 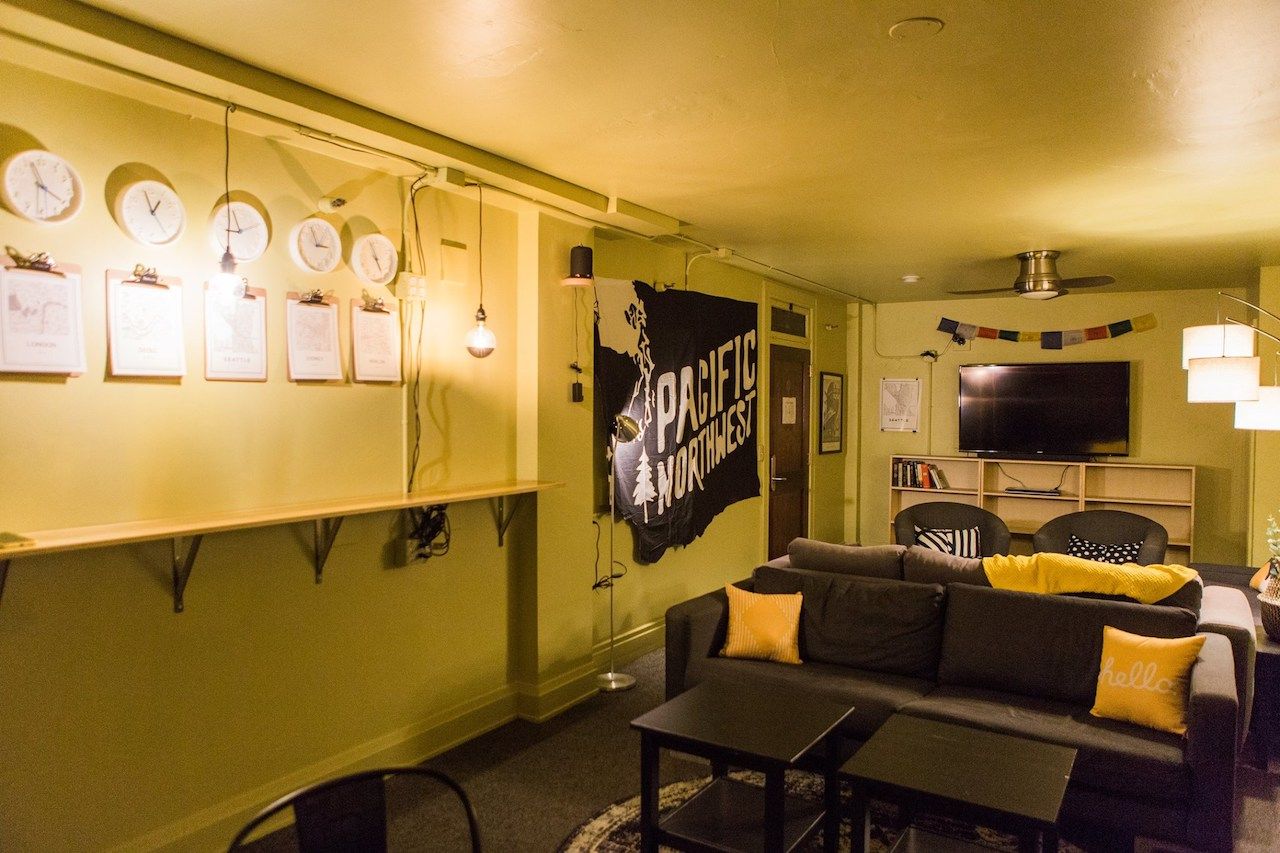 Hostelling International at the American Hotel — South of downtown Seattle in the Chinatown-International District, the American Hotel is on the same street as the 45-foot-high Historic Chinatown Gate. This hostel has separate male and female four- and six-bed dorm rooms and includes breakfast. It has private rooms for one to four people and a 24-hour kitchen. There are many authentic Chinese restaurants in the neighborhood to enjoy. You can learn about Seattle’s Asian community at the Wing Luke Museum of the Asian Pacific American Experience. If you like sports, Seattle’s main sports stadiums are just a few blocks away.

Green Tortoise Hostel — As the most central hostel in downtown Seattle, the Green Tortoise is conveniently located just across the street from Seattle’s top destination, Pike Place Market. The neighborhood is filled with live music venues, an art museum, coffee houses, restaurants, and bars. Housed in a historic three-story brick building, the Green Tortoise offers dorm rooms, private rooms, and family rooms, as well as a self-catering kitchen. The staff also organizes events every night of the week, such as pub crawls, game nights, movie nights at the hostel, and on-site parties.

City Hostel Seattle — In the heart of bustling Belltown on Second Avenue, City Hostel is central to downtown nightlife, but also just a short walk down to the waterfront. Some of Belltown’s most popular bars are on the same block. Buckley’s pub, with weekday food specials, and Tavolàta, an Ethan Stowell restaurant with happy hour pasta specials, are neighbors on either side. It offers four- and six-bed dorm rooms and private rooms with en-suite or shared bathrooms. A communal kitchen and an outdoor grill are available for cooking meals. This friendly hostel has the motto of “Enter as Strangers — Leave as Friends” over its doorway. 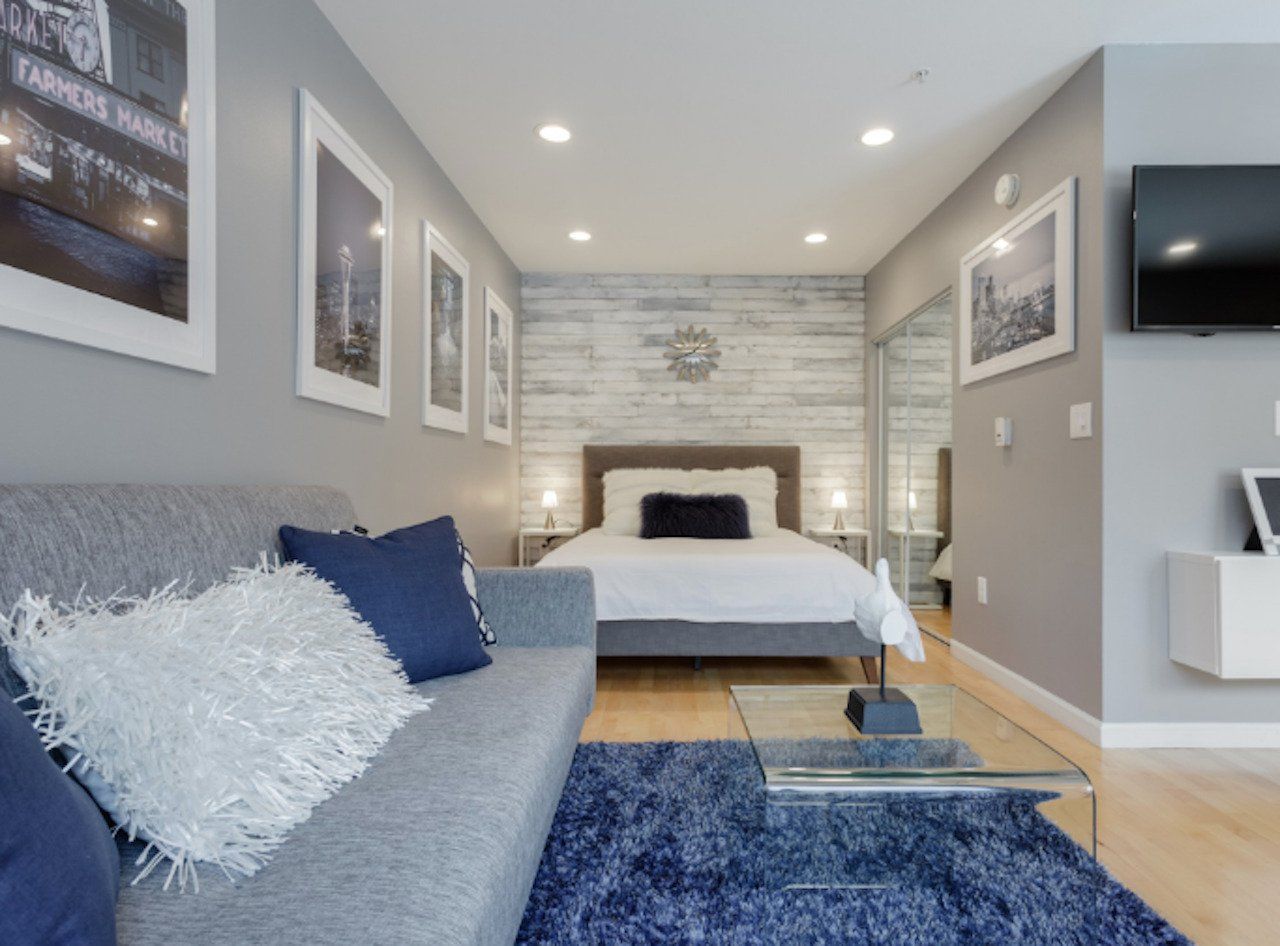 Modern studio in the heart of the city — This modern studio condo happens to be in one of Seattle’s original brick buildings in Belltown. The condo is easily walkable to top attractions including Pike Place Market and the Seattle Center. Some key features of this apartment are free parking, dishwasher, stacked washer and dryer, and rooftop patio. With cool tones of gray and blue, the open floor plan flows from the bedroom to the living room and full kitchen. Hosts, Alex and Jose have an Airbnb Plus home with nearly 100 reviews on their five-star rating. Self check-in is also available.

Art-filled industrial loft in South Lake Union — At the footsteps of Amazon’s headquarters in South Lake Union, this loft has everything you need to enjoy your stay. The modern glass building includes a rooftop deck with views of Lake Union and downtown Seattle. The living room is downstairs with a staircase leading to the open loft bedroom area. The full kitchen has a dishwasher, washer, dryer, and stainless steel appliances. Several restaurants are in the area, including a pizzeria, Serious Pie & Biscuit; a vegan restaurant, Veggie Grill; and sustainable food can be found at the Portage Bay Cafe. 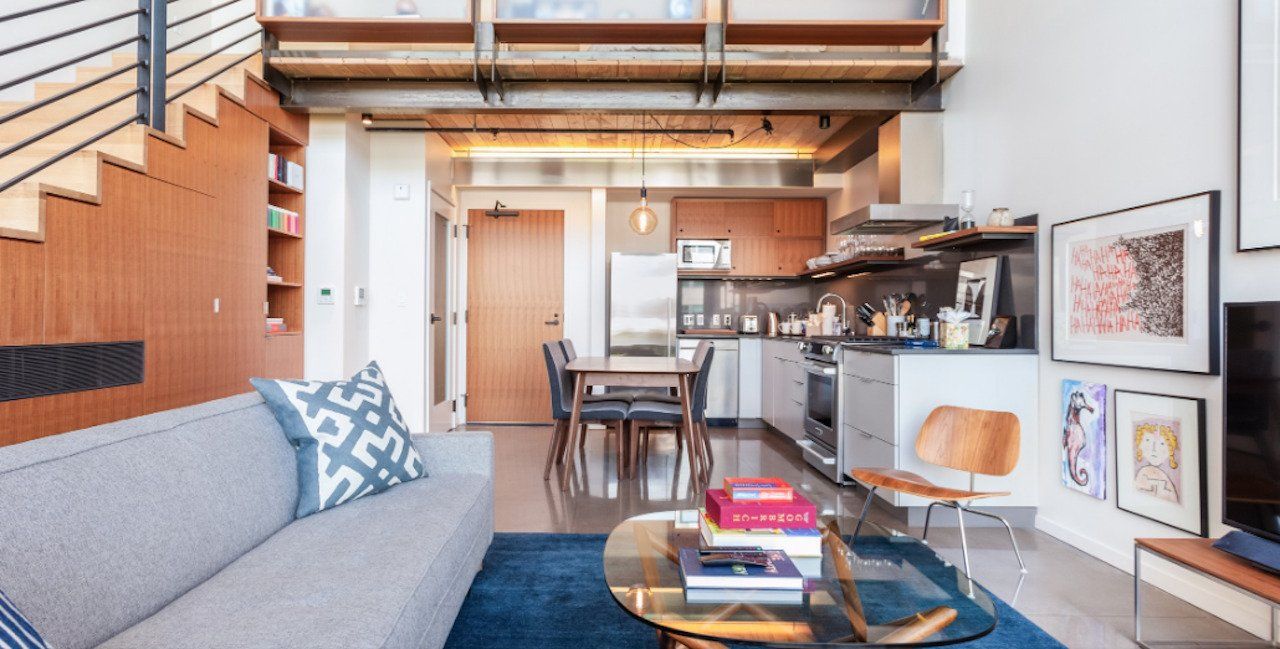 Historic loft in Pioneer Square — In the heart of Pioneer Square, this loft’s open floor plan is dominated by an ornately carved wooden wall unit nearly eight feet high serving as a headboard for the queen-size bed. An ultra-high ceiling is above the bed and living room. There is a full kitchen with a dining area, and a couch that turns into an additional bed with curtains for privacy. There are over 300 reviews for Leela’s five-star rating.