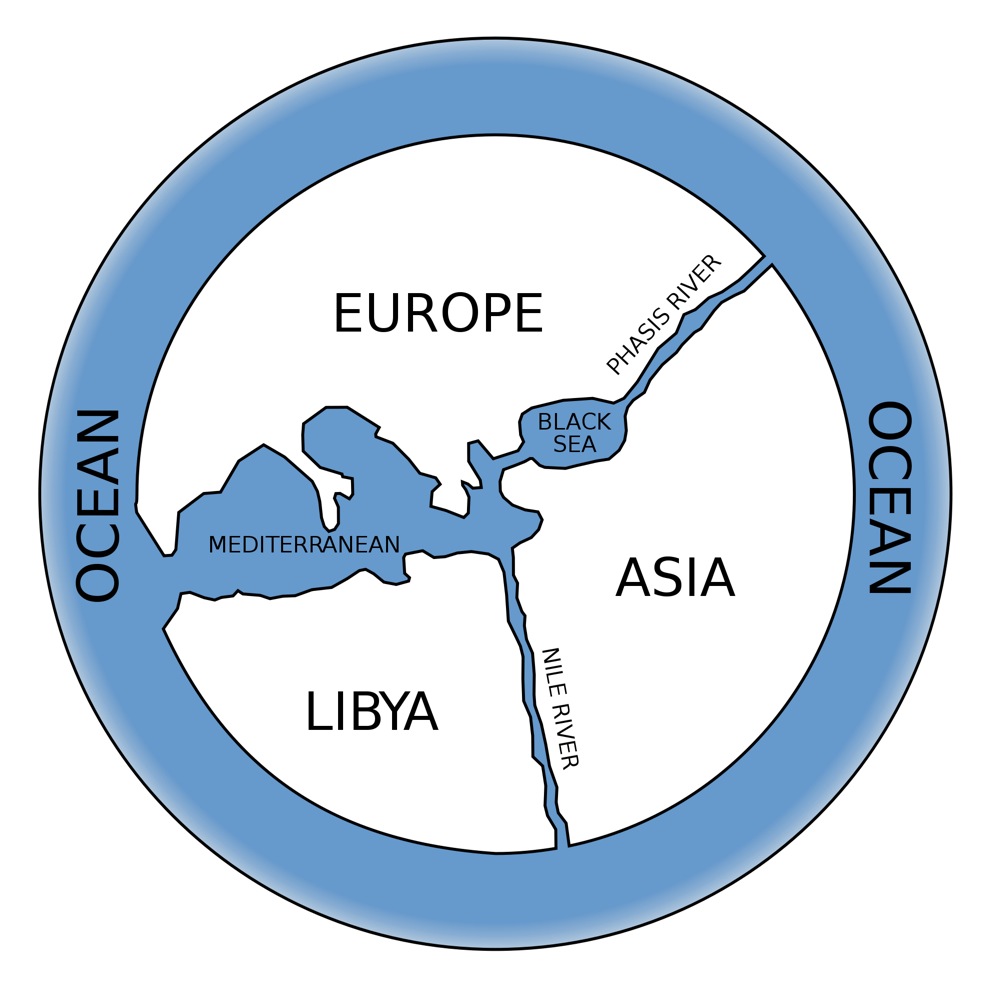 Anaximander was a Greek philosopher who lived in the 6th Century BC and was arguably the founder of cartography. His map is probably the first of the known world. Anaximander’s world was very different than ours: it included only the Mediterranean Sea and three major landmasses: Europe, Asia and Libya, which represents modern-day North Africa. Most importantly, it gave future cartographers something to build on and encouraged trade, exploration and unification. 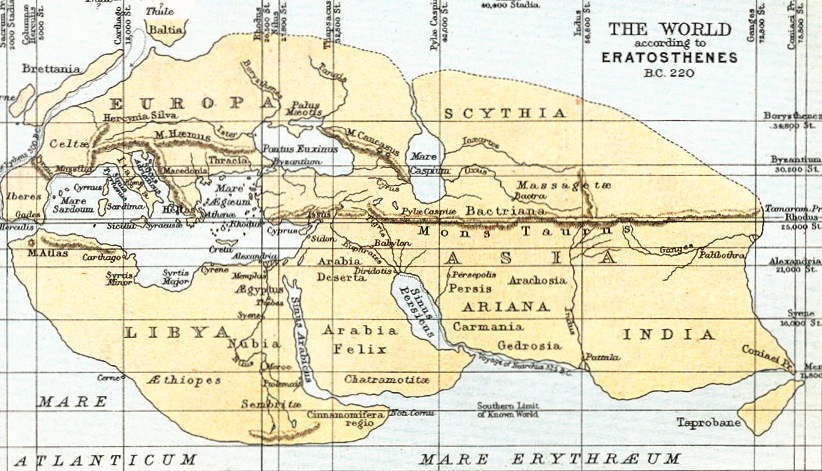 Fast-forward 300 years and the “Father of Geography” was born. Eratosthenes (another Greek) developed Anaximander’s map and other pioneers’ work, advancing the map of the known world. Eratosthenes inserted grid lines of longitude and latitude and suggested the existence of poles and equators on his maps. Four hundred cities and their locations were shown on his great work Geographika. Geography was born. 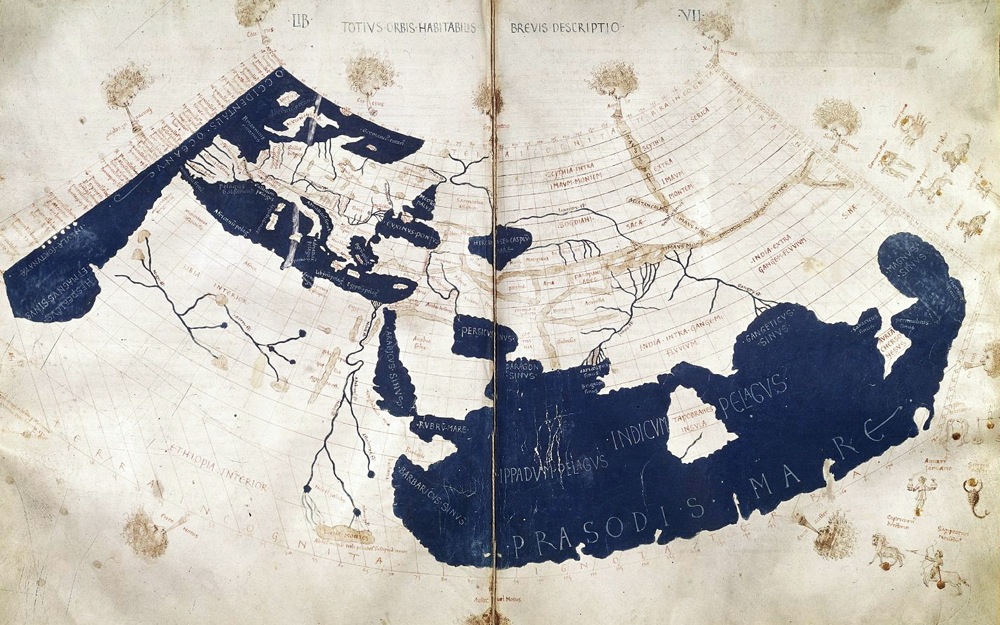 The Greeks pretty much had a lockout on early cartography and Ptolemy’s work only cemented this. The (*deep breath*) mathematician, astronomer, geographer and astrologer Claudius Ptolemy lived through the late first and early second century, yet his maps were still being used nearly 1,500 years later. Ptolemy recognised that he only knew a small portion of the world despite including far wider areas of land from China in the east to the mid-Atlantic Ocean in the West. Most of Europe was mapped along with larger areas of Africa. 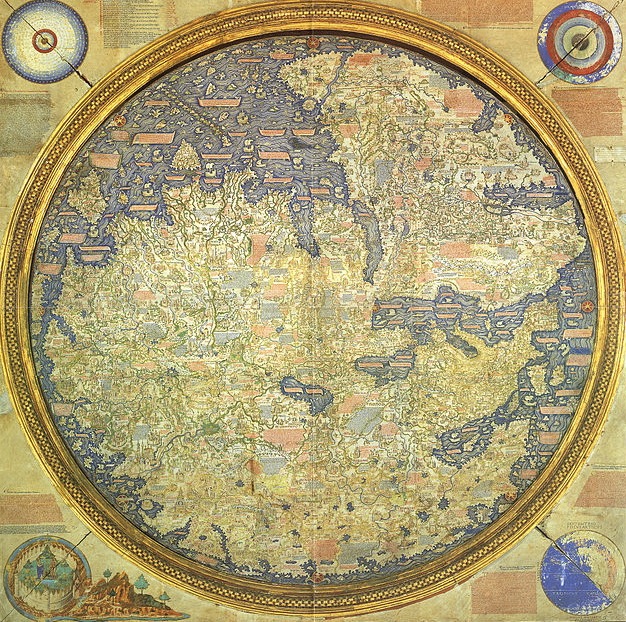 This guy’s not Greek! He’s an Italian monk and a bit of a hippie. His map is considered “the greatest memorial of medieval cartography” which is pretty special considering he drew it upside down. Far out, man. Despite the inversion, the map is exceptionally accurate compared with its predecessors. It includes detailed representations of largely unmapped areas of India, Africa, China and Japan. He was also one of the first to suggest that the Indian Ocean was not closed and Africa could be circumnavigated by her southern end. Or would that be northern…

This is why Greenland looks the size of Africa on Google maps. Gerardus Mercator’s 1569 world map is both a work of genius and controversy. Mercator’s map was designed for ease of navigation and to quote the man himself “to spread on a plane the surface of the sphere in such a way that the positions of places shall correspond on all sides with each other, both in so far as true direction and distance are concerned and as correct longitudes and latitudes.” The mathematics behind Mercator Projection are sound and thus it is the most popular map projection still used and so seen today. 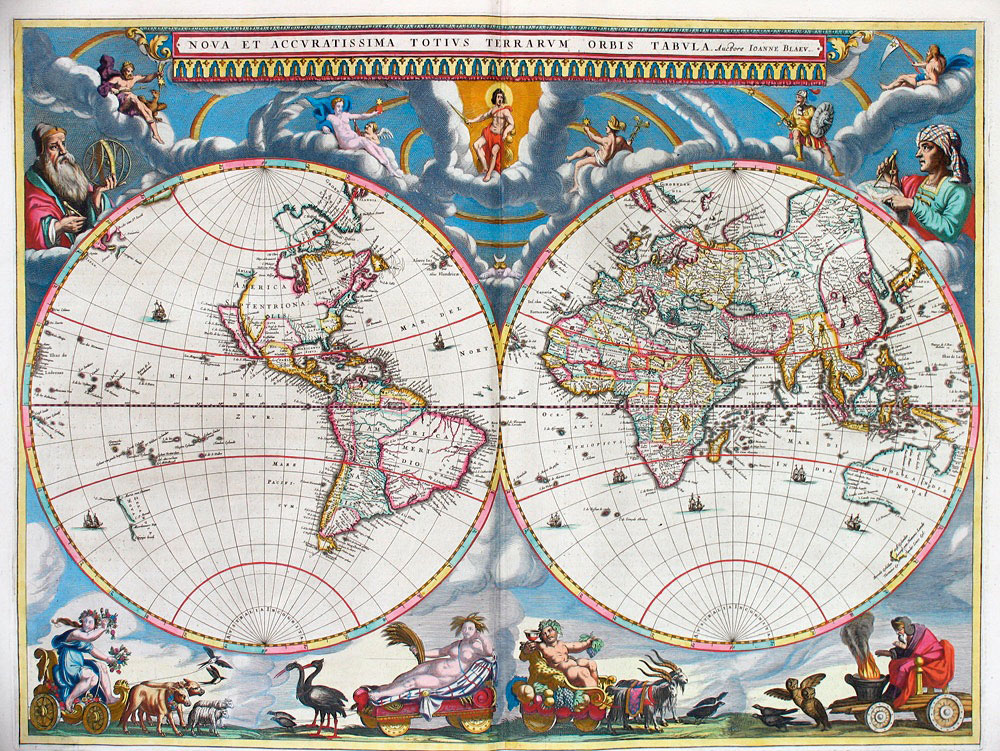 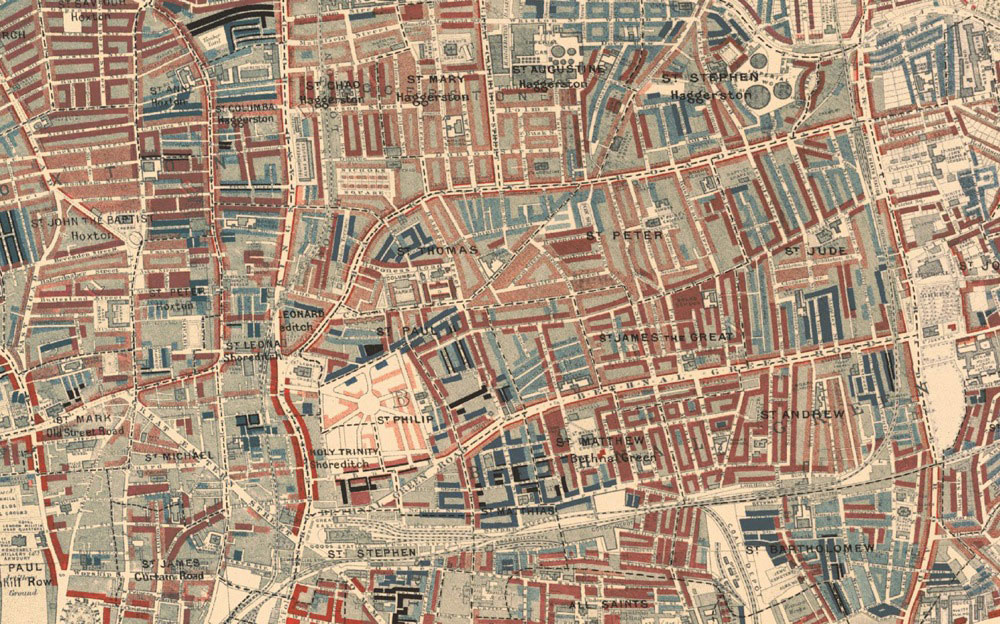 It’s good to know where the poor live. That’s what Charles Booth thought anyway. He was a London-based businessman who believed that estimates of poverty in London were overinflated. He set out to prove them wrong by creating this map and instead, proved just the opposite: that as many as one third of Londoners lived in poverty. The idea of plotting health and inequality across a map would prove invaluable in understanding social welfare and thus addressing it accordingly. 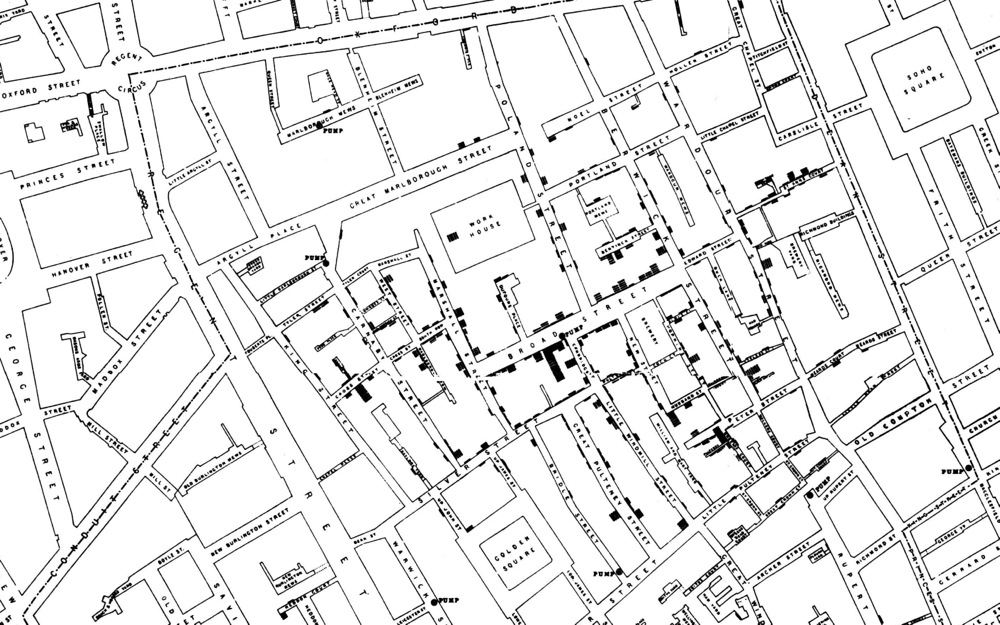 When cholera broke out in London in 1854, physician John Snow fought against the popular opinion that it was caused by “bad air”. He thought otherwise, and so started plotting dots representing known cases of cholera on a map of London. His method proved that it wasn’t bad air at all, but bad water from a street pump. The connection might sound trivial, but in reality Snow is responsible for saving millions of lives. His work was a major event in the history of public health and is regarded as the founding event of the science of epidemiology.

Thanks to these handy maps, whenever I go trekking across Dartmoor I know exactly where the nearest pub is. There’s a little blue beer mug marked on the map ensuring that every evening I can settle down in a comfy chair next to a warm fire and drink myself into my sleeping bag. Actually, these maps are some of the best and most important in the history of the world. The processes of trigonometry, geometry, and triangulation used in their creation were responsible for the advancement of cartography, navigation and discovery over the last 200 years. Not to mention the safety of British hikers. 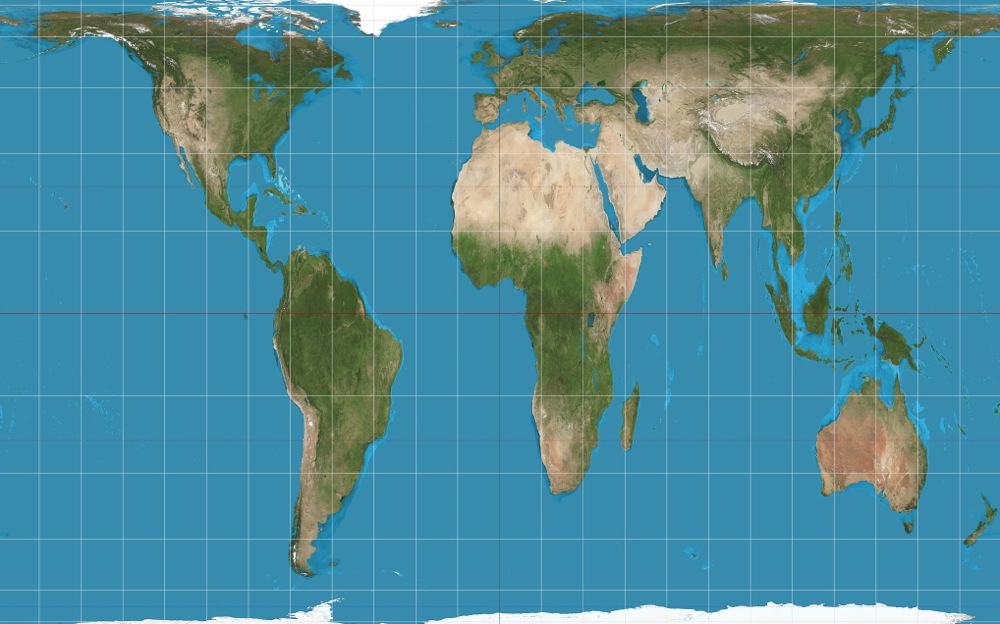 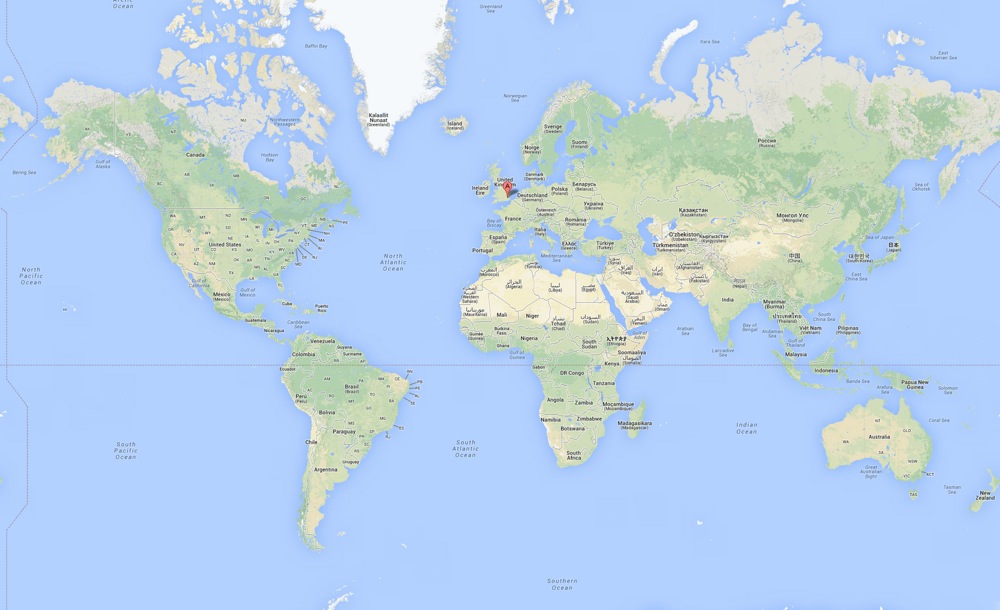 Google didn’t just change how we see the world with their online mapping service, they likely changed the world itself. Thanks to Google, we know exactly where our house is because that’s the first thing we all did when Street View was launched in 2007, wasn’t it? In fact, thanks to the various services and mobile apps, we know exactly where everything is, all the time. Kia won’t let us leave the house until we’ve looked up our destination on Google Maps. I’m less enthusiastic. They use the Mercator projection, you see. Bah. 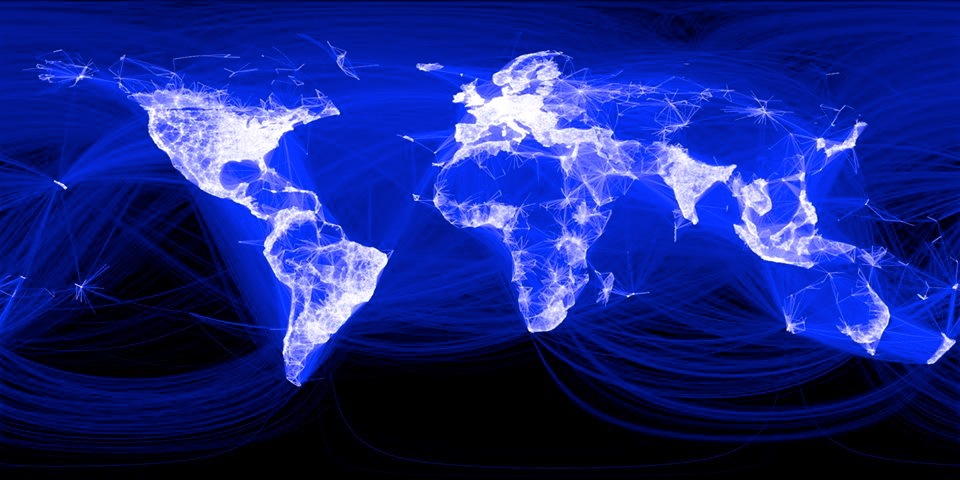 Facebook intern, Paul Butler, created this map based on where people live relative to their Facebook friends. He said the following: “What really struck me, was knowing that the lines didn’t represent coasts or rivers or political borders, but real human relationships.” In many ways, this is how the world is connected now.

This article first appeared on Atlas and Boots and is republished here with permission.