Lemon Creams were being sold at a dollar for three packets behind the concrete counter. They formed part of a wall of essentials in the shelved backdrop of the shop, a corner of which was dedicated to bright panels of clothing. Breakfast was half a pack of the cheap, barely zesty biscuits in a dusty car park. Early drinkers sat on the porch of the bottle store swilling brown barrels of Chibuku (homebrew) in their hands like giant Kinder eggs.

Binga is one of the remotest districts in Zimbabwe, and some of the locals share symptoms of neglect or persecution found in many exploited indigenous cultures the world over. Binga town itself seems to have been forgotten in the ’80s by the rest of Zimbabwean society, buildings like cadavers stuffed with the lowest grade of cigarette, brandy, and basic foodstuffs. The local Tonga people lived in the Zambezi Valley, which was flooded when the Kariba Dam was constructed decades ago to provide the nation with power. The locals were forced to move from the area in which they’d farmed, fished, and lived for centuries and now live on higher land, most without the power generated a few miles up the lake, with their huts still built on stilts far away from the water’s edge. A relic of the past, haunted by the present. 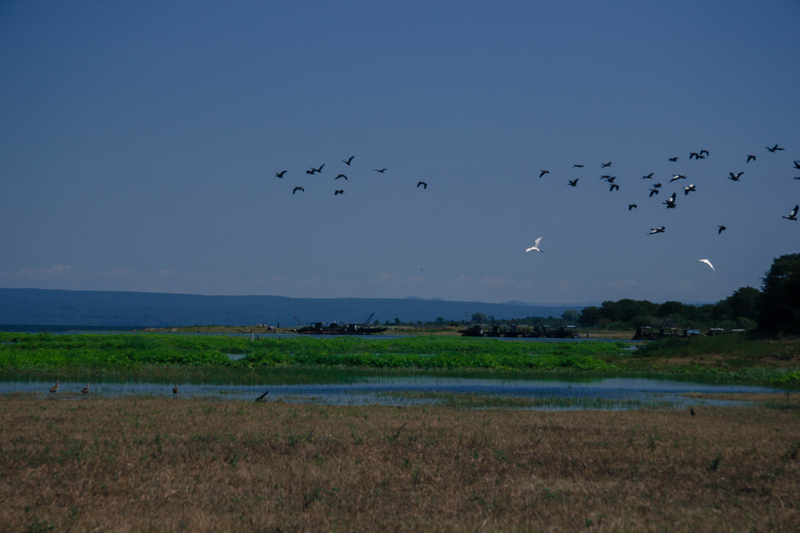 We called Marv to see how far away he was, and he told us to hop back in the car and keep going. His initial directions of, “You’ll see a bridge, then a hill, then a big tree on your right,” were hard to pinpoint on a road with hundreds of big trees, dozens of bridges, and no ‘hills’ to speak of.

Marvin Mutangara describes himself as “a nonconformist son of great African parents who taught me to lead and not to follow. Of the Soko Vhudzi Jena totem, whom I believe to be one of the first families to settle in modern-day Zimbabwe. Today I am Beat Viking.” Marv is a DJ, passionate conservationist, wildlife expert, and adventurer. He’s lived around Zimbabwe and in parts of Europe over the years and has been involved in a Ferris wheel of craziness along the way. Some of the more off-the-wall highlights of his life include “overlanding safaris in sub-Saharan Africa; speaking Dutch, DJing, and selling banana beer at festivals in Europe; horse riding in random places in Zimbabwe, including a solo Tonga Trail ride across one of the country’s most treacherous and barren regions, avoiding lions and surviving on avocados and biltong (dried meat) for days on end.

“The inspiration behind the Tonga Trail horse riding challenge was based around my work with lion conservation and the realisation of the dramatic decline in our lion population over the last 30 to 40 years. I planned to challenge myself by seeing if that decline was noticeable whilst following the route on horseback. The ride itself didn’t really go along the route as I had planned it, but I was able to determine for myself that the report of a massive decline was sadly a reality. I was glad that we didn’t have many encounters with lions because the two encounters (one in Hwange National Park and the other in the Mavuradonha wilderness) will live with and define me as long as I live. The trail was a confirmation that there is nothing better than personal action, and it challenged me to be more definitive with my goals.” 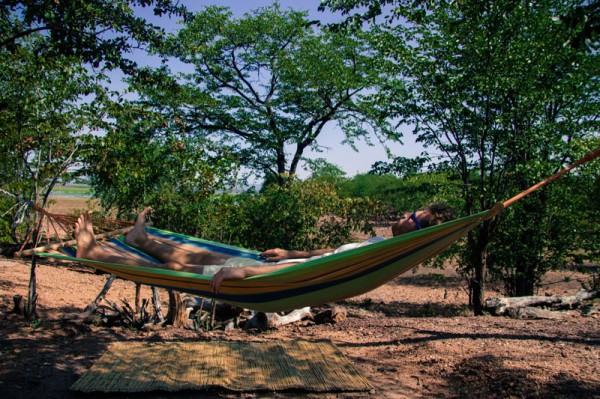 The perfect place for any hammock 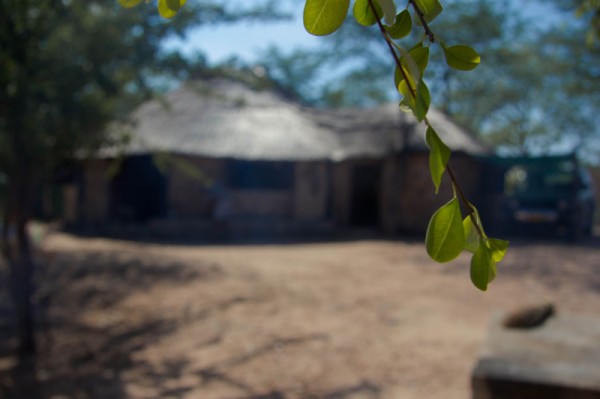 A view of Marv’s ‘villodge’

After meeting us on the road, wrinkled spliff between his morning grin, Marv took us to his new home. For the last couple of years he’s been building his ‘villodge’ from scratch. Forging the roads on 33 hectares of land, plotting where to put his fish farm, where he’ll build accommodation for volunteers and eco-travellers, and conspiring to host an epic party in the bush on the banks of one of the largest manmade lakes in the world.

Marv is immersed in the daily hardships of the Tongan locals: “It’s not glamorous at all, but people live with pride…unfortunately that pride is eroding due to a lack of definition.” Marv’s thatched hut has three rooms including a kitchen, bathroom, and main living area. To get by he’s been delivering truckloads of freshwater fish to the nearest large towns and cities hundreds of kilometres away. “I live in a hut and eat fish three times a week. I’ve started my own vegetable garden that hopefully won’t be trashed by hippos. There’s enough to survive on if you are able to trade, but I must say that without the support of my love, and my family in Zimbabwe and Norway, I would not be where I am today. There are birds, bees, and bats. Spiders, scorpions, and snakes. The greatest view. Hippos, crocodiles, and elephants. You have to be alert and alive to survive and appreciate the future potential.”

Armed with vegetables, live animals, guitars, and a rifle, he explained that he is “militant in many ways, and my rifle is the best business card and shows my commitment to personal security. People understand guns and what they do. As a sound junky the boom is a great bonus too. The guitar shows the contrast of my inner conflict and means that I have something to do when I’m rolling solo. The idea of busking and playing covers of anything from Tracy Chapman, Bob Marley, the Killers, and the Doors around the campfire has been something I have always enjoyed. So my guitar playing is more just for personal entertainment and allows me to feel like Sixto Rodriguez in Searching for Sugarman. Do it out of passion and not for the pay. My ancestors would be proud that I still carry the chordophone with me. It is, after all, a bow of sorts. If you look up my surname in a real Shona dictionary it means two things, a thick porridge and a monochord. When you’re secure everything sounds better, even your set. 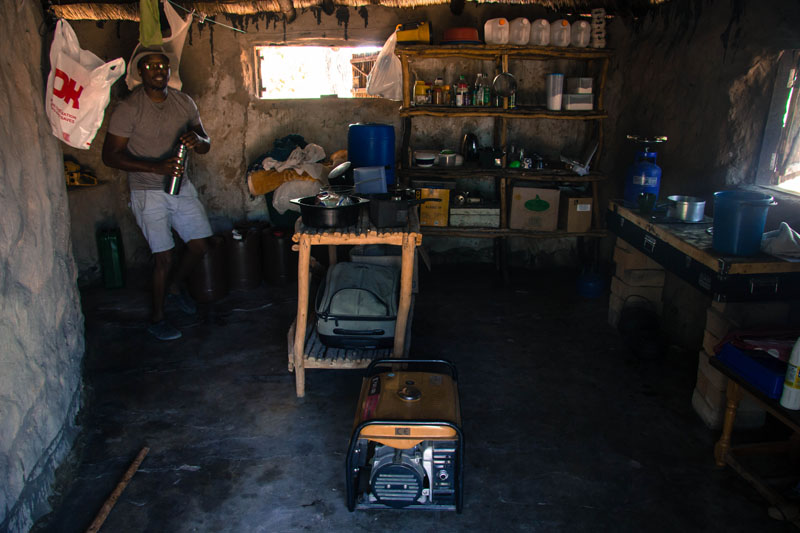 Marv in his humble kitchen, a generator in the foreground for emergencies

“On my first visit to Amsterdam I had the pleasure of meeting and hanging out with the boys from Rush Hour Records. That was my first introduction to modern-day DJing and the use of vinyl in this amazing art form. My dad and mom had tons of vinyl when I was a kid, and I can remember that we would often stop daily house chores whilst my mom organised a dance-off involving brothers, sisters, cousins, maids, and gardeners. So music was definitely the thing growing up, and vinyl was not a foreign object. The idea of dancing was just a form of expression to the grooves, beats, and rhythms.

“For me, DJing involves the use of sounds to try and communicate to a part of humanity that we have come to forget. I always try to imagine a time when my ancestors were using their latest technologies to communicate their appreciation of being on the planet. That is what my DJ set is about; I try to confront people with an atmosphere that is not always comfortable but that can be received by the ears and the body. During this process I try to play and mix music, sounds, anything I can get my hands on that you’ve probably never heard or that is classic and not commercial. The feeling is tribal. The only thing plastic in the DJing world is those using controllers and computers to try to simulate what can only be done by using turntables and a mixer.”

Marv plans to build more huts and accommodation to fulfill the ‘villodge’ dream where tourism is not the point but, rather, a sense of and space for human connection, community, and development. As he sat in the shade of the overhanging thatch I felt immense pride in the fact that he’d already come this far, and it was invigorating to witness the beginnings of something from the heart, borne out of passion and hard work. 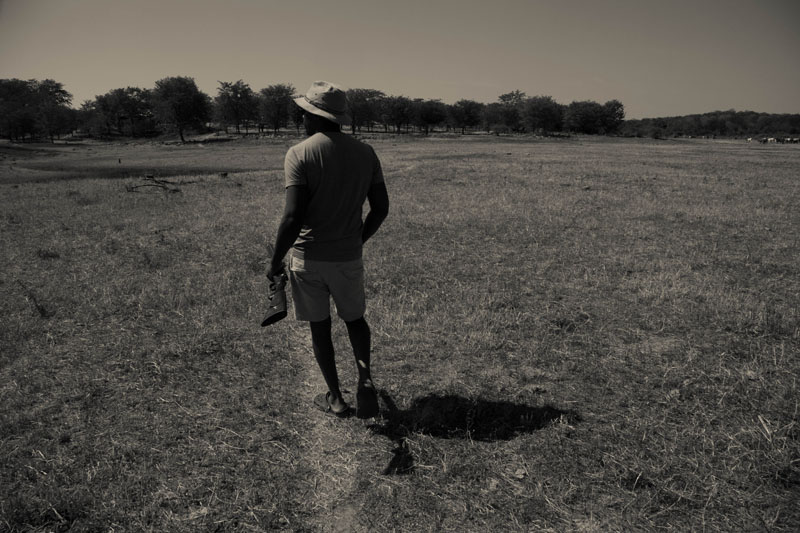 “It’s fucking HOT and there’s a cool villodge in the making. The Tobwe River Villodge is the finest example of what can be achieved if you love what you do. The idea of being African and building a uniquely Zimbabwean village lifestyle that represents thought and vision incorporating modern innovations is exciting. With all the available ideas that are progressive and that fit with the land, people and culture are the lifeblood of the project. The realisation of the abundance of resources is the starting point on the road to success. Then it’s important to find the right people and investment partners, and that process takes time. It is, therefore, important to begin somewhere — that is where I am now, in entry phase.

“The objective is clear and so are the challenges that are unique to Zimbabwe’s investment climate, economic, and political challenges. I operate by believing in the resources and the wealth that is tangible — all I need to do is be exemplary in progress and set up a showroom of equipment, innovation, and ideas. I intend to build a positive culture that preserves the identity of the people and the place. The positive traditions, which define the Zimbabweans of the future by understanding the ancient appreciation of nature and humanity. Civilisation is in need of definition; having a mobile phone does not make you civilised, being able to feed yourself is. Having a belly full enough so that you can hang up your bow and arrow and turn it into a monochord to play a simple tune is innovation. It is this kind of example that is translated from understanding my family name that makes me believe in the beauty of Zimbabwe and the need for minds that are poised for definitive progress.”

Marv, aka Beat Viking, is currently DJing and cross-country skiing in Scandinavia. For DJ bookings or to visit him and work at the Tobwe River Villodge, drop him an email at trvoffice@gmail.com.

Tagged
Interviews Zimbabwe
What did you think of this story?
Meh
Good
Awesome

On How My Tongue Went Dead

13 Signs You Were Born and Raised in Zimbabwe

9 Signs Your Girlfriend Is From Zimbabwe

11 Memories You Have Growing Up in Zimbabwe