ALTHOUGH ENGLISH IS MY first language, I learned Mandarin Chinese and Cantonese Chinese as a child, picked up French in high school, and have recently became conversant in Spanish as I travel through South America. Over the years, I’ve picked up the following tips for expediting language acquisition.

It’s almost impossible to learn a new language, or at least to learn it rapidly, unless you begin thinking in that language. But how do you think in a new language you can’t yet speak?

Ingratiate yourself with the community and you’re halfway there!

The answer is to simply immerse yourself in it. Traveling in a foreign country allows you to continuously hear the sounds, rhythms, and inflections of a new language–spoken on the streets, in buses, on television, etc. Your brain will already start to process and interpret a new language.

Even better than simply traveling is being forced to “operate” in a new language by participating in a volunteer program, or working abroad. Best of all is being completely immersed with locals (such as living with a host family) and completely isolated from other native speakers of your language. 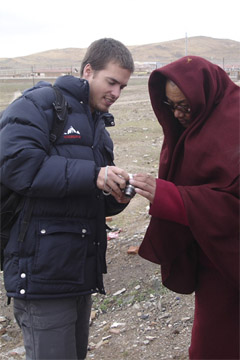 How do babies learn language? Through imitation, repetition of sounds, and above all, by not being shy or self-conscious.

So what if your pronunciation is a little off, or you can’t remember the proper conjugation? Just start talking, even if it seems like babbling. Resisting the urge to translate everything into your native language can be the single fastest shortcut to fluency.

Rather than walking up to the restaurant or giving your host family a pre-memorized phrase for what you’re going to order, simply listen to how the locals order their food, and then imitate them as best you can. The same goes for greetings, small talk, etc. Watch their facial expressions as they say the words; study how they move their mouths.

Copy these expressions and sounds just like a baby would. Whether you understand what they mean exactly or not, eventually you will begin simply calling upon these sounds / phrases / words in appropriate situations. They’ll appear, as if by magic. This is the gateway to thinking in a new language.

Besides common greetings, the one phrase you should memorize and always have at the ready is the phrase is “How do you say that / what is that called?”

By being an inquisitive traveler, one who is always asking questions, you befriend the local people. You’ll find that over time they’ll open up to you, making it easier to initiate conversations. These daily interactions with the locals are your best teachers: set a daily goal for yourself of having X number of conversations each day–asking people about things you’re interested in, but don’t know the words for. Even if you can’t finish the conversation, you’re on the way.

After having conversations, jot down the things you remembered hearing but didn’t quite understand.

After having conversations, jot down the things you remembered hearing but didn’t quite understand. (This can serve double duty if you’re also taking notes for your travel blog).

Then go back and use your dictionary. Look up the words, piece the conversation back together in your mind. Then, next time you have a conversation, use what you learned.

When studying French and Spanish, I also used “grammar sheets” where I wrote down the various verbs to learn their conjugations. Besides helping me focus, they also became handy reference guides.

5. Use cognates and draw links

Ever noticed how some words appear exactly the same across various languages? These are called “cognates.” Unlocking the usage of cognates instantly gives you several hundred more words to your vocabulary. For example, most words ending in “ion” in the Latin languages are the same in English.

Similarly, words across different languages often share the same root word, so drawing on what you already know will make it easier (e.g.: cheese is fromage in French and fromaggio in Italian). Studies have also shown that when you have mastered a second language, your brain becomes becomes better wired to learn subsequent new languages. Fret not, it gets better! 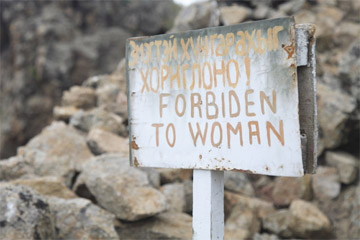 I often stumble when trying to read Chinese script because I don’t use it enough and there are no phonetic cues in Chinese characters. But by watching Chinese music videos and following the lyrics, I learned many new characters and also began pronouncing words more accurately.

In the same way, I attuned myself to rapid French prattling by watching French movies on DVD without subtitles and improved my Spanish by paying attention during the dubbed action movies on long bus rides in South America.

Salsa classes have also ensured I know my izquierda (left) from my derecha (right)!

Beyond words, observe locals when they talk. Be it the Gaelic shrug or a slight tilt of the head, combining body language with a new tongue helps you communicate better.

This is especially important in cultures where language is closely linked to gestures. For instance, appropriate bowing and greeting in Japanese are inseparable, as with the hand gestures and intonation in Thailand. Picking up on non-verbal cues added a new dimension to my interactions with Thais, as I learned the appropriate bowing of the head and a deep enough wai (palms together) to accompany my greetings.

Emotive experiences often etch impressions onto our memory. Make full use of embarrassing / funny / angry experiences by linking them to the new language.

I learned, quite unfortunately, the importance of the special “ñ” character in Spanish because saying “Tengo 24 anos” instead of “años” meant I told everyone I had 24 anuses rather than being 24 years old.

Needless to say, the embarrassment helped correct my pronunciation for good! Similarly, negotiating with shady cab drivers or nasty vendors also helps you learn numbers rather quickly so you don’t get ripped off.

9. A world of friends / then going solo.

While individual classes can be highly beneficial for unsurpassed attention, group classes with friends can greatly aid learning. Having a friend to practice with helps you get better, and you can also learn from the different mistakes different people make.

On the other hand, venturing out solo in a foreign country forces you to speak with local people–say the person riding next to you on the bus, or standing in line at the market. It also prevents you relying on a friend with stronger language skills to do the talking for you in key exchanges such as asking for directions or buying food.

10. Practice at every opportunity before and after you travel.

Ever felt really “rusty” and lacking confidence in a language despite having taken classes or used it (or even mastered it) at some other time in your life? Languages are alive and require exercise. Find avenues to practice wherever and whenever you can.

For instance, I don’t get to use French very often in my daily life, so I found a French penpal to exchange emails. I also keep in touch with people I met in France and French travelers I met in the course of my travels. Writing in French on FaceBook (www.facebook.com) walls does wonders and even helps you learn some local slang!