Africa is the second most populous continent on Earth, and it was home to many of humanity’s most important historical cultures over thousands of years. From Togo to South Africa, the continent houses some of the world’s most incredible ruins, including cliff-side dwellings, mega-amphitheaters, and monolithic towers that have stood for thousands of years. Take your visit to Africa deeper with a deep dive into human history by visiting the grounds of former kingdoms and religious sites throughout the continent. Here are the ruins you need to see. 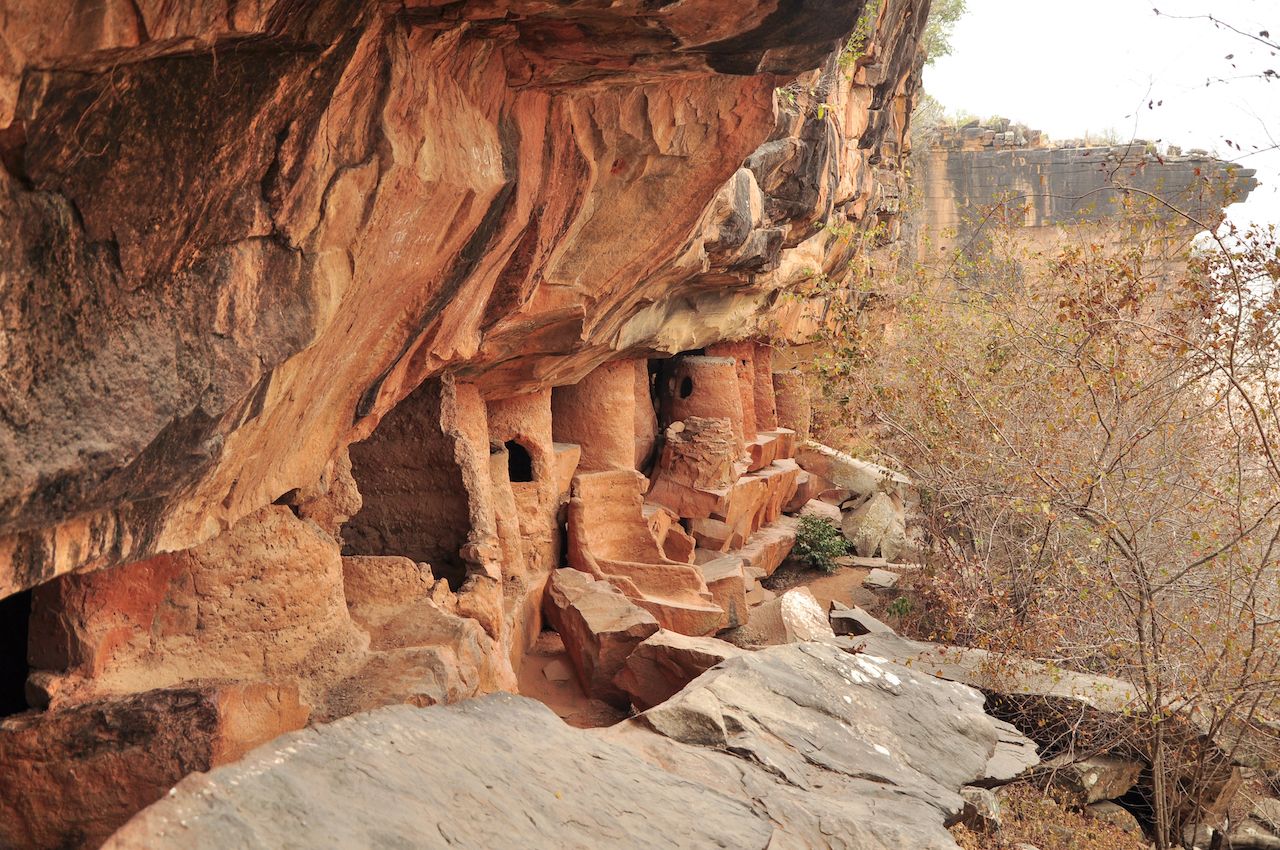 The Nok Caves, tucked within the cliff sides of Northern Togo, were used as dwellings by the local Moba tribes during the 18th and 19th centuries. A neighboring ethnic group, the Tchokossi, often attacked the Moba, kidnapping their people to hand over to European slave traders in exchange for guns and horses. The caves provided shelter and helped the Moba evade capture by the slave trade. Translated from the Moba language, “Nok” means “hidden,” which is the perfect description of this site. When standing at the entrance, which consists of a metal ladder going down the cliff’s edge, you can’t see what’s below.

Nok Cave itself houses 134 ancient granary vessels, as well as a few of the bows, arrows, and quivers of its past inhabitants. There were many more of these artifacts when the structure was discovered, but most have been looted and are no longer present. You can travel by road from Tandjouare to the plateau that houses the entrance of the site. Upon arrival, you may have to pay an entrance fee or bribe to the guard on duty. You can also climb up the rock face to the site, as the trail is marked by a water tower near the village of Djabire at the base of the mountain. 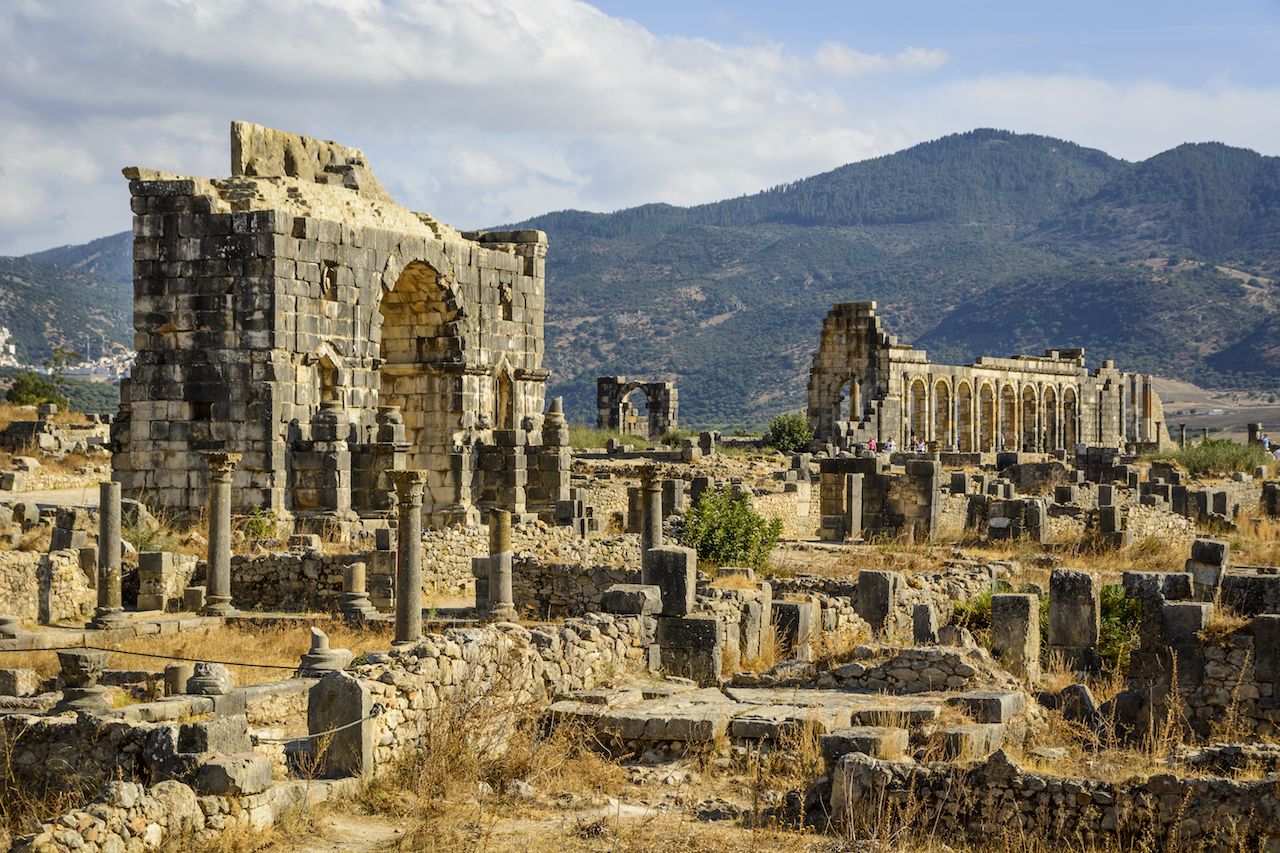 Listed as a UNESCO World Heritage site in 1997, Volubilis is an exceptionally well-preserved example of a town with many different cultural influences — spanning from High Antiquity to Islamic times. African and Christian influences are also visible in the construction and architectural ornamentation that make up the ancient town. Only about half of Volubilis has been excavated, including a number of prominent public buildings and many private ones. The site includes the mansions of the city’s elite, which contain a number of gorgeous, well-preserved mosaics. These ruins can be easily reached as a day trip from either Meknes or Fez. No buses stop at the site, so you will need to rent a car or hire a taxi to take you there — and pay them to wait. The entrance fee is around $3. 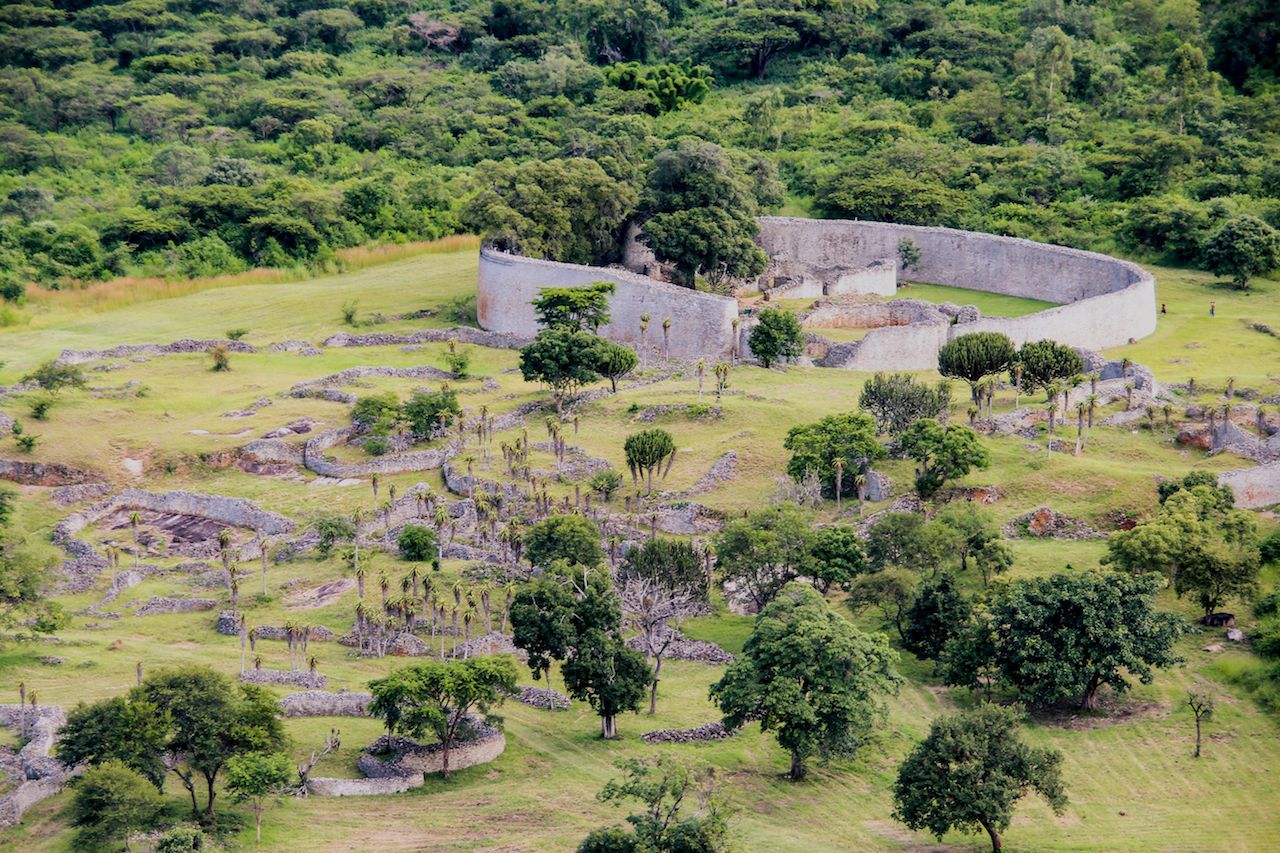 During the late Iron Age of Zimbabwe, Great Zimbabwe was the bustling capital of the kingdom. This ancient site once housed as many as 18,000 people and spanned over 1,700 acres, now the largest ruins in sub-Saharan Africa. Construction of the medieval city began in the 11th century and continued until the 15th century. The ruins are home to three distinct architectural groupings: the Hill Complex, the Valley Complex, and the Great Enclosure. All are built with an extremely impressive dry-stone technique that doesn’t use any mortar to keep the stones in place. Located about 17 miles from the town of Masvingo in the country’s southeastern hills, Great Zimbabwe is a 20-minute drive, accessible by bus or private taxi, and has an entrance fee ranging from $15 to $25 for non-residents. 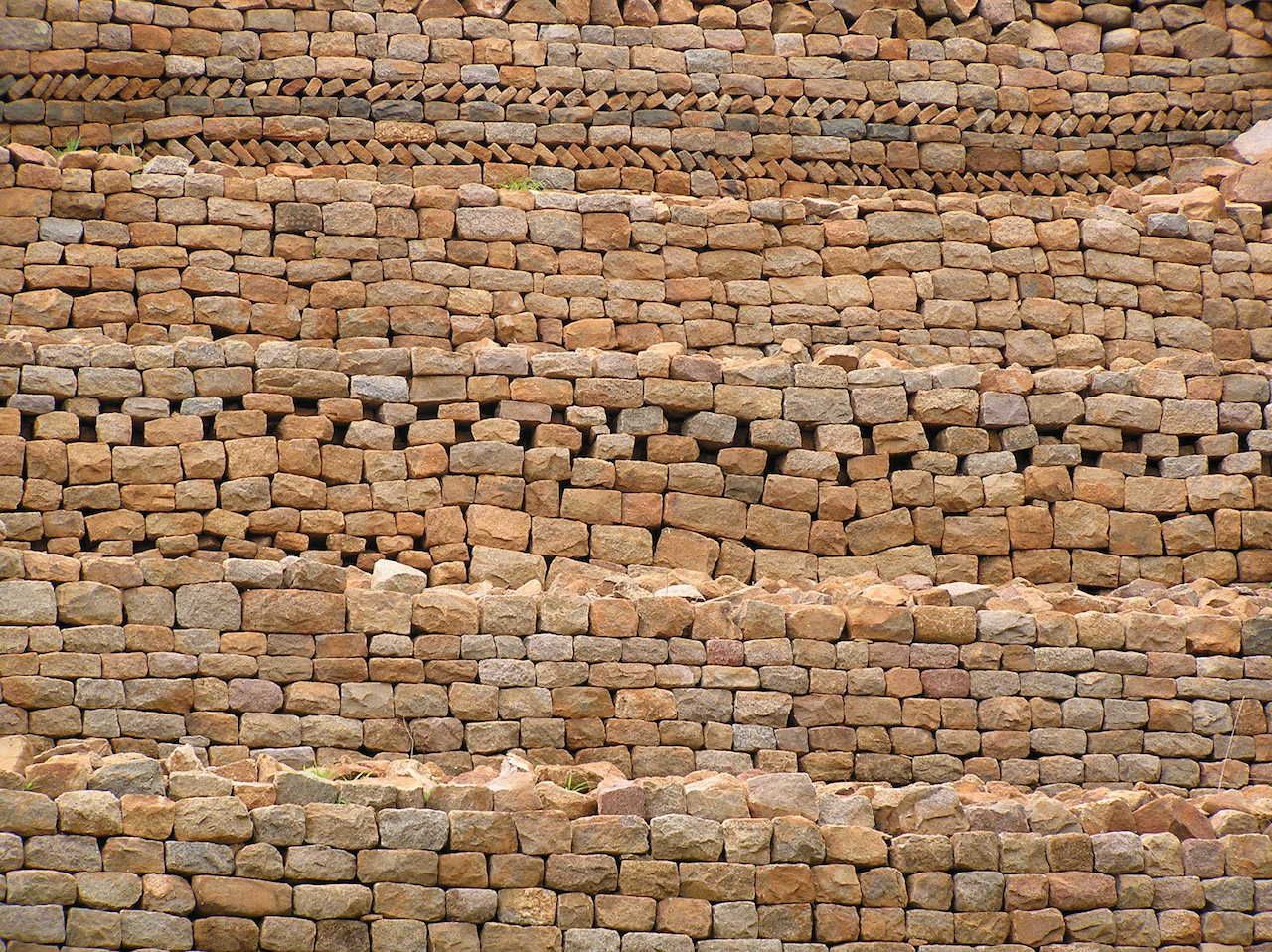 Arising from the collapse of Great Zimbabwe came the construction of the new capital of the kingdom, known as Khami. Created between 1450 and 1650, Khami was built in a fashion that was similar to the unique stone fabrication of Great Zimbabwe, yet it has its own style, with chevron and checkered patterns incorporated into the construction of walls and passageways. This national monument is home to the longest decorated wall in the sub-Saharan region and became a UNESCO World Heritage site in 1986.

The Khami Ruins are located 22 miles west of Bulawayo. You can hire a private taxi to get you there from the city. Expect to pay a $10 entrance fee to get into the ruins, but know that they include spectacular views and a peaceful atmosphere along the Khami River, which often entice visitors to pack a picnic lunch to enjoy along with the scenery. 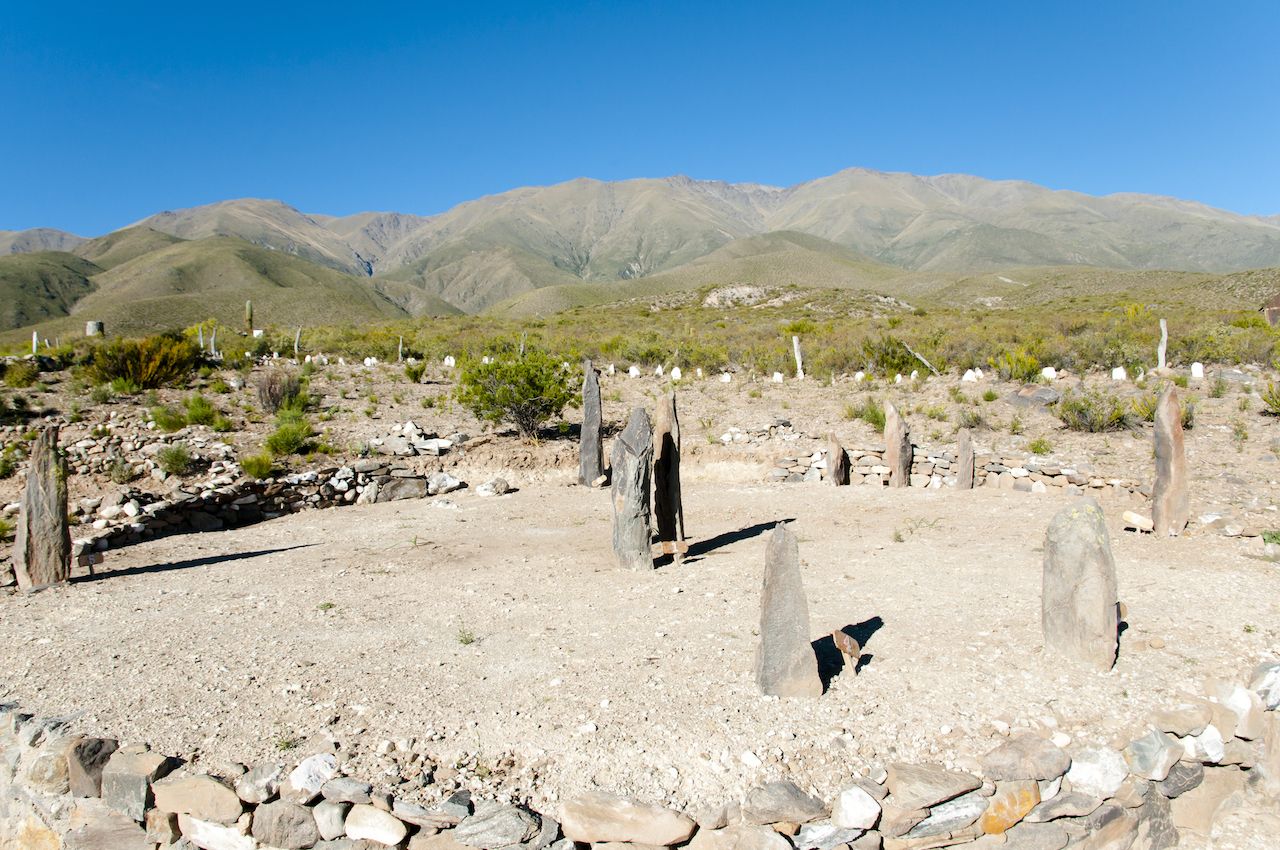 Discovered by accident in 2003 by a South African pilot, Adam’s Calendar is often referred to as “African Stonehenge” — though it predates both Stonehenge and the Great Pyramid of Giza by tens of thousands of years. More than 75,000 years old, this series of stones could be the oldest man-made structure on Earth, and it is the only example of a completely functional, mostly intact megalithic stone calendar in the world. Dubbed “Inzalo Y’langa,” or “Birthplace of the Sun,” by African Shamans, some believe that this is where humanity was created by the gods. Sacred ceremonies were held at this site up until the 1950s. Access to the area can be granted through a guided tour. 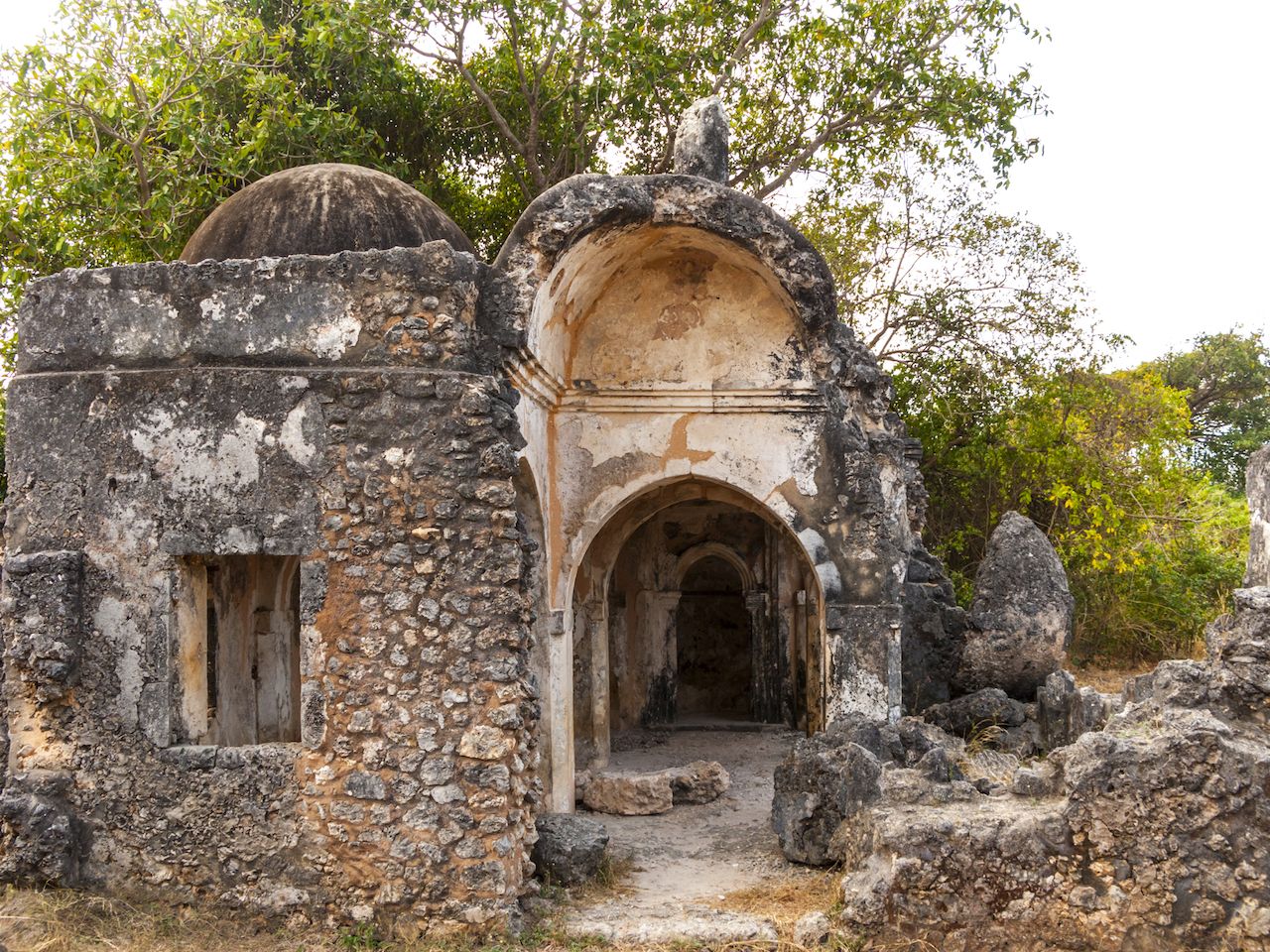 Kilwa Kisiwani (Isle of Fish) is an island off the coast of Tanzania in the Indian Ocean, and it was once the center of one of the greatest empires in East Africa. Reaching its pinnacle between the 13th and 15th centuries, the empire ruled by the Kilwa Sultanate stretched all the way from Kenya to Mozambique, covering the entire Swahili coast. Among the ancient structures on the island are the impressive ruins of The Great Mosque, the oldest standing mosque on the East African coast, as well as the Palace of Husuni Kubwa. The palace, which overlooks the island from its home high above, was once the largest building in sub-Saharan Africa. To visit the island, you need to get a permit from the local government building in the town of Kilwa Masoko, and you need to hire a guide. The 20-minute — or longer, depending on wind conditions — boat ride departing from Kilwa Masoko, guide fees, and entry fees will set you back around $40 total. 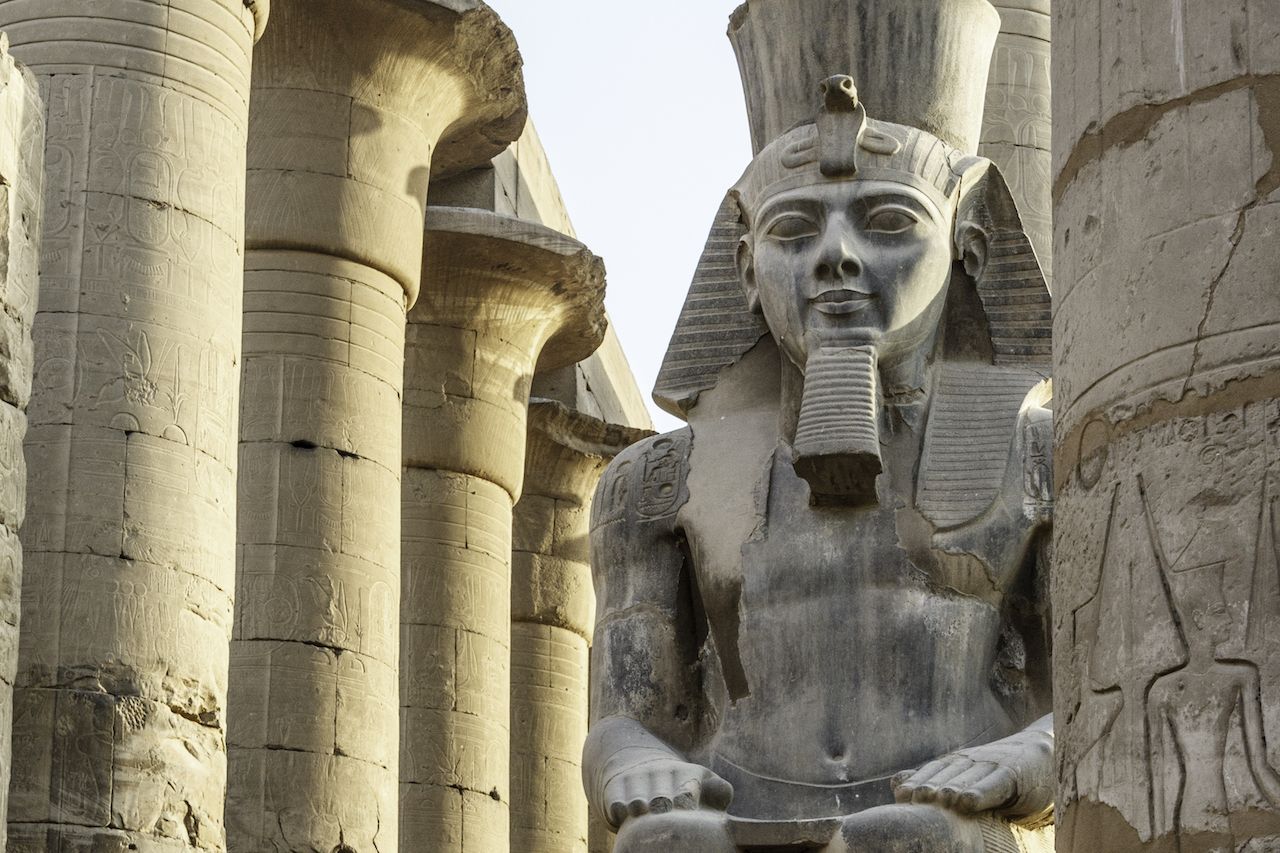 On the east bank of the Nile River in the city of Luxor lies the oldest open-air museum in the world, the Luxor Temple. Constructed in approximately 1400 BC, the Temple of Luxor was built to worship Amun Ra, considered by ancient Egyptians to be the God of the Kings and the King of the Gods. The temple was built by Amenhotep III (1390-52 BC), completed by Tutankhamun (1336-27 BC) and Horemheb (1323-1295 BC), then added on to by Rameses II (1279-13 BC). During the Roman era, the temple and its surroundings acted as a fortress and housed the government in that area. Admission to both the ruins and the nearby Luxor Museum will cost around $15. Evenings are much cooler, so you may choose to explore the ruins once the sun has set as the Egyptian sun can be unrelenting, and the site is well lit for convenient exploration at night. 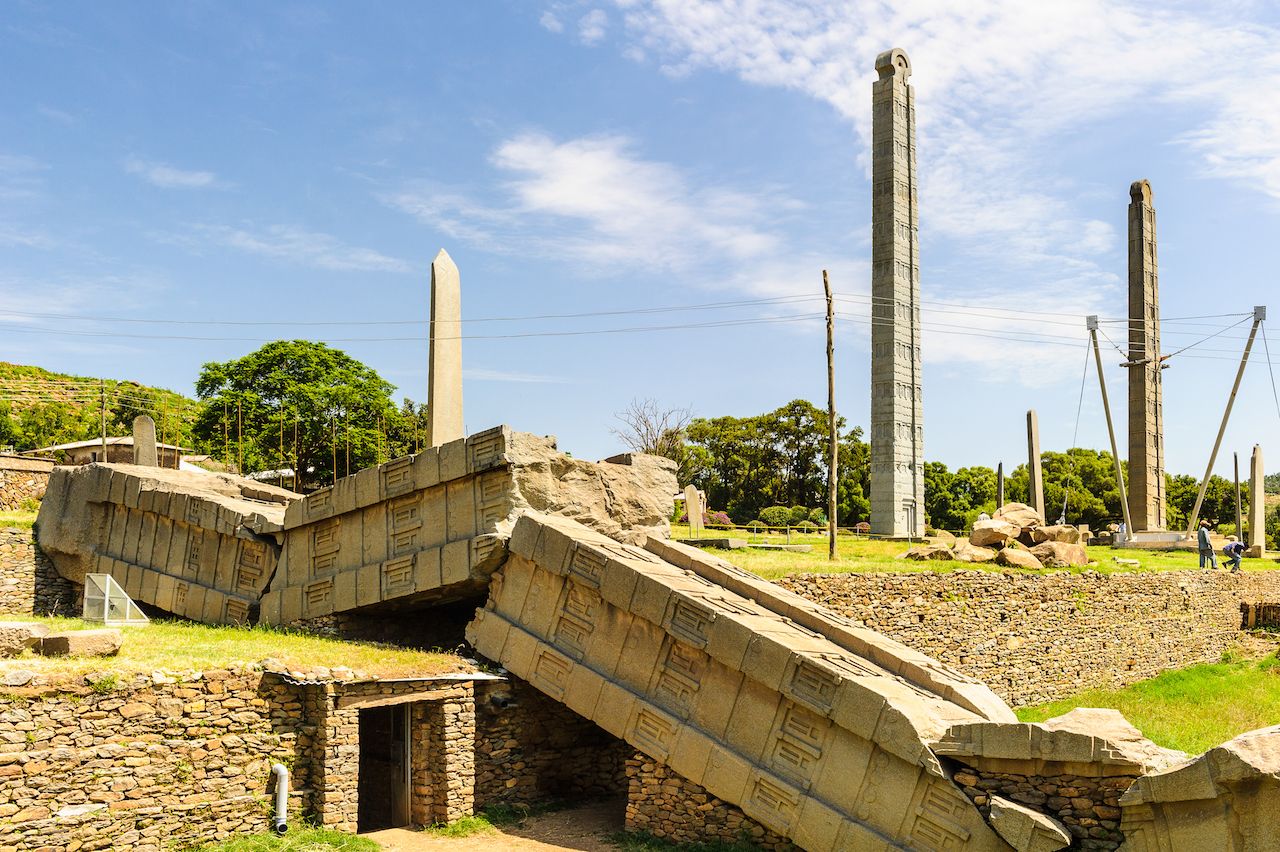 The ruins of the age-old city of Aksum are located near Ethiopia’s northern border and include monolithic obelisks, giant stelae, royal tombs, and the remains of ancient castles dating from between the 1st and 13th centuries AD. The largest of the still-standing obelisks towers by the entrance of the main stelae area at a height of over 75 feet. The overall largest obelisk, at 108 feet, lies where it fell and is possibly the largest monolithic stele that human beings ever attempted to erect at that time. The kingdom of Aksum was built at the crossroads of three continents and was once the most powerful state between the Eastern Roman Empire and Persia. You can drive to the main site where a $3 per person entrance fee will get you into all the various ruin site locations. For another $12, you can hire an English-speaking guide to help you find the specific ruins and explain their significance. 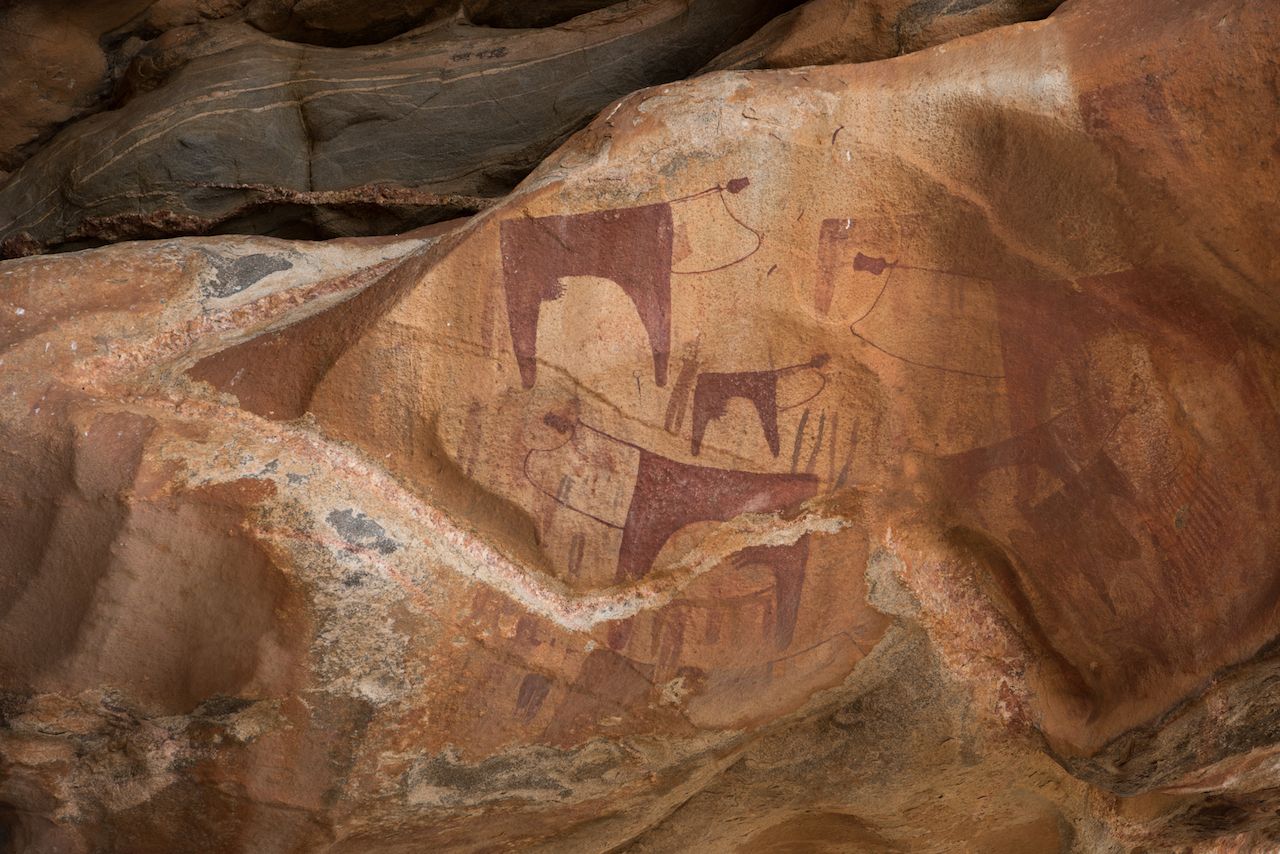 These formations consist of 10 rock alcoves sitting on the rural outskirts of Hargeisa, and they house some of the earliest known cave paintings in the entire Horn of Africa. Dated somewhere between 9,000 and 3,000 BC, they were apparently known to the area’s inhabitants for centuries, although the existence of this rock art only received international attention after it was discovered by French researchers in late 2002. Depicted among the different caves are cattle in ceremonial robes accompanied by humans, a domesticated dog, a giraffe, and various types of wild dogs. The drive from Hargeisa takes about an hour and a half, and you must obtain a permit for $25. There’s also an added catch: You’ll need to hire a taxi along with a private military armed escort for protection. 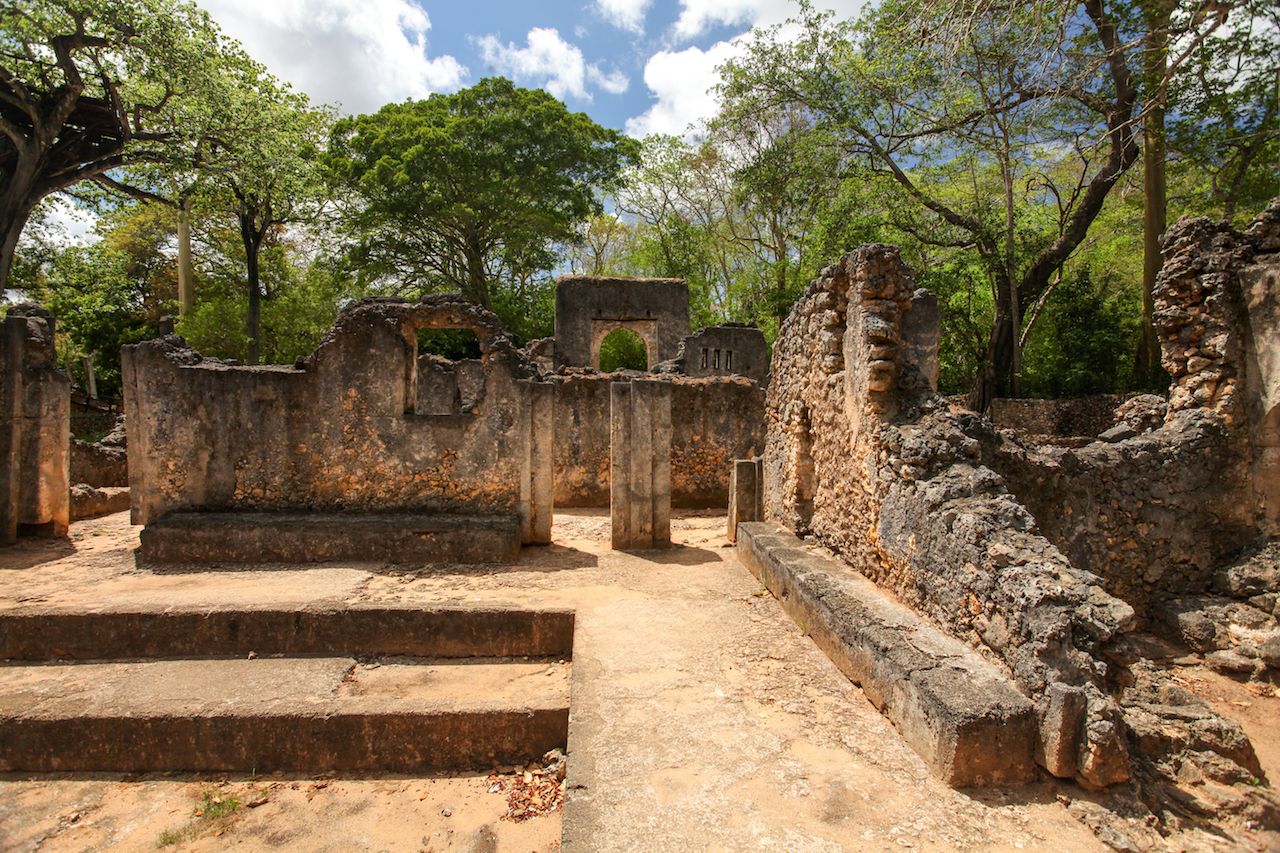 The Gedi Ruins, one of many medieval Swahili-Arab coastal settlements that stretched from Somalia to Mozambique, are located within the lush, tropical Arabuko-Sokoke Forest. Currently the Giriama, one of the Mijikenda tribes, maintains a large community around the Gedi ruins and considers the site a sacred, spiritual place. According to local tradition, the ruins are protected by the spirits of its priests, and these “old ones” are said to curse anyone who brings harm to the site.

The ruins, which span 45 acres near the Indian Ocean coast of eastern Kenya, are surrounded by two walls: an outer wall enclosing all 45 acres and an inner wall enclosing 18 of those acres. Still standing today within the confines of its inner wall are numerous coral-brick houses, a palace, and an impressive mosque. From the village of Watamu, you can hire a tuk-tuk for around $2 to drive you there; another $5 (for non-residents) will cover the entrance fee. In addition to the friendly monkeys that inhabit the site, you may see some other animals, such as a rare species of owl and various other types of birds. 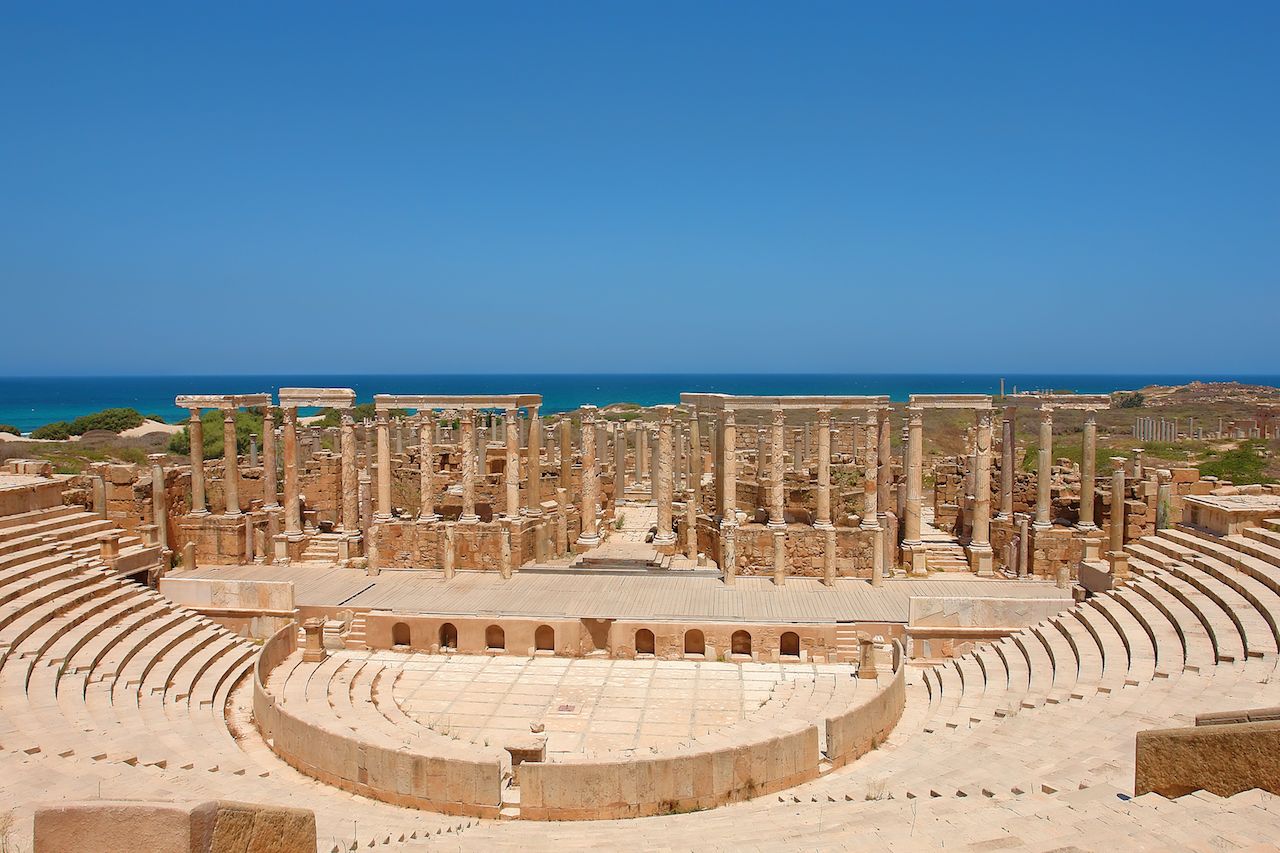 Leptis Magna is considered one of the most well-preserved sites of Roman ruins in the Mediterranean. The site was originally founded in the second half of the 7th century BC and was incorporated into the Roman Empire in 46 BC. Crossing roughly 80 miles from Tripoli, the two-hour ride takes you past seven different checkpoints before finally reaching your destination. Entrance to the ruins is free for locals and about $5 for tourists. Given that Libya is one of the most high-risk destinations in the world due to crime levels, terrorism, civil unrest, and armed conflict, we recommend you check your own government’s travel website for updated advisories and warnings before planning a trip.