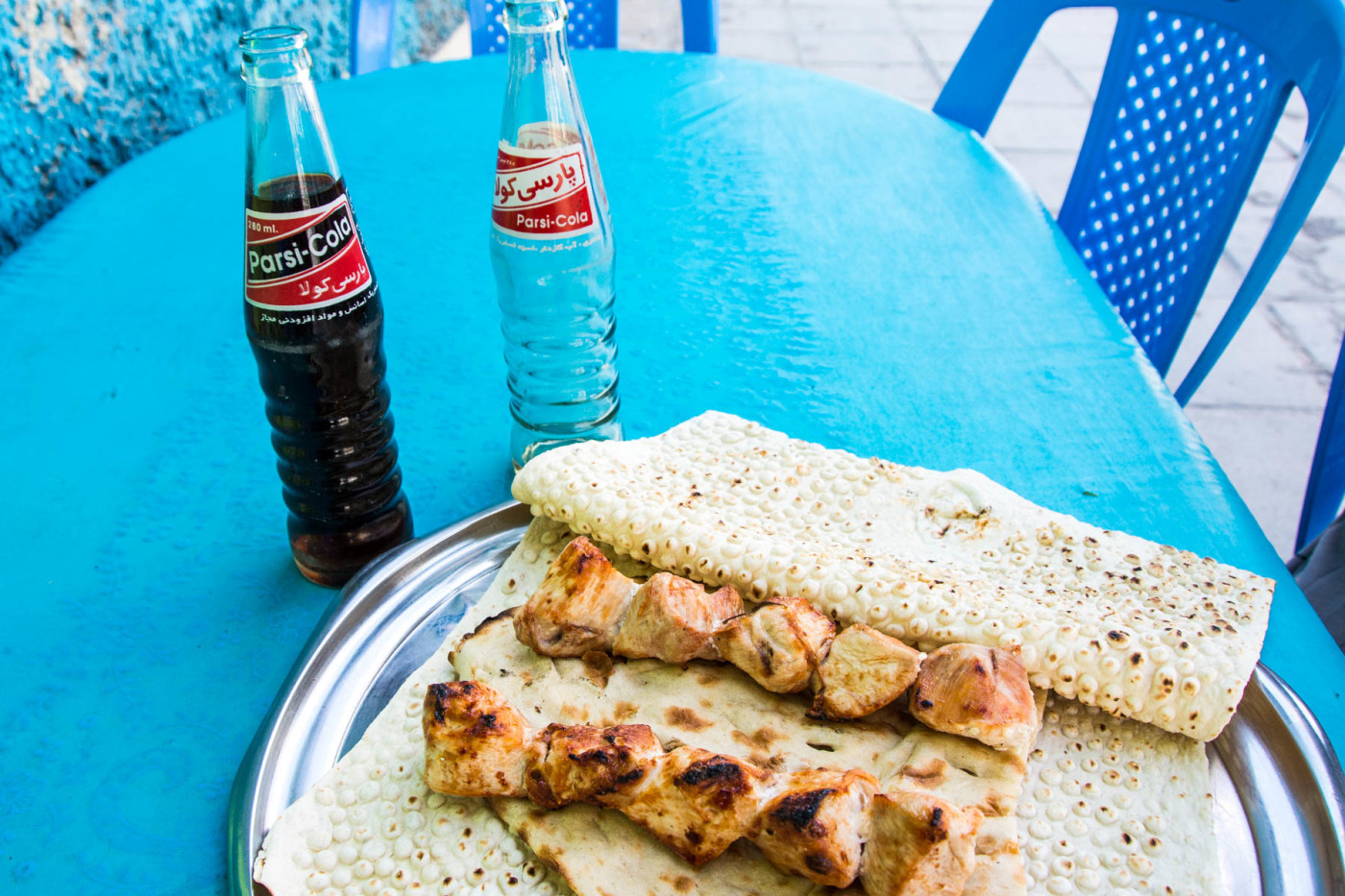 Be prepared to OD on kebabs while in Iran, possibly involuntarily.

30. Tap water is safe to drink, unless stated otherwise. There are also plenty of water fountains all throughout the cities, so bring a reusable water bottle!

31. Forget coffee, it’s all about tea. Tea is the drink of choice, though you’ll occasionally encounter tiny coffee shops, and coffee is more common in touristy areas. Coffee addicts, savor the black stuff when you can!

32. When drinking tea, put a sugar cube in your mouth, then take a sip. This is the Iranian way of drinking tea. Yes, this means you’ll end up consuming a metric sh*t ton of sugar cubes with each cup of tea… also the Iranian way. Spoons for tea are only found in tourist areas.

33. You can often peek in the kitchen to see your options if there isn’t an English menu. Just stare blankly at the Farsi for a bit, shrug, and point to the kitchen. It’ll help you find things other than kebab.

34. Don’t feel pressured to eat kebab when out with Iranians. They’ll often order kebab for you because they assume that’s what you want, and it’s common choice when eating out, since not everyone has the luxury of a charcoal grill in the home.

35. Don’t be surprised if you encounter alcohol. Just because it’s banned doesn’t mean you can’t find it, as prohibition has taught us. You’ll be fine drinking in private homes, but be wary about consumption in public places. 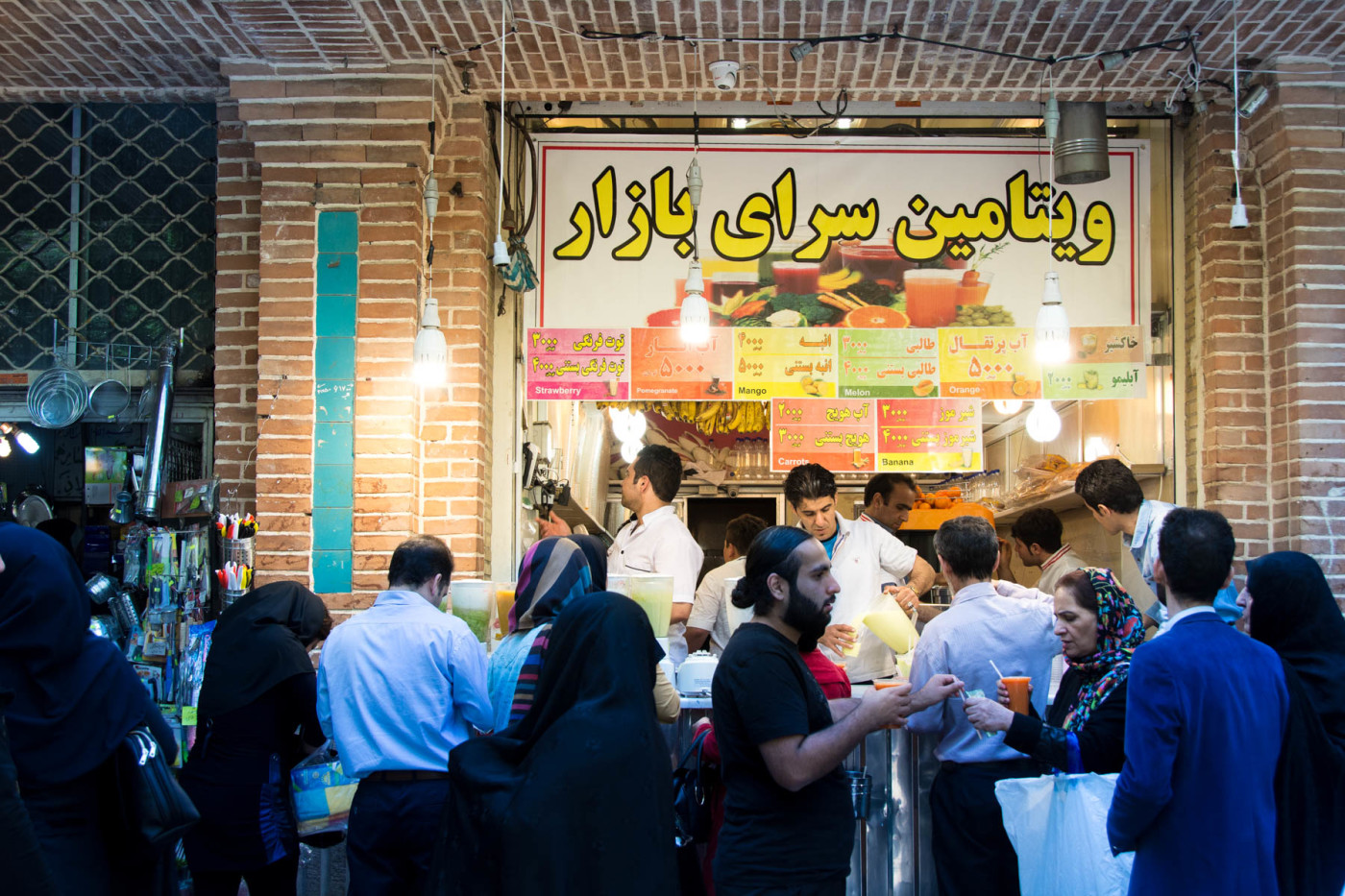 An important aspect of Iranian culture: an addiction to all things blended and delicious!

36. Persian (Farsi) uses the Arabic alphabet, and is written right to left. Numbers will also be different, but confusingly enough, they are written left to right. Try to learn the numbers so you can understand prices and times. You can use bus rides to learn the numbers from road signs along the way.

37. Persians are not Arabs. Iranians are very firm on this, and are offended if you mix the two.

38. Everything closes between 13:00 and 16:30-ish. During this time people go home to lunch with the family, nap, and avoid the heat. Sights, restaurants, and ice cream places (most important!) will still be open, though.

39. Everything also closes on Fridays. Friday is the holy day of the week, and many stores are closed for the whole day. Friday mosques close to non-Muslims as well.

41. No public displays of affection. It’s illegal to kiss or hold hands in public, though people bend the rules for the latter in big cities. If you want to show some love and affection, get a room. Literally.

42. Don’t wear shoes on carpets. Pack shoes that you can easily take on and off!

43. The portraits on billboards and sides of buildings are of martyrs. It’s a “great honor” to die as a martyr for Iran, and the government plays this up by putting their faces on billboards and having martyr murals painted throughout cities. 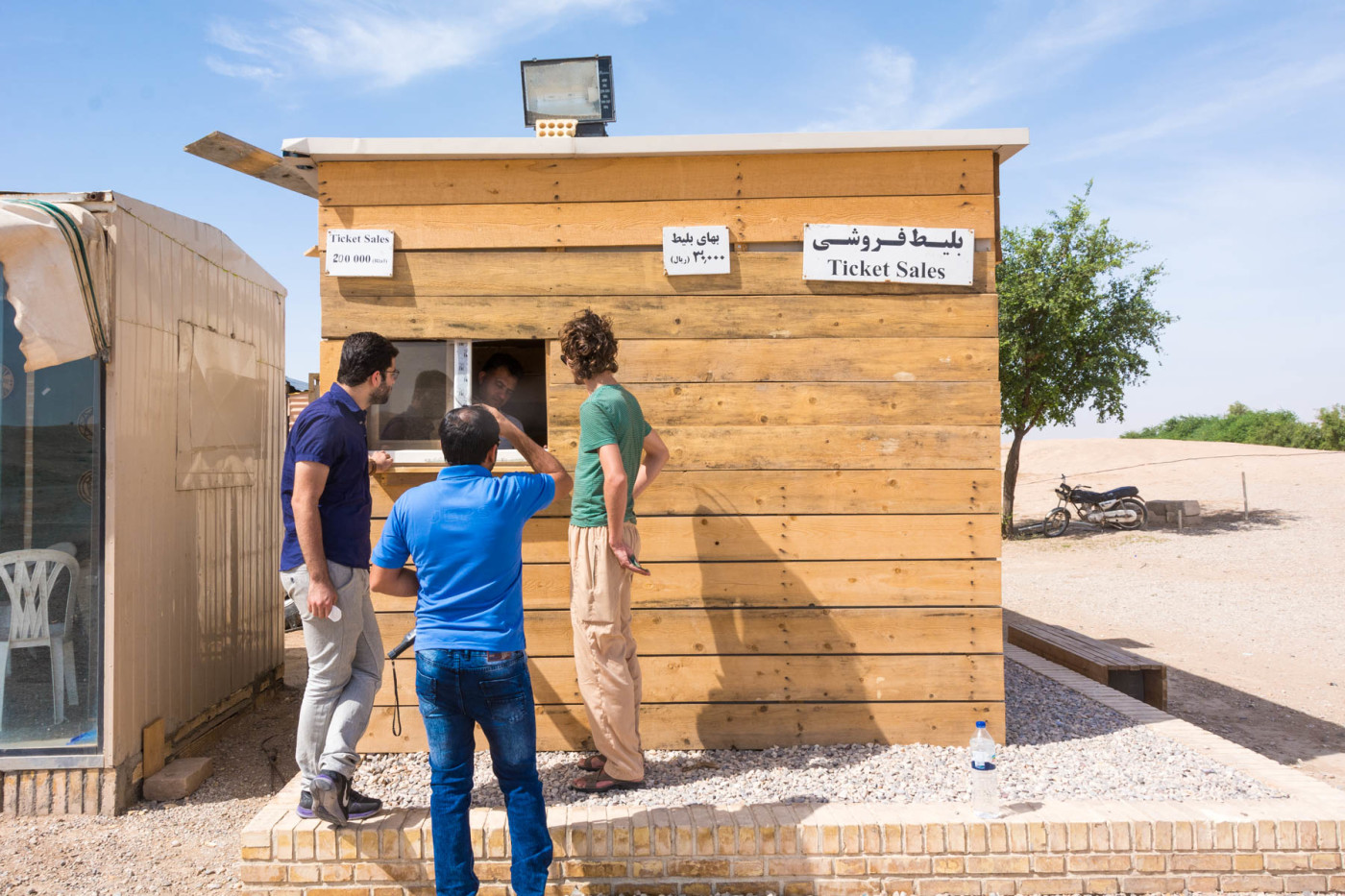 Attempting to haggle down the price of foreigner tickets… unsuccessfully.

44.The Lonely Planet (2012) is definitely outdated. Prices have skyrocketed since it was last published, but it’s at least still useful for transportation information. There should be a new version published in 2017.

45. Foreigner price for sights is usually 6-8 times the local price. And according to locals, foreigner ticket prices are still on the rise. For the budget travelers, the ticket people sometimes bend the rules and give you the Iranian price if you charm them a bit (and it’s not busy). Otherwise, try going in with a local, and have them buy your tickets while you hide.

46. Tour agencies often give out free city maps. Check them out–there’s usually interesting things on the maps that you won’t find in guidebooks.

47. Visit sights at night when possible. Many religious sites are open in the evening, and are much more pleasant: less tourists, more locals, cooler weather, and beautiful lighting. Sounds good, right? 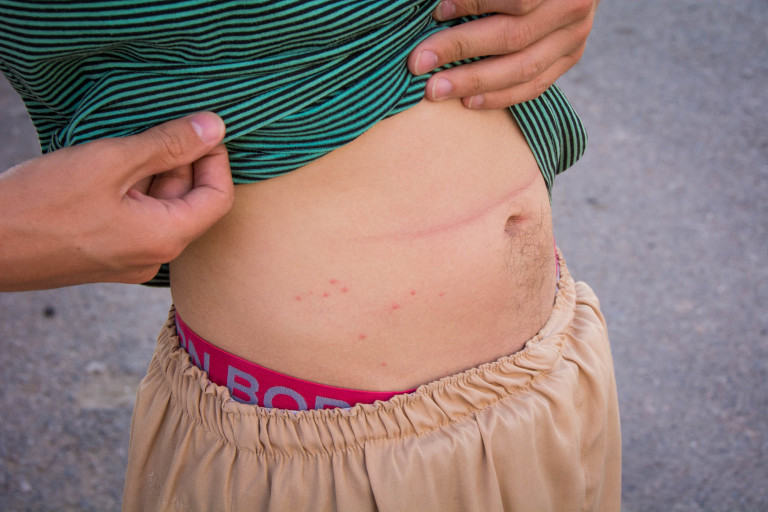 When bedbugs attack: the downsides of cheap guesthouses. Not so healthy after all!

48. Carry toilet paper/tissues everywhere. Cheap accommodations won’t always have toilet paper, and public toilets definitely don’t. Or get used to using a bum gun! Remember, you wipe with your left hand, and shake hands with your right.

49. If looking for a toilet, ask for a “WC”. In English, that is. It’s more commonly used than “toilet”. If you do want to ask for a toilet, try using the French pronunciation, “toilette”.

50. Most toilets are squat toilets. Hotels will sometimes have western toilets, but you’ll be doing a lot of squatting away from home. Start building up those leg muscles! 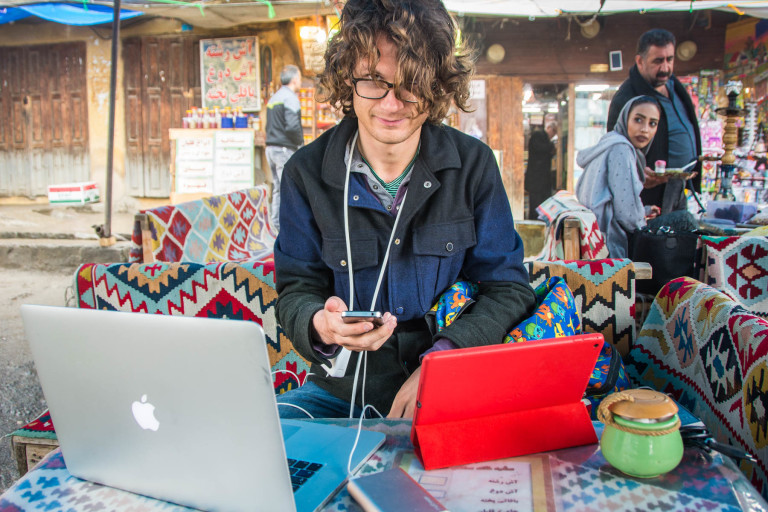 FYI: the internet in Iran will make you want to strangle yourself and/or other innocent things.

51.The internet is censored. Many common social media networks (Facebook, Twitter, Pinterest), Google services (except Gmail), app stores (for paid apps), and western news outlets (BBC, CNN) are blocked, so you’ll need a VPN if you plan on maintaining your internet existence while in Iran.

52. Internet is slow, and can be hard to find. The government throttles internet speeds, and many cheap guesthouses and hotels outside of the main tourist track in the center of the country don’t have wifi.

53. Consider getting an Iranian SIM card if you need regular internet. Mobile connections are often much faster than wifi and SIM cards are cheap. An Irancell SIM card is 200,000 rials (about $6-7), and 1GB of data is 100,000 rials. Less popular carriers are even cheaper–we got TCI SIM cards with one month of calling and 2.5GB of data for 120,000 rials in total (less than $4). Irancell’s coverage is faster and better, though more effective at disconnecting VPNs.

54. Download Telegram. It’s the most popular messenger app in Iran, and you’ll want to use it to stay in touch with the billion and one Iranians that will give you their phone number. 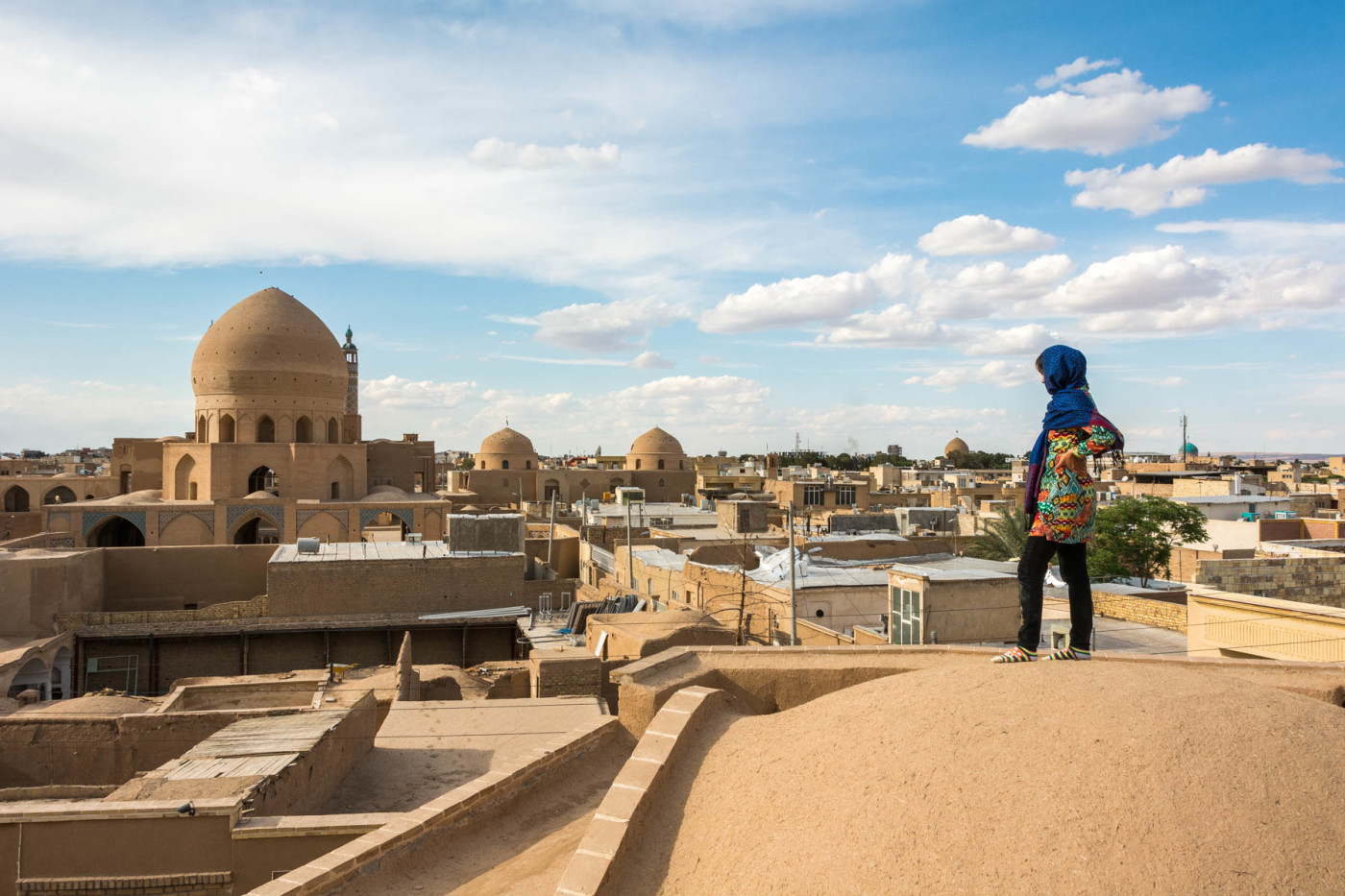 Rocking the demure Iranian ladydress (more formally known as a “manteau”) on the rooftops of Kashan.

56. Women have a strict dress code. Your head has to be covered, your shirt needs to cover your bum, and you can’t wear short sleeves–3/4 length max. Yay freedom! Tight pants are okay, though.

57. Women sit in the back of the bus on city buses. Always enter from the middle of the bus, and if you need to pay the driver, do so at the end of the ride by leaning in through the front door after getting out.

58. Women, wear whatever you want at the beach when in the women-only area. Beaches are separated into separate sections for men and women, and a mixed gender area for families. Alas, you’ll have to cover up if you’re lounging in the mixed area. Don’t forget sunscreen to prevent strange tan lines!

69. It’s often okay to take off your hijab in people’s homes or when hiking. Follow other women’s examples in homes. As for the great outdoors, if there’s no one around, who will get you in trouble? You’ll see many Iranian ladies doing the same.

60. If a man harasses you a woman, make a scene or firmly turn him away. Punishment for crimes against women is severe, and men are too afraid of being caught to let things progress. The tourist police are also very willing to help, providing you have information or photos they can use to track down offenders.

This article was originally published on Lost With Purpose, and is reposted here with permission.

Prev Page
Tagged
Trip Planning Iran
What did you think of this story?
Meh
Good
Awesome