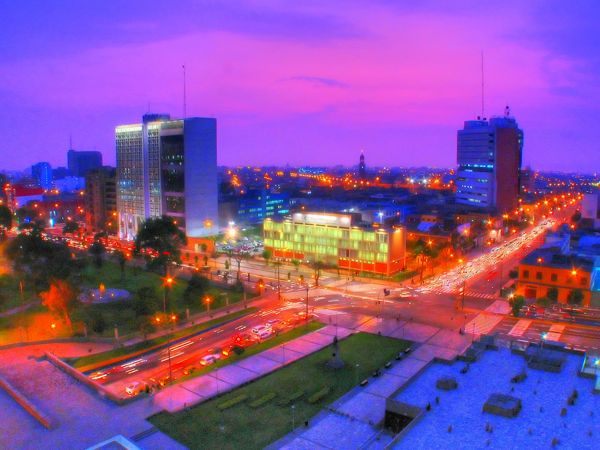 Lights spiral up a tall building, making it sparkle like a jewel in the dark. It is the tower of one of South America’s largest cell phone carriers.

I scan the burnished windows and imagine the CEO sitting comfortably at his desk, not wondering where his next meal will come from.

I despise this person because the amount of money I need to get home is pocket change to him, and the least he could do is share. 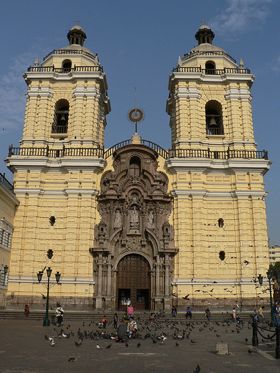 Then I look again at the streets of Lima, and see a blind man holding out a tin can for money.

Next to him a woman carries an infant over her shoulder and two more children circle her legs as she vends small bags of candy. In the 25 minute bus ride, I pass dozens of poor men and women trying to feed families and simply stay alive, and guilt overruns me.

I left an apartment in southern Brazil to traverse the continent of South America and landed in its geographical armpit: Lima, Peru. I have reached a controversial point in my trip, a point I was pretty sure would come but am in no way prepared for.

And what a place to have chosen! I am walking the streets of a city where a quarter of the population lives in poverty, and I am dreaming of handouts. Lima is the fifth largest city in Latin America, yet with empty pockets, it feels tiny and suffocating.

I took a combi bus downtown (26 cents) and stopped at Church of the Nazarene. Not being a religious person, praying for help seems a last resort.

A man with no legs sits on a grate outside the church and shakes a plate of loose change. The grate emits a hideous odor and passersby walk more quickly to avoid it, ignoring the legless man.

The buildings and streets around us are sad: their greens and reds have dulled with a thick coat of vehicle exhaust, and the gutters overflow with plastic bags. 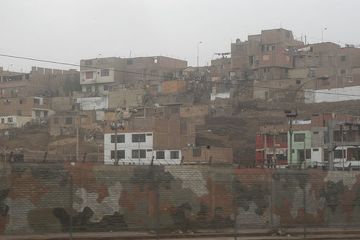 There is not a breath of fresh air in this part of town; I haven’t had one since I arrived.

It is so noisy that I almost don’t hear the moans of a lady sitting by the cross walk. She has snow white hair, starkly contrasting her reddish brown skin, which is wrinkled like a discarded blanket from her years of apparent suffering.

She doesn’t look up or even hold out a hand; she just sits and moans.

Due to increased terrorist bombings and resistance effort violence, along with a severe national economic crisis, civilians fled from the valleys and mountains to the coastal city to look for jobs, food and shelter.

Unfortunately, Lima was not equipped to accept some two million new inhabitants, and this led to the development of poor shanty towns on the perimeter of the city, and a lot of mouths to feed. 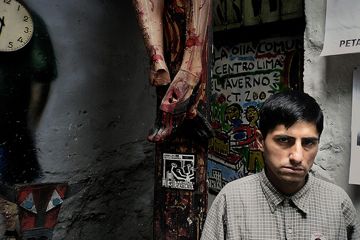 Photo above and feature photo by antifluor

This is all too apparent if you’ve spent five minutes in Lima.

The slums that circumscribe the desert metropolis lack running water and electricity. The shelters are made of wood planks and makeshift adobe, and sanitation is practically non-existent.

The life expectancy of a child born in this area of Lima is ten years less than those living in the developed world.

On top of this, unemployment in Lima is roughly ten percent, and 50 percent of people are said to be underemployed.

And the gringa needs a job.

One guy offered me work as his pastry girl to humbly take his cakes to the streets of Lima. He pays “average,” which amounts to less than $200 USD for a month of full-time work.

My plane ticket will cost $800 and panic starts to set in. I decide to take a breather in a park in the nice area of the city. 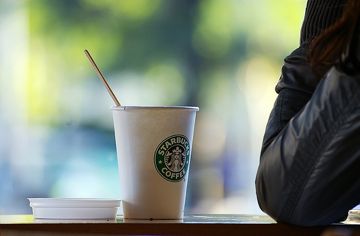 There is a man in a business suit reading the paper beside me, drinking Starbucks. A woman on a Bluetooth drives by in her Mercedes. Groups of well-dressed students sit down at a classy restaurant.

Other people’s wealth is starting to make me crazy.

I suddenly understand the desire to steal, and all of the worries I had protecting my things while I’ve been backpacking immediately come full circle and slap me in the face.

Lima is certainly not without its wealth.

In fact, even with the global economic downturn, the Peruvian economy is on the rise. All across the city, the streets are being torn up and repaved, new buildings are replacing crumbling ones and parks worthy of a New England suburb are plopped down in the most dangerous areas of the urban center.

The government is using the improving economy to bring changes to Lima’s exterior, yet it still doesn’t have a plan for the four million impoverished peasants seeking a better life.

I take another combi to a different part of town. At a traffic stop, a young boy juggles sticks of fire between the green lights. He is no more than ten and has the talent of a circus performer. Quickly, he runs from car to car and knocks on windows, hoping for anything he can get. On this light, he gets nothing. 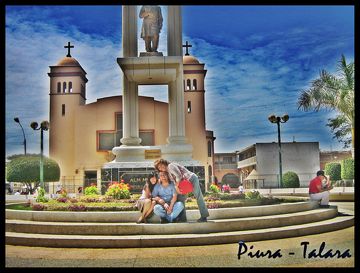 I found a volunteer job that houses and feeds me for a small fee, and the noose loosens slightly.

One day the group of volunteers decides to explore Lima. We visit the historical sites and museums, eat its inexpensive food and browse its markets.

Throughout it all I am consumed with thoughts of money. I find myself scorning flagrant tourists who spend unabashedly. I painfully envy individuals who seem to have disposable income, or who have any income for that matter.

My workmates want to eat at the place recommended by Lonely Planet, and I am the only one who can’t afford it.

Still the couple dollars in my bank account is more than the boy outside the restaurant has. His clothing is tattered and face marked with dirt, and he squats with his head between his legs.

From my apartment in Central Lima, I think about that boy while I watch my bank account dwindle.

I realize what a fortunate hand fate has dealt me in that I am able to find shelter and food in a strange city, while a native Peruvian may be hard pressed to keep a roof over their head.

As I observe a busy street of people earning their daily bread, I have three wishes: I hope to help the kind people of Peru, I hope to learn from these lessons of life, and I hope to do it all with a happy ending.

Have You Heard About The Bloodshed In Peru?

On June 6th, 2009, dozens of people were killed over controversial oil fields in the Peruvian Amazon. We’ve got the story right here on the Matador Network.

For another traveler’s perspective on Lima, check out “Arrival In Lima”, part of the journal pages series at the traveler’s notebook.

What did you think of this article?
Meh
Good
Awesome
Bookmark
Posted In
Narrative
Destinations
Lima, Peru

Conquistadors no more: Spaniards are flocking to Latin America because they need jobs

8 reasons Why Lima is More Than a Layover

This may be the coolest modern home in Lima

Scenes from the real Peru