ON A FORESTED hilltop in Japan, I once observed an old man deep in prayer at a Shinto shrine. Clap, clap, went his hands, followed by a moment of reflection, before a deep, lingering bow.

After he was done, he greeted me and suggested that we descend the hill together; through hundreds of red and black torii gates; past myriad knee-high statues of foxes, each of their collars wrapped in a vivid red neckerchief.

The man was Osamu Fujiwara and, without ever having left Japan, he spoke and taught the most beautiful English at his own language school just outside the entrance to Fushimi Inari Taisha shrine in Kyoto.

“Have you ever heard”, he said pointing to a fox statue peeking through the undergrowth, “a Japanese tell you that a kitsune came to them in their sleep?” No, I had not. “They come, for good or for worse, and they permeate our dreams.”

While I have never been visited by Fujiwara-san’s enchanted foxes, my dreams have nonetheless lately been infused with hints of my time in Japan. I left in May 2014 after living there for a year.

Now I can feel Japan calling me back. Here’s why. 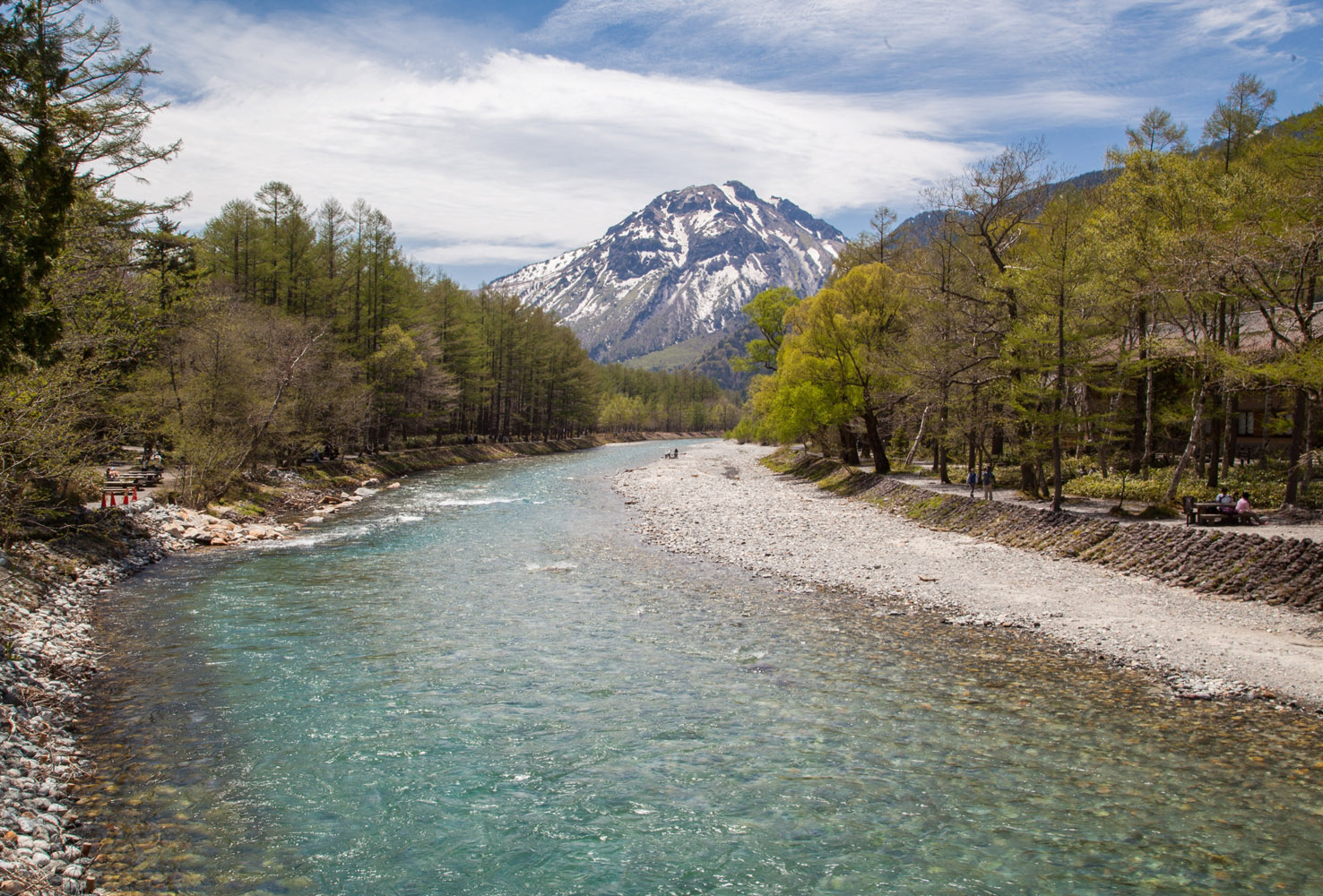 As Fujiwara-san made me a cup of green tea, I pushed him to explain why he’d never traveled outside of Japan. Gesturing to the many landscape photographs on his office walls, he said unconvincingly “Why would I ever want to leave?” This seemed a way to reconcile some fears within himself, rather than something I was supposed to swallow. Four years later though, as I hiked through Kamikochi, his words manifested as my own sentiment, as I allowed myself to entertain the possibility of staying in Japan forever. 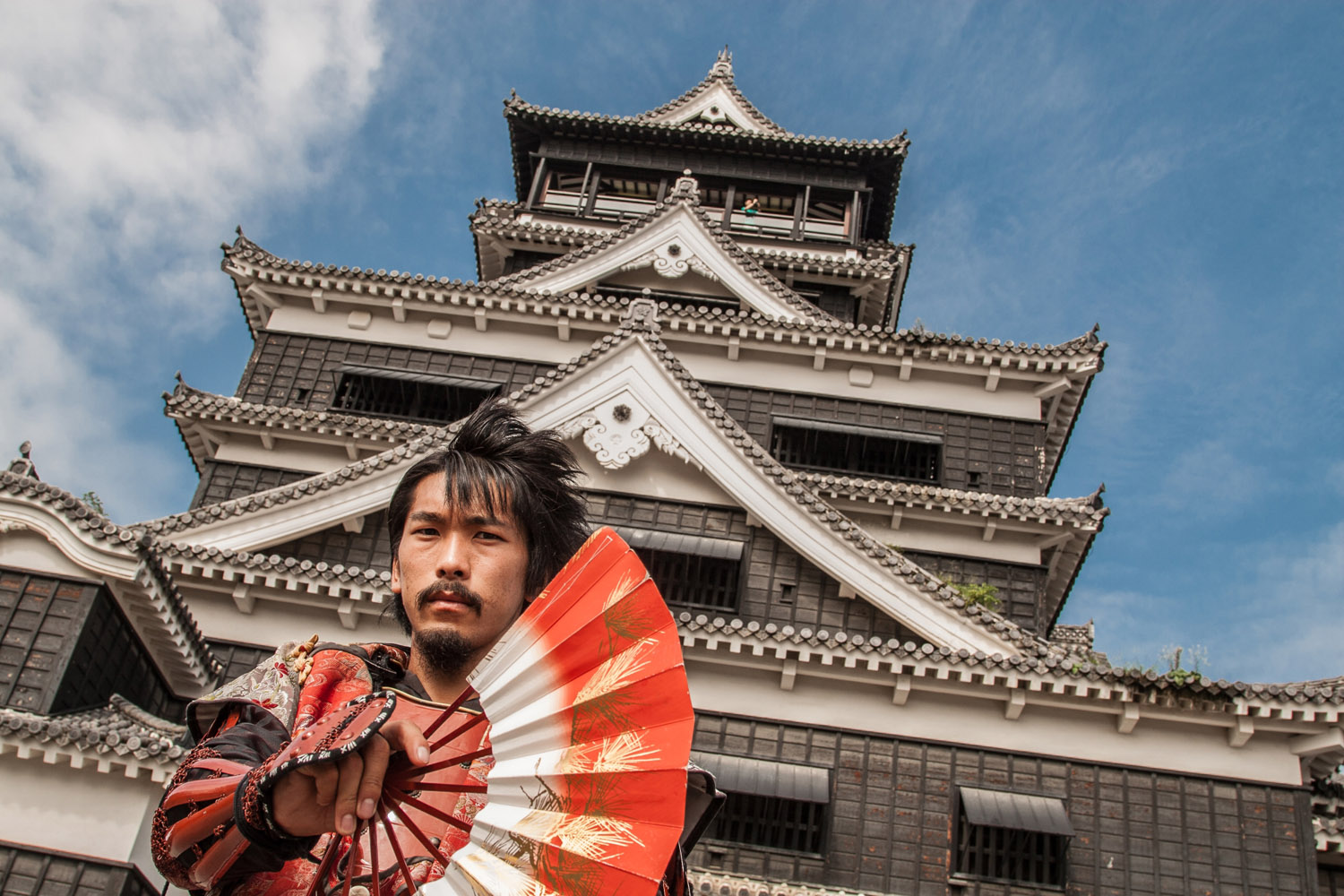 I found that Japanese castles, once ancient training grounds for battle, had become quintessential training grounds for photographers. This samurai made it his mission to ensure that I didn’t leave Kumamoto Castle without at least one great image. He didn’t bat an eyelid when I lay flat on my back on the ground, my right leg between his feet, to seek out a unique angle. 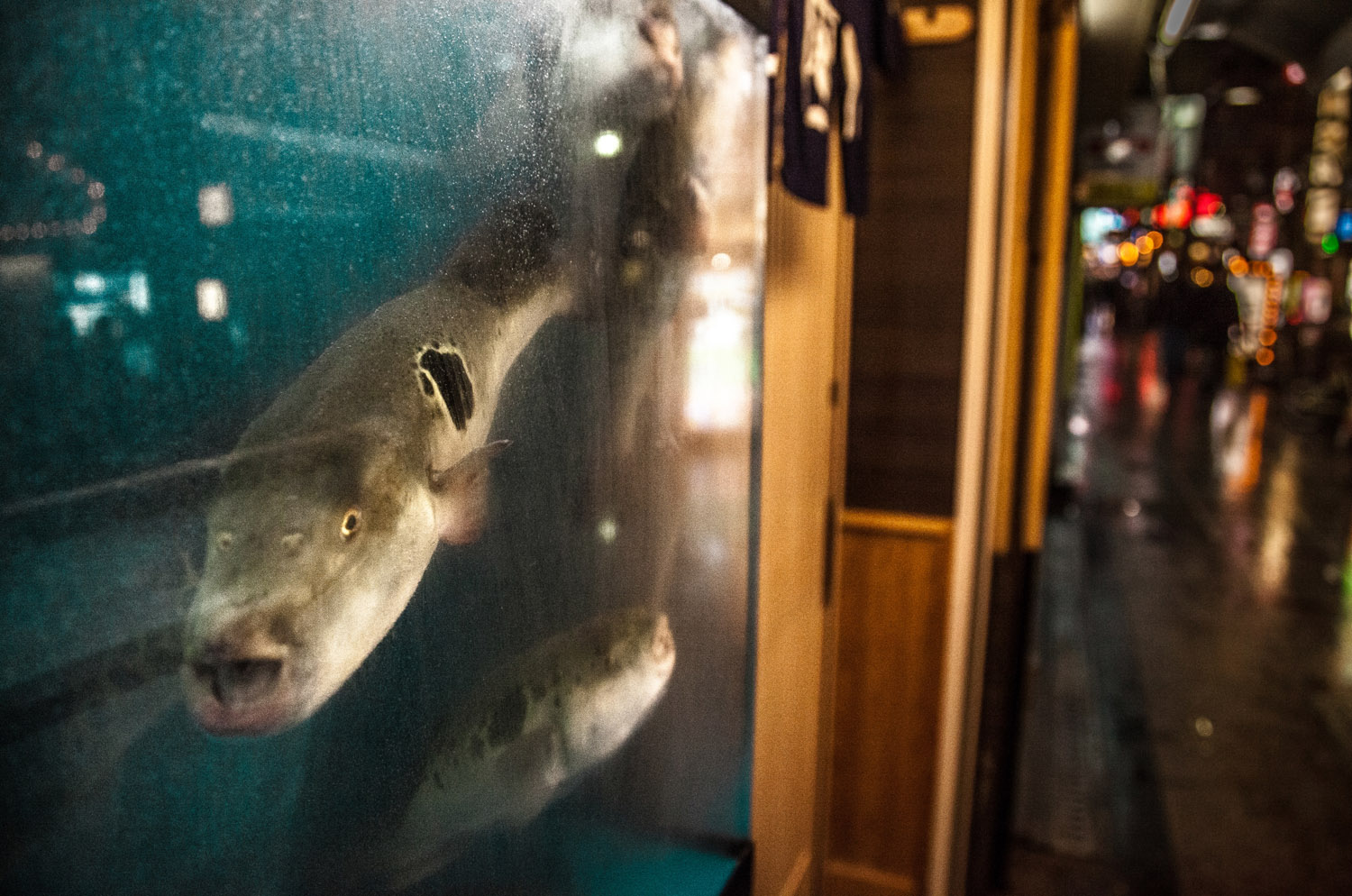 Poisonous Blowfish (fugu) stare out from their tank onto downtown city streets, Osaka

Dinners of fugu, although undeniably unique, are not included in my list of Japanese food cravings. A licence to legally prepare the fish takes at least two years of training; the final exam being failed by a third of applicants. I sat down to a fugu meal in Tokyo in the summer of 2013. Thoughts of my own mortality raced through my mind as I waited for the first two courses; sashimi, followed by tempura. When I put it in my mouth, I felt my face go numb. Even when expertly prepared, it seemed the flesh retained an anaesthetic quality. 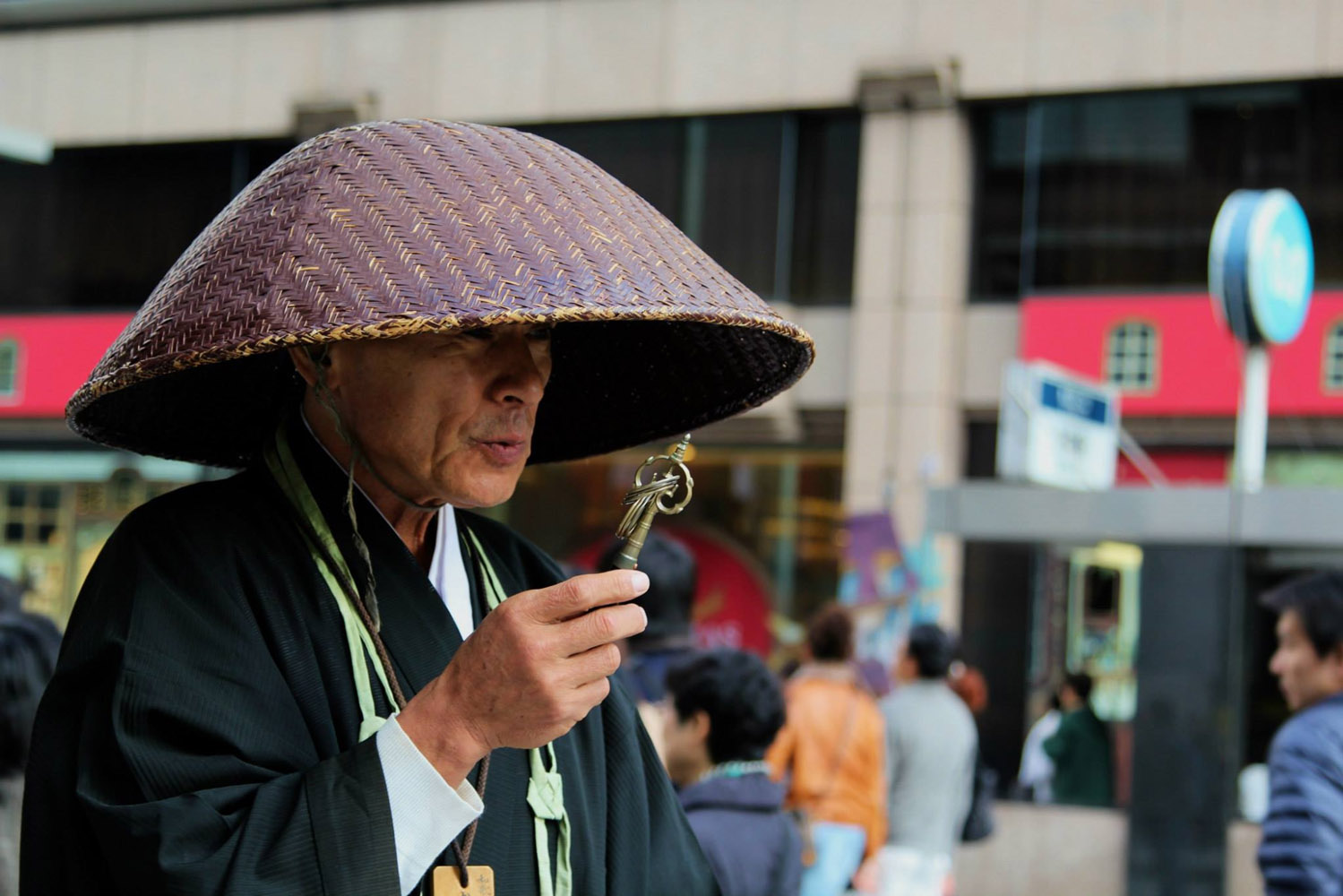 Zen Buddhist monk on the streets of Ginza, Tokyo

While walking through Ginza, Tokyo’s most upmarket shopping district, I came across a Zen Buddhist monk performing an alms tradition known as takahatsu. I hid in a doorway where I could observe without disturbing him. He focused his eyes into infinity and pursed his lips to aid a deep-breathing exercise. As shoppers milled past, it seemed plausible to me that he was the owner of the only clear mind in the center of the busiest city on Earth. 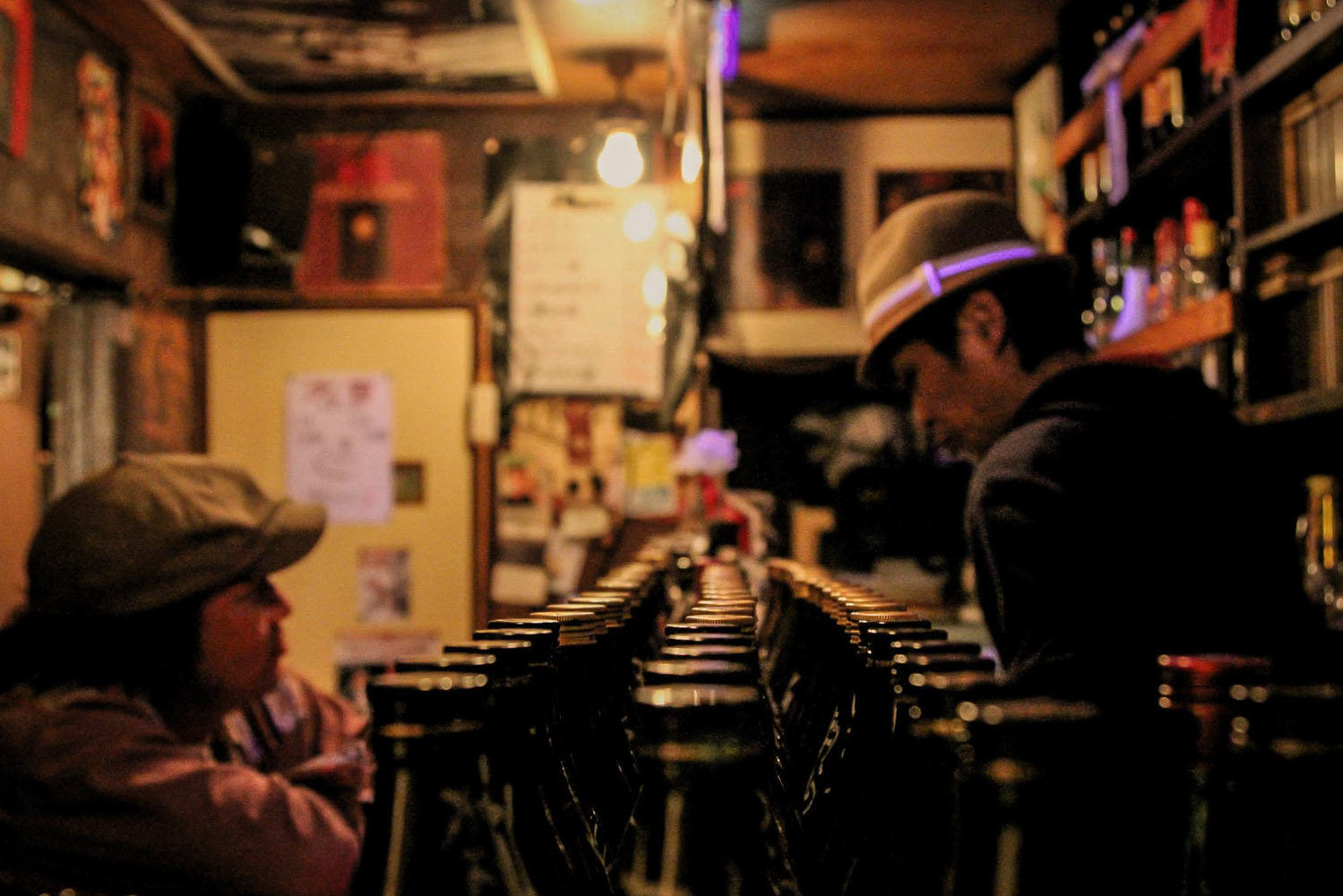 Inside Daikichi, a bar in Golden Gai – Shinjuku, Tokyo

I’m concerned after hearing rumours that Tokyo city planners, in preparation for hosting the 2020 Olympics, are going to wipe one of my favorite areas of the city off the map. Golden Gai is a maze of six tiny alleys packed with two-story, shoebox-sized, hole in the wall businesses. It used to be an unlicensed prostitution district, with bars downstairs and beds upstairs. Now they are just bars. Nearly two-hundred of them. It’s a fire trap and a lethal accident waiting to happen, but it’s brimming with the character of how old Tokyo must once have been. I should return before it’s gone. 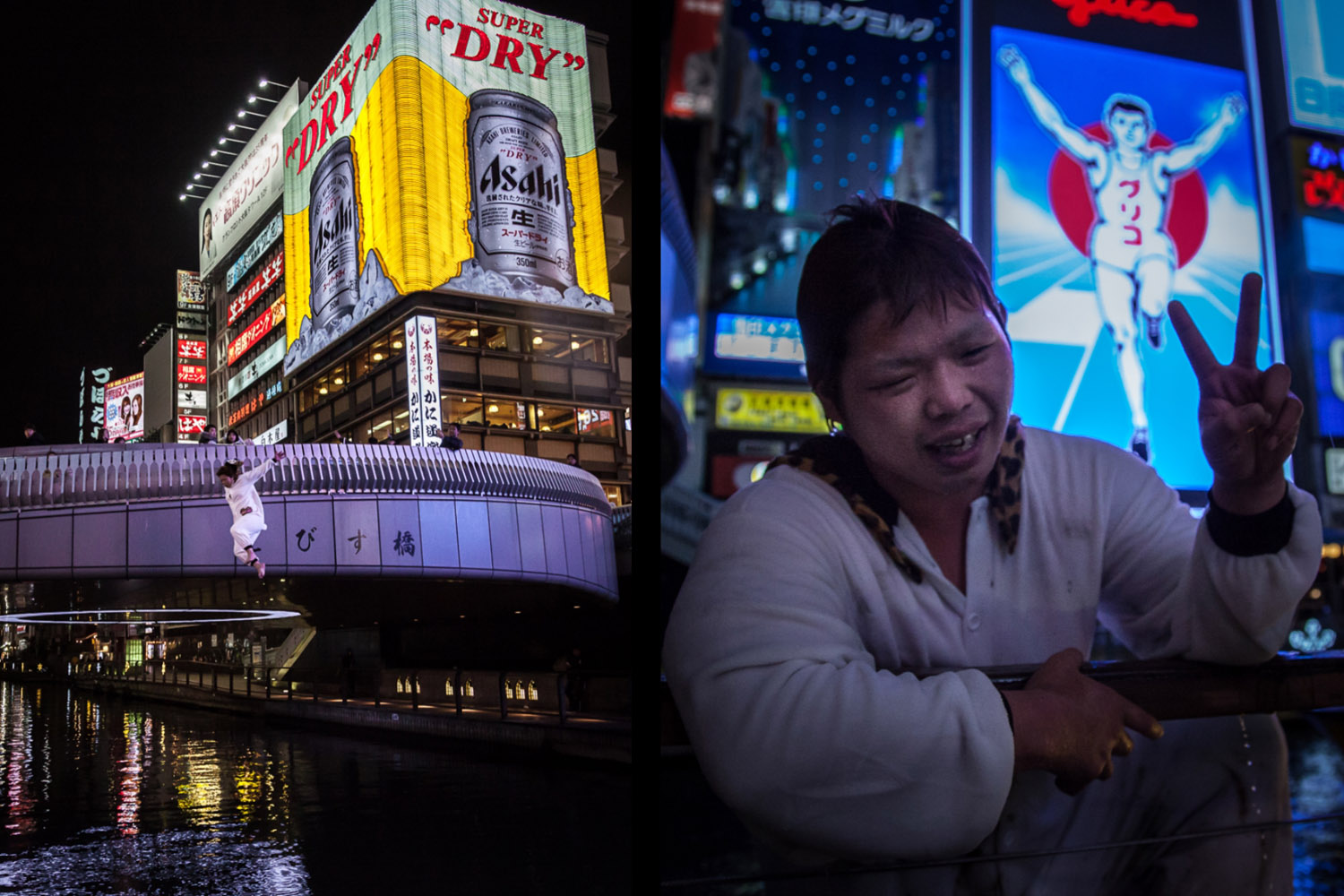 It all happened so quickly. A drunk Japanese man wearing a white onesie climbed a barrier and leapt into an icy canal. Capturing this event made a strong argument for permanently having my camera at the ready. I sprinted the fifty meters between us to give an impromptu interview. As he pulled himself out of the water, his cheering friends helped him to his feet. I got permission for a photo – Osaka’s iconic Glico Man neon sign can be seen in the background – but asking his name was met with just a cold, chattering jaw. I thought to myself that in another country, a shopping cart lurking an inch beneath the surface would’ve brought about a very different ending to the story. 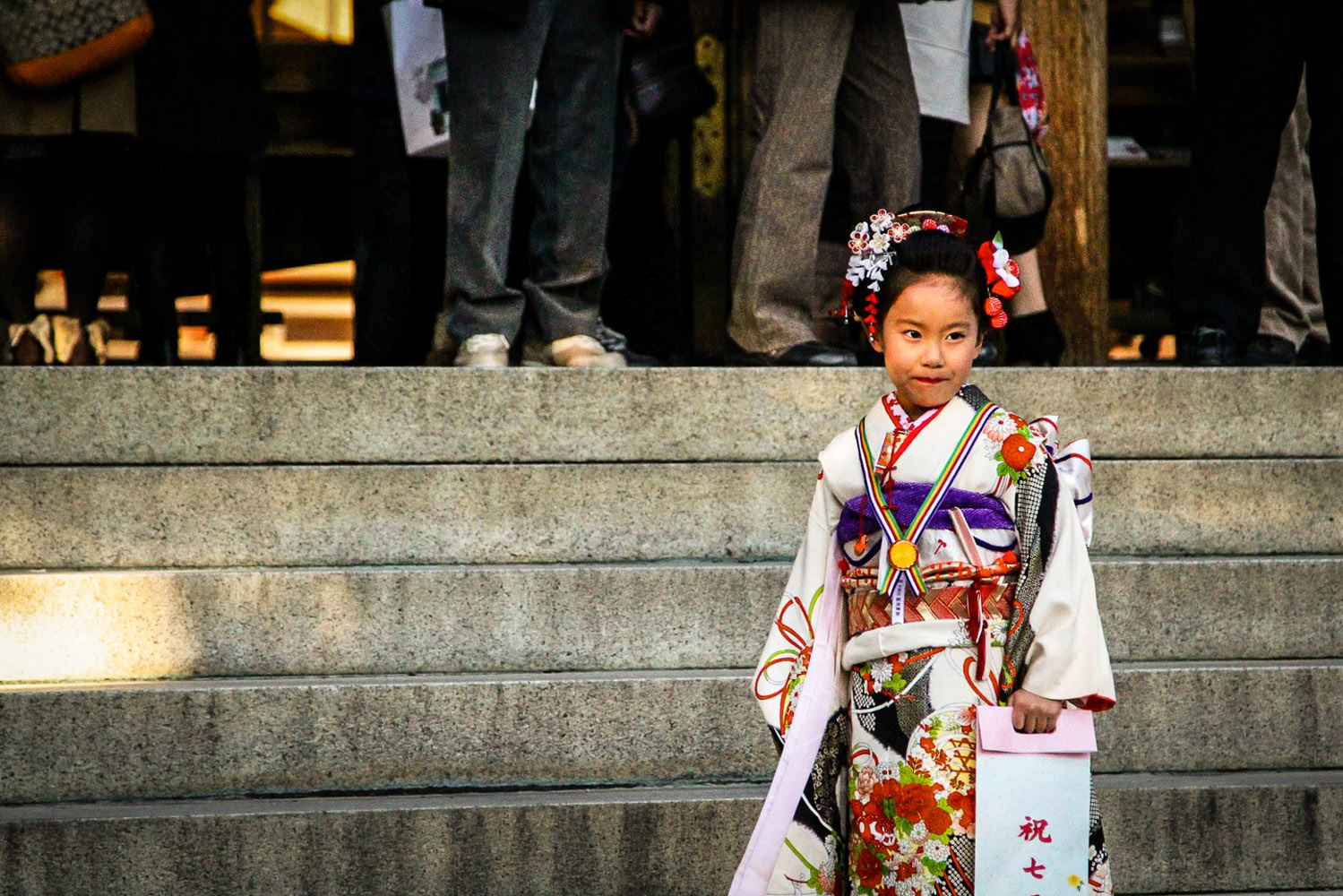 Young girl in a kimono stands on the main steps of a Shinto shrine, Tokyo

I shot this image at Meiji Shrine on the weekend proceeding Shichi-go-san day (Seven-five-three day), a rite of passage and festival day in November, celebrating the good health of kids growing up. When I showed this photo to my high school students, the word puraibashee – the English word ‘privacy’ after being adopted into Japanese – could be heard repeated throughout the classroom. It came as a shock to learn that Japan, the home of Canon and Nikon, has some strict privacy laws regarding street photography. I warily showed the next photo, in which a man in black with deep set eyes stared straight into my camera, as he led his tiny, kimono-clad daughter, towards the steps of the shrine. The word that echoed around the classroom was unmistakable. “Yakuza!” 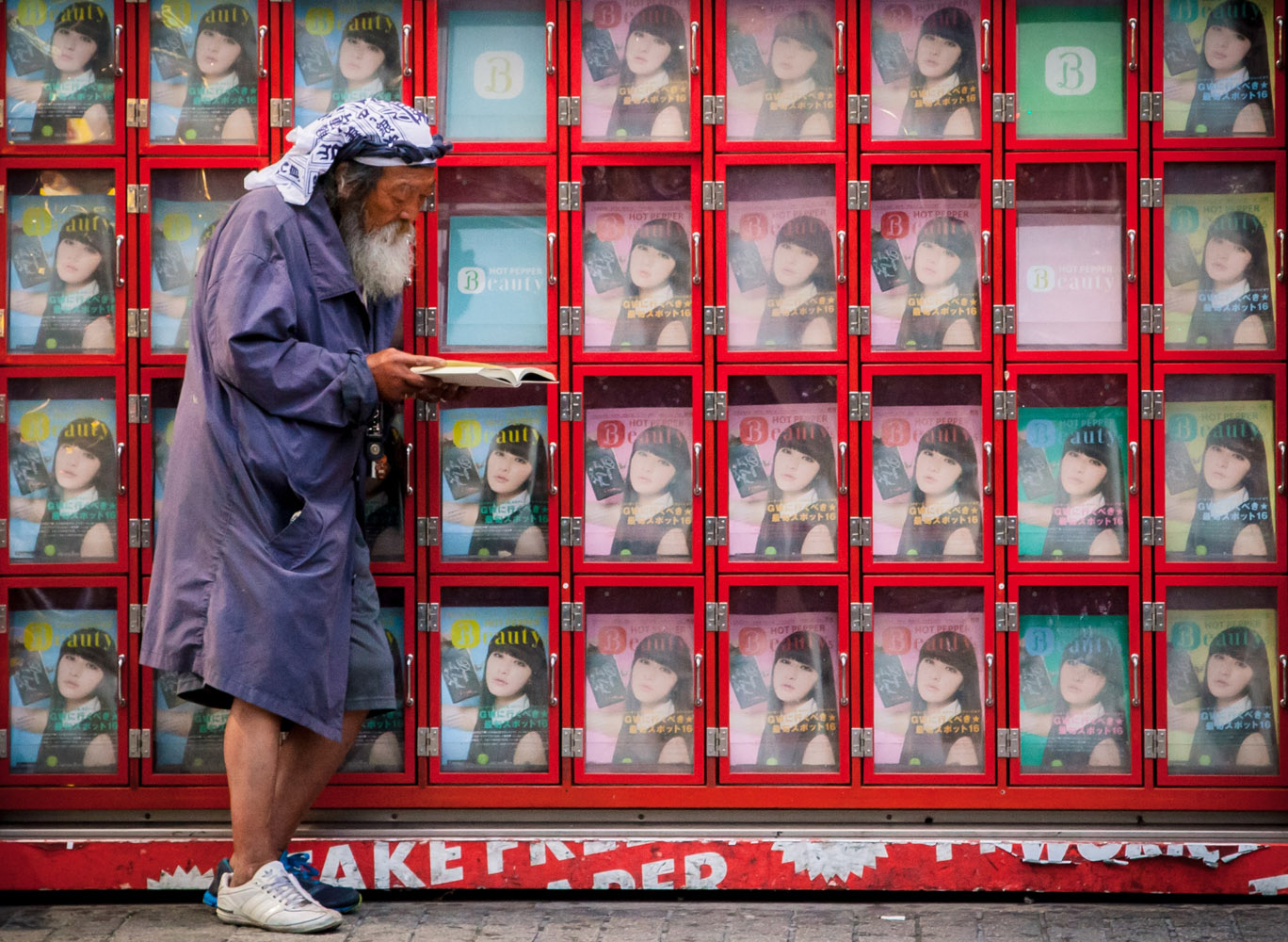 Rebellion (‘Please Help Yourself to a Free Fashion and Beauty Magazine’) – Shibuya, Tokyo

In this image, I hope that I’ve captured a little of what it is to reject the mainstream and go it alone. A bearded man wearing a robe and two odd sneakers stands reading a book in front of a rack of free fashion magazines with the word ‘Beauty’ repeated again and again. I was walking through Shibuya district in Tokyo and stopped dead in my tracks when I saw this. He disappeared into the rush hour crowds before I could get a chance to approach him, which is something I can’t help but regret. Was he making a conscious, anti-fashion statement? Never before have I wanted to know someone’s name and story so badly. 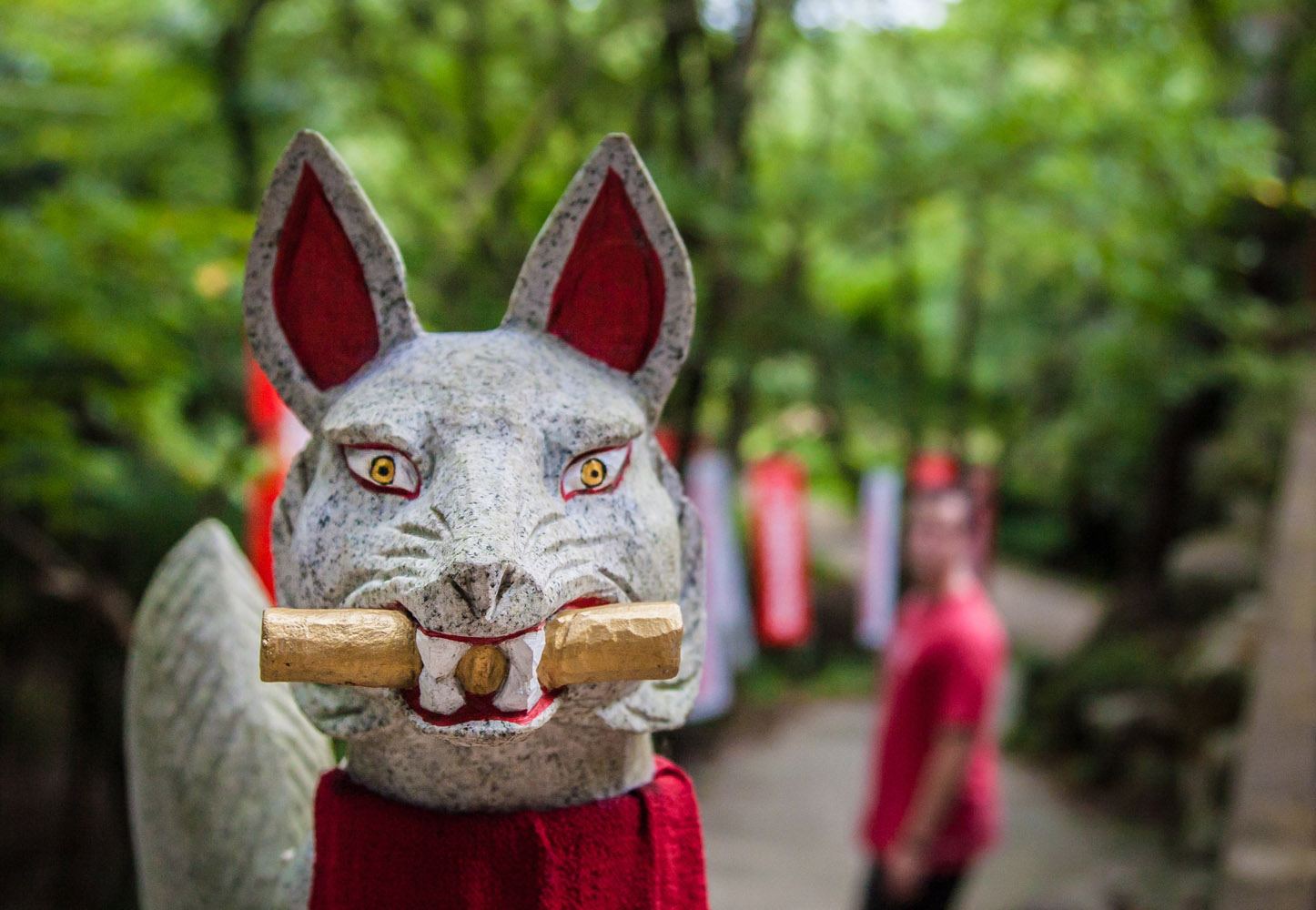 Kitsune is the Japanese word for fox, and all foxes are magical, especially according to Fujiwara-san. They are said to be able to change shape to look like anyone. Legend has it that this power manifests when they are one hundred years old. With every hundred years, they acquire a new tail as a sign of their age and power. He mentioned that they come “for good or for worse”, because they are often said to be malevolent. Many a man in Japanese folklore was tricked into marrying a fox disguised as a woman. I wonder if it has occurred to Fujiwara-san that kitsune might invade his dreams because he walks along a mountain path lined with their statues every day? 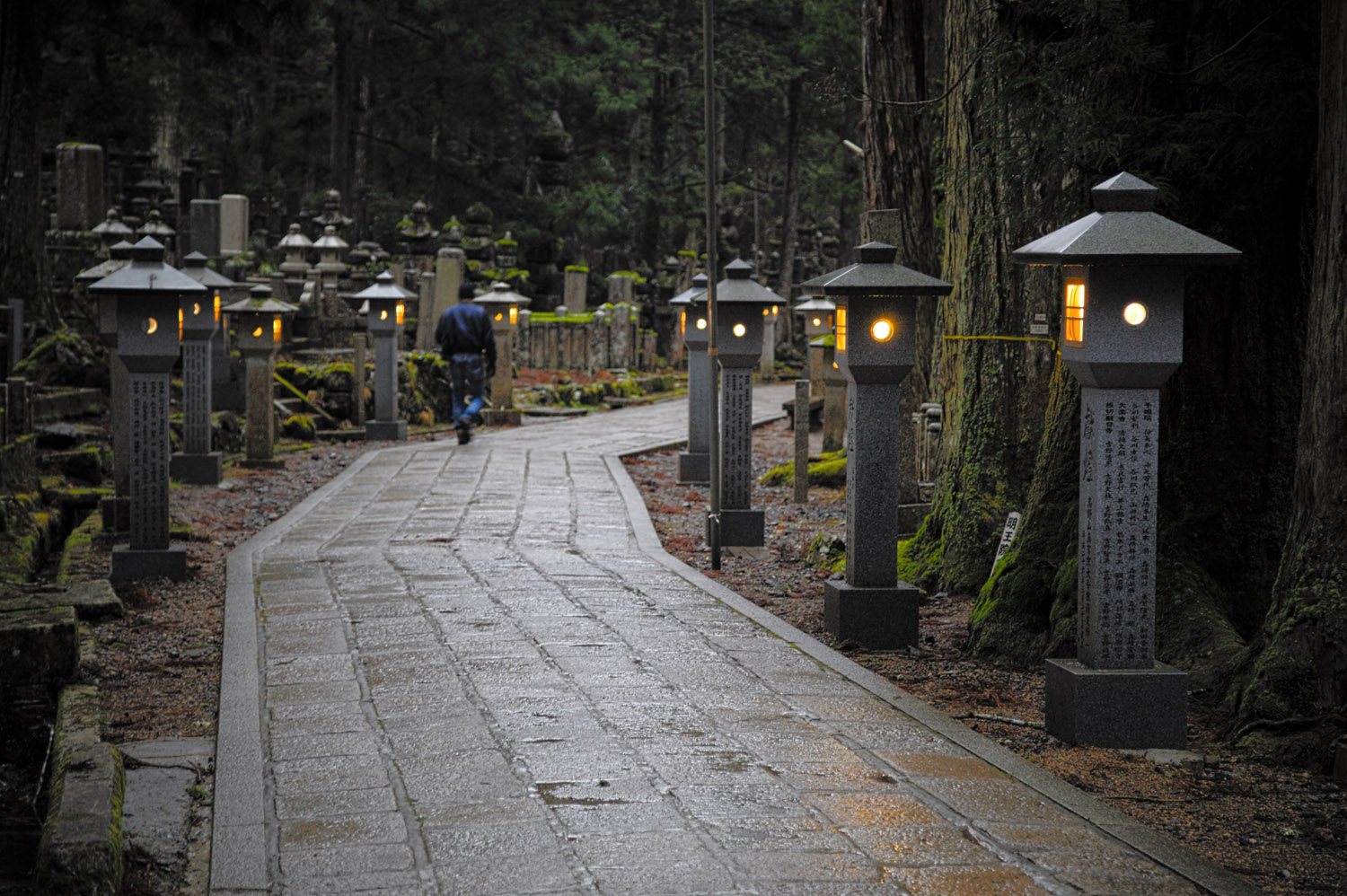 Having lived in both Japan and South Korea, I often get asked what I consider to be the major differences between the two peoples. My answer concerns the ideas of individualism versus collectivism. Koreans seem to do almost everything in couples, family or friendship groups. I’ve found that doing things alone is pitied and the desire to be alone often seems difficult for them to fathom. In Japan, it’s much more socially acceptable to eat out, go out, and travel alone. From my point of view, the Japanese are more comfortable with the act of being. 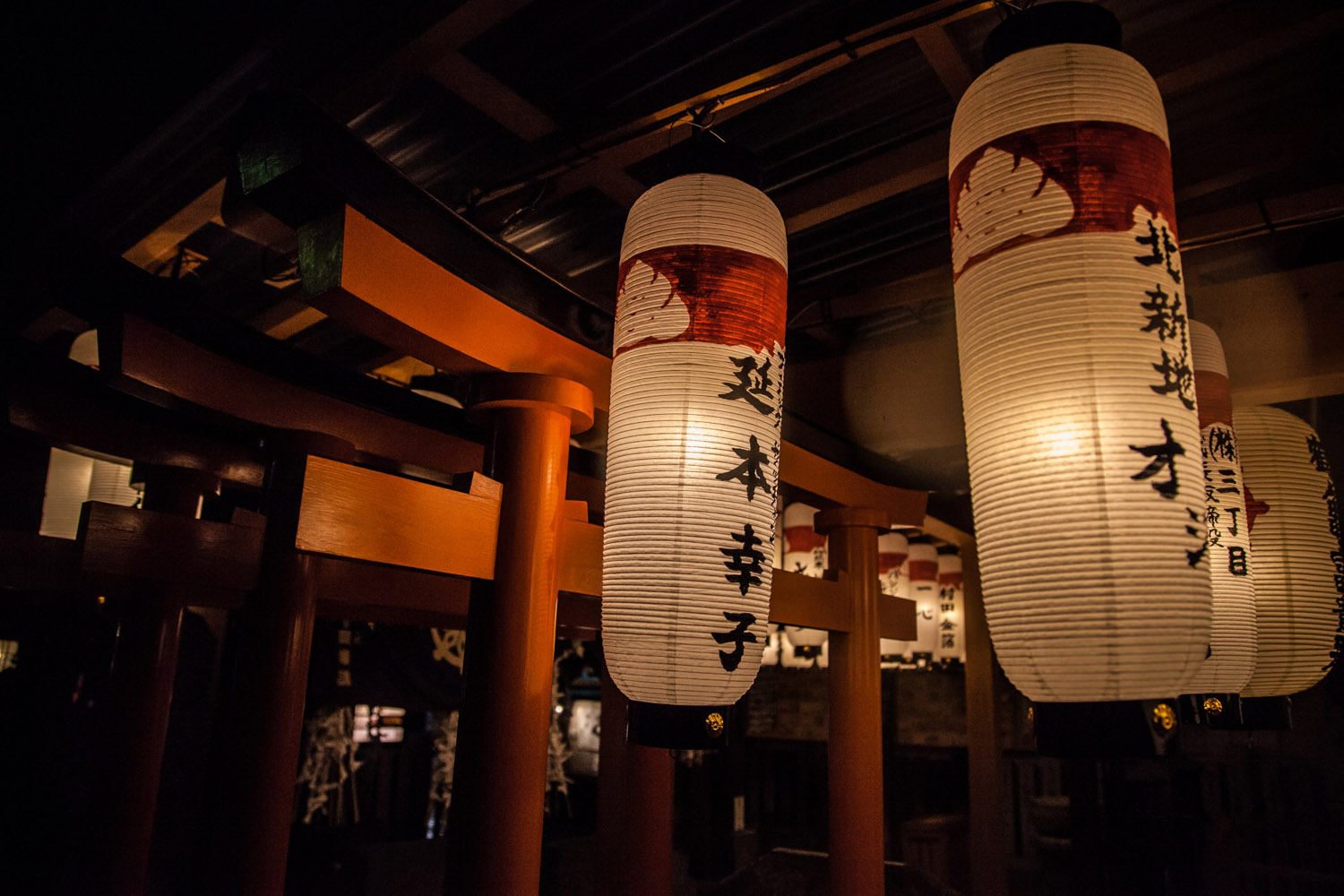 Japaneseness really is a word. Personally, it’s a feeling, or an essence distilled down across scores of nighttime photo walks. It’s a temple or shrine stumbled upon when I was not looking for one; black and red torii gates illuminated by long paper lanterns; a realization that I’m completely alone, and a gust of wind causing the lanterns to flick and flay as though they were dancing just for me. 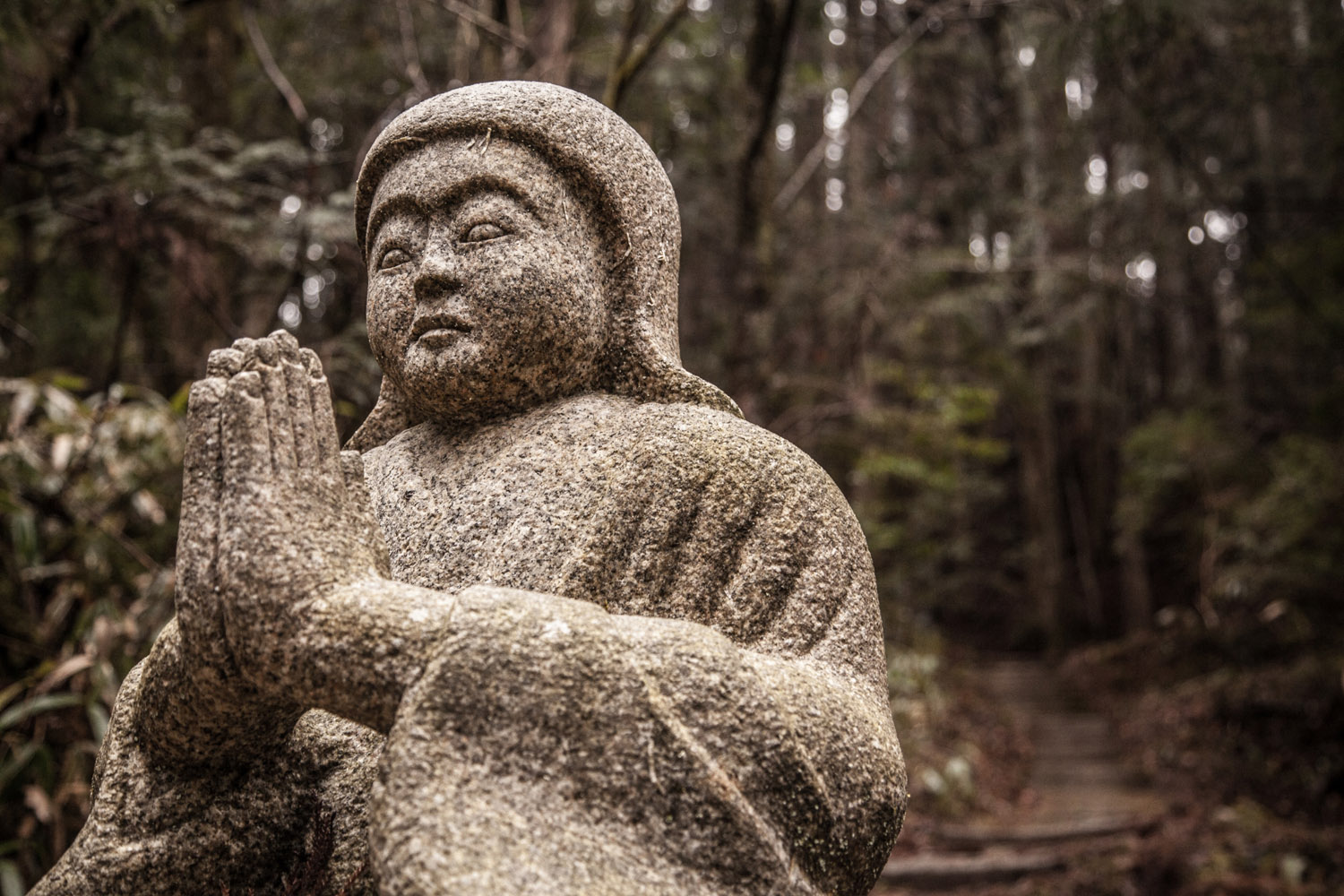 Okunoin is a mountaintop cemetery at Koyasan, a UNESCO world heritage site a day trip away from Osaka. It is the most atmospheric place that I’ve visited so far on my travels and I have a deep desire to return. Despite being the site of two-hundred thousand graves, it is said that there are no dead in Okunoin, only spirits in a state of waiting. On the day of my visit in February this year, the air was thick with mountain mist, and possibly the souls of two-hundred thousand Buddhist monks. 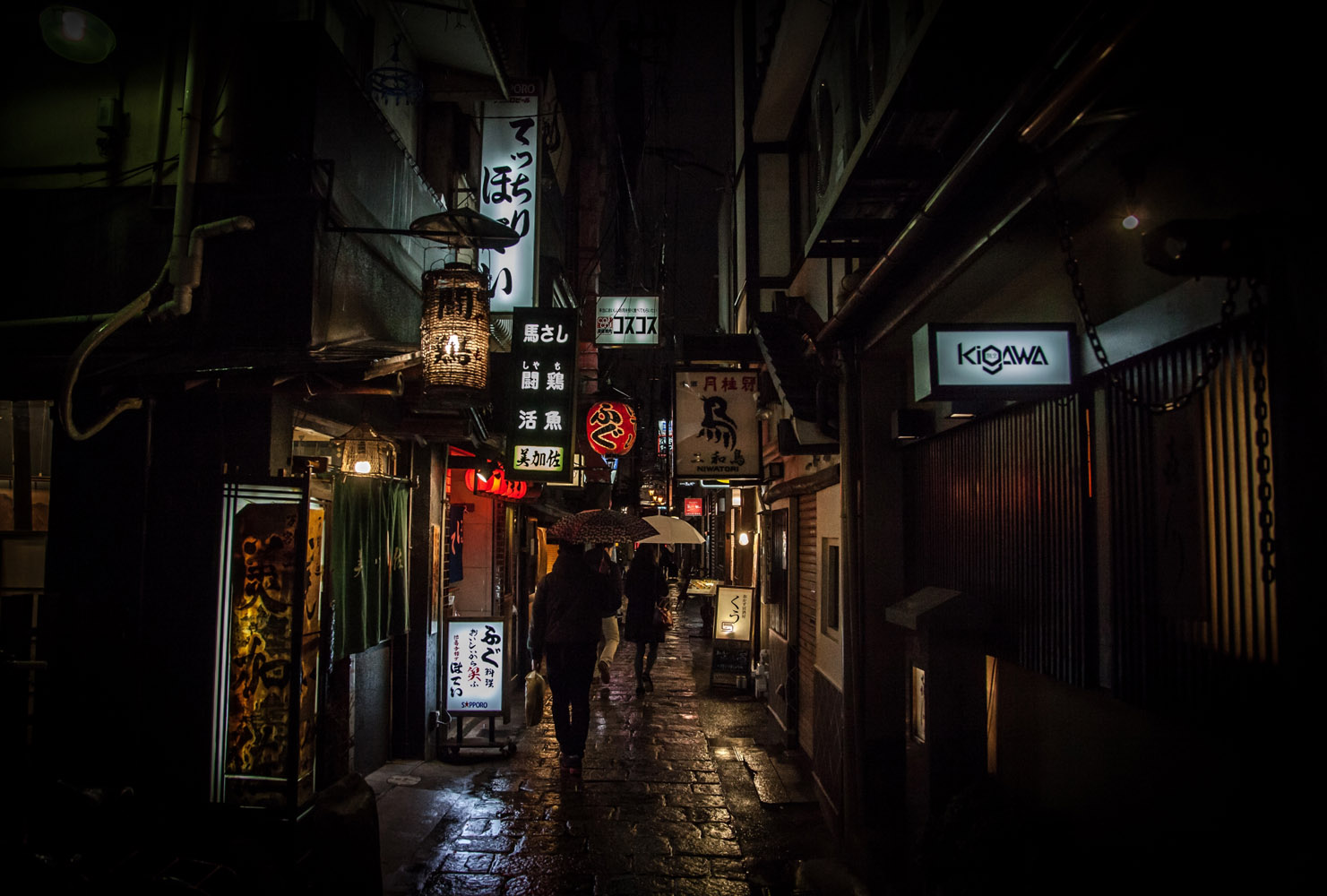 Back in the streets of Japan’s big cities, tranquillity can be found if that is what is sought. Narrow alleyways lead away from the noise and flashing neon of the main boulevards, and with every left or right turn after that, the lanes shrink in width, and street noise dims. I seek to be lost, so strain my ears and choose the direction that instinctively feels quieter, until it becomes impossible to discern. The few Japanese who pass by do not register my presence. At first it was strange, at nighttime in the quietest, darkest backstreets of its largest cities, my camera in hand, that I should feel safe and protected from harm. It is the closest thing to being invisible that I have known.

Tagged
Photo + Video + Film Japan
What did you think of this story?
Meh
Good
Awesome