IT IS ALMOST DAWN. The scent of night with its earthy dampness still lingers in the fresh air. Nature’s silence is broken by a guinea fowl’s cackle. His call is music to my ears as it heralds a new day. Soon the African sun will rise, its scorching heat drawing all moisture from the land. These pre-dawn moments are precious.

Tranquility is shattered by a voice filled with strength and presence. The guinea fowl falls silent with respect. It is the unmistakable low, insistent roar of a male lion. I had seen him earlier in the day with his brother, patrolling the vast expanse of wilderness that is his domain. He calls to the rest of his family, hoping to receive an answer from amongst the dunes. 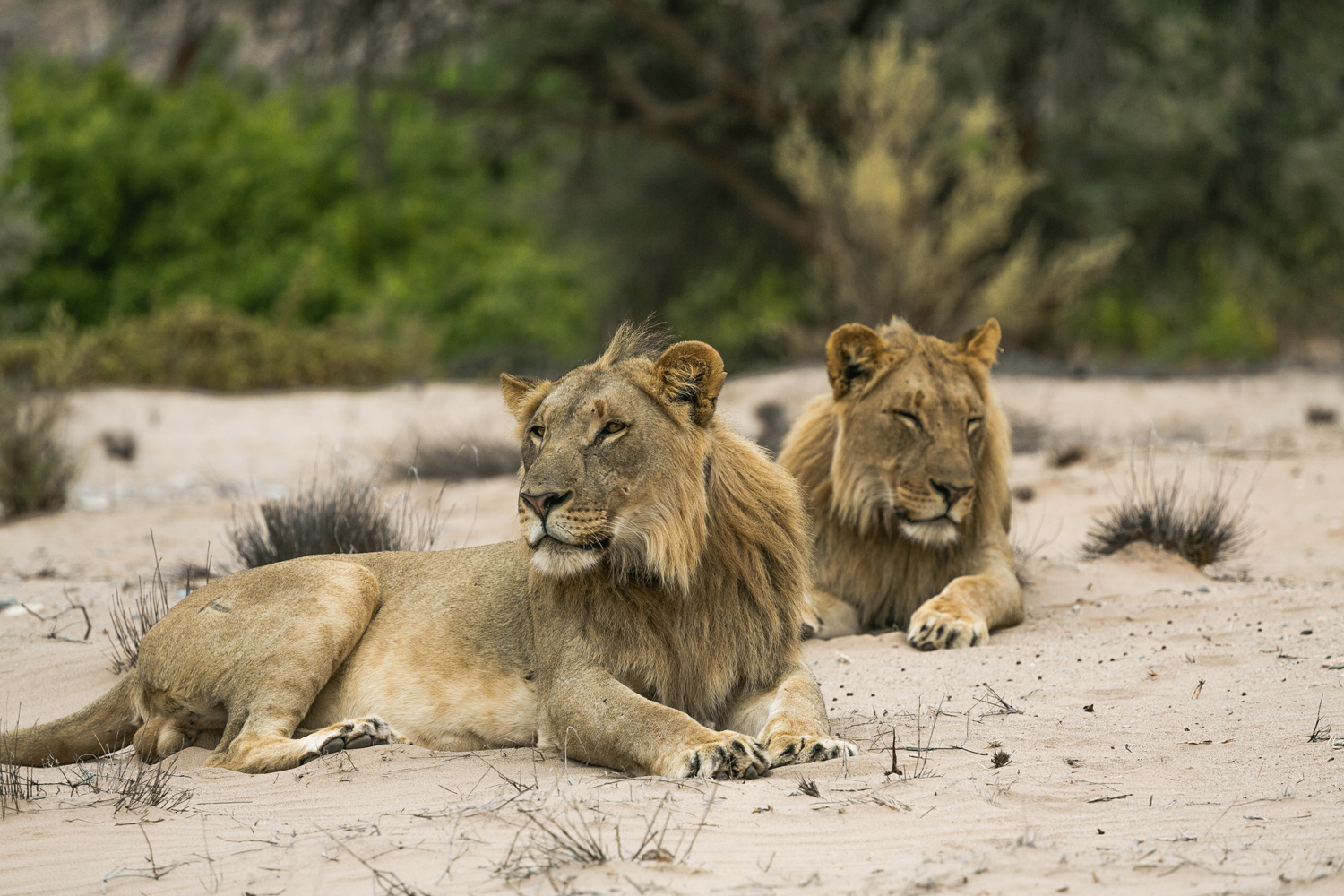 A Namibian friend told me “Once Africa is in your blood you will always come back.” Just like these two lions, who, despite being lords over a vast terrain, will always walk the same paths.

Desert adapted lions survive in one of Namibia’s most remote and inhospitable regions – the Skeleton Coast. Food and water are scarce, forcing them to roam huge distances. They naturally avoid human contact, yet from time to time hunger drives them to seek out farmers’ livestock. Unfortunately the consequences are not always favorable for the lions.

The lions I saw are featured in a documentary entitled “Vanishing Kings”, which chronicles the plight of one specific pride called the Five Musketeers. With the film’s help, and through a dedicated tracking and collaring program, conservationists hope to secure the future of these endangered animals. 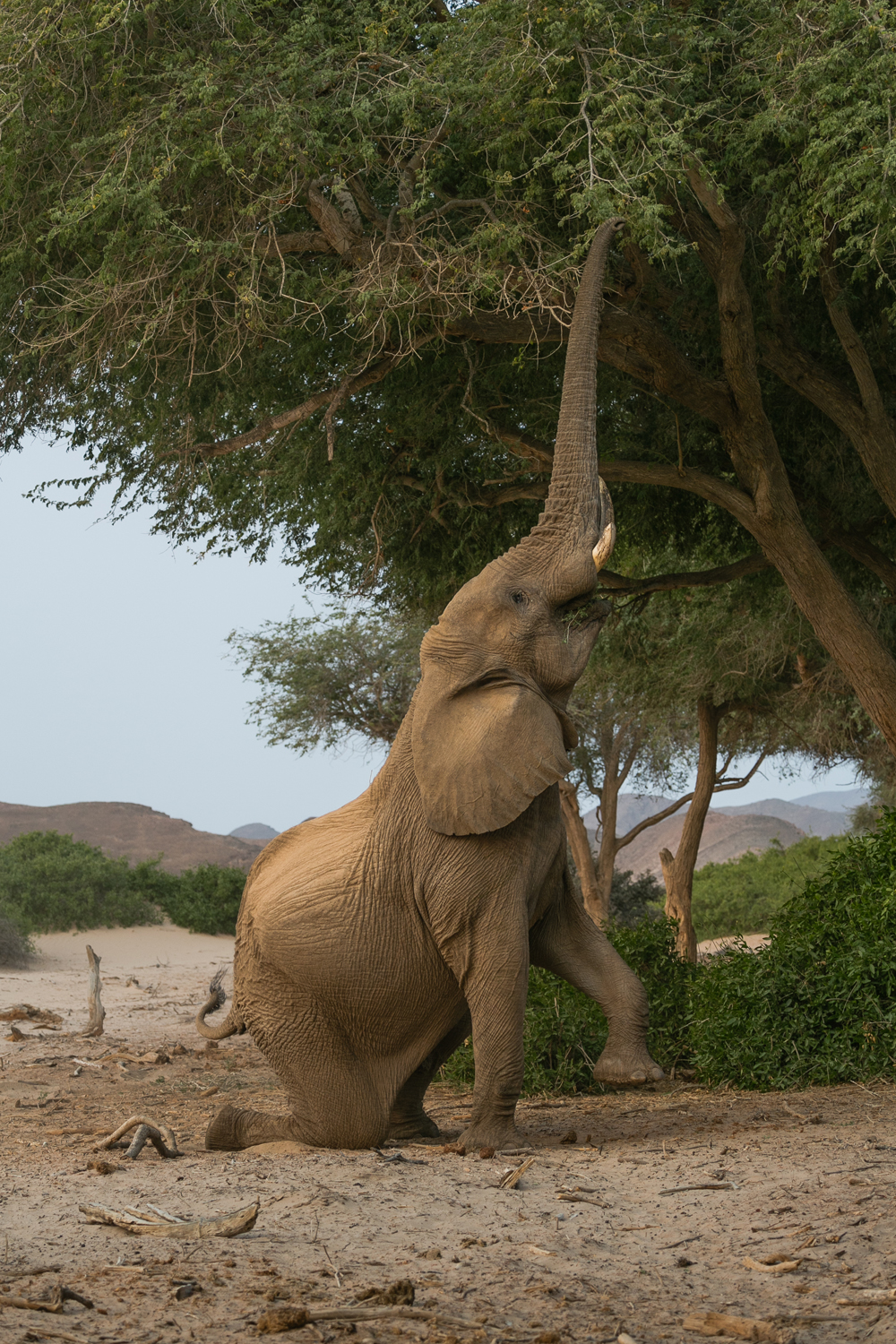 A desert adapted elephant in the Hoanib River valley

I have seen elephants do tricks like this in the circus. Yet Namibia’s desert elephant is a master of adaptation. Living in some of the driest areas of the planet, it has refined its taste for the vegetation that thrives here – mainly in the riverbeds. Ana, or anaboom, trees are not only nutritious. Their fruits prove to be irresistible snacks worth every physical effort. And the perfect reason to pose for a photo. 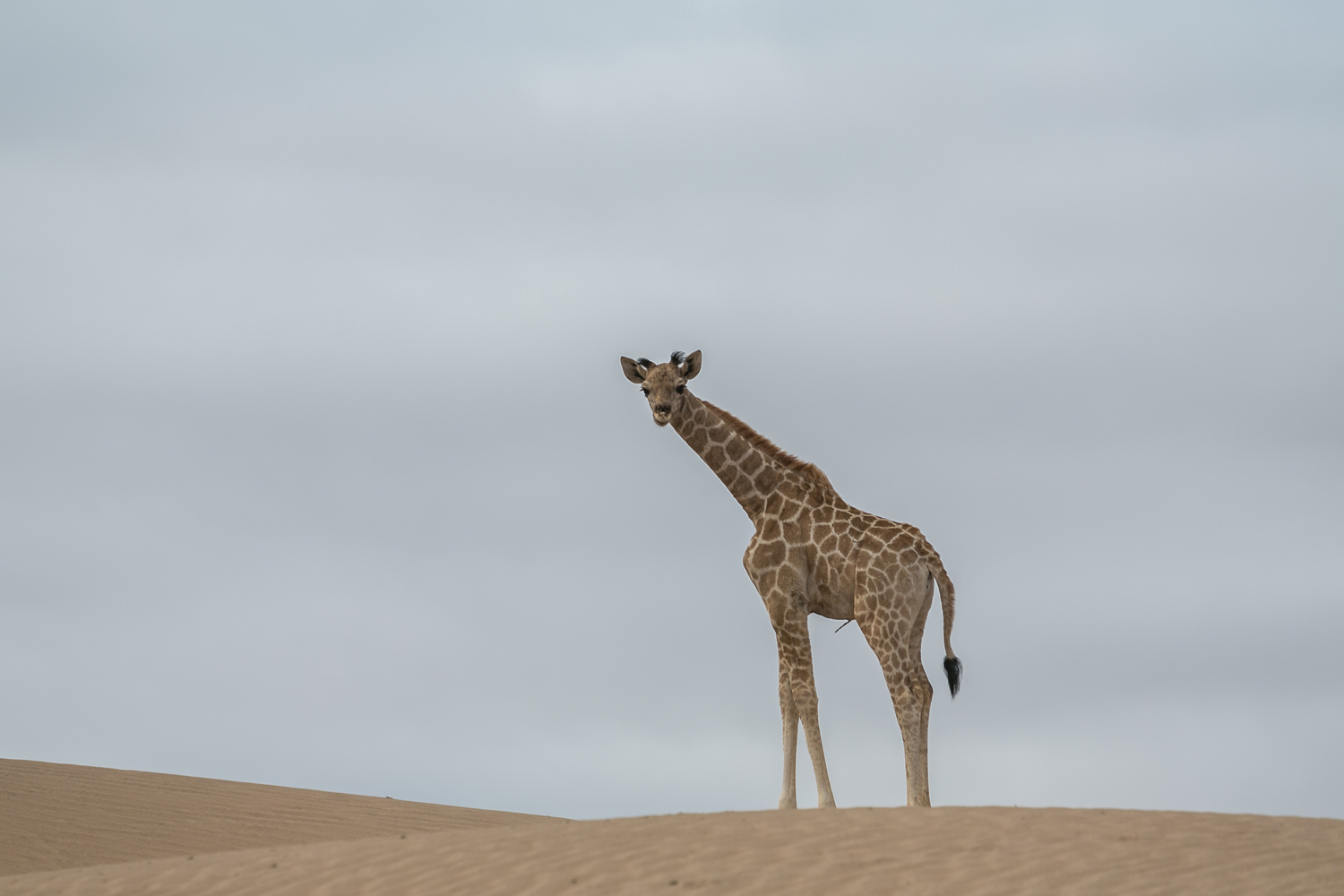 A young bull giraffe in the Hoanib River valley

As with most of Namibia’s animals, the giraffe has also adapted to the country’s dry, sandy regions. In the Hoanib River valley, however, plentiful acacia and ana trees provide more than enough sustenance for this little bull. His mother had already disappeared behind the sand dune. He knew we were watching him, yet slowly ambled up and over the hill – even stopping to say good-bye and pose for a nice shot. 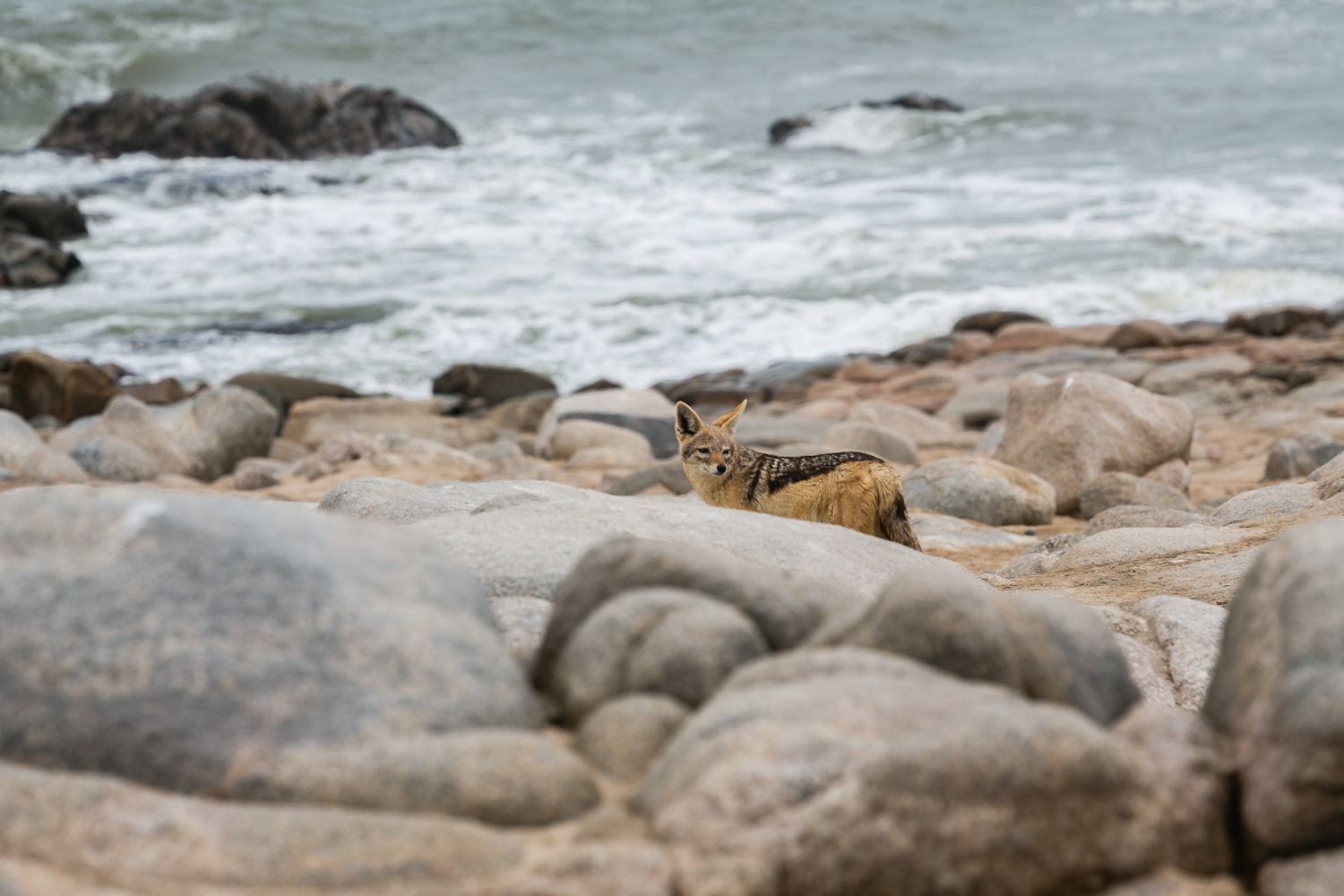 A black-backed jackal looks for food along the Skeleton Coast

Black-backed jackals are named for the dark saddle across their backs. They are Africa’s scavengers, yet also eat plants and hunt for fresh meat in the form of smaller animals. Along Namibia’s Skeleton Coast a small population has adapted to the environment by preying on baby seals. This solitary male was working his way along the beach to a large cape fur seal colony when I spotted him amongst the boulders. 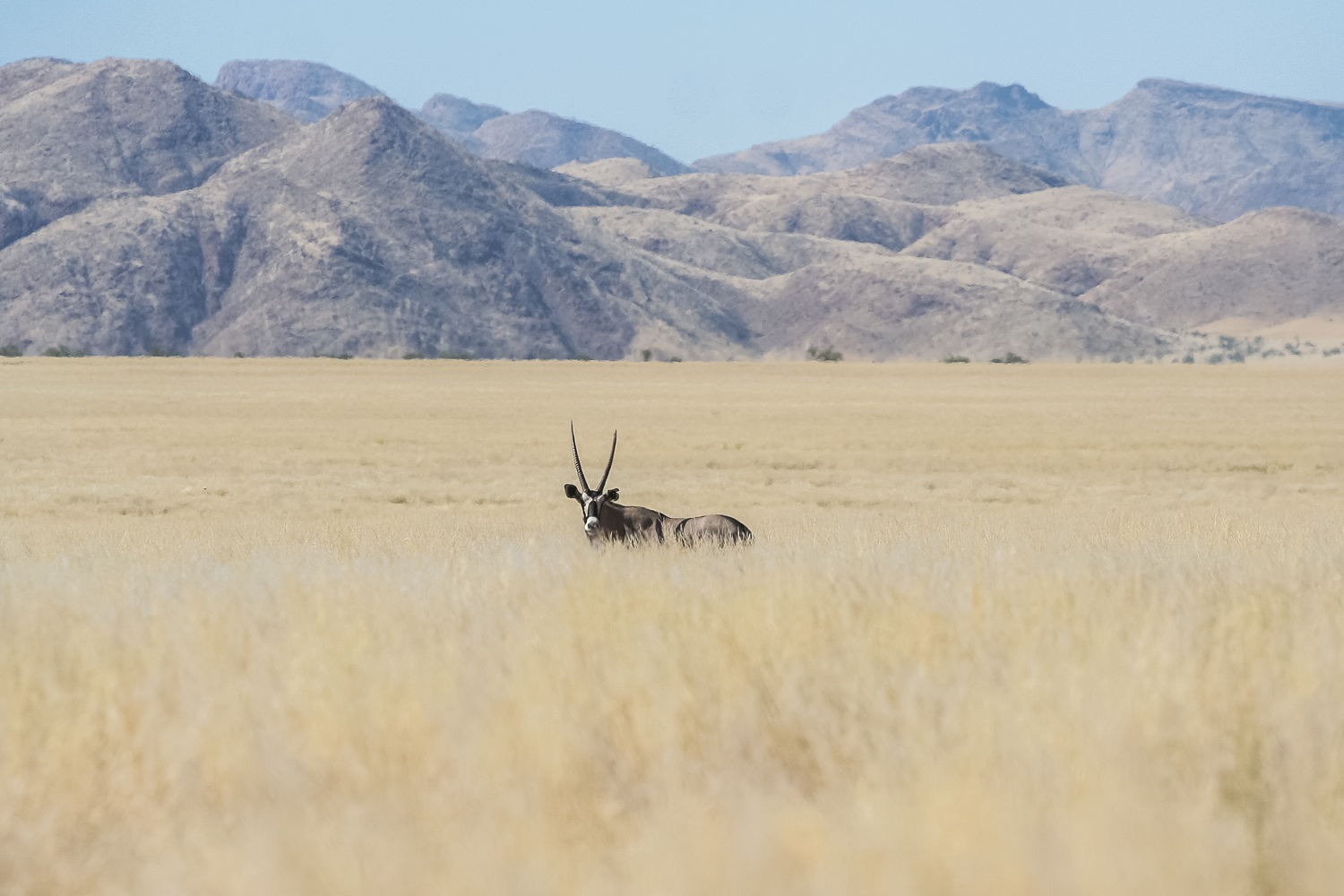 A lone oryx amongst the grasses of the Kaokoveld

Some of my best moments in Namibia were spent exploring remoter regions with just a tent on the car roof. This is, in my opinion, the best way to experience untouched nature. Oryx like this one do not feel threatened by considerate, respectful “game viewing”. It is this balance of human and animal interaction that allows us to coexist. And it is this coexistence which makes Namibia so unique. 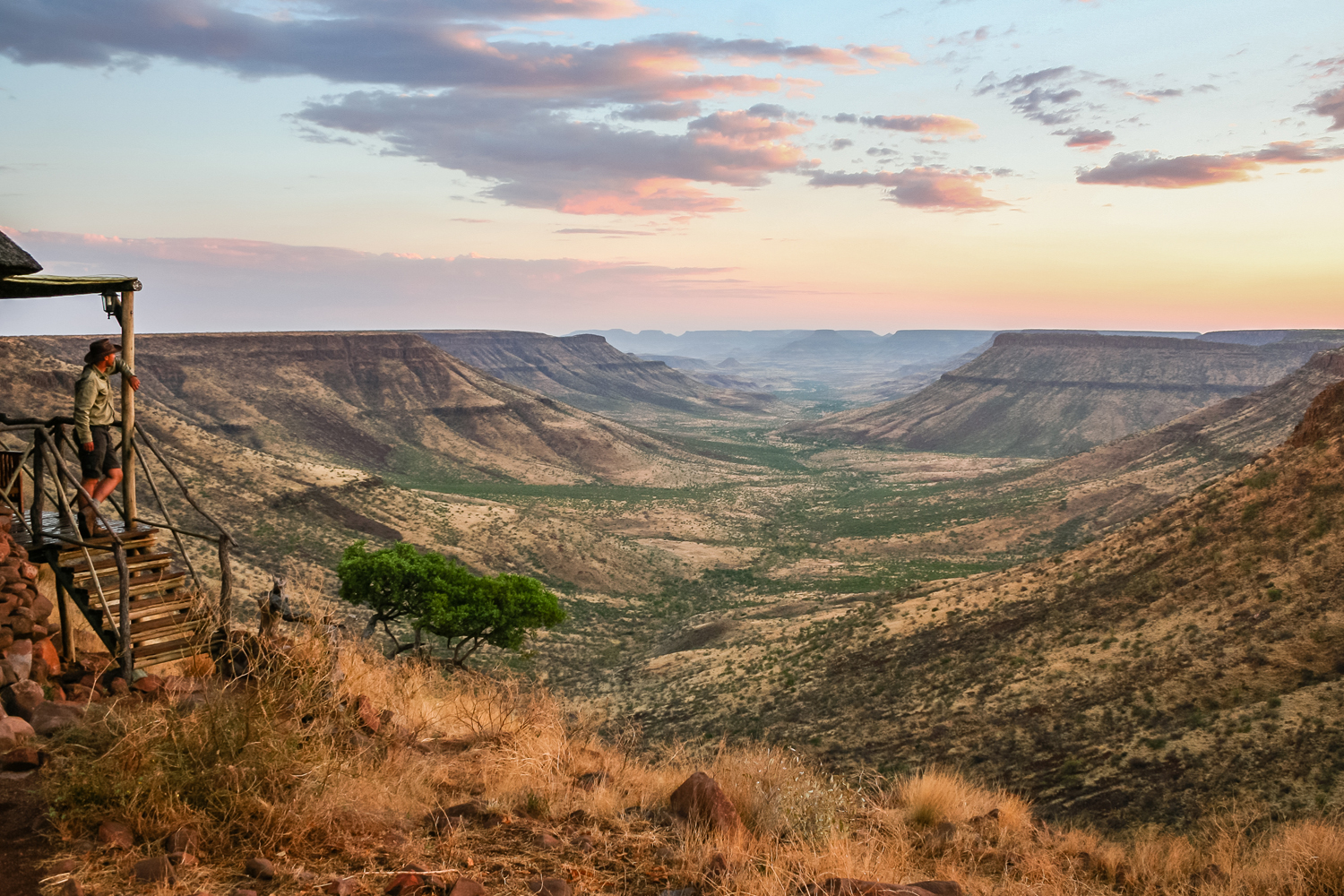 The Klip River valley as seen from Damaraland’s Grootberg plateau

The Klip River valley in Damaraland is one of my favourite places in Namibia. Seen from Grootberg Lodge on top of a plateau and best enjoyed at sunrise and sunset, this valley is the perfect marriage of endless sky and stunning landscape. It is home to abundant wildlife and unique because there are no physical boundaries. Desert elephant, giraffe, mountain zebra, kudu, springbok, lion, leopard, cheetah … All roam free as animals in Africa did before they were stopped by fences and roads. 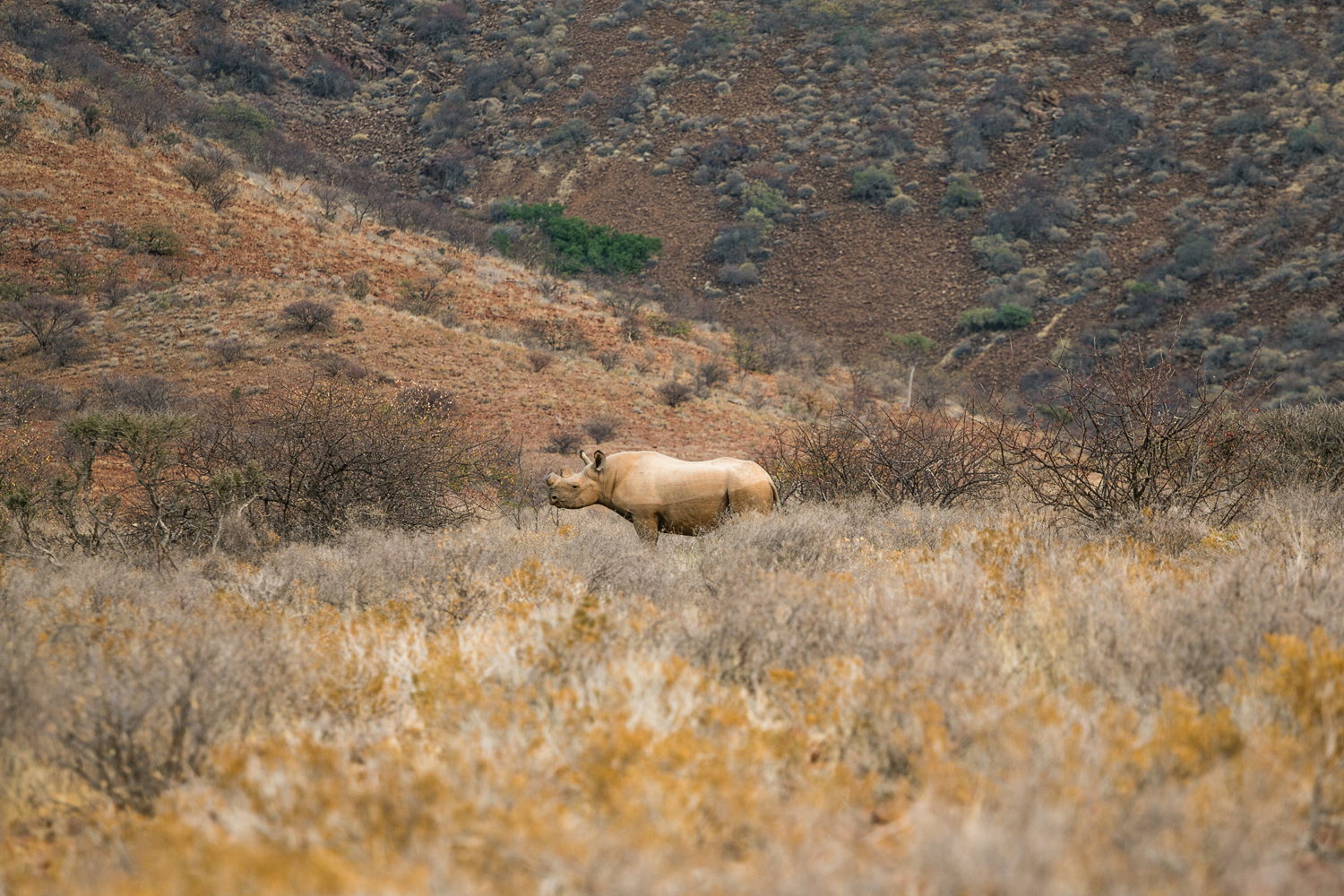 Getting up at 4am may not feel like a holiday. Yet when the prize is to see a rare black rhino it is worth the effort. Namibia’s black rhino population numbers remain undisclosed to protect them from poachers. Rhino horn is a prized commodity, especially in Asia, and black market prices can reach US $100,000 per kilogram. Some lodges work with local conservation programs, like Save the Rhino, and offer guests the chance to follow rhino on foot. The animals are micro-chipped for security and tracked using telemetry. This allows guests like me to see them from a healthy distance, whilst eyeing up potential trees to climb should they decide to charge. 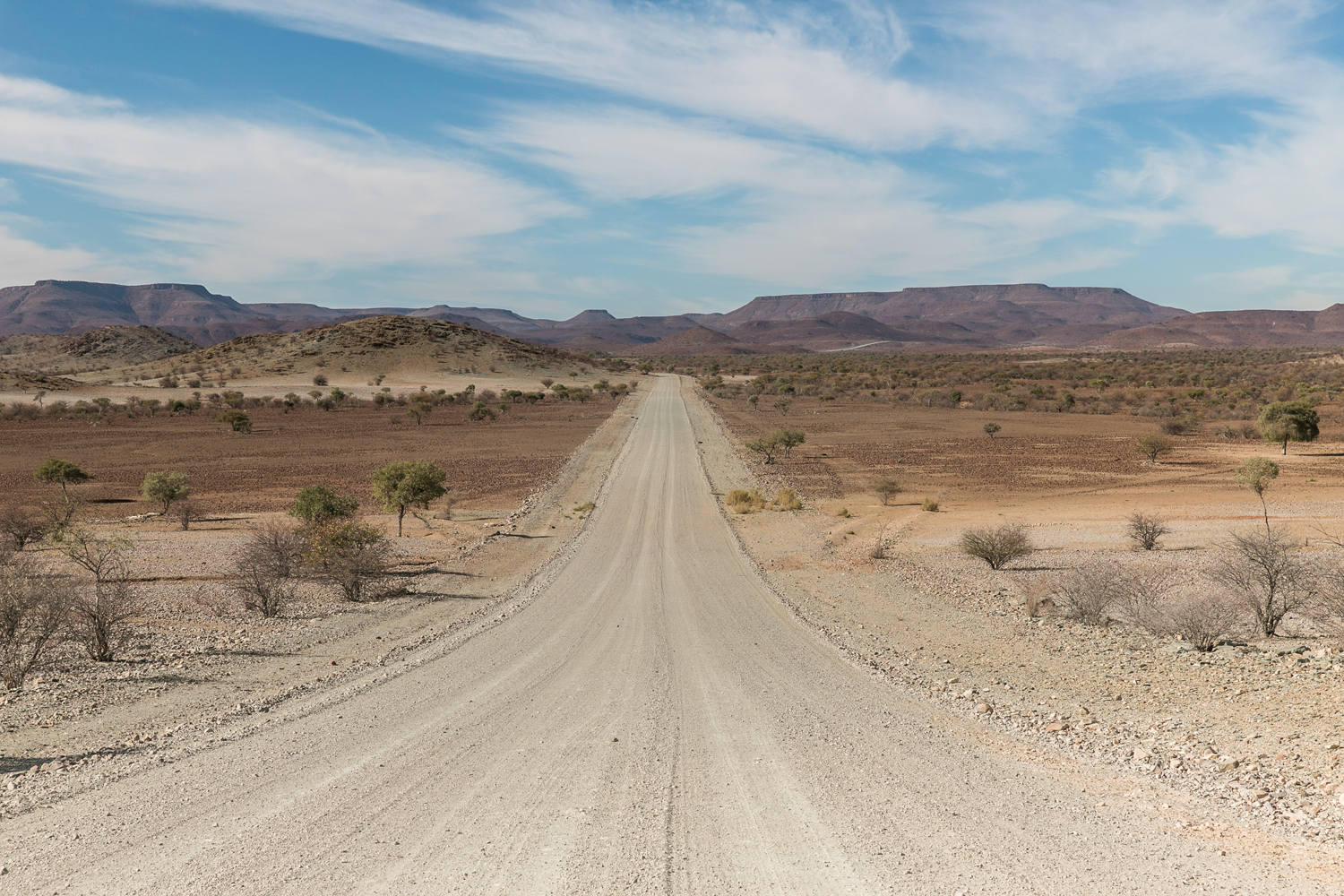 Endless road and sky in Damaraland

Namibia is a vast country, and to fully appreciate all 825,000 square kilometers you need to drive – a lot. Roads follow a strict code of composition depending on their importance. Primary roads are paved, secondary roads contain gravel and tertiary roads are dirt (and often prone to really annoying corrugation). Anything after that is a vague indentation in the grass and anyone’s guess! I never understand why people are in a hurry when they have landscapes like this to enjoy. 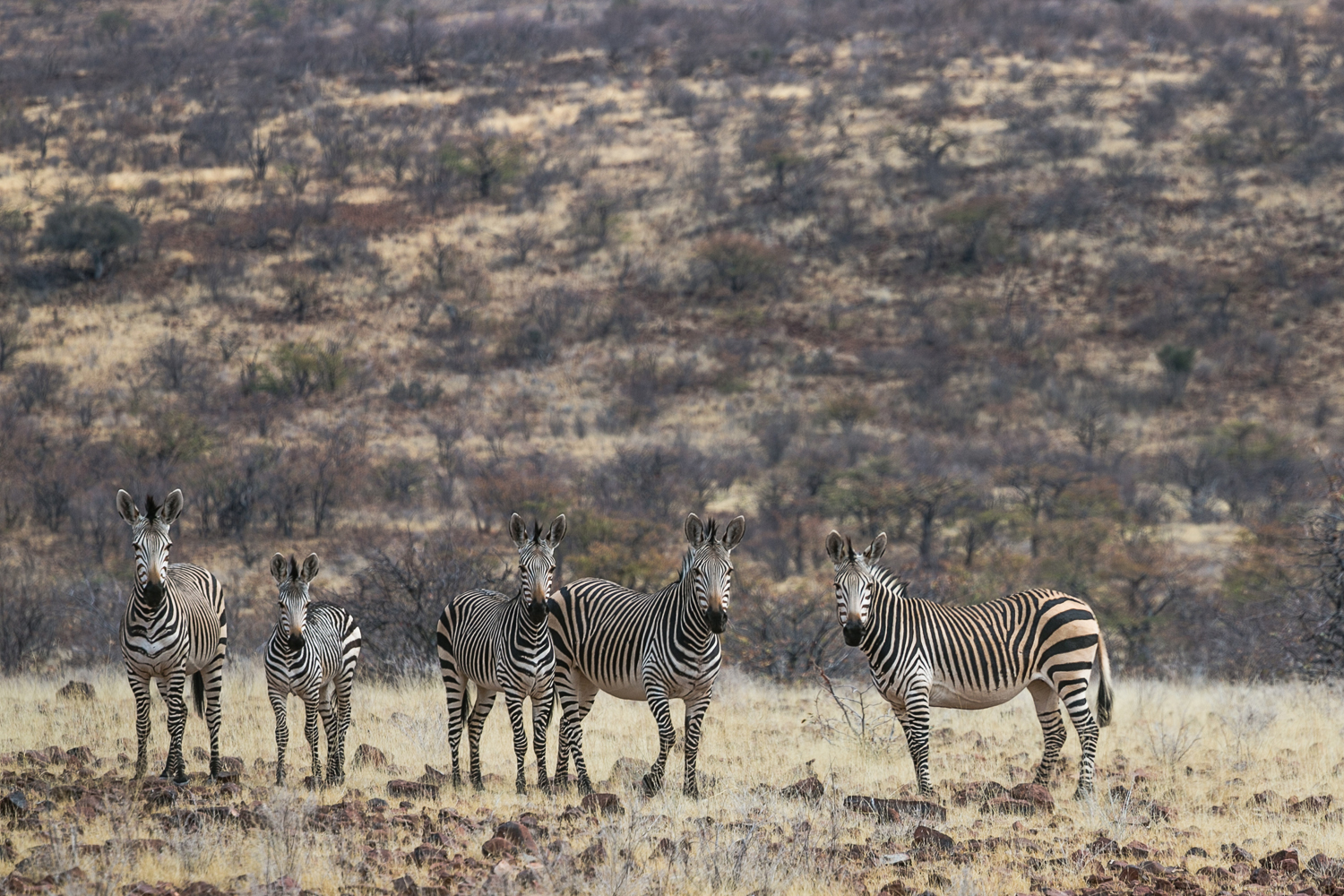 A small herd of Hartmann’s mountain zebra in Damaraland

Namibia’s Hartmann’s mountain zebra are one of my favorite animals to watch and photograph. Their black and white patterns stand out from the rocky terrain, providing a sharp contrast. Yet they still manage to melt into the background when taking flight, leaving only a dust cloud behind. These zebra are classified as an endangered species due to over-hunting, yet seem to be thriving in certain areas thanks to conservation efforts. 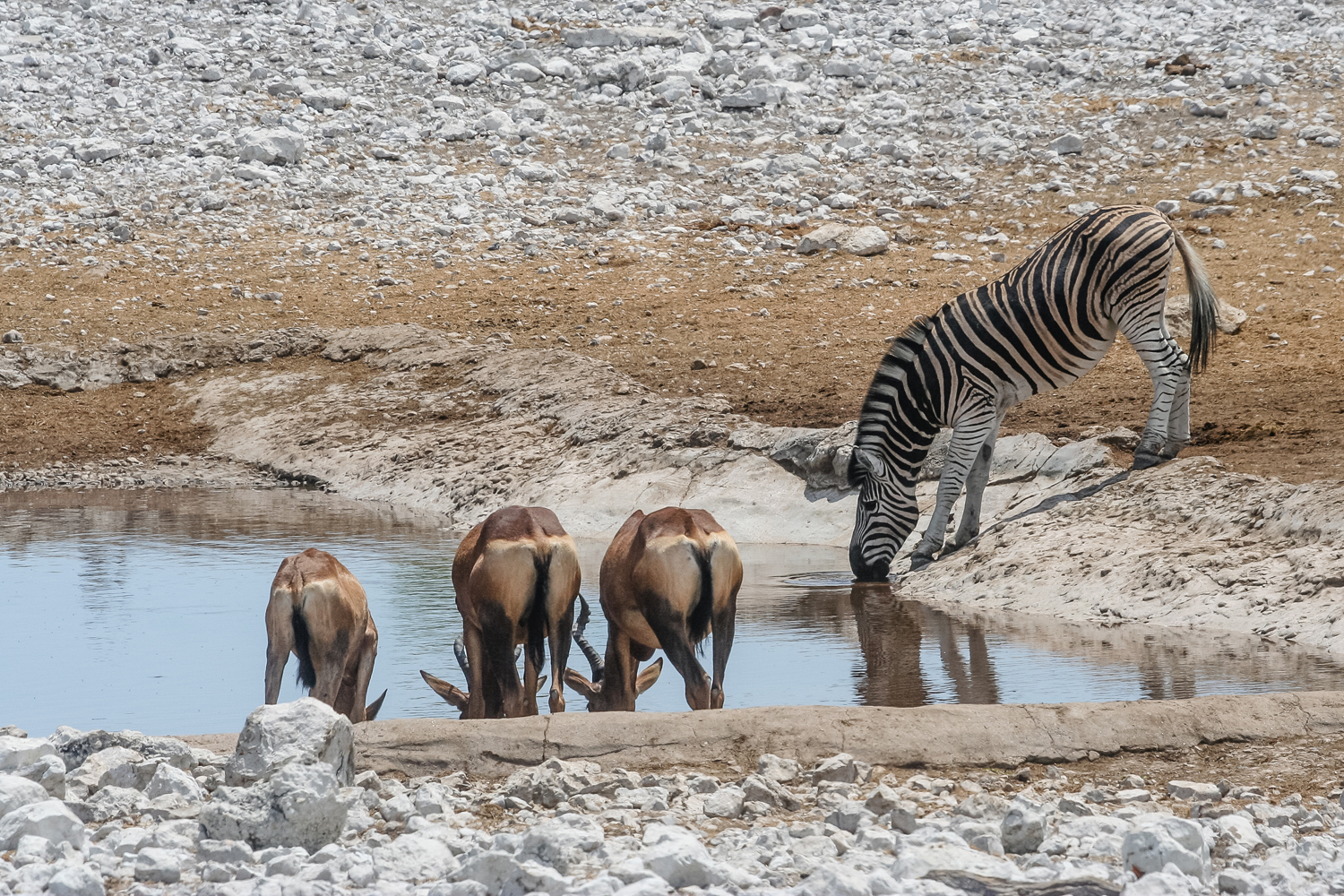 One of the highlights of any Namibia trip is a visit to Etosha National Park. Half the size of Switzerland, Etosha is one of the largest wildlife sanctuaries on earth. Interference with animals is strictly forbidden and this is one of the main reasons why this park really works as a wildlife experience. Nature’s cycle is uninterrupted. And the watering holes are where the action is, for in an arid country like Namibia water means life. 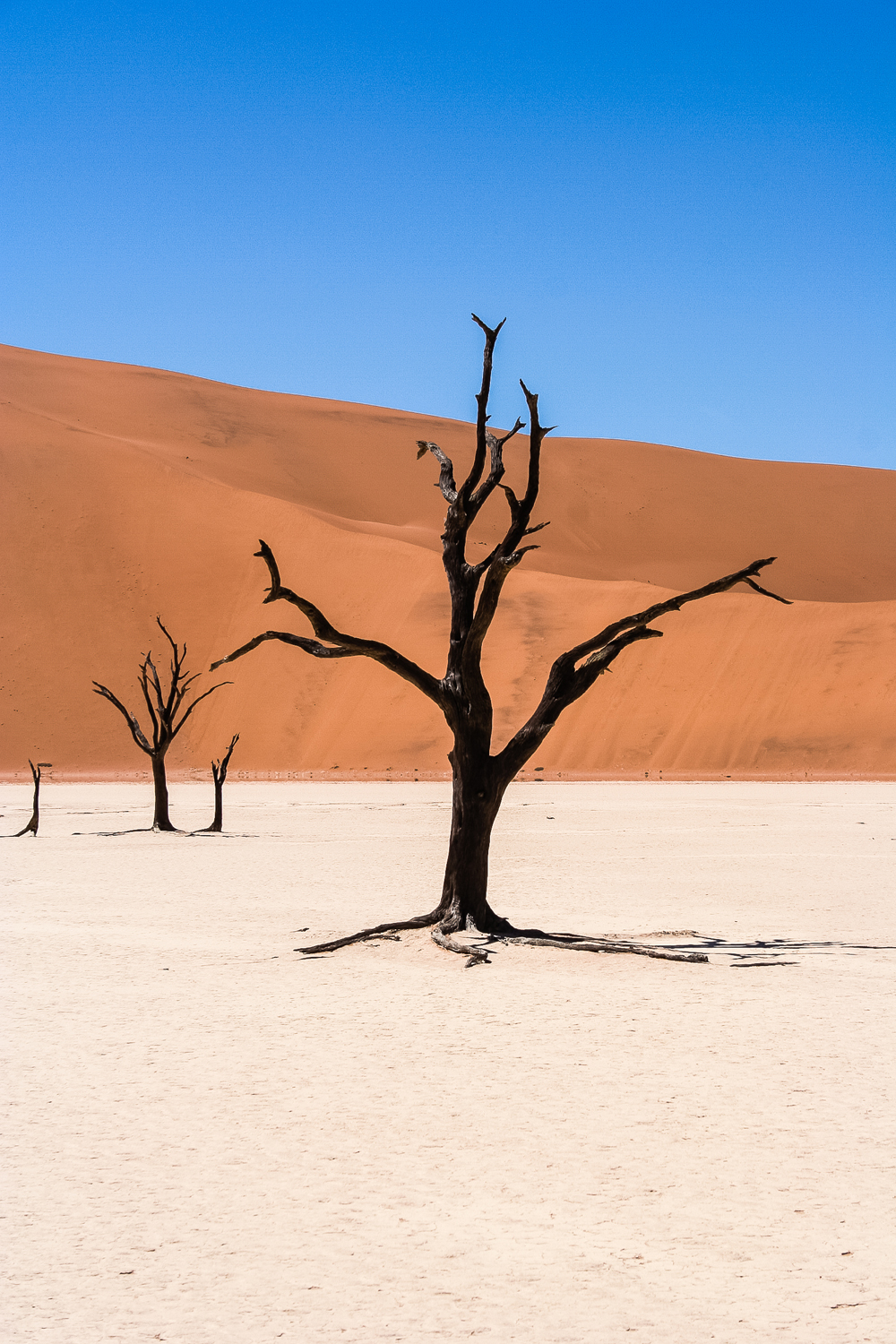 “Drive your foot into the sand. This compacts the ground and will help you keep moving. Otherwise you will slide two steps back for every one step taken!” My guide uttered these words of wisdom at the beginning of our trek up “Big Daddy” in Namibia’s Sossusvlei. Home to some of the highest sand dunes on earth, Sossusvlei is a photographer’s dream. Iconic shots include the petrified camel thorn trees on Deadvlei, their trunks silhouetted against blue sky, red dune and white, saltpan earth. Almost 1,000 years old, these trees have survived decomposition due to the dry climate. The best part of this particular trek is the way down, a 45-degree incline of shifting sand. I suggest taking it at a run and adding a somersault when speed gets the better of balance … 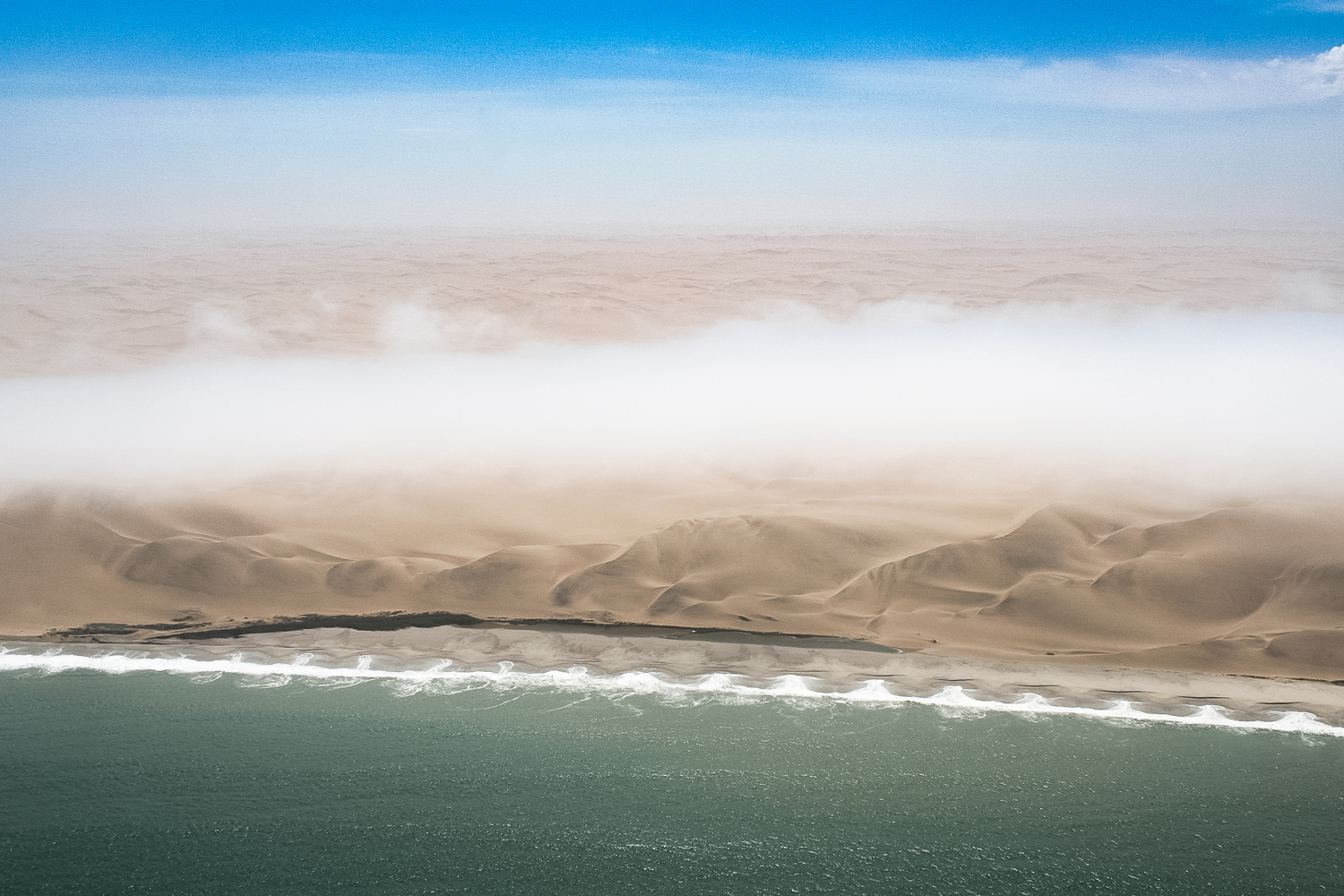 An aerial view of the Skeleton Coast

One of the best ways to experience Namibia’s stark beauty is from the air. Scenic flights operate throughout the country and ones along the Skeleton Coast are highly recommended. Arid, hot dunes roll into the cold Atlantic Ocean. Earth meets water in one of nature’s fiercest contrasts. Pictures like this show me the power of landscape, highlighting the vast emptiness that draws me to this country. 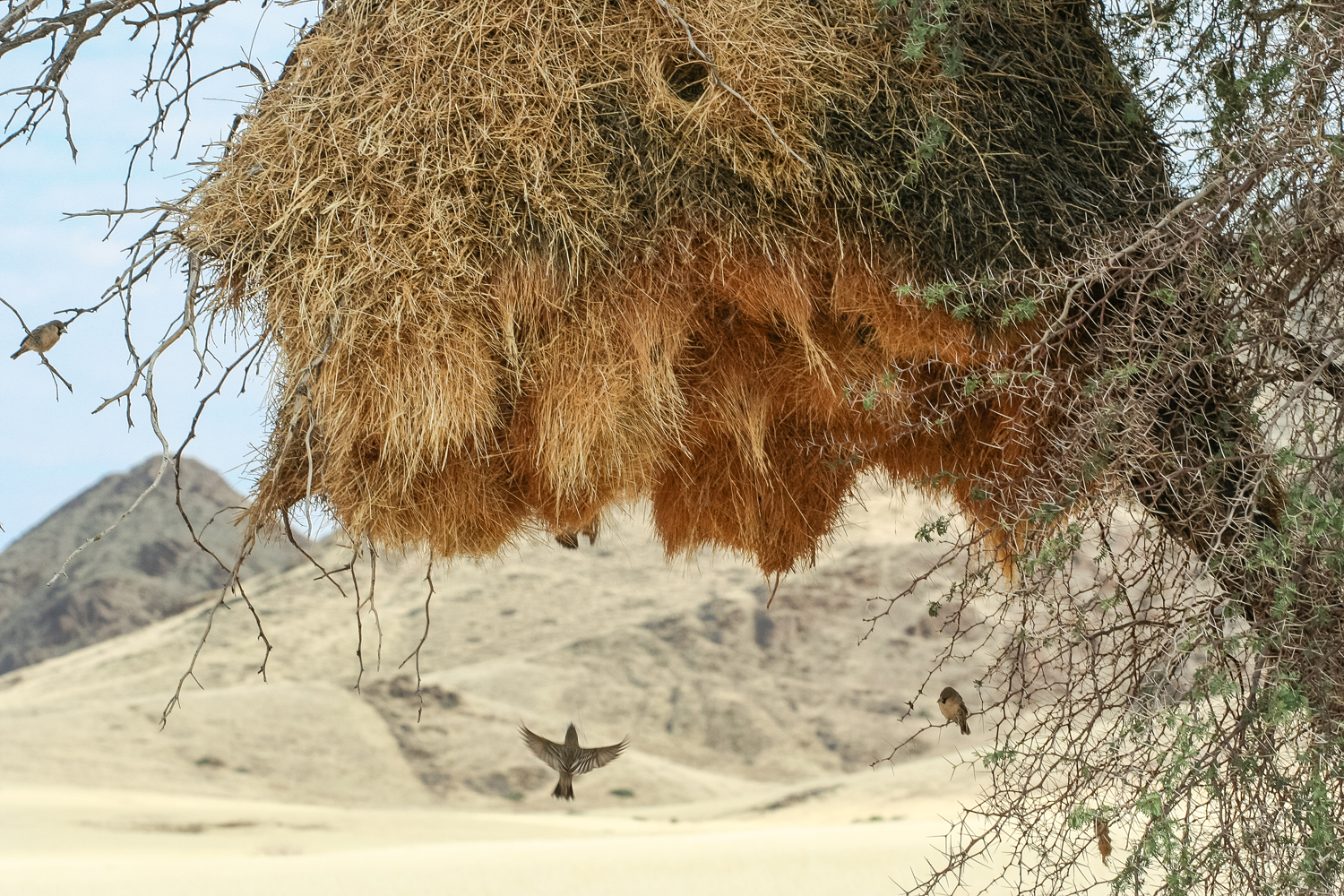 A sociable weaver nest in the Namib-Naukluft National Park

“It’s a strangely shaped tree. No, wait, it’s an animal in a tree. No, wait, it’s … What is that?” This was my reaction the first time I came across a sociable weaver’s nest. Composed of grass with numerous entry/exit holes, these nests can house weaver colonies numbering in the hundreds. The many holes are part of a security system against snakes. If a snake manages to gain entry, birds inside have multiple escape routes. The best way to spend an afternoon siesta is to lie under the nest and wait for a little bird’s head to peep out. Sadly human reflexes are never quick enough to capture the shot! 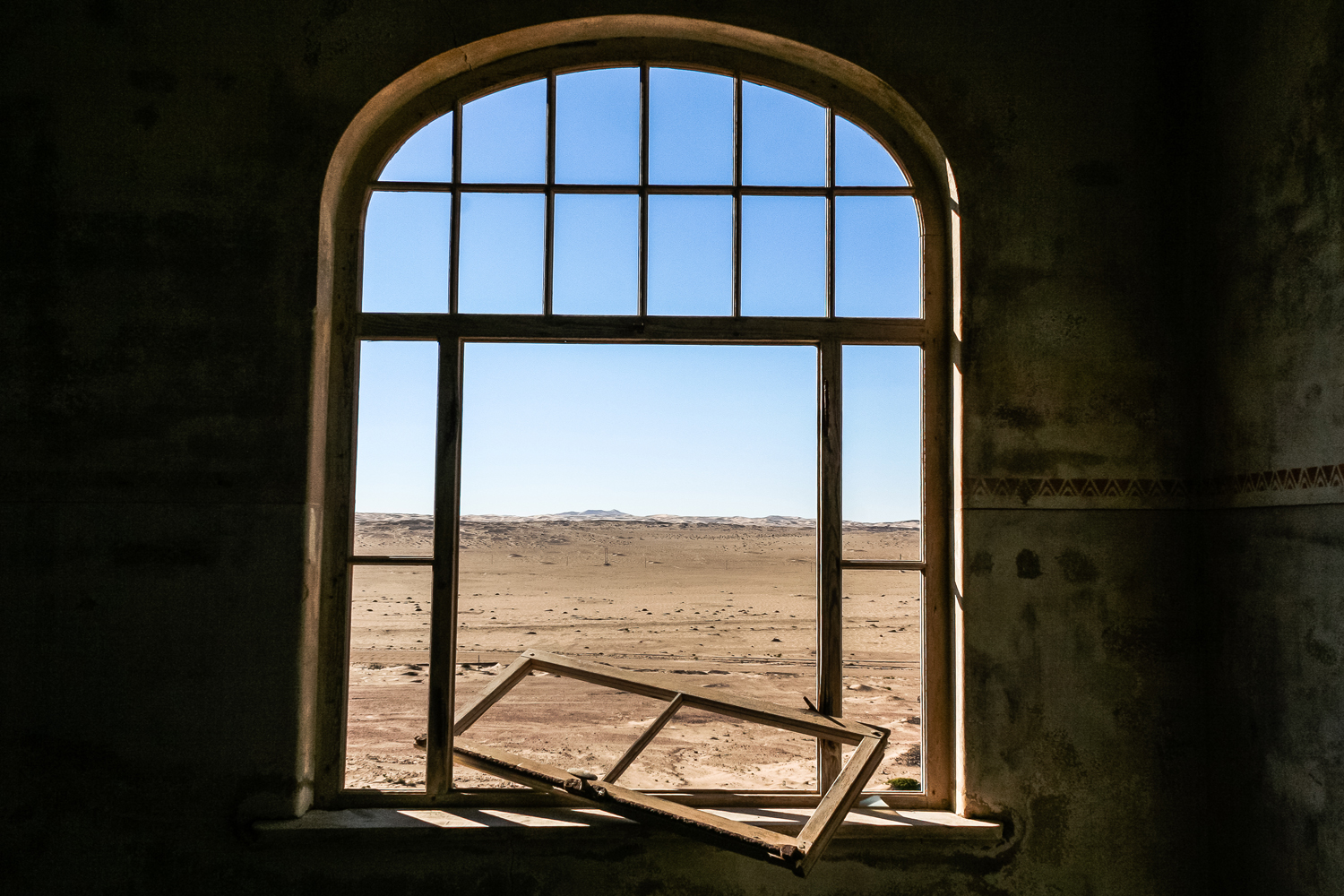 Kolmanskop’s houses are a part of the surrounding desert

The “ghost town” of Kolmanskop is a protected historical site and a stark reminder of how German settlers adapted to alien conditions. Kolmanskop was founded by diamond miners in the early 1900s, reached its pinnacle in the 1920s and was abandoned when diamond prices crashed. Buildings that witnessed fortunes found and lost are slowly sinking into the sand. I obtained a special permit and visited just after sunrise. Wandering through empty houses whose windows looked onto a great expanse of nothingness was eerie. It made me realize just what these people endured in their quest for a different life.

What I learned about indigenous tourism in Namibia