SITTING CROSS-LEGGED on the carpet beside a smiling senior monk, I take photos of him and others as they chant deeply during their early morning puja ceremony, high in the Himalayas of Nepal.

Each time I take a photo of the monk, he leans over to see his image on the screen and grins cheekily, all the while continuing his chant, never breaking the spell.

Right up close to the Tibetan border in the Tsum Valley, after sharing breakfast and conversation with the five old yet energised guardian monks of Mu Gompa, I feel surprisingly at home. These are experiences I will treasure for a long time to come.

Nepal has captured my heart, and now that I’ve moved away, it continues to call me back. The landscapes, the culture and the smiling faces are just a few reasons to love this country. Let me show you some of the others. 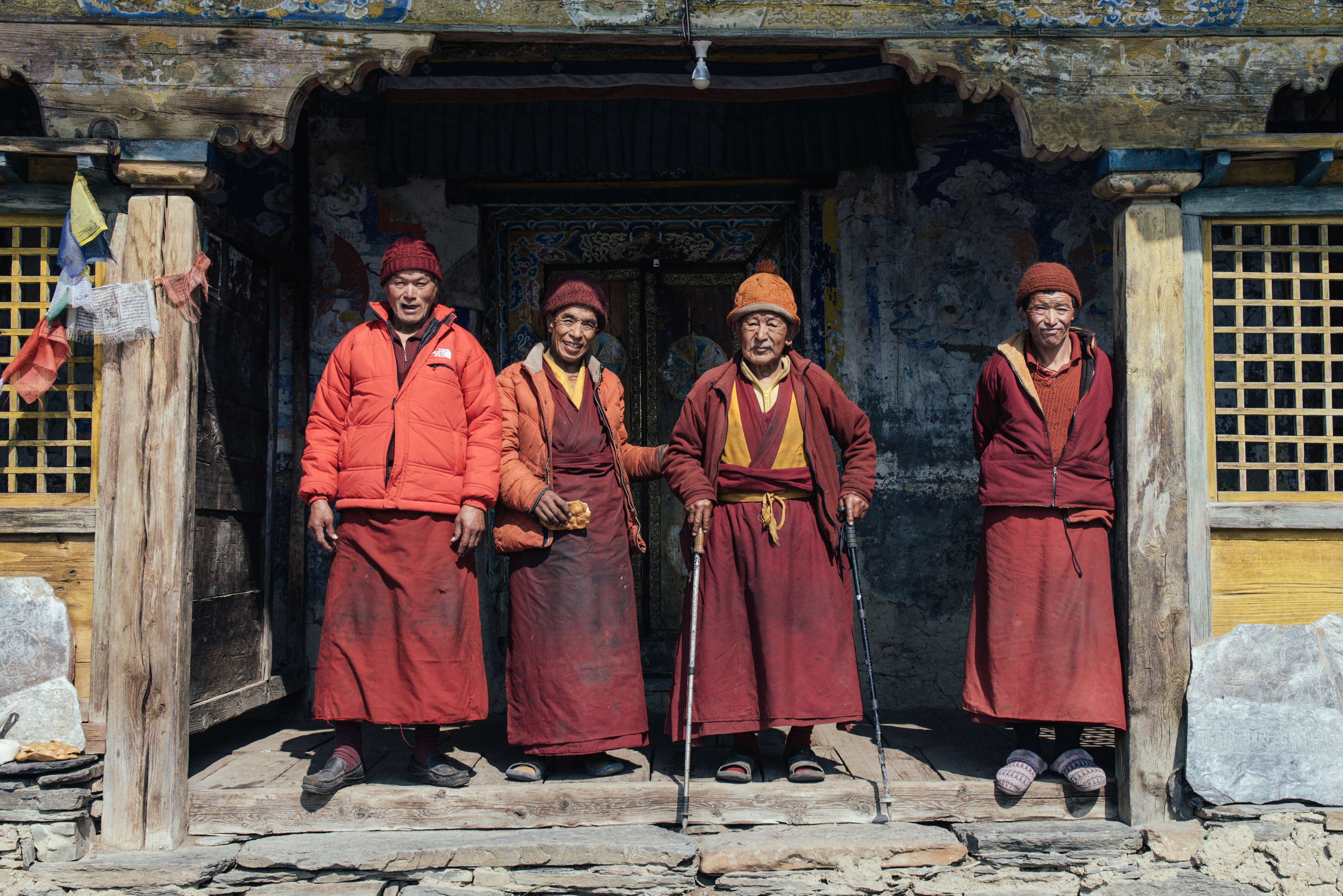 When I arrived in Nepal in mid 2015 I bought an old motorbike and began to explore. Evidence of the earthquakes that devastated the country three months earlier was everywhere. One of the places I visited, Mu Gompa, a Tibetan buddhist monastery high in the Himalayas, had sent all of it’s novice monks to Kathmandu to study until the monastery was properly repaired. Remaining behind to look after the monastery were five wise, yet lively old monks – including the monk who laughed at his photos during the morning puja, seen here on the left. 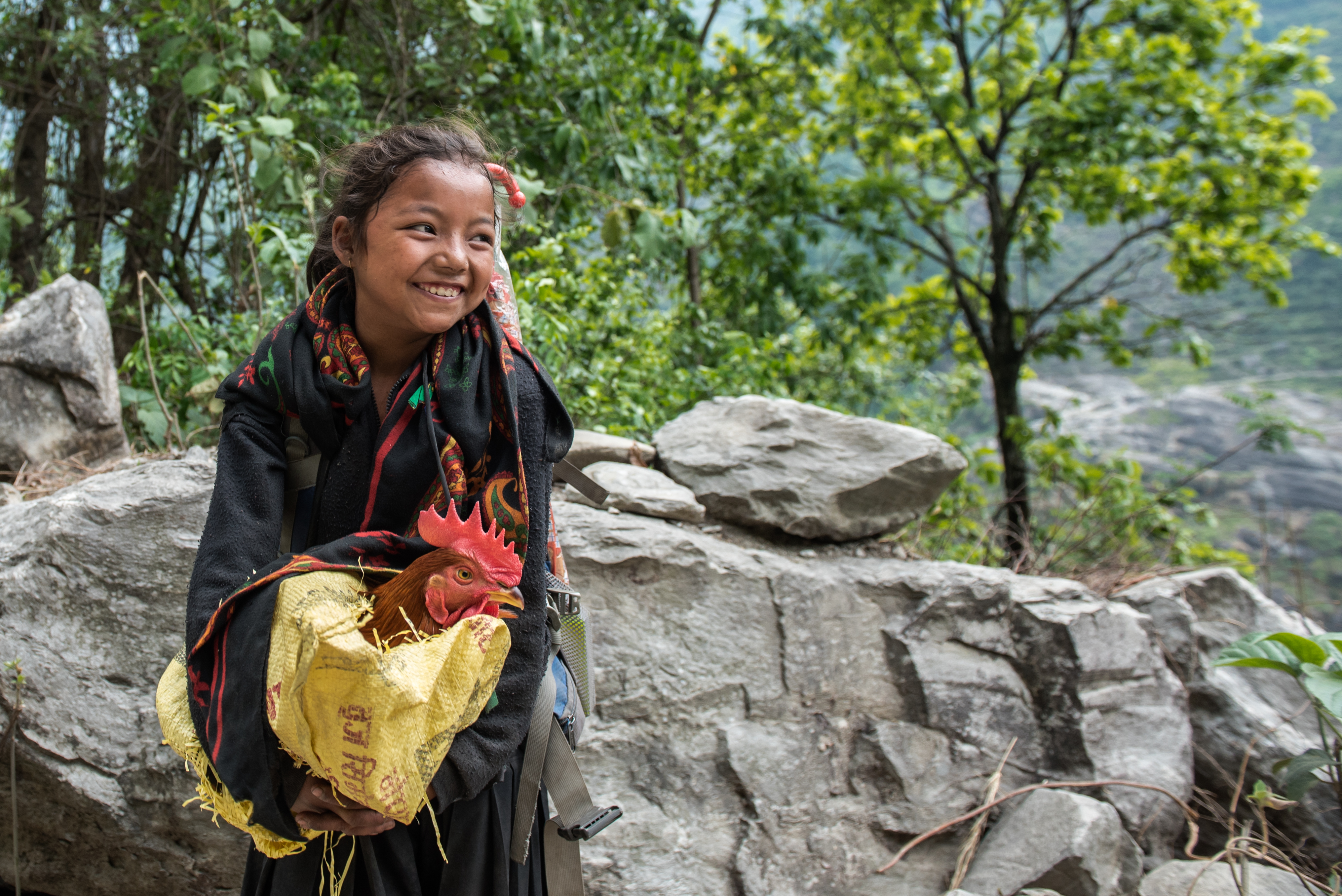 A young girl laughs as she carries her rooster up the trail – Gorkha Region.

I think the thing that visitors remember the most about Nepal, is the people. At least that’s how it is for me. The smiles, the jokes, the Namastes! Here, a nine-year-old girl carries her family’s rooster and a pink umbrella as she walks with her father and younger brother along a riverside trail in the Gorkha region. Slightly nervous of the camera she exchanges laughter with her father as he carries an impressive load up the trail below. 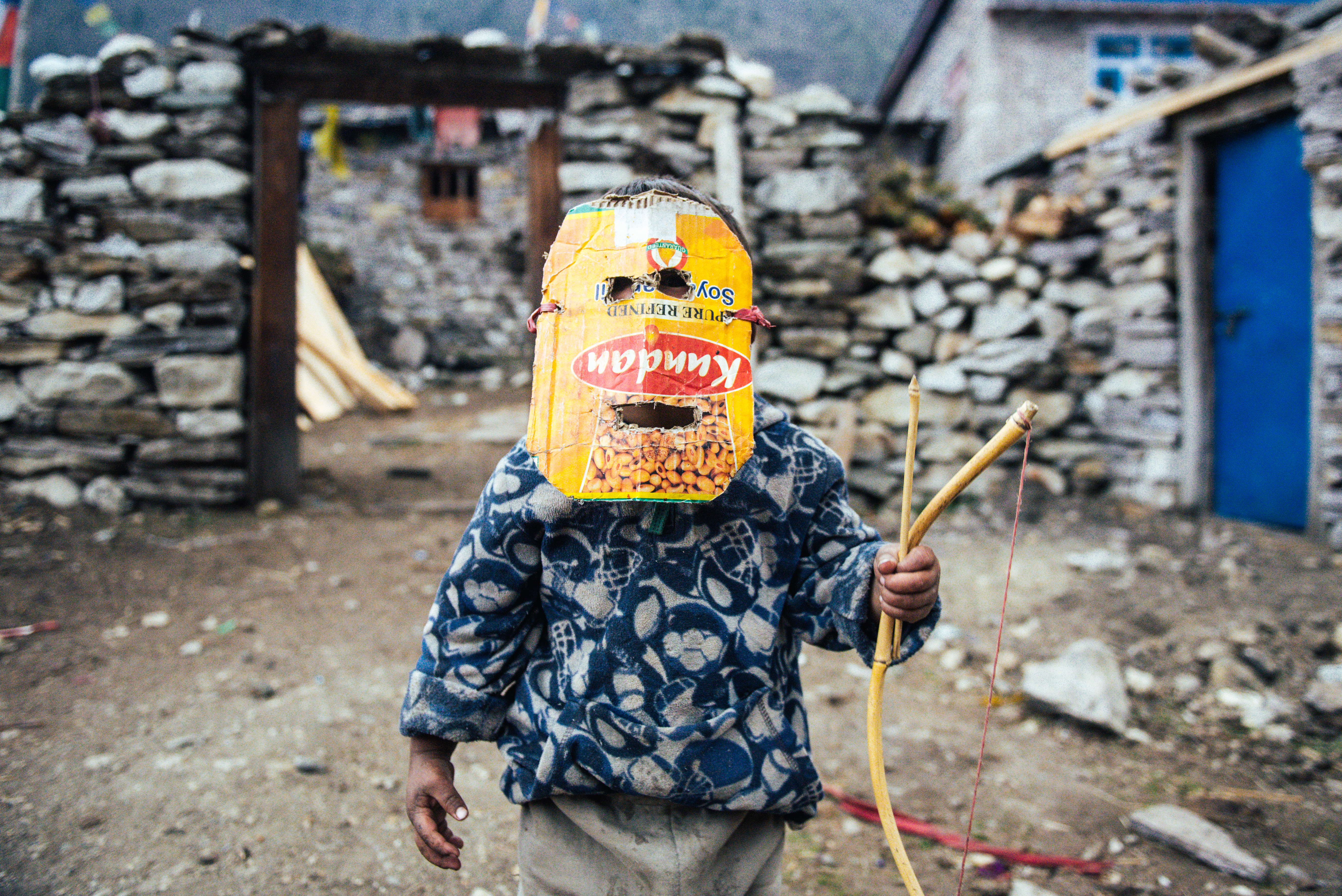 A young boy poses with bow and arrow – Samagaon Village.

Some of the people I met could appear a little fierce at first, but once we exchanged greetings and shared a laugh, their kind hearts would quickly be revealed. The strap on this young boy’s mask broke not long after this shot was taken, resulting in some frustrated tears. A hasty repair, a smile reinstated, and we were invited into his family’s house for tea – a salty hot tea made with yak butter and tea leaves. 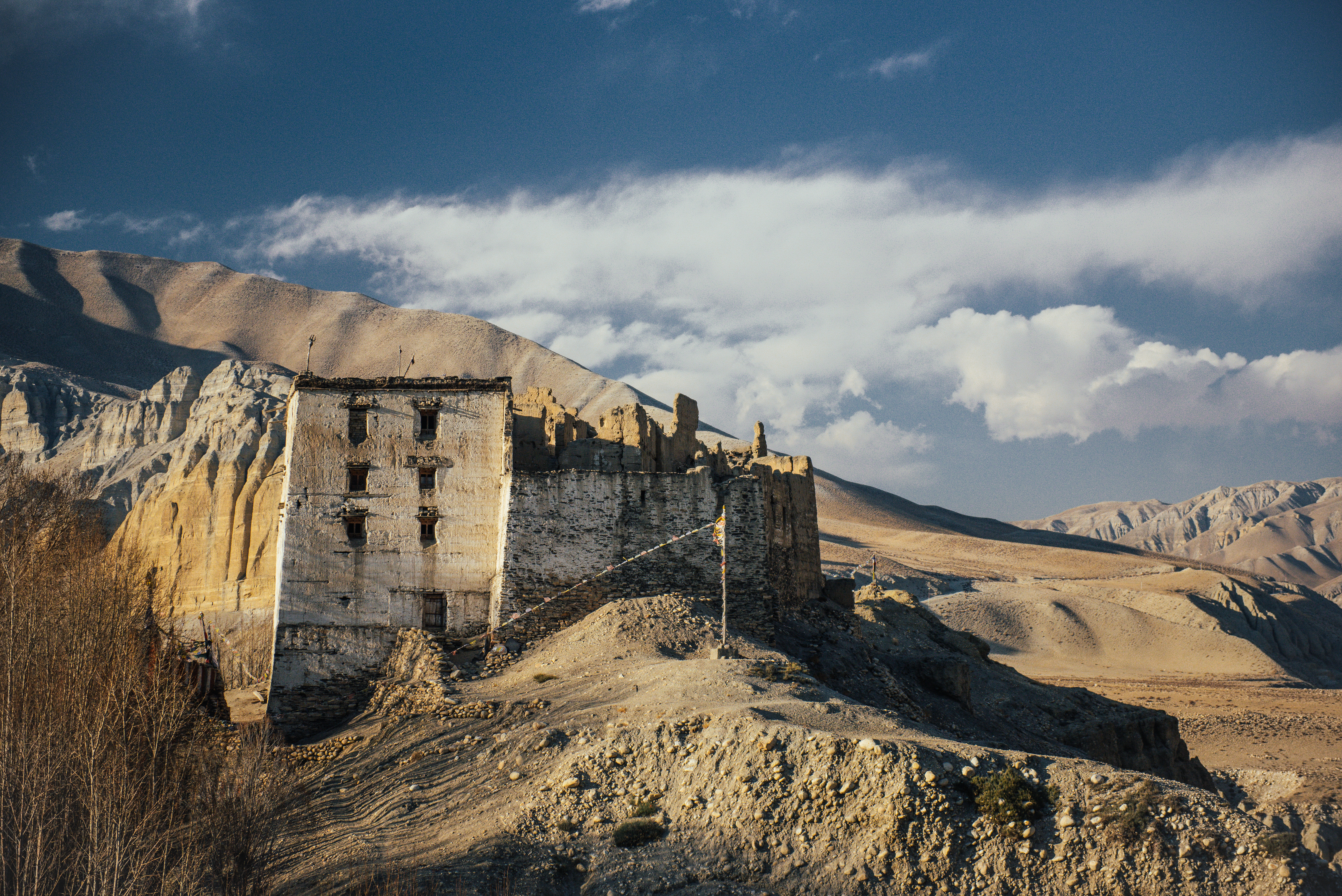 The Upper Mustang region, or Kingdom of Lo, was only opened for trekking in 1992 and the landscape there takes the breath away. A high mountain desert, the valley sits in a cleft between some of the highest peaks in the world, yet receives almost no rain and snow. Here, the old Lo palace in Tsarang stands in the evening sun, blending into the landscape beyond. The golden morning and evening light of such a high altitude, culturally rich environment makes for a photographer’s paradise. 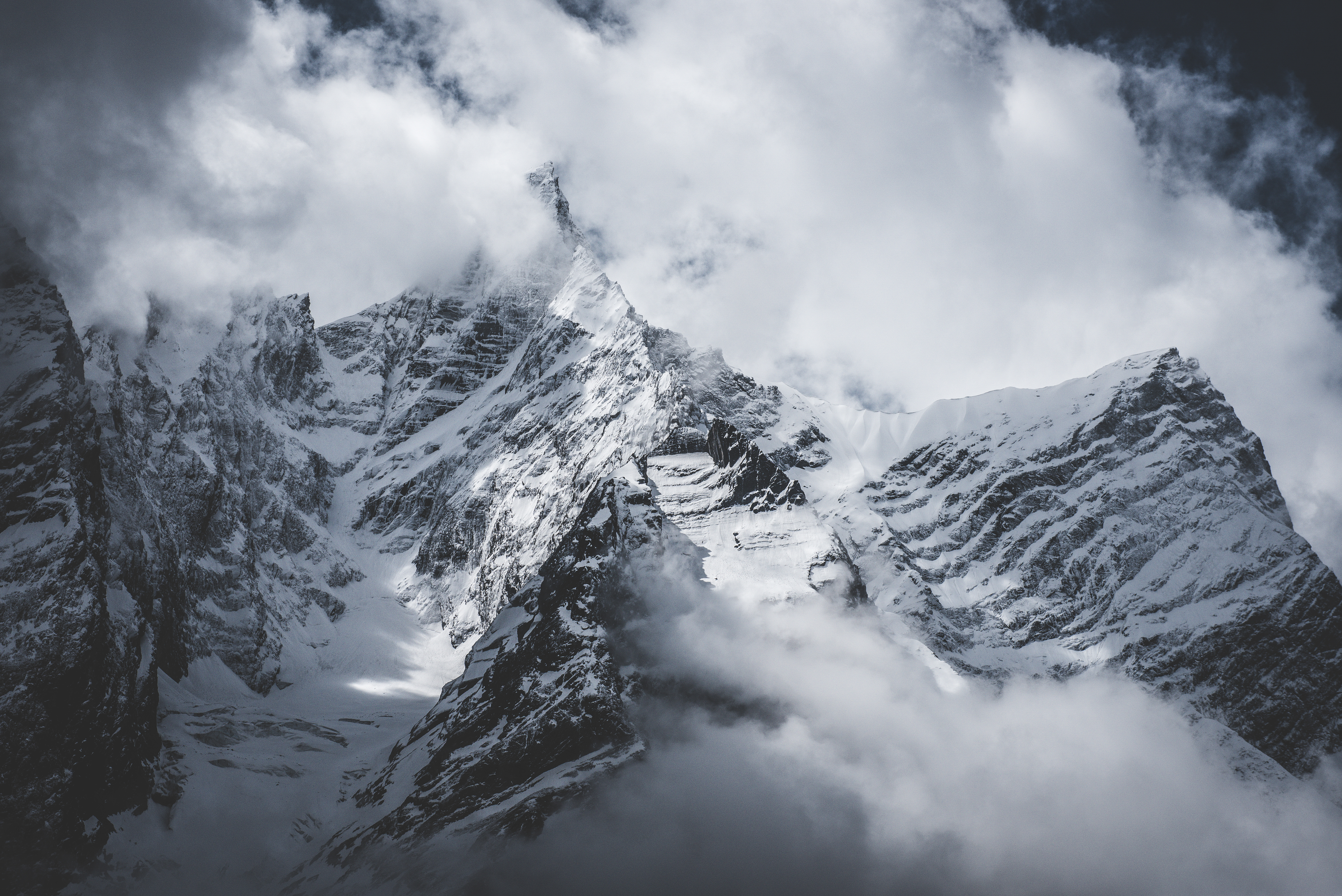 Epic mountain views are one of the highlights of trekking in Nepal and while the best photos are usually had on clear sunny days, sometimes snow clouds can add a little extra grandeur to the already awe-inspiring peaks. This shot was taken just after dawn below the Larke Pass (5,106m/16,752 ft) on the Manaslu Circuit. After we crossed the pass we met the expedition manager of the Dutch Marines attempt to summit Manaslu (the 8th highest mountain in the world), who told us that if we’d loved what we’d just done, we should definitely look to cross from the Upper Mustang to the Nar Phu Valley north of the Annapurna circuit, via the 6000m+ Saribung Pass. 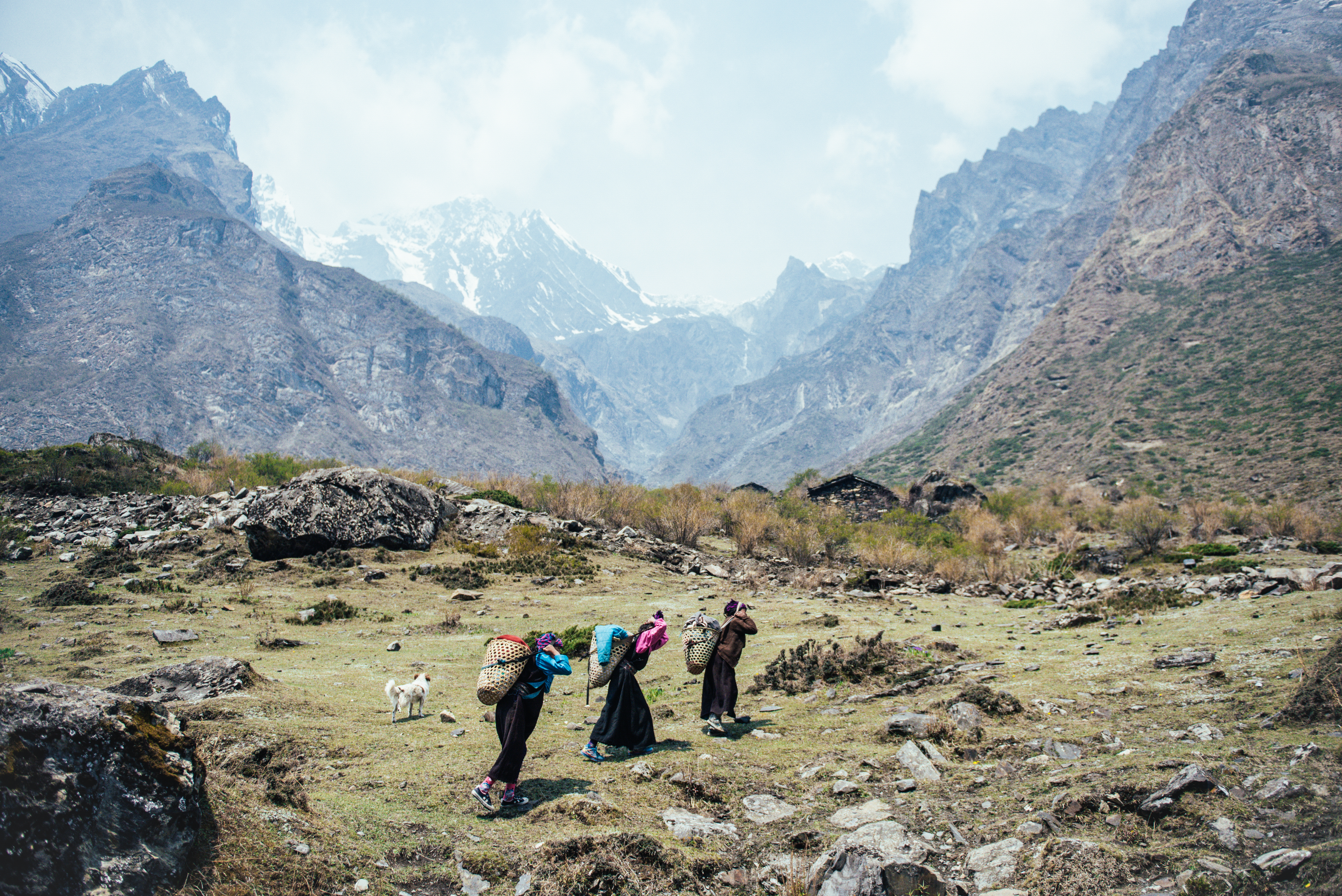 Mother, daughters and their three-legged dog head to the Yarsagumba harvest – Tsum Valley.

A mother and her two daughters, accompanied by their energetic three-legged dog, head to the Yarsagumba harvest, doko (baskets) packed high with all the supplies they need for two months at high elevation. During May and June, many mountain-dwelling Nepalis head to higher elevations, often between 4000-5000m (13000-16000ft) to search for Yarsagumba, a bizarre combination of worm and fungus that can fetch up to $25,000 USD/kilo on the Chinese market. The fungus germinates inside the living worm, killing it, and then a stalk-like fruiting body emerges from the corpse. Revered in Chinese medicine for its ability to cure many ills and apparently increase libido, the resulting plant/fungus is highly valuable. During this May/June harvest period, most able-bodied people will head high into the mountains as part of the gold rush, leaving schools closed and only the very young and very old to look after the villages and livestock. 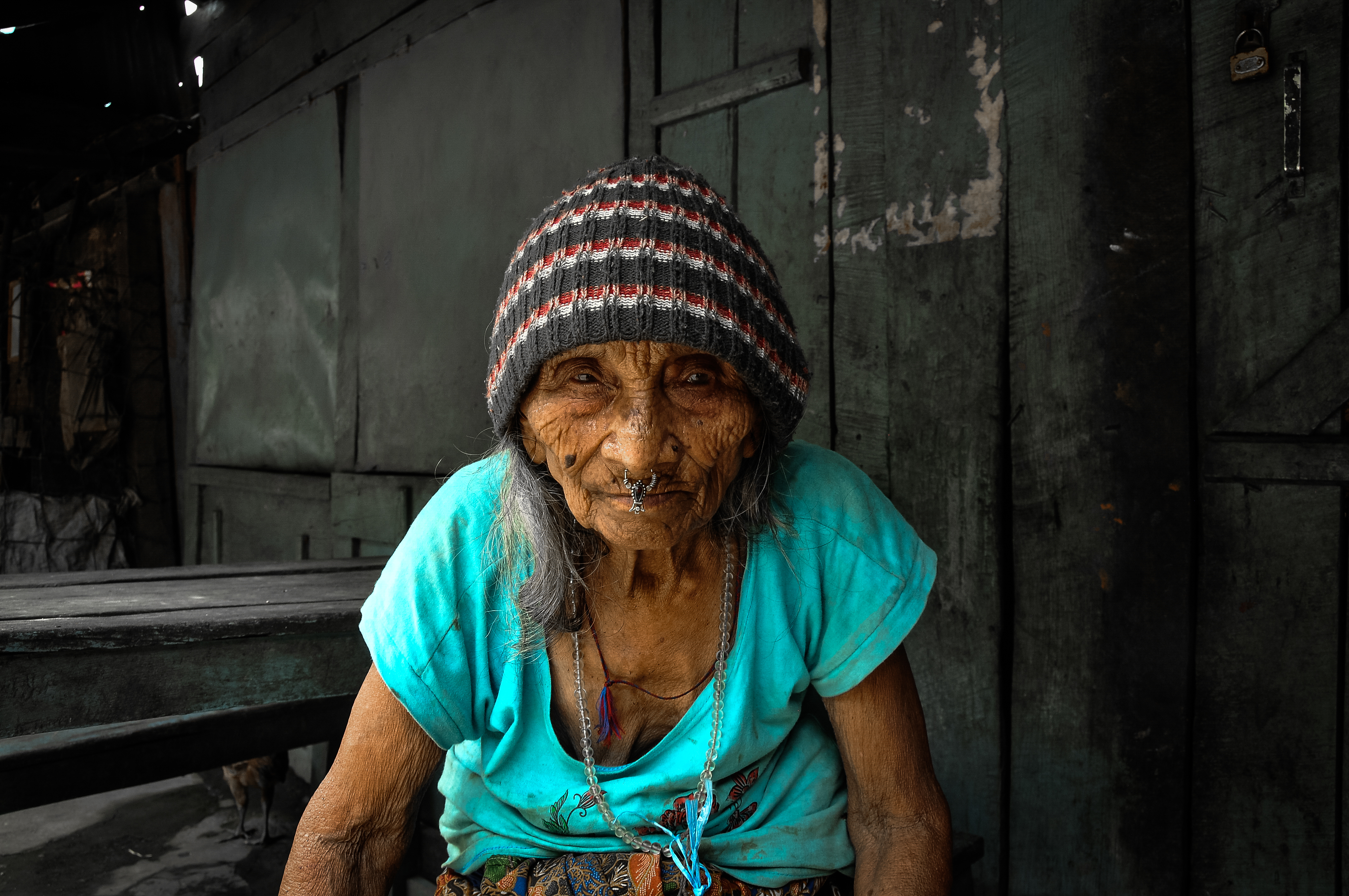 An old woman poses quietly for her photo – Fishling.

I met this beautiful old woman at a roadside stop between Kathmandu and Pokhara. She took her job of being photographed very seriously but was all smiles and laughter while talking with us before and after. She wears a nose ring, a traditional adornment to indicate marriage for women of her region. I didn’t ask how old she was but I’m certain she’s seen some dramatic change in Nepal over the course of her life. Her warm presence and the lines of her story etched on her face will stick in my mind for a long time to come. 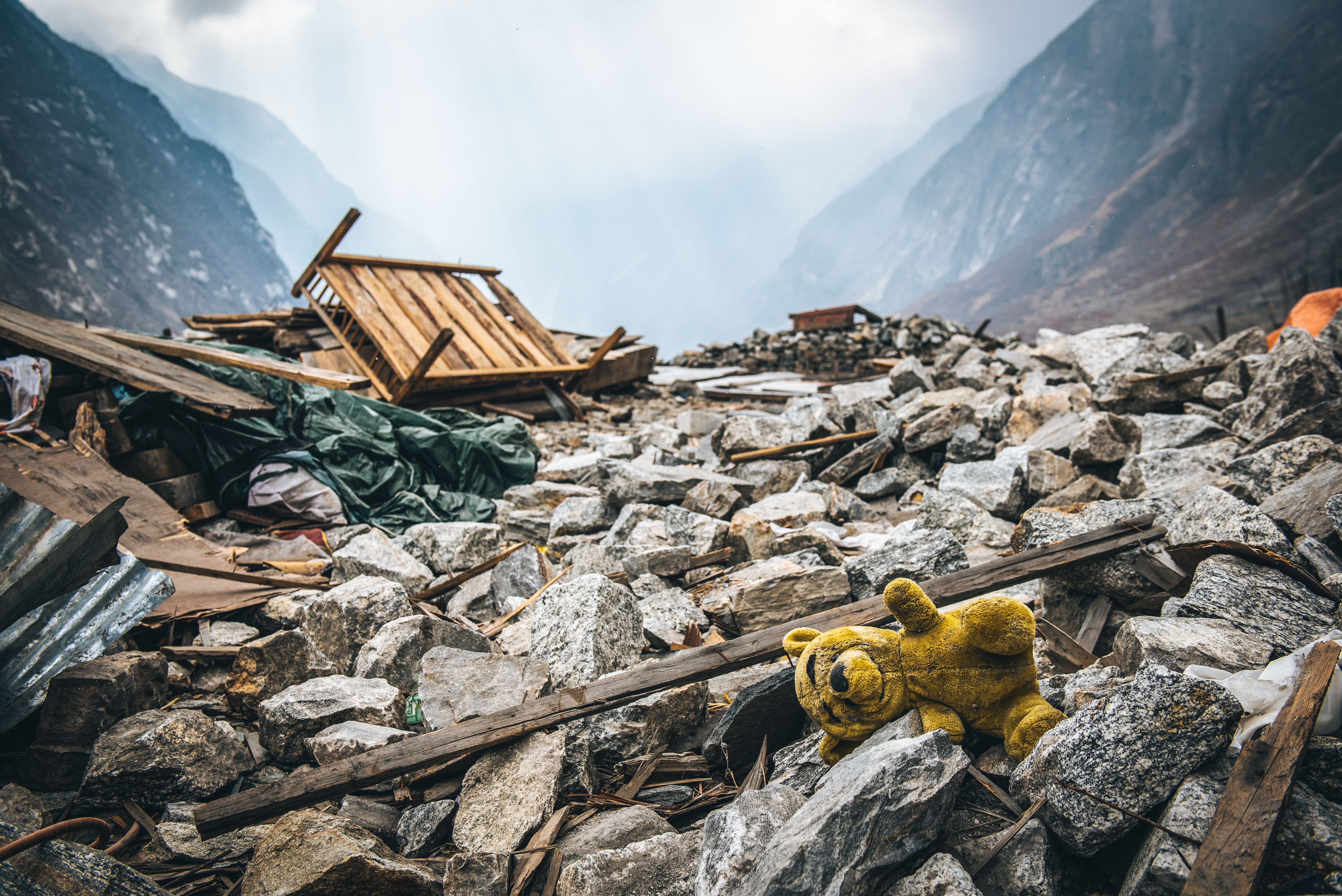 It’s impossible to talk about my time in Nepal without mentioning the earthquake at least a few times. The destruction was truly devastating to see but watching the Nepali people pick themselves back up and begin the rebuilding, despite the government’s gross ineffectiveness, was an amazing thing to witness. As we trekked into remote regions it was very common to see a teahouse or school being rebuilt, often with the help of an aid organisation and almost always after materials had been carried in for many days by local porters. This shot was taken at a small hamlet just above Langtang Village, which was tragically and entirely destroyed by a landslide. 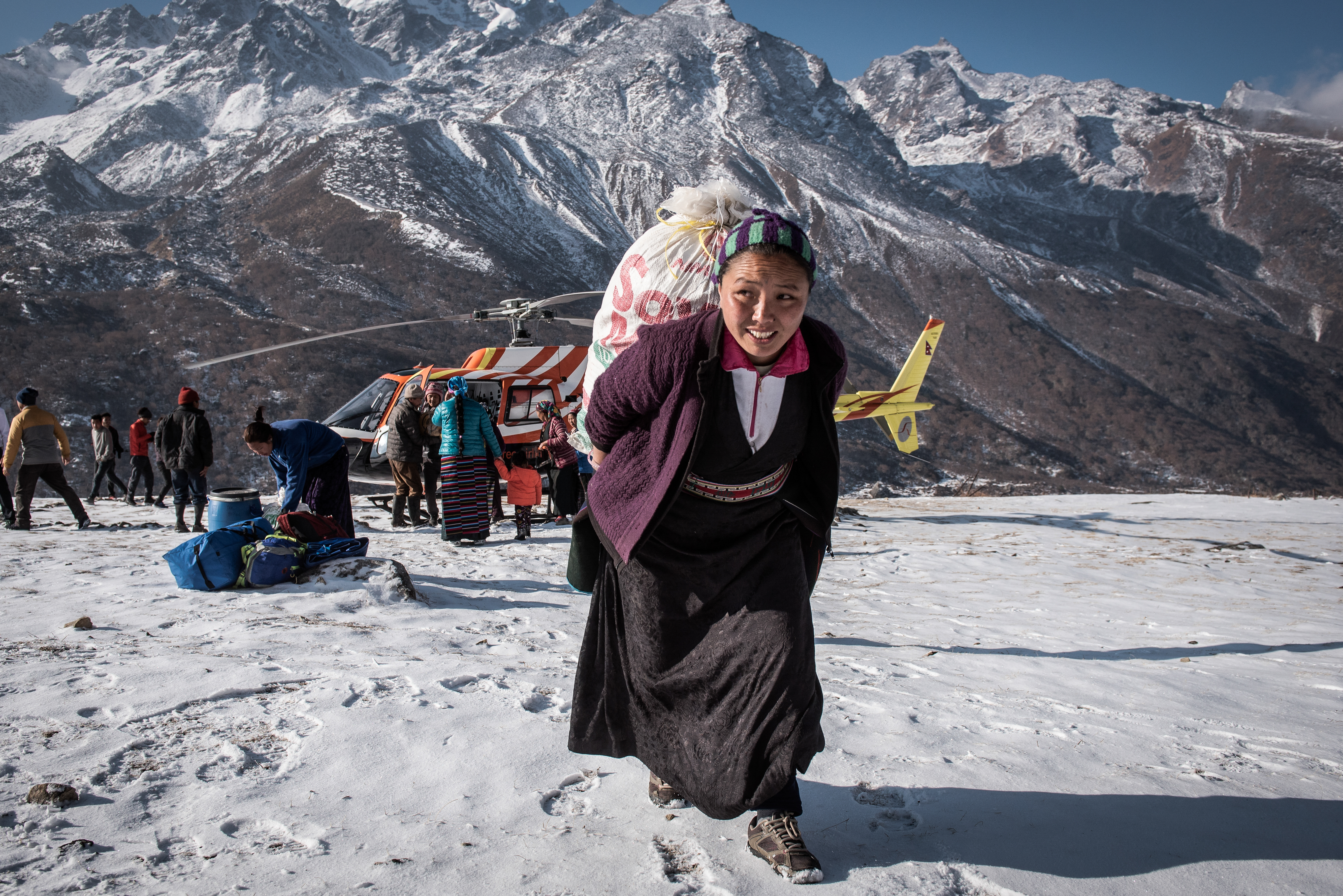 A local woman unloads supplies from a helicopter – Kyanjin Gompa.

For the most remote of communities, aid organisations and local people would often find it easier and more efficient to fly in supplies by helicopter. Here a woman from Kyanjin Gompa village carries a sack of supplies from an early morning helicopter arrival. We witnessed the arrival of helicopters in several different locations and it always caused excitement in the village, people would hear the rotor noise, quickly grab a doko or carry strap and run to the landing site to help unload. It was also much more common than I expected to see trekkers with altitude sickness being taken back to Kathmandu on the return flight. 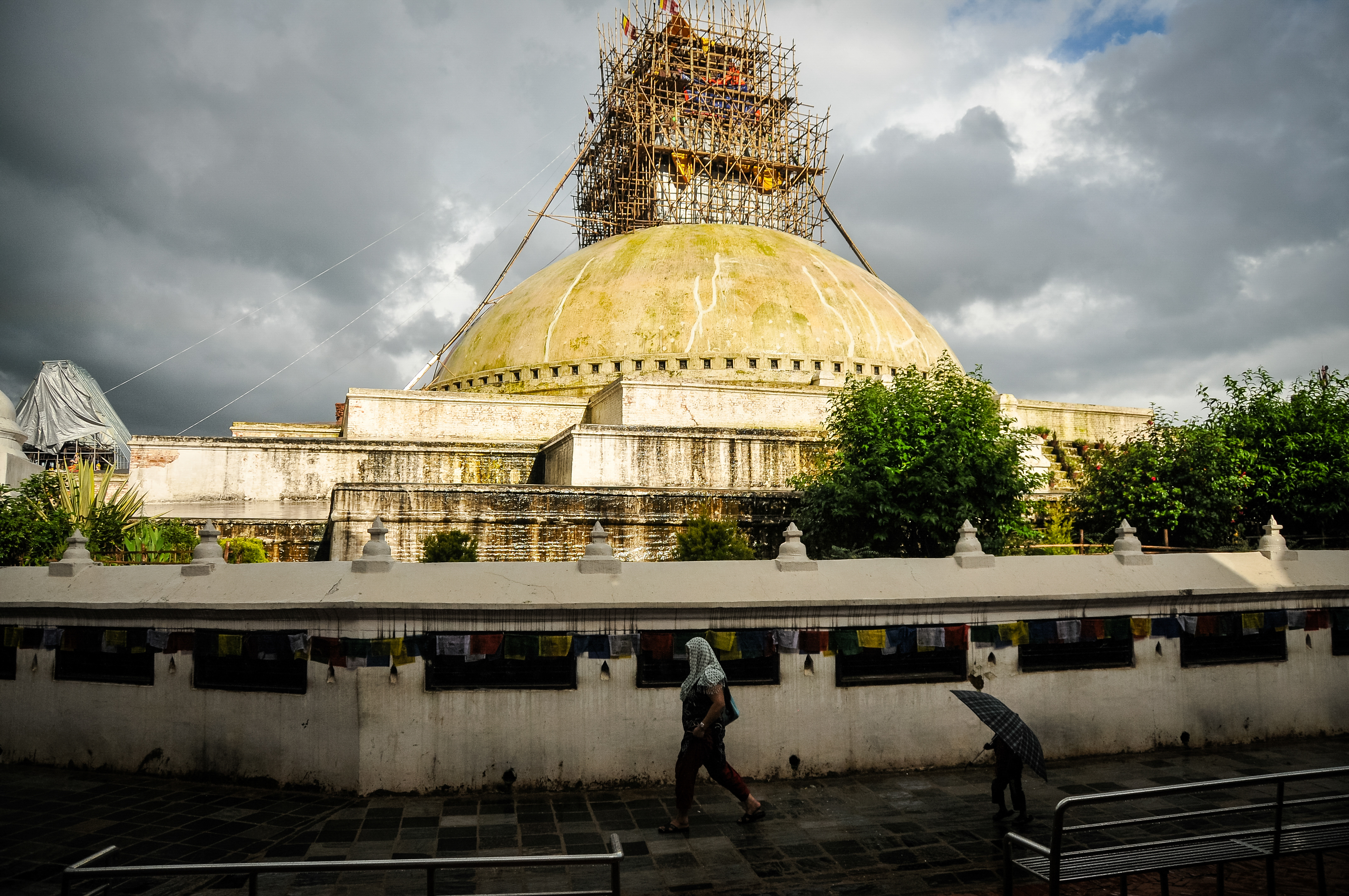 Boudhanath is my favourite part of Kathmandu, home to a large community of Tibetan refugees and Tibetan Buddhist monasteries, with the central point being a very large and beautiful stupa. It can be a great place to escape the madness of the Kathmandu streets – horns honking, sellers hawking, and rickshaw bells ringing, from dawn to dusk. The stupa was unfortunately badly damaged by the earthquake, but repairs are well under way and it will hopefully be back to its former glory before too long. This photo was taken as local people do their ‘kora’, a clockwise circumambulation of the stupa said to help accrue merit in this life and those to come. Circle Street cafe, tucked up inside one of the buildings beside the stupa was one of my favourite places to drink coffee and work away on my laptop for the morning. 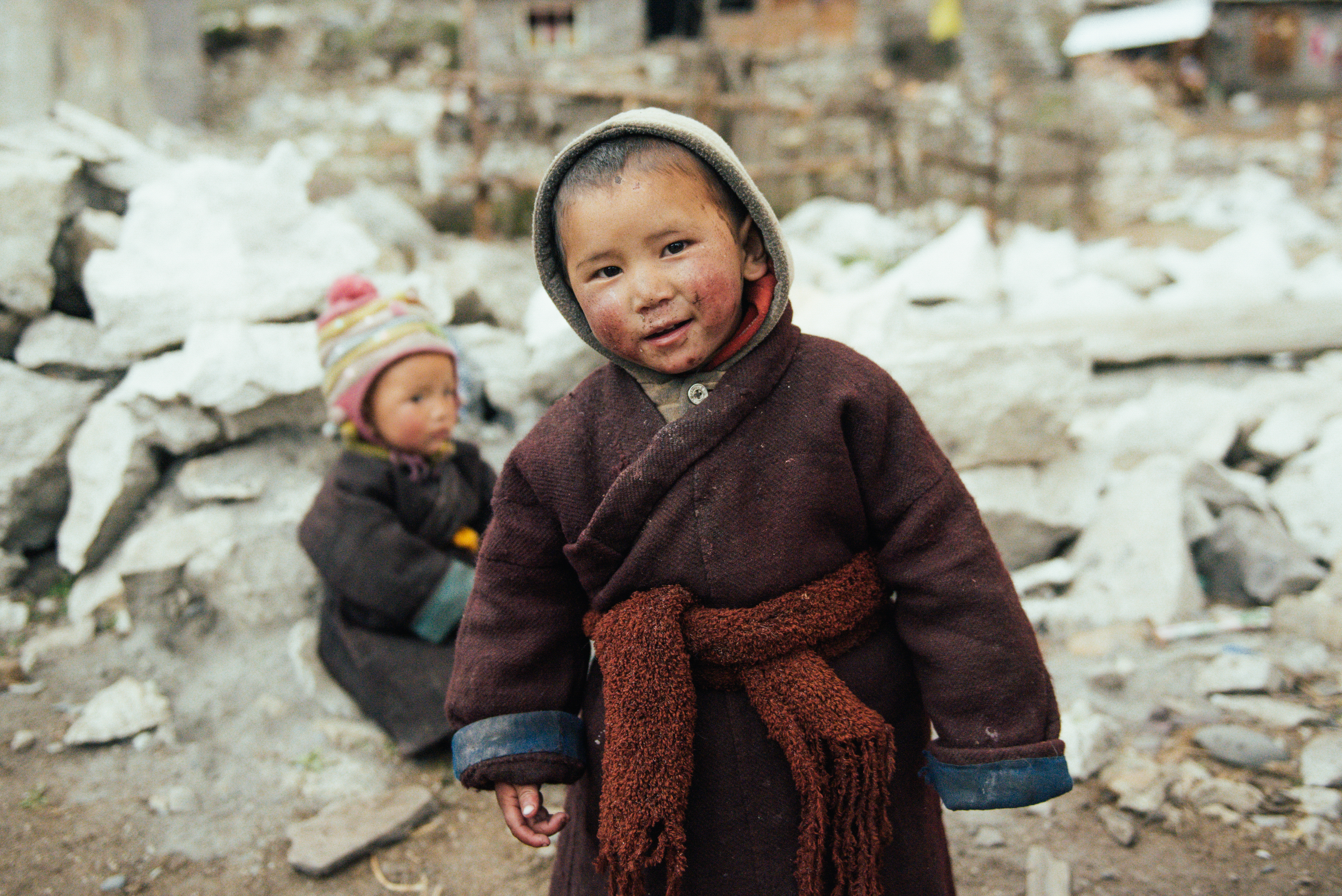 A young boy peers curiously at the camera – Samagaon Village.

This curious little guy was very interested in my camera as I took his photo. Children in Nepal, as everywhere, love to see their photos on the camera’s screen and often try to swipe left or right to see what’s next, just as they would on their parent’s smartphones. The clothing he wears is called a Chuba, a traditional yak wool cloak, designed to help deal with the fiercely cold winters experienced at that altitude. The village where he lives, Samagaon, sits at 3390m (11122ft) above sea level and can easily drop below -20°C/-4°F during winter. 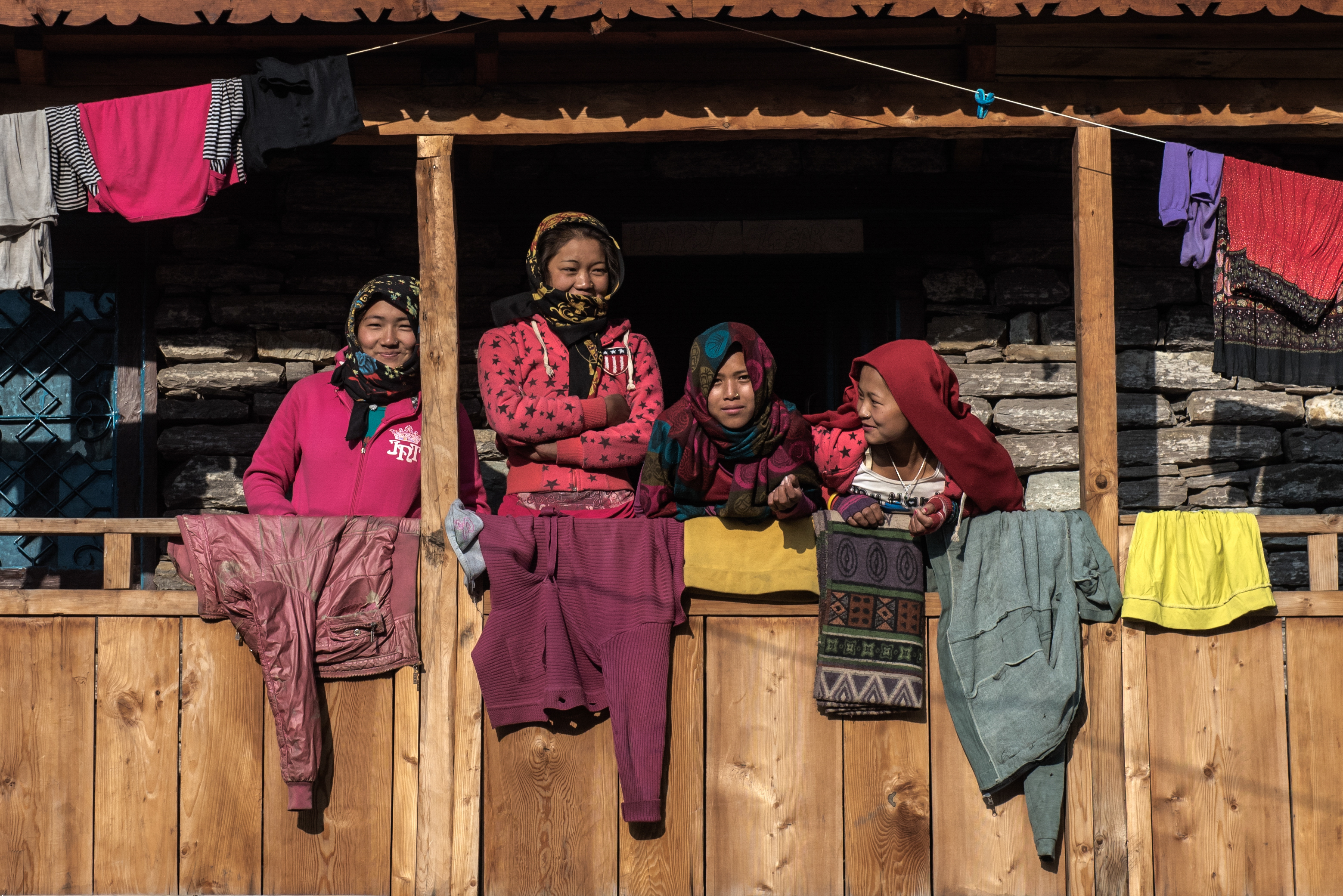 Nepalis will often travel far from home to find work, and stay away from home for long periods before returning with their hard earned rupees. These four young women walked at a similar rate to us for three days of the Manaslu Circuit, searching for labouring work repairing earthquake-damaged houses higher in the valley. Our porters were fascinated by them, but it wasn’t at all clear that the feeling was reciprocated. Here, they look out into the early morning light from their night’s accommodation in the village of Samagaon. 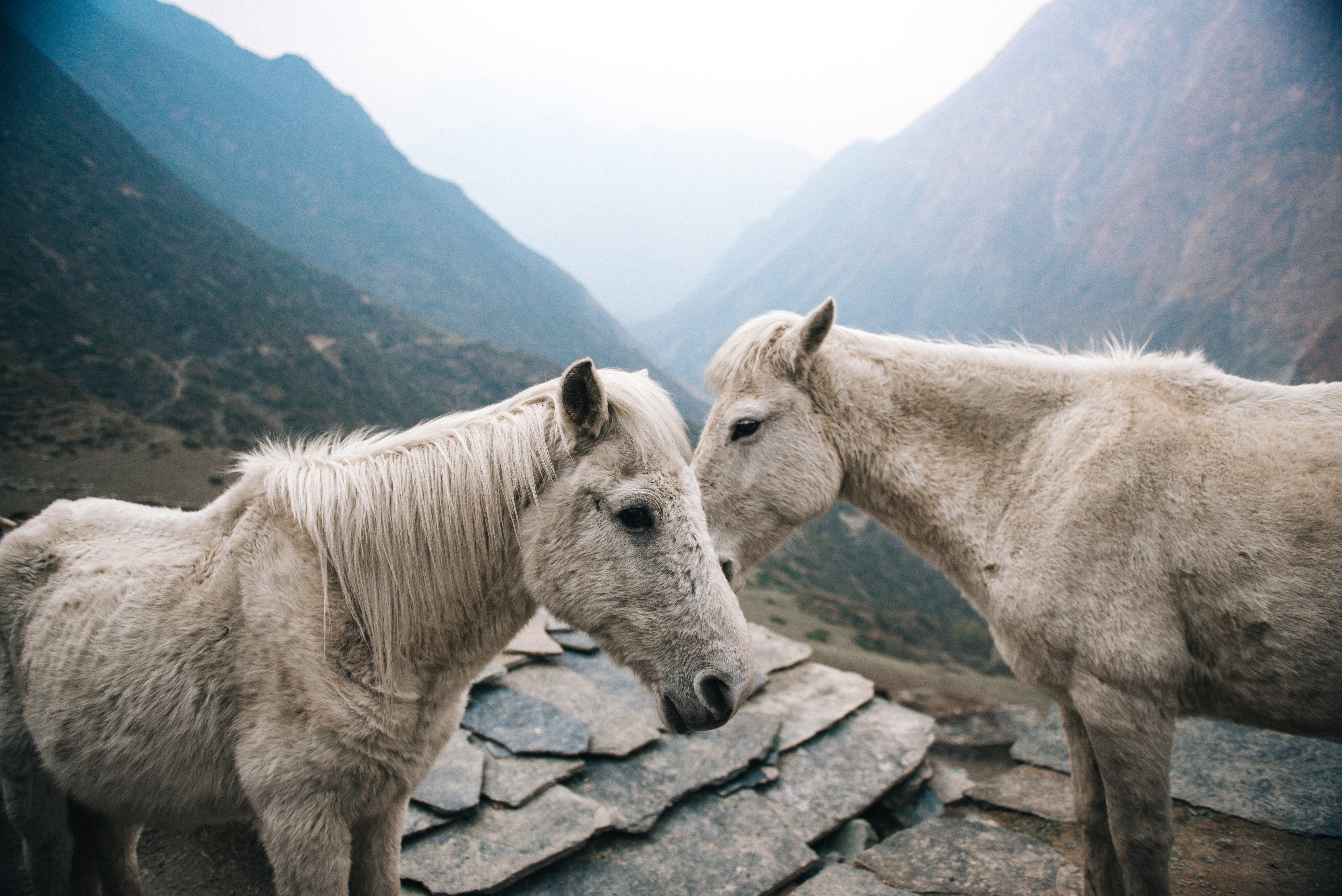 Horses, donkey, yaks, and human porters ply the tracks and pathways of the roadless areas of Nepal, helping to transport impressively large loads of supplies and equipment from one village to the next. It’s common to make way for a train of donkeys and horses, or even more impressive – large, lumbering yaks, as you trek high into the Himalaya. These beautiful white horses were resting outside a monastery in Tsum Valley, clearly hoping the monks inside had something sweet to offer. 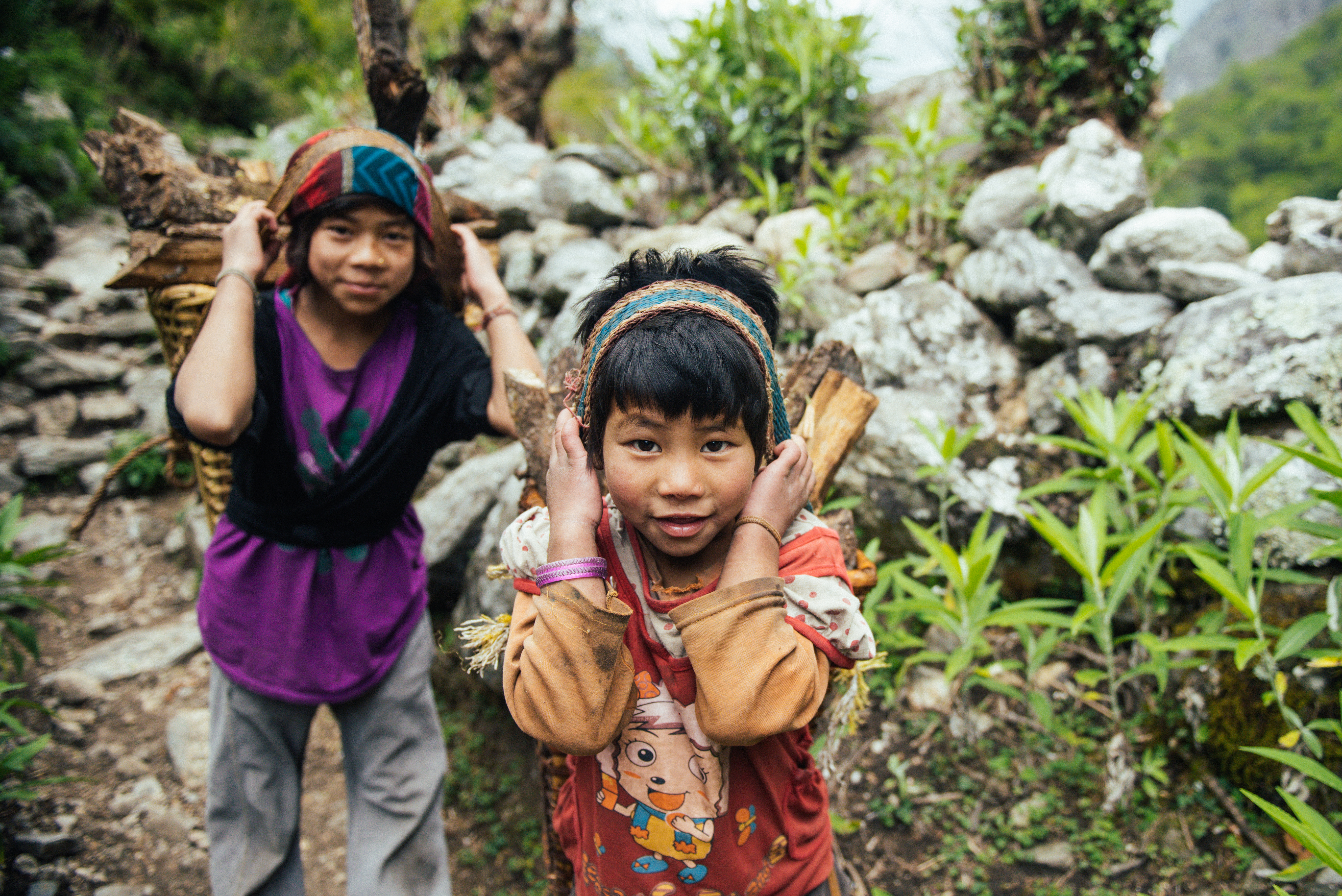 Children stop for a photo while carrying firewood down the trail – Gorkha Region.

Child labour is a real issue in Nepal and children will often be enlisted to help with the family from a young age. These children carry firewood back to their village in the Gorkha region. They seem happy with the work, but it also means they are rarely in school. “Namaste chocolate” was a common expression to hear on the trekking trail, with young kids popping their heads up over stone walls in the hopes of scoring some melted chocolate from the trekkers passing through. Laughing and playing with children on the trail and teaching them to use my camera made for endless highlights. 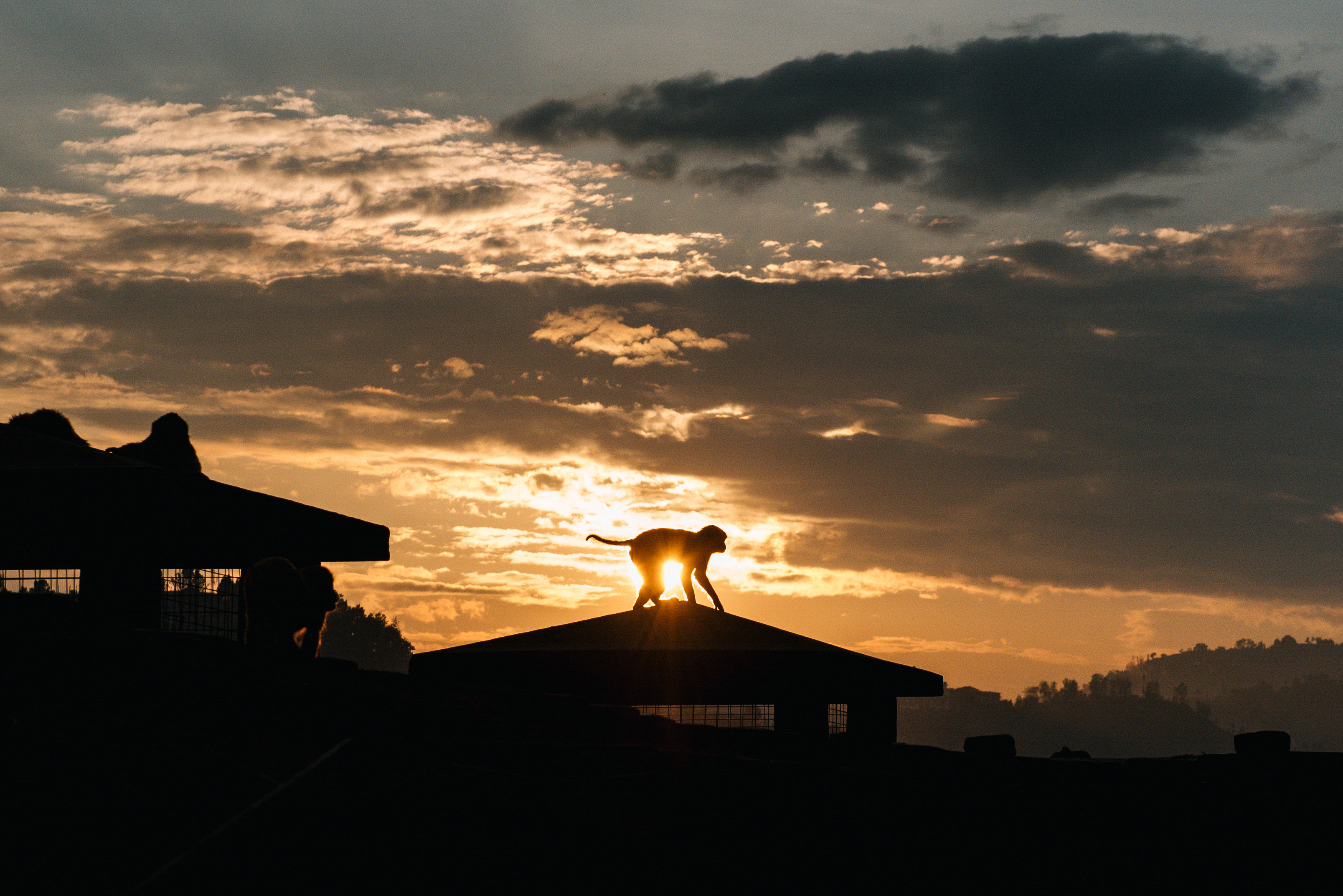 A monkey walks through the sunset at Swayambhunath – Kathmandu.

The monkey temple or Swayambhunath is one of the most iconic sites in Kathmandu. Perched on a small hill to the west of the city it holds a commanding view over the Kathmandu valley. In the evenings it is often awash with golden light, especially after the rain, and it’s a great place to watch the sunset. Monkeys are of course everywhere, young and old, although most are quite relaxed and much less aggressive than their counterparts at other temples. The call to return to Nepal is strong, I’m sure I’ll be back for another of these sunsets very soon.

Tagged
Photo + Video + Film Galleries Nepal
What did you think of this story?
Meh
Good
Awesome

14 mind blowing images of night skies from around the world

A photographic journey to Everest Base Camp