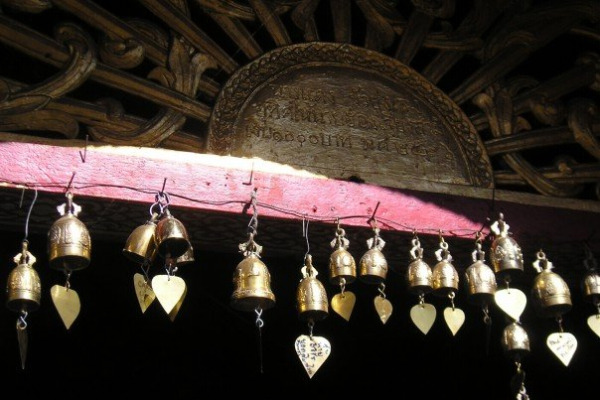 All photos by Anne Merritt

In the weeks before I moved to Thailand for an ESL job, I sank myself into guidebooks, memorized tourist phrases, and tried to piece together the basics from the other side of the world. Tonal language? I thought, sure, I can do that.

It didn’t work at all.

When my new boss met me at the Bangkok airport, I greeted her with a proud “suh-WAT-dee-ka,” pronounced just as my Lonely Planet phrasebook wrote it.

Nada. Her brow furrowed, as if she was reading the syllables that hung awkwardly in the damp air between us. I tried again.

“Hello!” She laughed. It was a gentle, amiable laugh that I would learn to love. “Your Thai sounds so good! Yes, yes, sa-wat-DEE Ka. You’re learning already!” It was the sort of kind white lie you tell praisingly to children.

The answer would come, a pattering of syllables like rain, lost on my ears. I would nod, pretending to understand, and order a plate.

First, there was food

In my first week, word spread quickly that there was a new foreigner in tiny Ayutthaya. Fellow expats, Anglophilic Thais, hair-gelled young men and bored housewives would introduce themselves with a standing invite to grab a bite together. My mind was swimming with culture shock, new names and faces to remember, and of course, the food. The dizzying, wonderful food.

Fruits that I had never seen before became breakfast staples as I gaped my way through the food market each day for juicy rambutan and dragonfruit. The nearby night market became a post-work hangout. I would watch the quick-handed cooks, asking a shy “nee alai?” for every new dish. The answer would come, a pattering of syllables like rain, lost on my ears. I would nod, pretending to understand, and order a plate.

I carried a notebook everywhere, its pages flecked with food stains and warped from constant touch. I scribbled every new food word, and recited them like a nursery rhyme as I walked to work. Glooay, mamuang, tangmoe.

Soon I could order vegetarian food, ice for my soda, less spice, more spice, the check (chek-BIN). I could compliment the cook, thank the waiter, ask for change. I could even have the usual small talk with other diners. “Where are you from? Why are you in Thailand?” 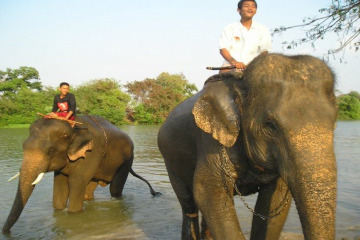 Then, there was slang

My Thai friends were a cheery group studying English at the local university, and we would meet often on the bar street. There, they would feed me everyday Thai words, and I would try to parrot their tones. Their pub talk wasn’t exactly the stuff of a formal language class. My little notebook was filling up with footnotes: * = only use with friends; ** = crass; *** = use only in dire emergencies.

It was a whole new kind of language learning. I had studied French in school, the proper textbook form of a language that you could use politely with a postman or mother-in-law. With Thai, I was learning bits of proper speech and bits of street talk, each section of the language stirring and overlapping in my mind.

At one point, a local man started following me around town in his truck, um, pantsless. I stood up to him by sputtering all the relevant Thai words that came to mind. “I don’t like that! I don’t want that! You terrible man!”

Later, I reenacted the confrontation to my friends, who collapsed in laughter. “Come on, it was scary, I was being harassed!” I moaned.

“Your sentences are so simple, like a child,” they told me. “To him, you sounded just like a toddler with a dirty mouth.”

My fellow expats were a well-traveled bunch, and no strangers to immersion language learning.

“Your sentences are so simple, like a child,” they told me. “To him, you sounded just like a toddler with a dirty mouth.”.

“You have to use it constantly, even if you don’t know much!” Lisa told me, gabbing with every taxi driver and barman with her growing vocabulary. “Do you like swimming?” “How old is your brother?” “Is that a fork?” Her house was covered in post-it notes when a Thai friend came over and labeled everything. Gaa on the teapot, khohm on the lamp, dti-ang on the bed.

“Learning the written form helps you understand the tones,” Nicole said, as we dragged language textbooks to a cafe. The waiters, ever amused, would lean in to listen as we tried to speak tonally, tried to abandon the inflections that English speakers so naturally use. One gave us Thai names. “You are Thai now,” he said. My name, Nam-phon, meant “rain.”

My learning was slow, discouraged sometimes by the tones, the way one syllable could mean five different things. Sometimes when speaking a simple sentence, a shopkeeper would shake her head firmly, calling to a nearby friend that a falang was trying to order. The “foreigner blinders,” as we called it. She had assumed that any words coming out of a white girl’s mouth would be incomprehensible. Often, with my garbled tones, I’m sure they were. 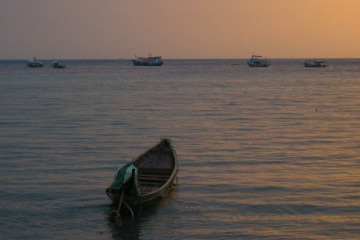 English always found its way to me, not just my language but the novelty of my foreignness. Children would stare as I walked by, yelling “Hel-lo! Hel-lo!,” then running away like kids at Boo Radley’s doorstep.

Sometimes, vendors would call out to us in scraps of English gleaned from western radio. “Yes, okay! Rock and roll! Very beautiful! Come on baby light my fire! Everything I do, I do for you.” The English language itself a gimmick, a part of the salesman song-and-dance.

The popular Thai expression “jai yen” means to have a cool heart, to stay even-tempered. Calmness, especially in the face of frustration, is a key trait in the Thai mentality. When I struggled for words, when Thais giggled at my poor pronunciation, I tried to keep a cool heart. Sometimes, my friends told me, it’s all you can do.

Tagged
Languages Narrative Thailand
What did you think of this story?
Meh
Good
Awesome