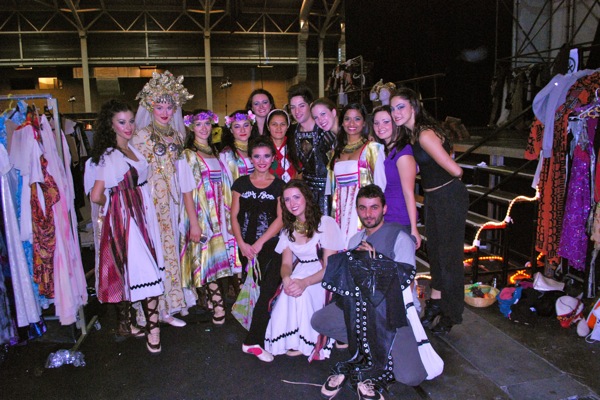 I was in Turkey for three months this past autumn to train with Fire of Anatolia, an iconic professional dance group in the country. Fire of Anatolia holds the Guinness World Record for fastest dance performance at 241 steps per minute.

I think the dancers should hold another world record: speaking Turkish at a million words per minute.

I knew I was in trouble from the moment I stepped into the first rehearsal. I wasn’t worried as I watched the dancers vigorously stomp on the cracked hardwood floors. I spent half my childhood inside a dance studio. Kicks, stomps, and turns are not foreign to me. Where my talents do not lie is in translations, conjugations, and cross-cultural communication. By the time I’m forming full sentences abroad, it’s usually time to leave. I’m the linguistic equivalent of a dancer with two left feet.

This time around, I tried to take things one-step at a time. Step one: counting. You can’t be a dancer if you can’t count, and you can’t learn a foreign language without crunching numbers. Lucky for me, dancers only need to count to eight.

During my first official lesson with Fire of Anatolia, the instructor Sinem tried to teach the routine while counting in English. She kept tripping over her words and counting in the wrong direction. She turned around to face the class, filled with twelve other anxious foreigners like myself. 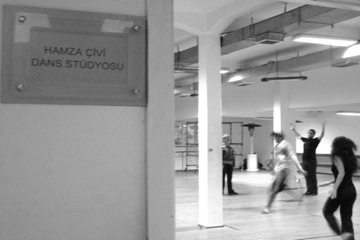 I watched the eyebrows of my fellow dancers raise.

Sinem began counting: Bir, iki, üç. I didn’t have much trouble remembering those numbers. ‘1,2,3,’ in Turkish sound oddly similar to three English words: ‘Beer,’ ‘Icky’, ‘Huge’. However, as the numbers went up, my confidence crashed.

“We move to the right at the ‘beach’ count?” I inquired. Sinem corrected me. I was to move my arms forward on ‘beş,’ meaning five. I hadn’t felt this perplexed in a dance class since I was six years old.

After two long hours, our group started making progress. We were dancing, singing, and counting in Turkish. Still, we were in no way graceful. Our dancing was off balance, our singing was ear curdling, and our number pronunciation was indecipherable. It’s a good thing Sinem only had to teach us how to count to eight.

After that lesson, my group proclaimed that particular choreography the ‘number dance.’ Now and again, you’ll still catch me going through the moves when I need to brush up on my Turkish numbers.

After counting to eight eight million times, I noticed numbers weren’t getting me far beyond the rehearsal hall. That’s when I bought a small notebook from the corner store. I scribbled down all the words I knew. It took surprisingly little time, maybe five minutes. I glanced down and realized the words barely filled a page. 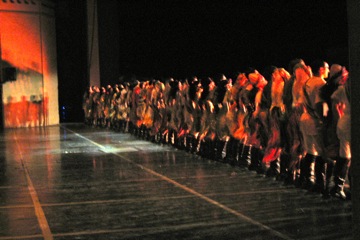 I couldn’t believe it. I had been hanging out with Turkish people everyday, but I could not form a single complete sentence. I faced the truth: I’d gotten lazy. I lived in a hotel where people spoke English. I let my Turkish friends practice their English with me but I didn’t do the opposite. That’s when I decided it was time to kick things up a notch.

I learned more Turkish during the following week than I had during the entire first month. I spent the breaks between classes sipping Turkish tea with the dancers while they taught me new vocabulary and phrases. I frantically wrote it all down in the notebook every night before bed. Suddenly, I had three pages of words.

At first, the words looked more like a dance syllabus. I knew how to say right and left, arm and leg, foot and ankle. I learned how to ask questions. When is rehearsal? What time is it? Where are we going? Lastly, in a dancer’s world of diets and calorie counting, I learned one very important phrase: ‘I am hungry.’ Ajictum.

I will admit I had to stare at the words and repeat them ten times before I actually remembered them. Slowly but surely though, I set foot onto the stage of comprehension.

On the bus back home from a performance one night, I listened intently as our instructor Apo spoke in Turkish to the other dancers. Apo uttered only a few sentences, but he spoke as fast as the bus careened down the road.

Come on Meagan, you know this, I thought. I managed to decipher ‘six’ and ‘go.’ Somehow, I figured out that there were six dancers missing, but we were going because they were coming later. Thank you, context!

An Audience Of One

The next major step I took was the decision to have a ‘conversation’ with someone who speaks absolutely no English.

That unsuspecting man was my new best friend at the hotel in Istanbul. Sid cleaned my room almost everyday. His round, smiling face would always greet me at the door. During our first meeting, he grabbed my cheeks like my grandmother, and wouldn’t stop saying how beautiful I was. “Choc Guzelle,” he said. He always left tokens of affection in the form of extra hazelnut stashes, packages of Q-tips, and seven pairs of slippers.

As the rain fell outside in Istanbul, Sid and I did the linguistic dance. Sid motioned to the unmade bed. ‘Hayir’, I said, meaning no. I didn’t want Sid to make the bed. I told him in Turkish to come back in two hours. I was about to proudly say goodbye when Sid whispered a word I couldn’t quite understand.

Wait, I thought. I think I know this word. He just said wait! He moved over to the bed, sat me down, and whipped open his wallet full of photos like any proud father would. I asked every question I knew how to ask in Turkish. Who? How many? How old? In a few minutes, I felt like part of the family. I learned that Sid has four children: three boys, and one girl. I did not utter a single word of English.

That’s when Sid spotted my Turkish notebook sitting on the night table. He motioned for me to show it to him. I went to open it and he snatched it out of my hands. He laughed at my spelling, then noticed I had English words written next to all the Turkish words he recognized. The lesson began. He would say the word I had written down in Turkish, and I would say it in English.

Meagan: “Nerede Gediyoruz?” Oh wait…”Nereye Gediyoruz.” Now your turn, Sid. In English: “Where are we going?”

I just smiled and nodded my head. He made the effort. After all, I know what it’s like to be syllabically uncoordinated. We said our goodbyes and took our bows.

I felt like I had come leaps and bounds. Before I came to Turkey, I relied pretty heavily on my sign language ability to communicate in a foreign language. The ‘I have to pee’ dance is fairly universal, after all. Now I could move beyond the body language. I could just sit down and talk with my new Turkish friends.

Performing with Fire of Anatolia and dancing for audiences made up of thousands was a still a thrill. However, finally having an audience of just one felt just as exhilarating.

Tagged
Languages Narrative Turkey
What did you think of this story?
Meh
Good
Awesome