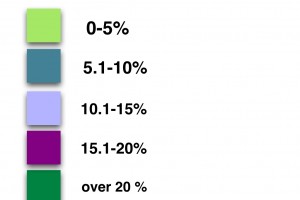 IN AMERICA, Spanish is the most common non-English language. Over 37 million people speak Spanish at home.

The American Community Survey, conducted annually by the US Census Bureau, collects social, demographic, and economic information on Americans, including language use. The map above shows ACS data on the number of people five years or older who speak Spanish at home, by state.

Mouse over your state to find out the percentage of people who speak Spanish!

Tagged
Languages United States
What did you think of this story?
Meh
Good
Awesome