Boarding a train on the Circular Railway in Yangon, Myanmar (Burma), feels like taking a journey into the city’s past. Morning passengers crowd into the train on their way to work as they have for years, with baskets, barrels, and bamboo farmers’ hats, ready to start a day in the markets, factories, and fields on the outskirts of the city. Fruit vendors balancing wide platters of sliced mango and men peddling large baskets of quail eggs spin on and off of the moving trains, shouting prices over the din of the clanking cars as they pace between rows of sandals kicked off by the cross-legged passengers reclining against the brightly painted metal walls.

Outside the windows, landscapes of green watercress fields, garbage-filled rivers, stilted bamboo houses, and a towering mountain of decades-old retired cars whirl by. Young juice vendors carrying red and blue plastic barrels and silver cups hang barefoot from the doorways of the moving train, grinning as they dodge the overgrown bushes that line the rails. Village children loiter by the tracks, and squinting workers squat by the empty rails and wait with their wares, the sun pouring down on large colorful umbrellas.

A ride on the Circular Railway 50 years ago might not have looked so different. However, with the opening of the country and rapid development that is changing the face of downtown Yangon, the railway is set for major renovations in the coming years. It seems the old train life and culture will soon be a piece of history.

[Note: This story was produced by the Glimpse Correspondents Program, in which writers and photographers develop in-depth narratives for Matador.] 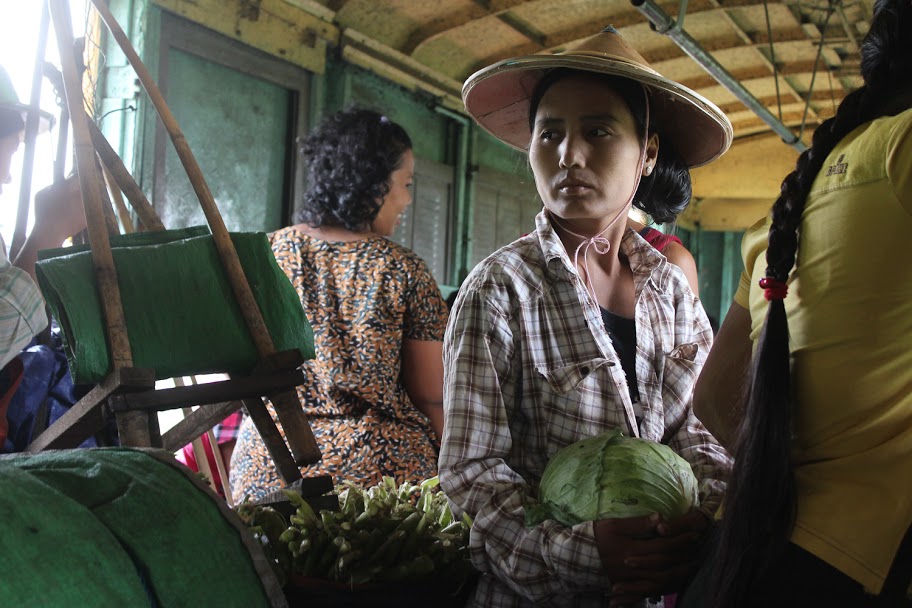 ...rides the railway, transporting cabbage from the fields outside of Yangon to sell in the market of Da Nyin Gone. Most passengers choose to ride the Circular Railway because of its low cost compared to other forms of transportation. Since the train mostly serves market areas, the industrial district, and farming villages on the periphery of the city, it is most often used by factory workers, street vendors, and farmers freighting produce to the market. 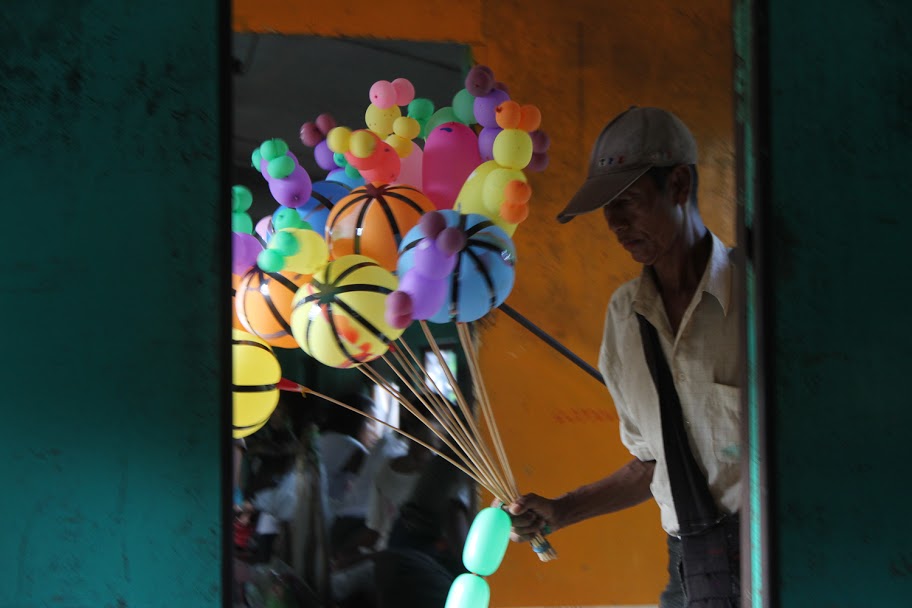 ...of vendors board the train cars at each stop to sell their wares to passengers. This balloon vendor boarded the train at the Shan Lan market station in the early morning, a time when many young children accompany their parents on the train on their way to work. 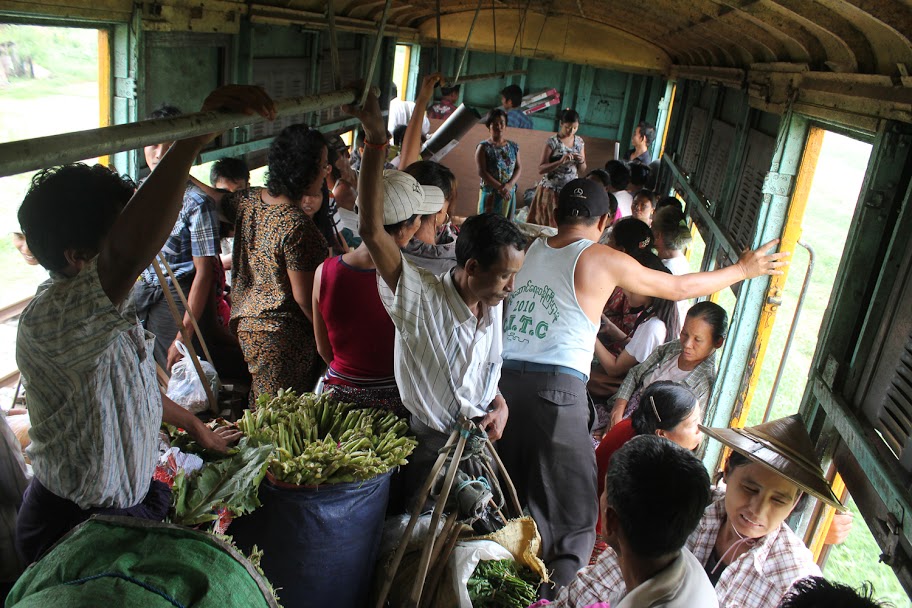 ...ride the Circular Railway to transport their produce from the farmlands to markets on the outskirts of Yangon. They are some of Yangon's poorest workers, and the cheap 100 kyat (~12 cent USD) round-trip ticket allows them to continue to use this traditional form of transportation. 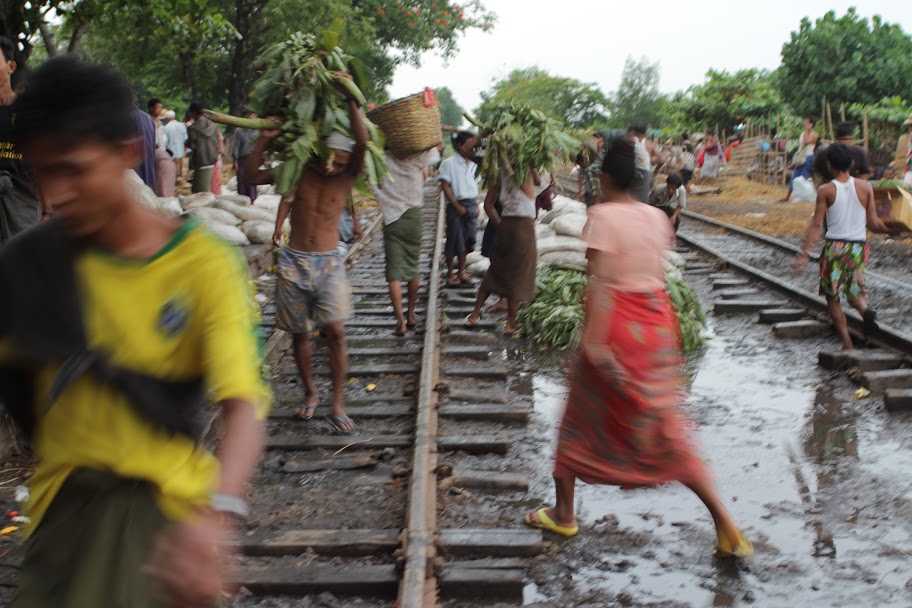 ...the train and striking up a conversation, one of these agricultural workers confided that he holds a master's degree in physics. The 35-year-old worked in South Korea for five years until his work permit ran out. Following many weeks of unemployment in Yangon, he turned to manual labor to help pay the bills. "This country is poor," he explained. "Transporting vegetables is tiring work, but I have to do it until I find another job." Many of the vendors and farmers who ride the Circular Railway have degrees and expertise far beyond their apparent occupation, but the limited opportunities in the country force many to revert to the manual labor and street vending jobs their parents did before them. In this sense, it seems as if train life hasn't changed for years, but this perception is a mask for a far more complex situation. 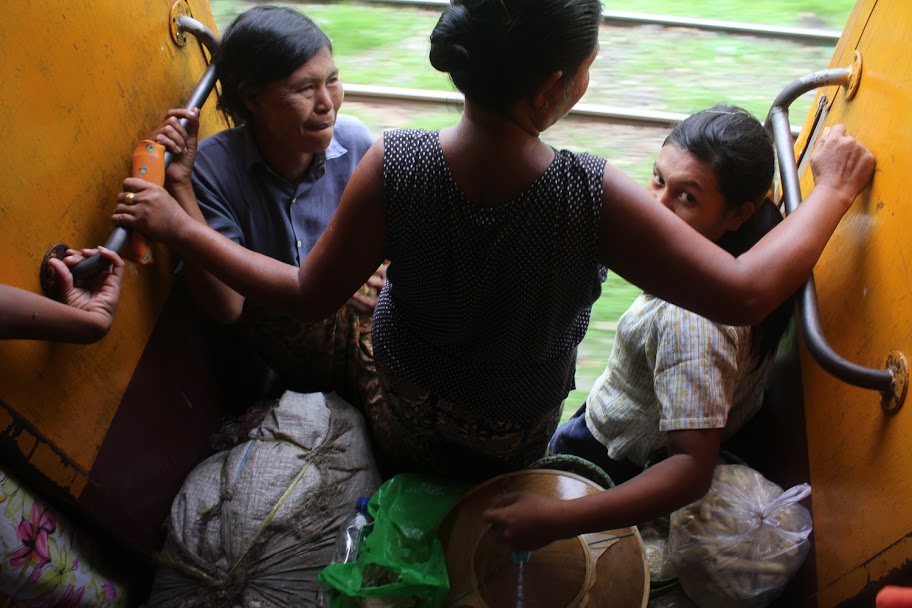 ...transporting goods to the market prepare in the doorway for the rush off the train at the next stop. The train barely comes to a complete stop at each station, leaving only a few moments for passengers (who often carry giant bags and baskets weighing more than they do) to enter and exit the train cars. 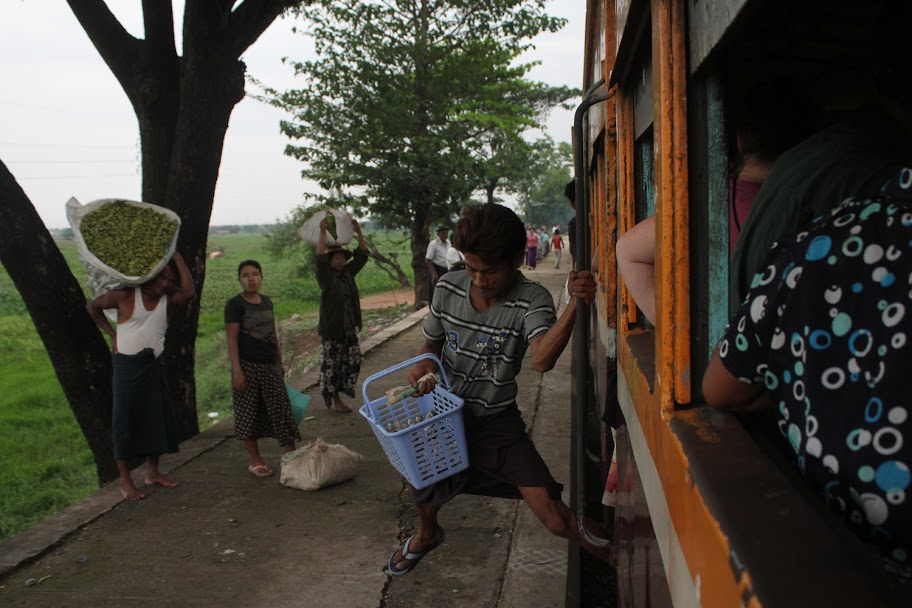 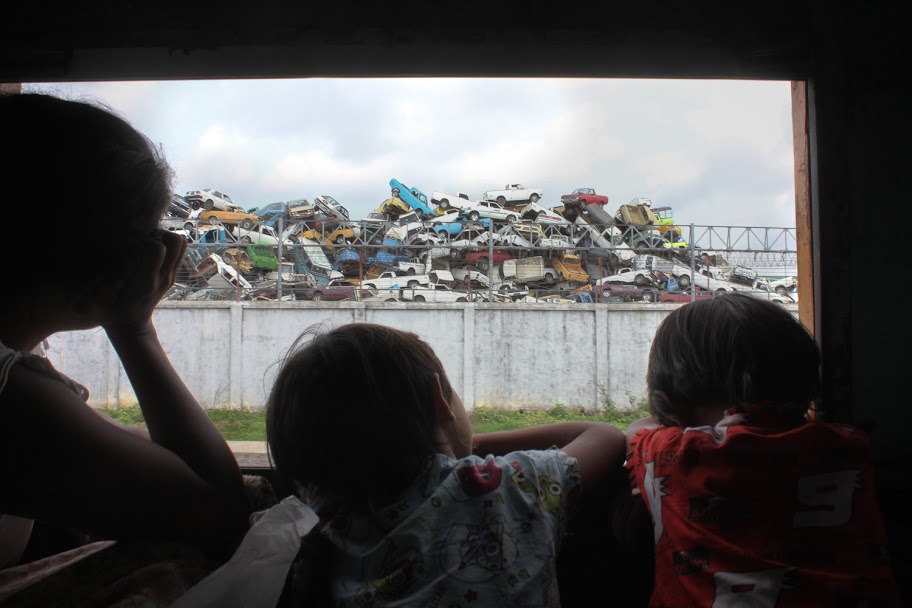 A mother and her children

...lean out a window as the train passes the towering "car graveyard" that stretches along the tracks. Many of the cars are battered Japanese models from the '90s, which dominated the streets of Yangon until a recent influx of newer vehicles from Japan and China took over. The Circular Railway passes through almost 46km of some of the most poverty-ridden peripheral areas of the city. Some include sprawling junkyards such as this one, located far from the city center. 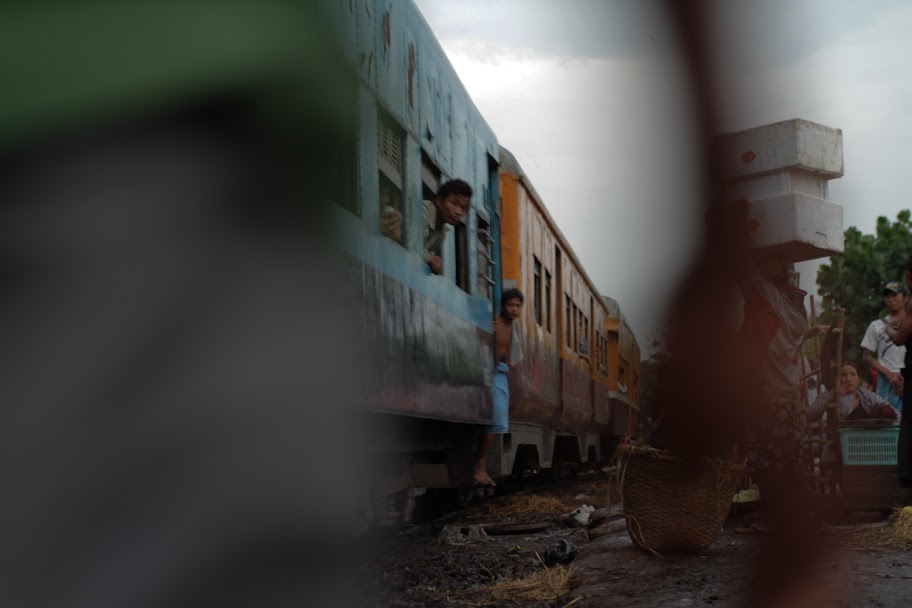 ...at the busy Da Nyin Gone station to ride the Circular Railway home after a day of work in the market. The wait is often long and unpredictable. Characterized by their low speed and infrequent service (approximately one train every 45 minutes), the trains are typically overcrowded and in poor condition. 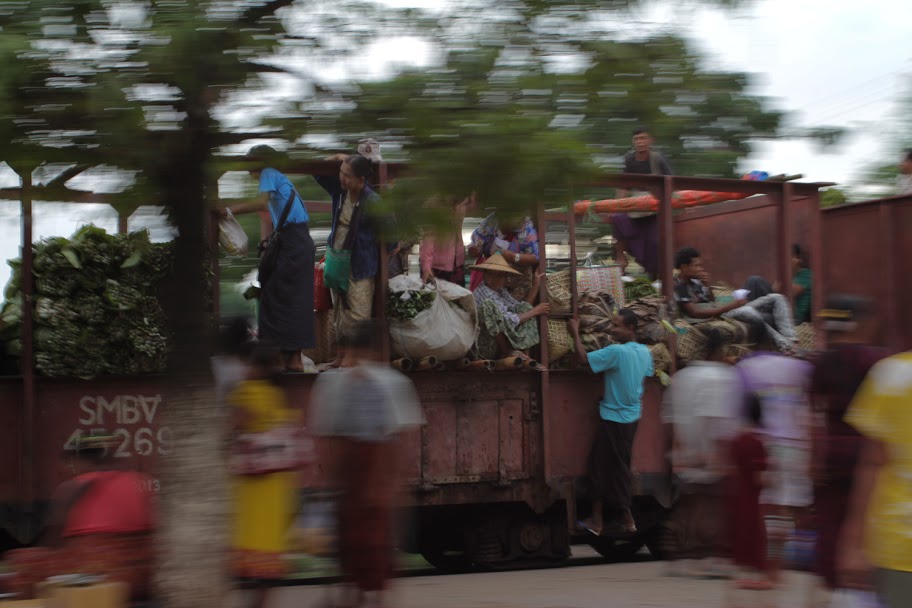 Farmers use the open cars

...of the train to transport large shipments of produce between the fields and the market. Without the train, many farmers' work would not be possible. It's a part of the landscape and an integral factor in the buying and selling process for countless farmers and vendors who would otherwise have no way to transport their oversized cargo to the markets. 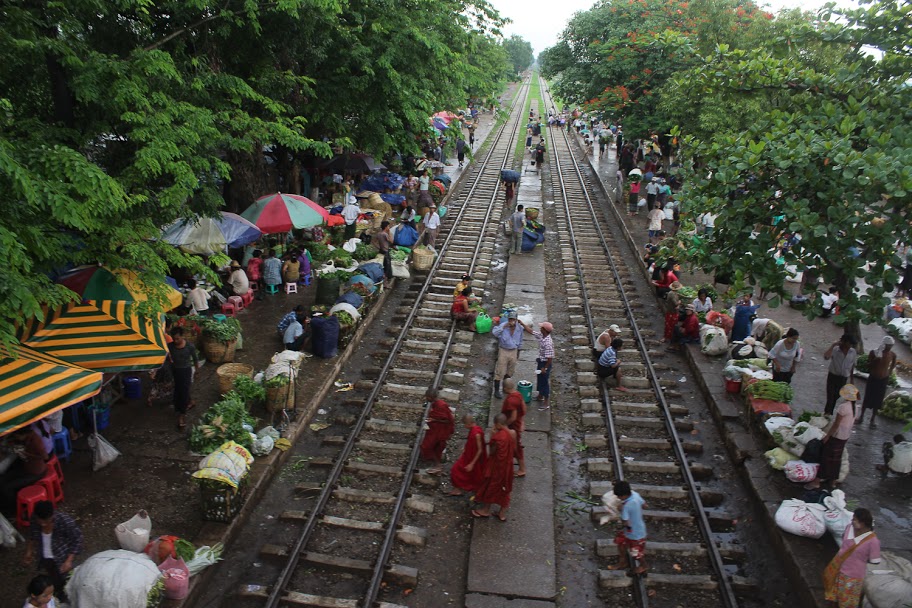 ...clothed in deep red robes are a common sight in Yangon. According to tradition, monks in Myanmar do not carry money unless it is offered to them as a donation, so they are often allowed free passage on the Circular Railway and other public transportation. 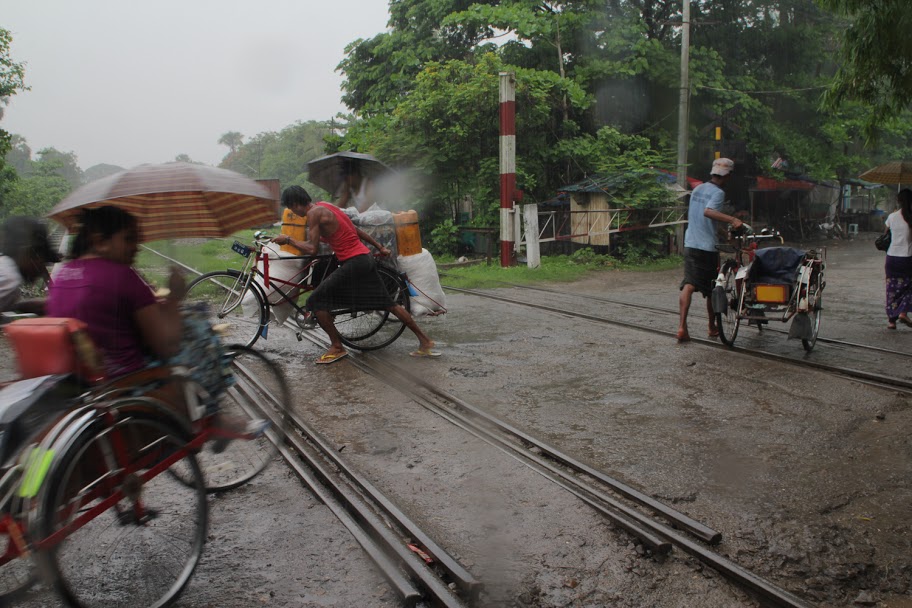 ...the train tracks in sidecars to get out of the afternoon downpour. Though automobile traffic is beginning to seriously congest the streets of downtown Yangon, bicycles and sidecars still dominate the roads of this lower-income neighborhood. For many years the military regime restricted the use of motor vehicles in Yangon through a high-cost tax and permit system, and only recently have cars, buses, and taxis begun to take the place of the Circular Railway and sidecars as principal modes of transport. 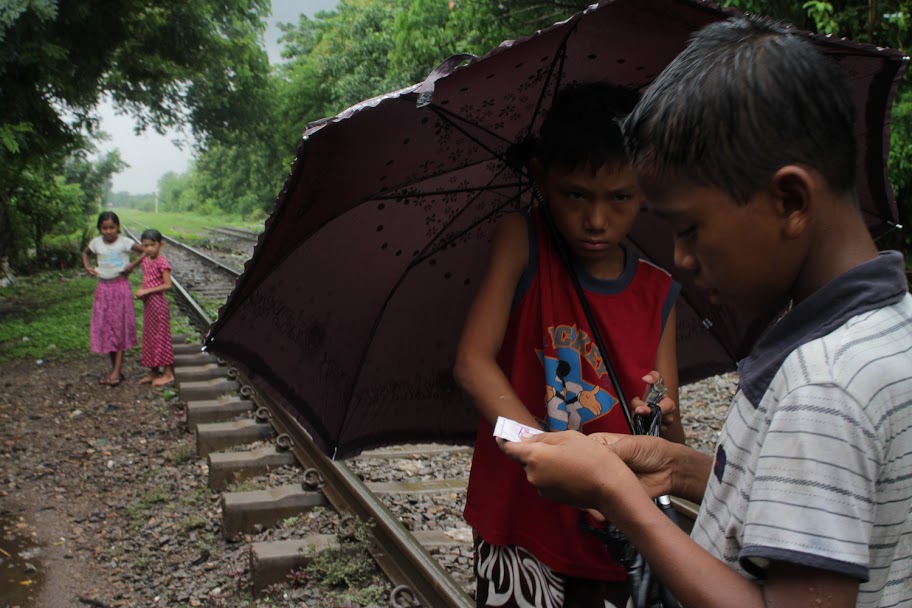 ...has been running the same route for over 60 years, and the neighborhoods and activities clustered along its course were clearly developed around its infrastructure. These children spend their days hanging out by the tracks while their family runs the small lean-to train station office across from their home. 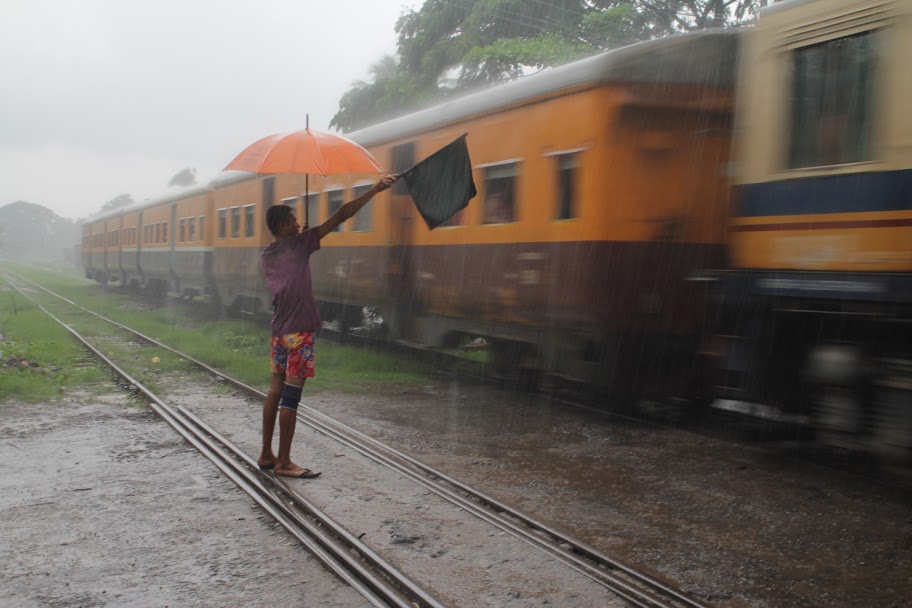 ...is in charge of opening and closing the gates at this train crossing, standing with a flashlight and flag to signal the trains to proceed. According to the Yangon Station General, many changes will soon be coming to the Circular Railway. Between new trains from Japan, improved rails that will increase speed, and the economic development predicted to ensue in the towns and areas around the stations, the Circular Railway will likely become unrecognizable in the course of the next 10 years, and roles like this will disappear when a modern automated system takes their place. 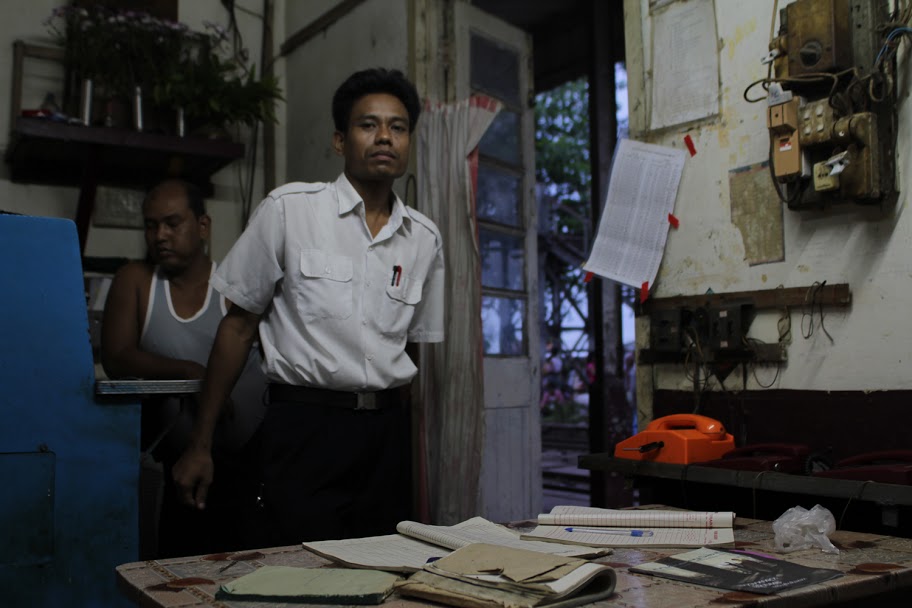 ...oversees station activities from a small office next to the market. All train records and transactions are noted in worn paper books -- a risky system in a city that frequently floods in the rainy season. This particular manager was also in charge of keeping an eye out for the pickpockets, who tend to frequent the crowded station and adjacent market. 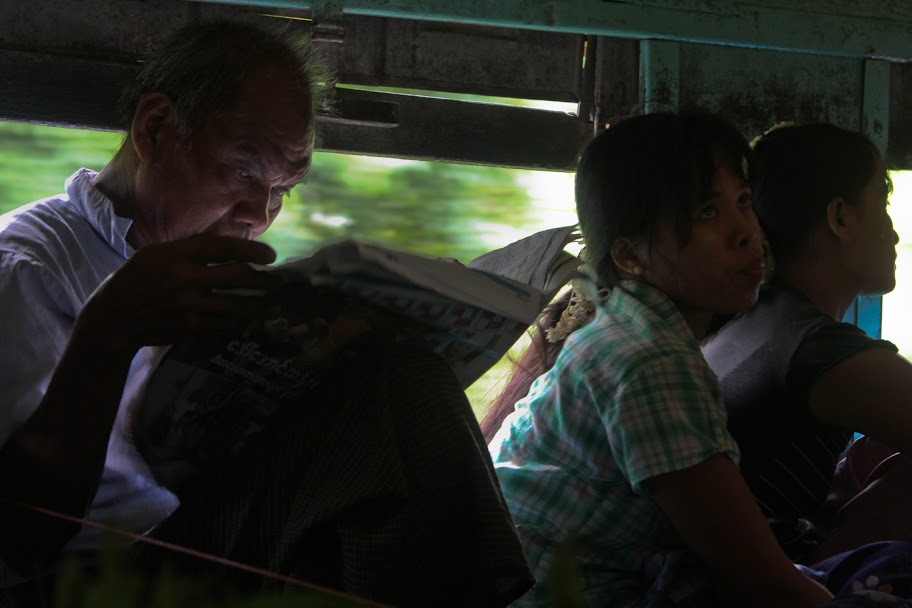 One might find the same scene on public transportation anywhere in the world. This particular man is a factory worker returning from the factory district on the edge of Yangon. Factory workers are the most frequent train riders in the early morning and evening, while the afternoon crowd is mostly made up of vendors transporting their goods between stations. 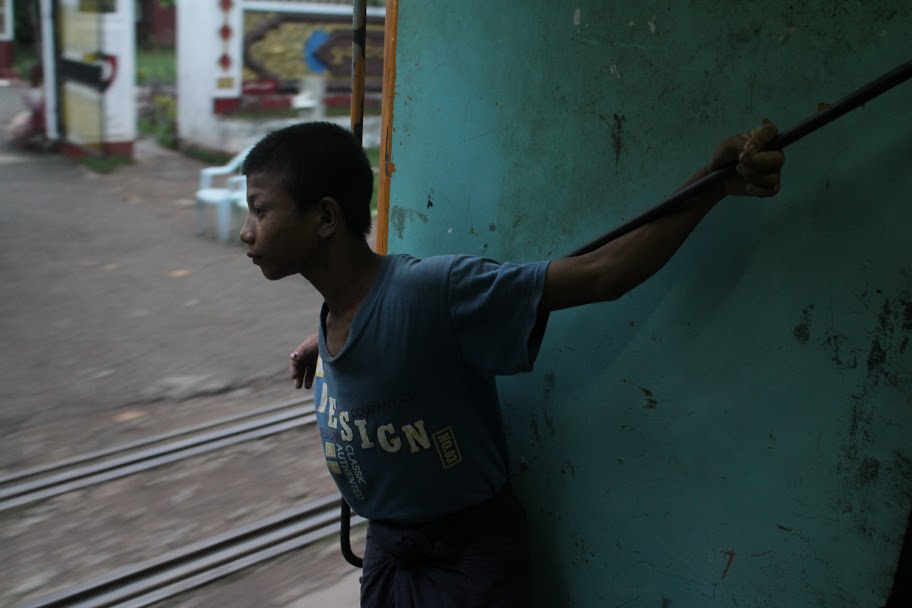 ...leans into the late afternoon breeze after a long day of work on the train. It's not unusual to see children working on their own on the train, often selling small snacks or cups of juice. As the country's economy develops and more opportunities open to the population, many families hope it will no longer be necessary to send their children to work like this. 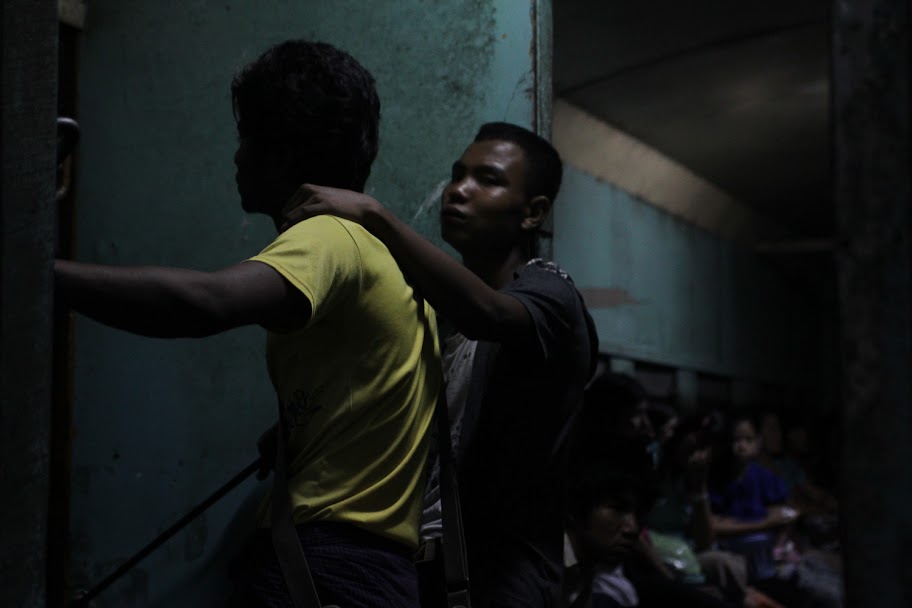 Friends support each other

...on the train as night falls in Yangon. Evening is dark and weary on the train. Small lights illuminate the doorways and hang from the ceilings of the cars, casting dim shadows on the wooden floors. There is a sense of exhaustion and a quiet very different from the daytime bustle. 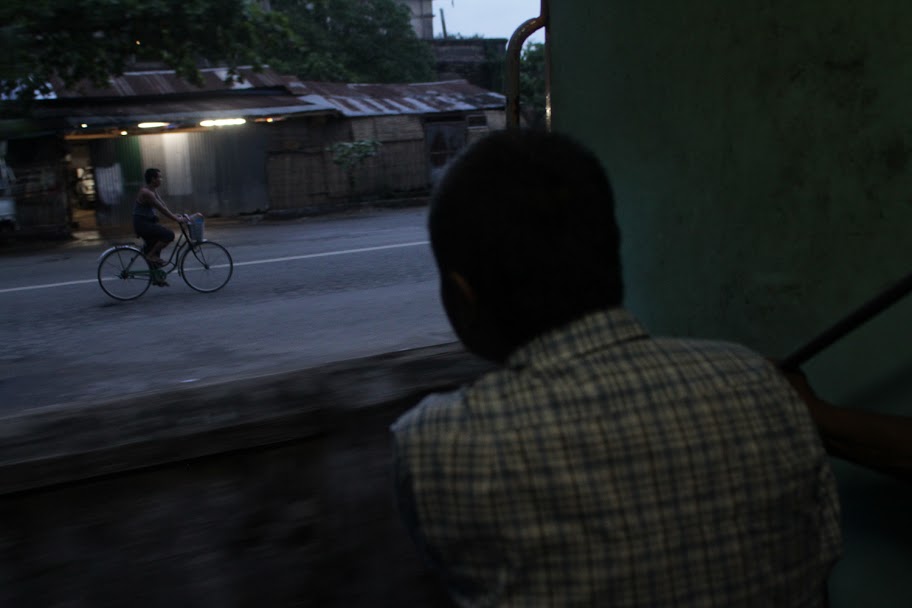 A man on his way home

...at dusk stands in the doorway of the train and watches the scenery pass by. Beside him, workers lost in thought lean against the walls and take in the cool evening air. A new day will bring them back to these cars, to go through the same circular trip on the same train, around a city waiting for greatly anticipated change.