Eight years. That’s how long I have felt South Korea’s influence. I have grown side by side with this fast evolving country. Now I am thirty.

Fresh off the plane, I gravitated towards the riotous neon of Seoul. Later on, I retreated to a rural town called Seosan, and turned my lens on Korea’s agrarian past.

I’m leaving for good soon, but before I go I want to share what I’ve learned about this welcoming, at times frustrating, but always fascinating country. 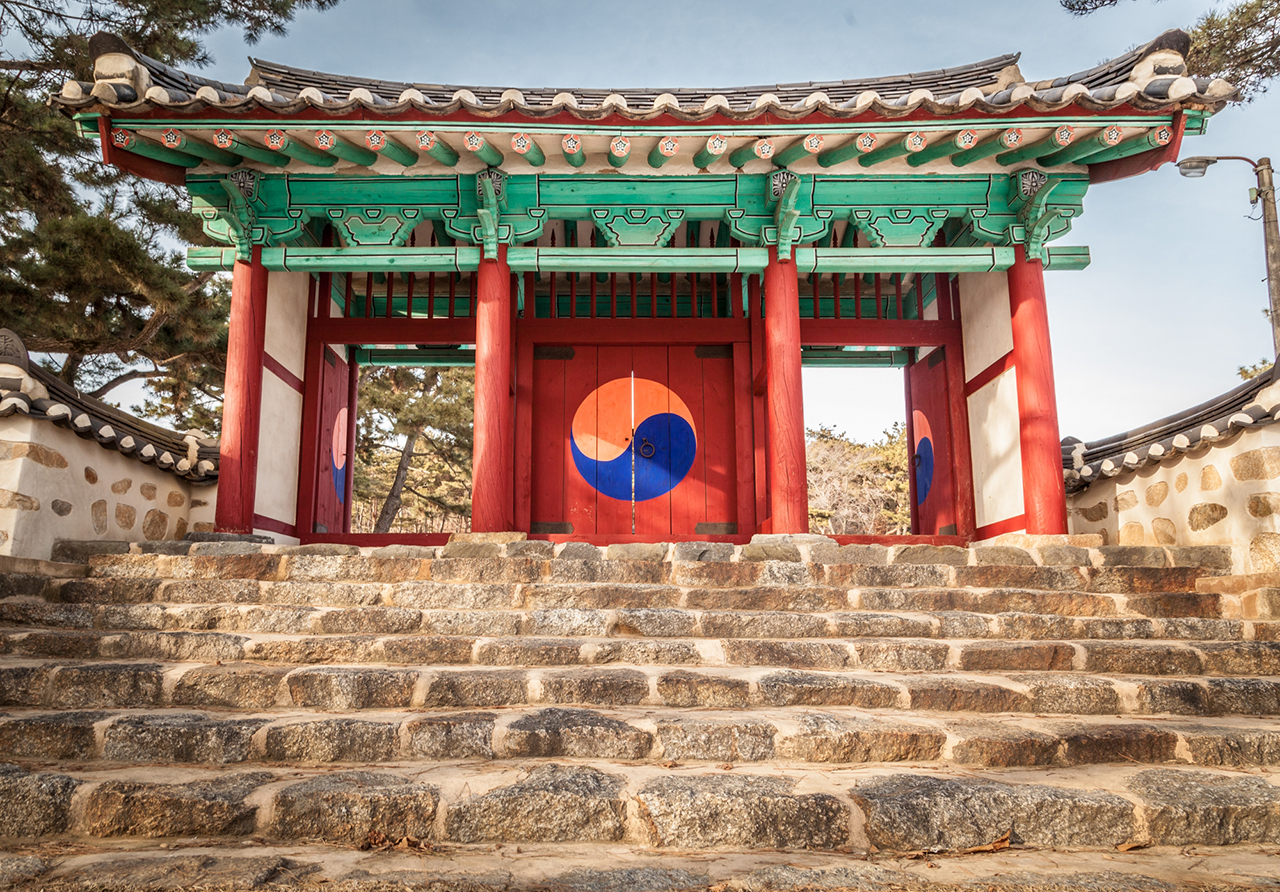 I learned where to go when I’m in need of some beauty. Ancient palaces, gates, and temples across the Korean peninsula are decorated with blues, reds, yellows, and cool aquamarines. This color-scheme even has a name – dancheong. I can walk 10 minutes from my front door, leaving behind drab, functional boxes, to find myself at gates to a 500-year-old shrine (image). Surrounded by dancheong, thoughts of a bad day at work fade and my soul is soothed. 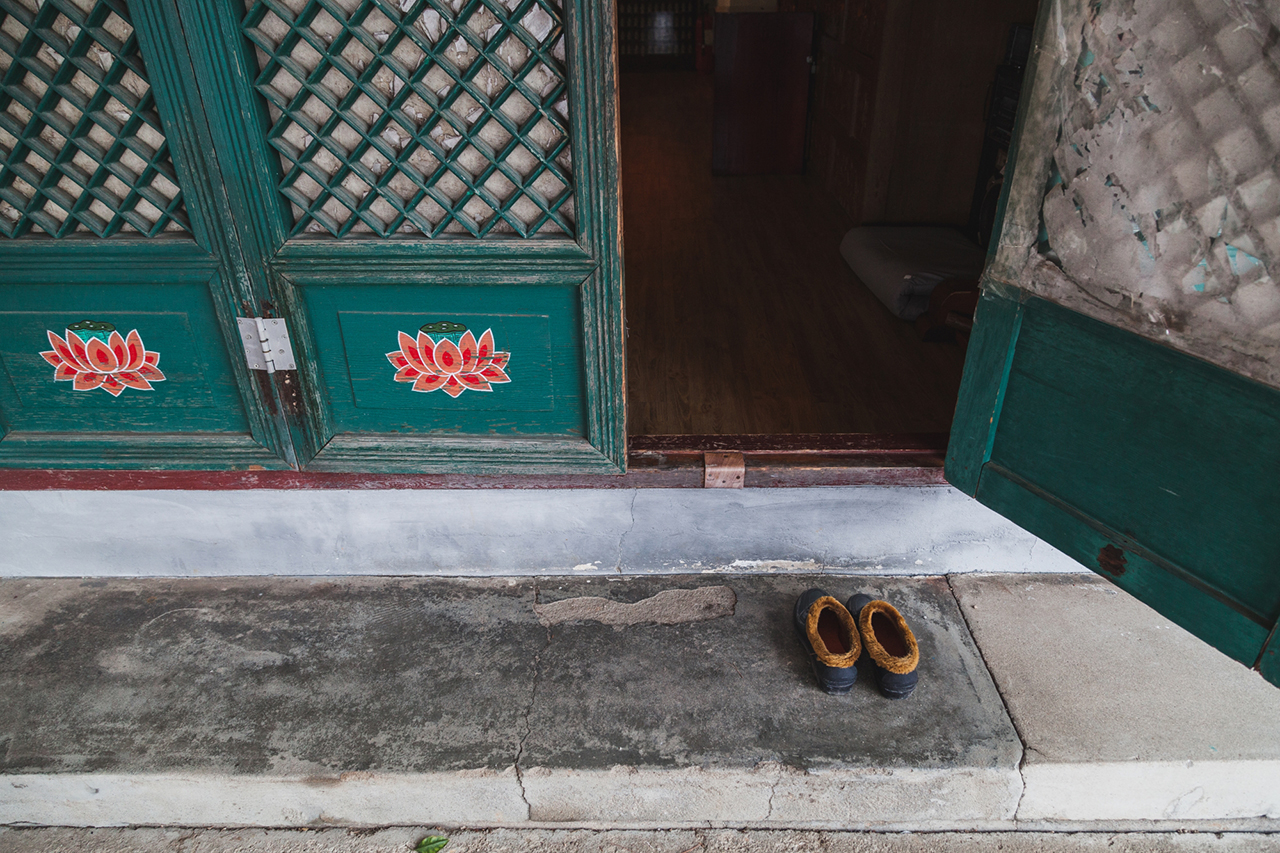 ‘Shoes off’ is an important rule in Korea – Gwaneumsa temple, Seosan

I learned a whole new set of manners. Things get confusing when I visit the UK. I can’t shake a sense of guilt when I wear shoes inside friends’ London homes, even though everyone else is doing it. Strange looks are shot my way when I bow to a supermarket employee or support my right wrist with my left hand when taking my change. People’s reactions when I slurp noodles and soup – impeccable manners in Korea – are of shock and disgust. 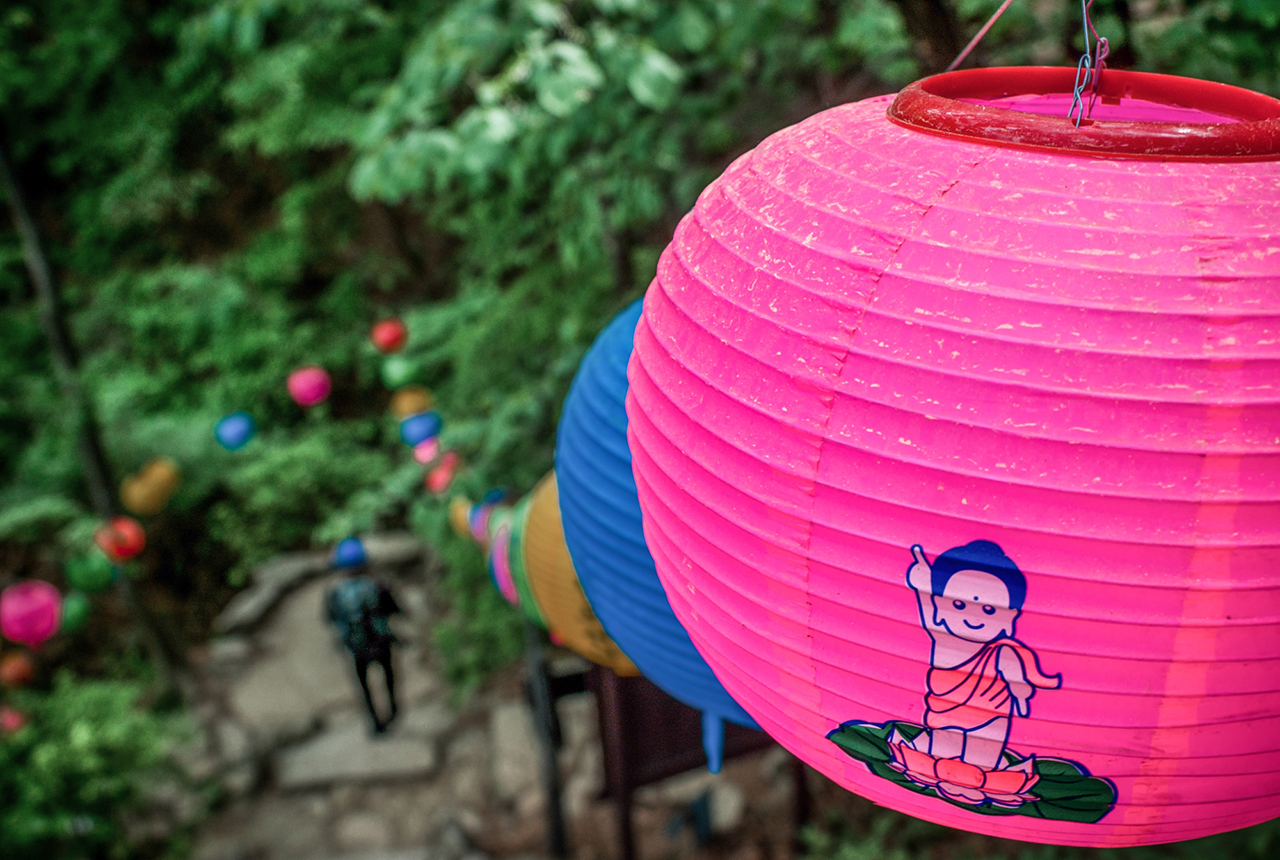 I learned to get excited about national holidays I never knew existed. In the weeks leading up to Buddha’s Birthday, Korea’s Buddhist temples come alive with multicolored paper lanterns bearing smiling Buddhas. The index finger of one hand points to the spirit world, while the other points to the material world. The lanterns are strung up in rows by the hundreds, and suspended carpets of fairy lights twinkle celestially after dark. 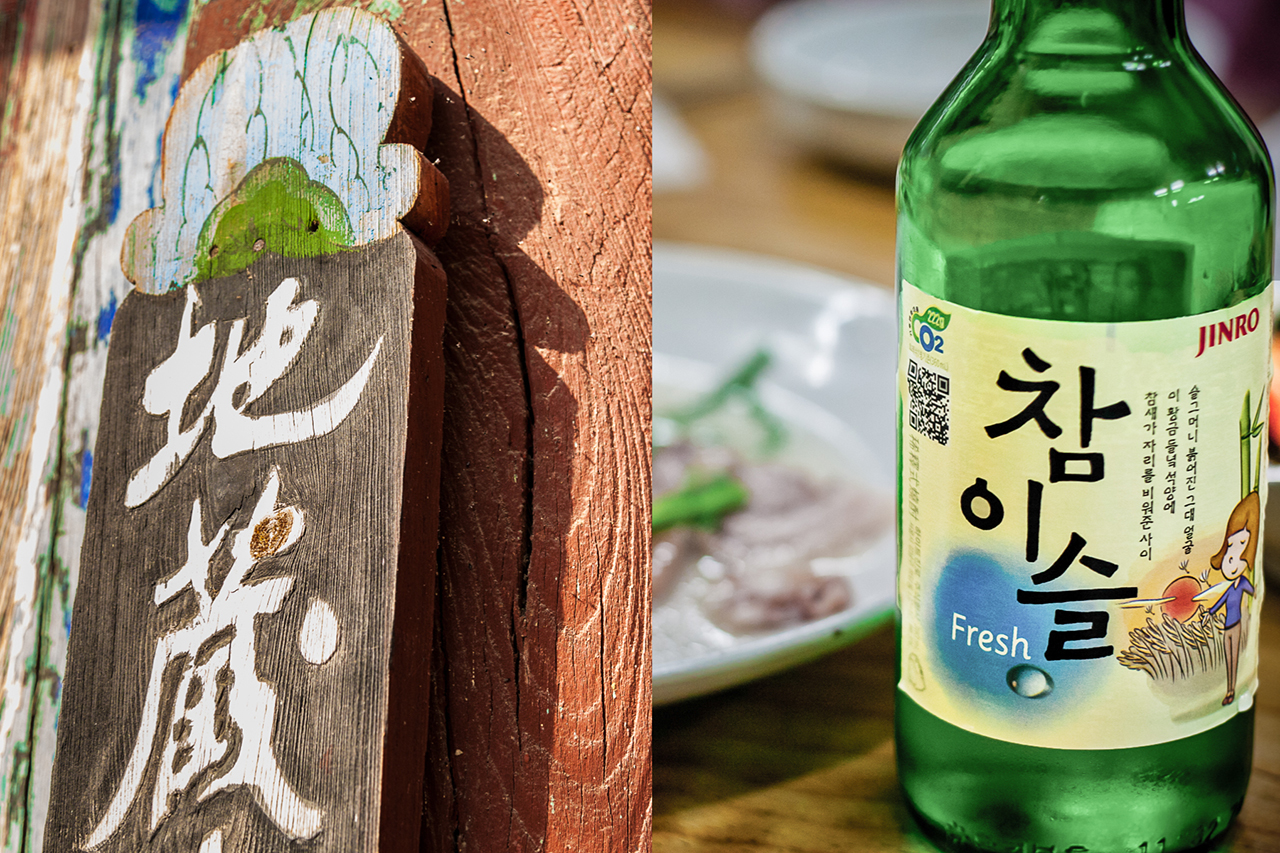 I learned to read again from scratch. The Korean alphabet – Hangul – was introduced over 500 years ago by beloved King Sejong. However, it took until less than 50 years ago to completely replace Chinese characters, when in 1970 the government adopted an all-Hangul use policy. Reading English words and place names adopted into Korean provided instant affirmation. I remember my first Eureka moment: “What’s that cafe’s name? Shee… ka… go. Chicago!” Yes, I thought, I can do this. 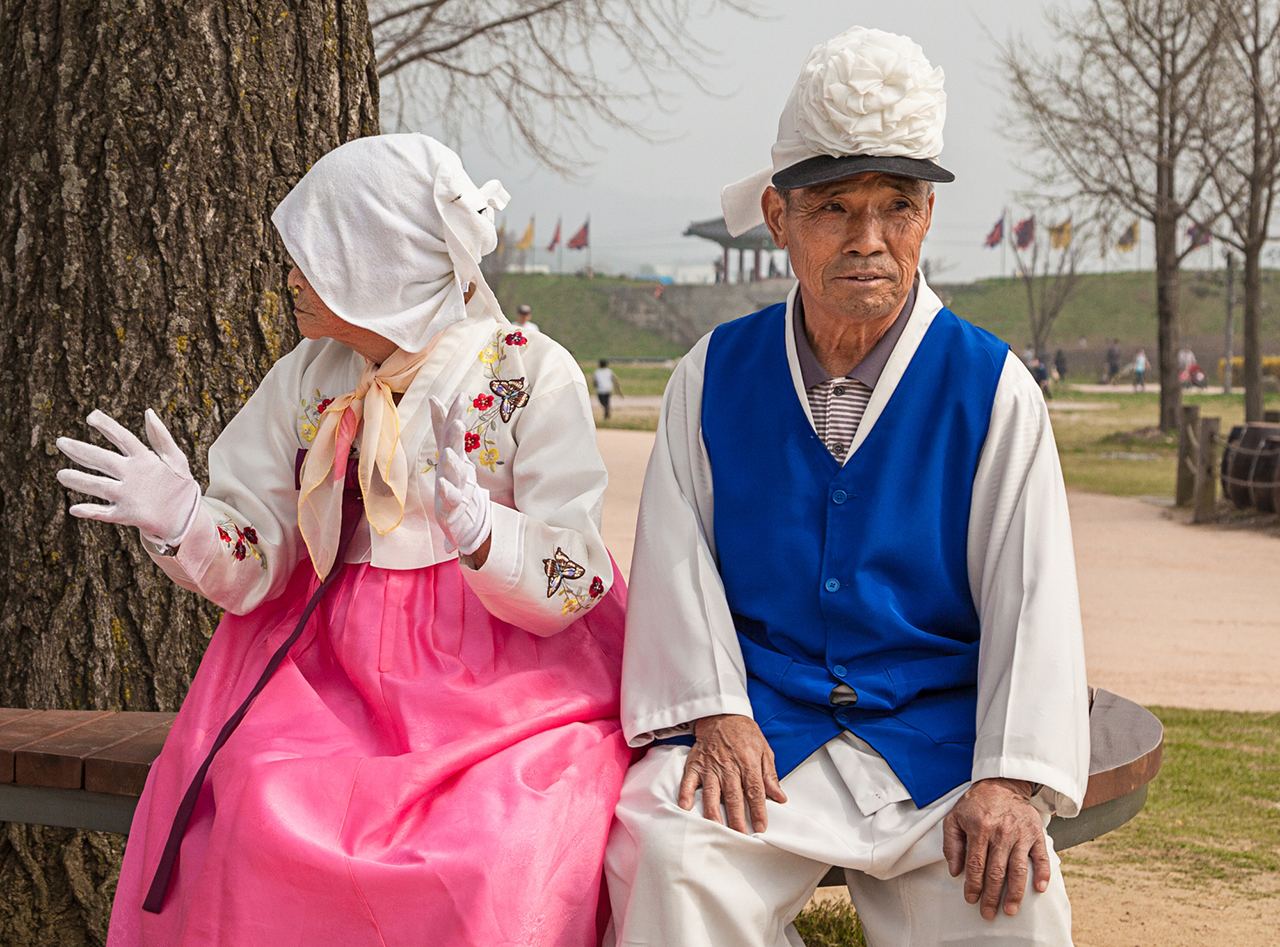 I learned to respect elders at all costs. As the elderly lady in white and pink hopped about nimbly, dancing to traditional music, I told her that she looked pretty in her dress. However, I made the grave error of conjugating the adjective into the less respectful form, making a pleasant compliment to a senior citizen sound like a cheap chat up line. For this, I received a sharp slap on the arm. Respect for elders runs deep in Korean society. They are always right, even when they’re wrong. 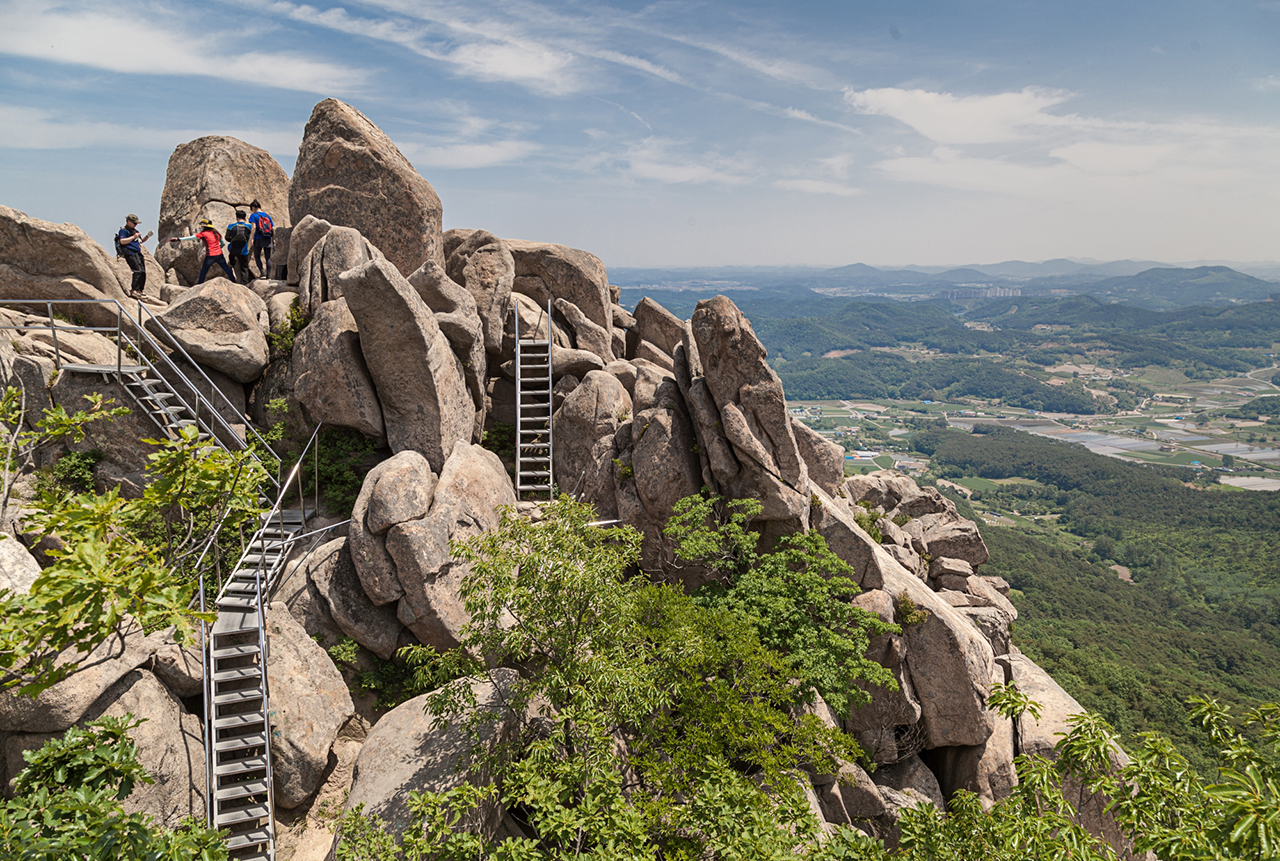 ‘Snakes and Ladders’. Rickety staircases are the only way to reach the top of many of South Korea’s granite-topped peaks – Mount Palbong, Seosan

I learned that I was not as hardcore as a group of old Korean men. On a mountain in Seosan, I was overtaken on a steep uphill section by four men in their 70s. I noticed that they all reeked of booze. It was 10 in the morning. “Where are you from? What are you doing in our country? Why are you hiking alone? Where’s your wife?” demanded the eldest-looking as he produced a bottle of cloudy rice wine. I had been looking for peace and quiet, while they were looking to carry on last night’s session. Silly me. 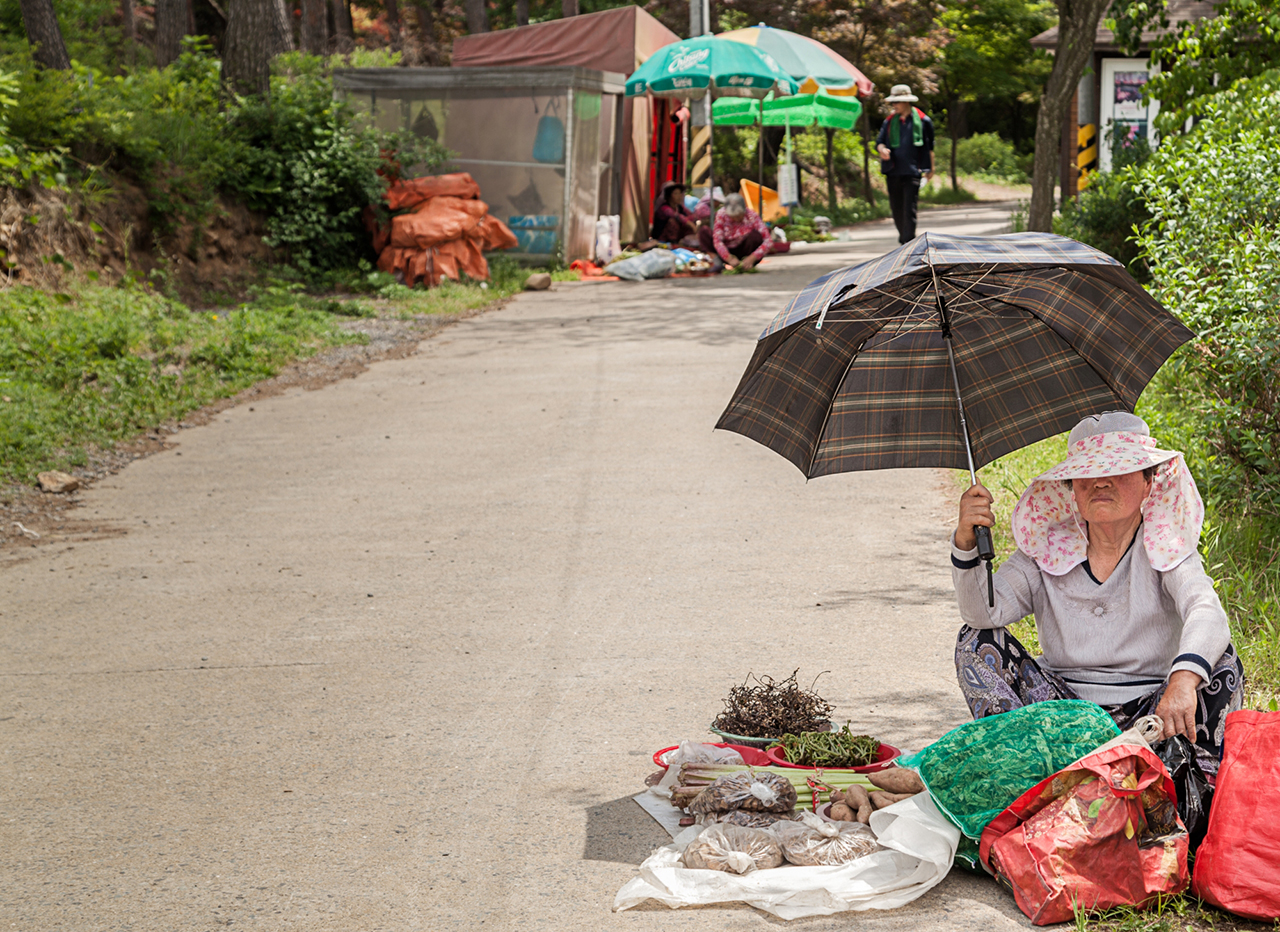 I learned the extent to which Korea takes pride in appearances. While at first glance this woman is taking precautions against sunburn, I discovered deeper issues at play in South Korea regarding skin tone. Having suntanned skin has long been associated with poverty and field labor. Despite the fact that she makes a living outside, she goes out of her way not to appear like she does. From the old ladies who sell mountain herbs on hiking trails, to the twenty-something Seoulites mocked by PSY in the lyrics to Gangnam Style – Korean society is permeated by the sense that appearance is everything. I never learned to see this as anything but oppressive. 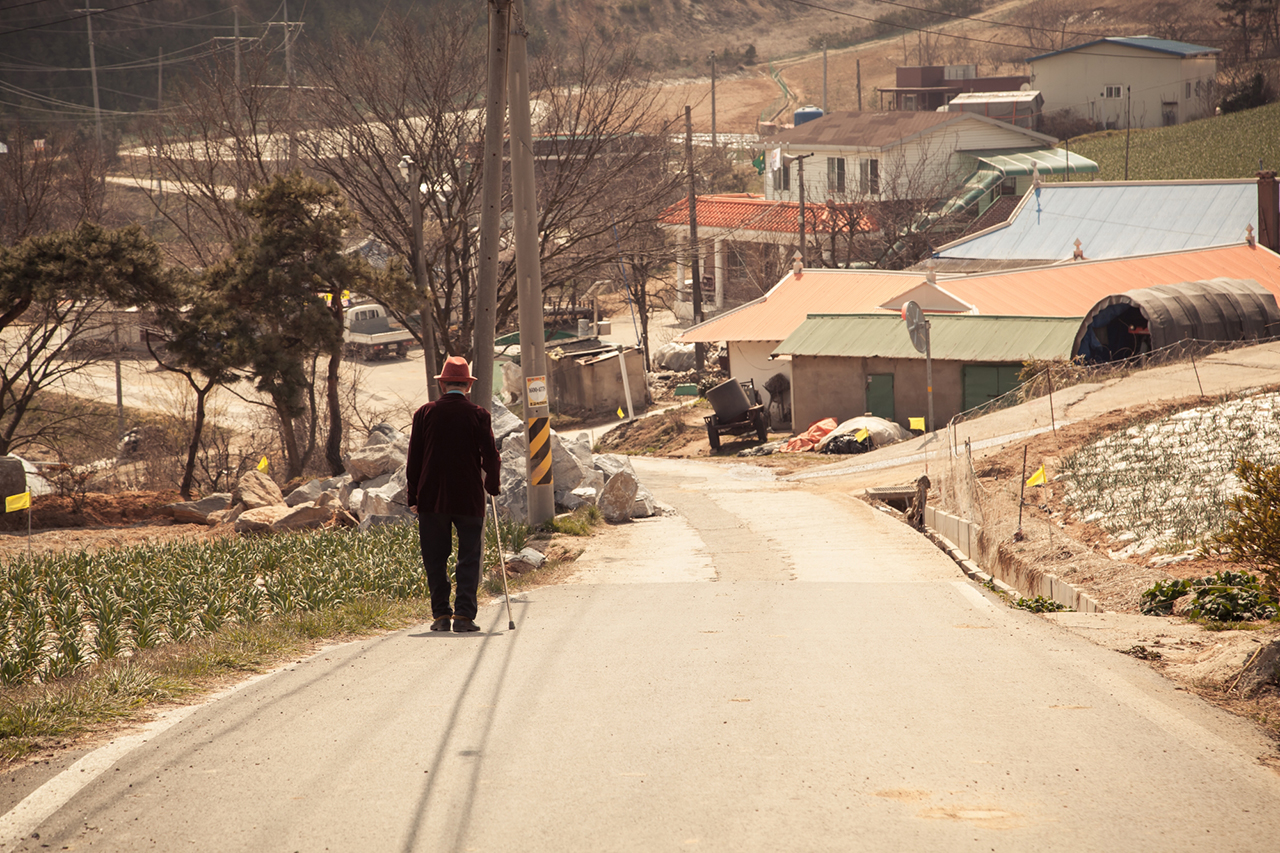 I learned that my Korean still needs a lot of work. When this elderly man approached my friend and I while on a bike trip this year, I tried my best to ask him for a photograph. What I said cracked a smile and surely left a good impression of foreigners, but I ultimately failed to get his permission for a portrait. Roughly translated, I said “Good day esteemed sir! Lovely weather, is it? I am England photographer. You have a really good face. Please give me picture.” I took this experience as my cue to learn better Korean for the next time an opportunity like this presented itself. 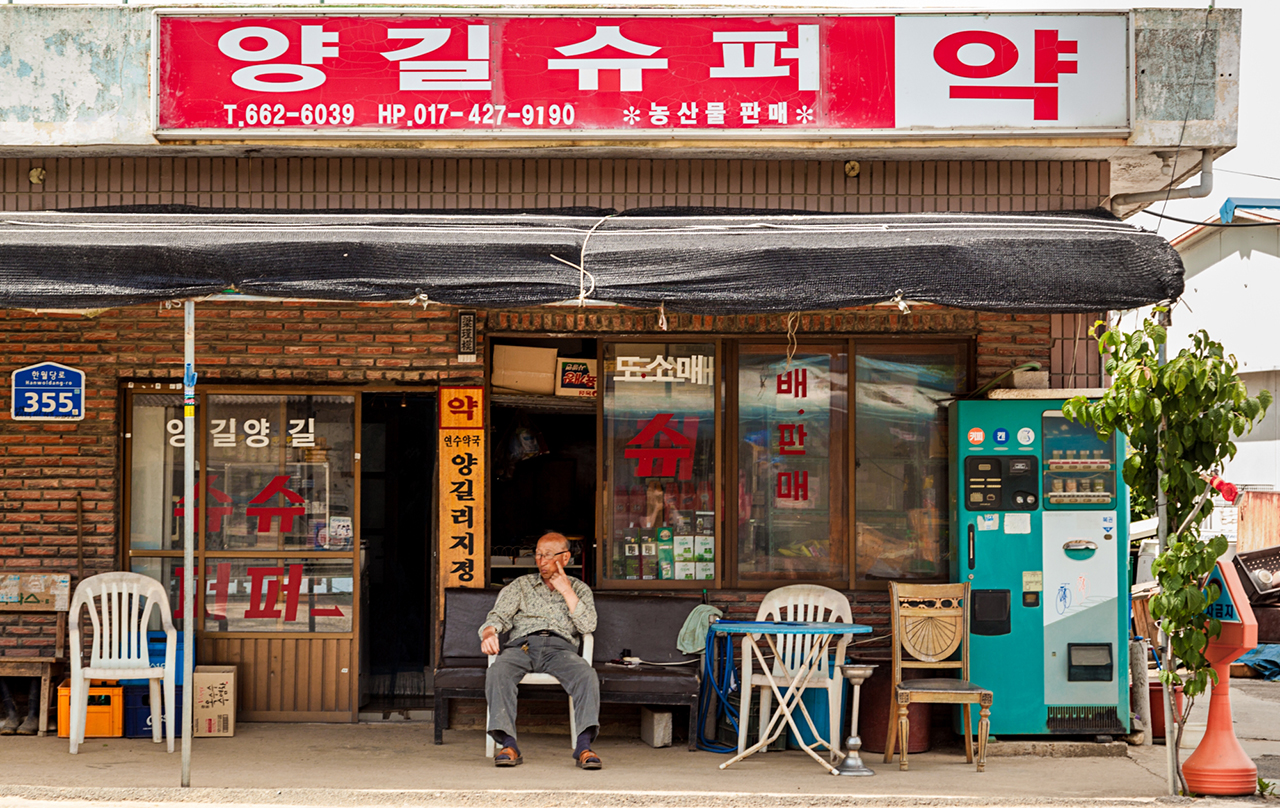 I learned to push deeper into the countryside. I found no greater peace or welcome than there. In a tiny hamlet, people invited me to drink rice wine. Kind strangers stopped to give me a lift to a bigger village after the bus stopped running. A pair of old ladies stopped to get a better look. Bent over at a harsh angle, they slowly became delighted by the sight of travelers, laughing and waving heartily. I watched the man in the image above sit outside his shop for an hour, peacefully waiting for customers who never came. 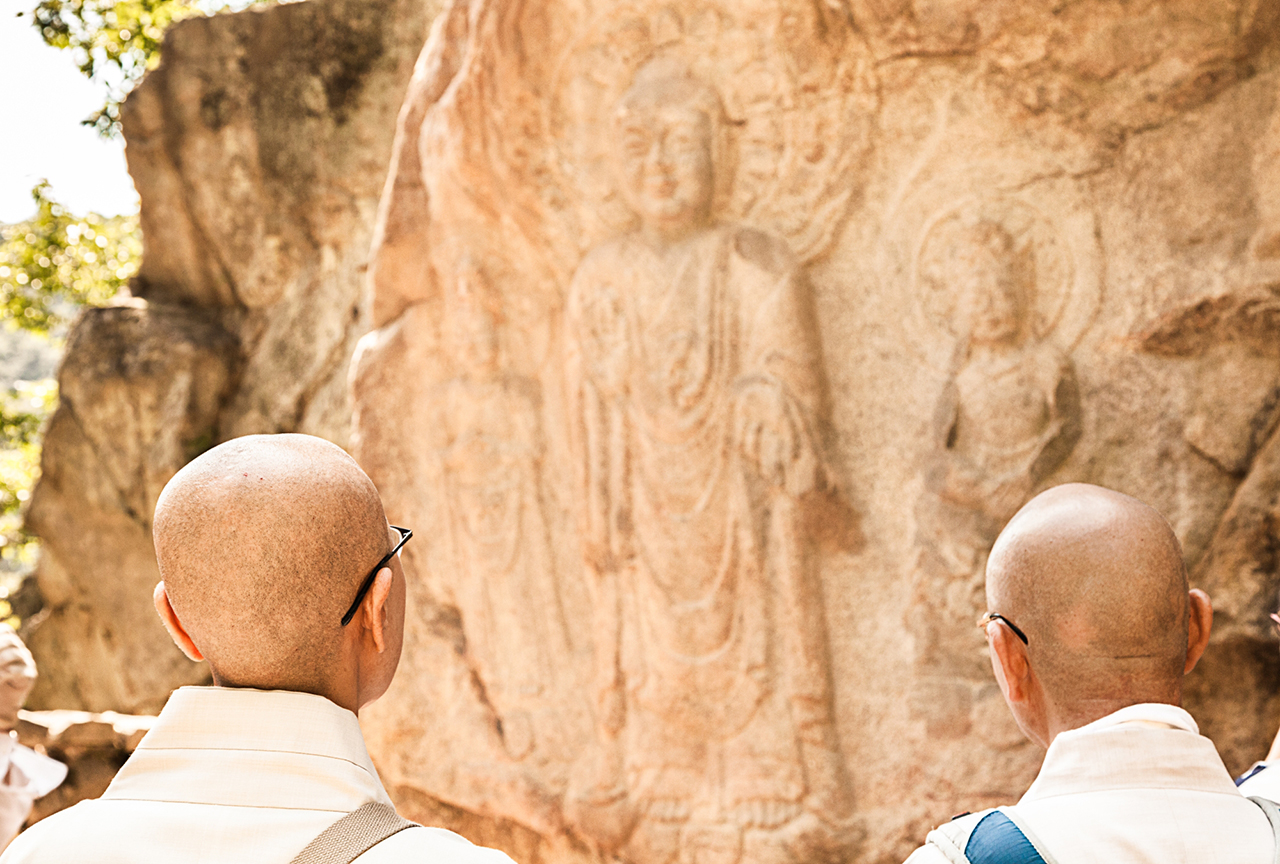 I learned that Korea is a great deal deeper than Samsung and K-pop. Although I have been known at times to wax lyrical about my favorite members of the pop group Girls Generation, I am more passionate about the traditional culture here. I prefer to look back, as these travelers did when they returned the smiles of Buddhas carved fifteen hundred years before. Ultimately, I believe Korea’s rich past will outlast the pop culture of today. 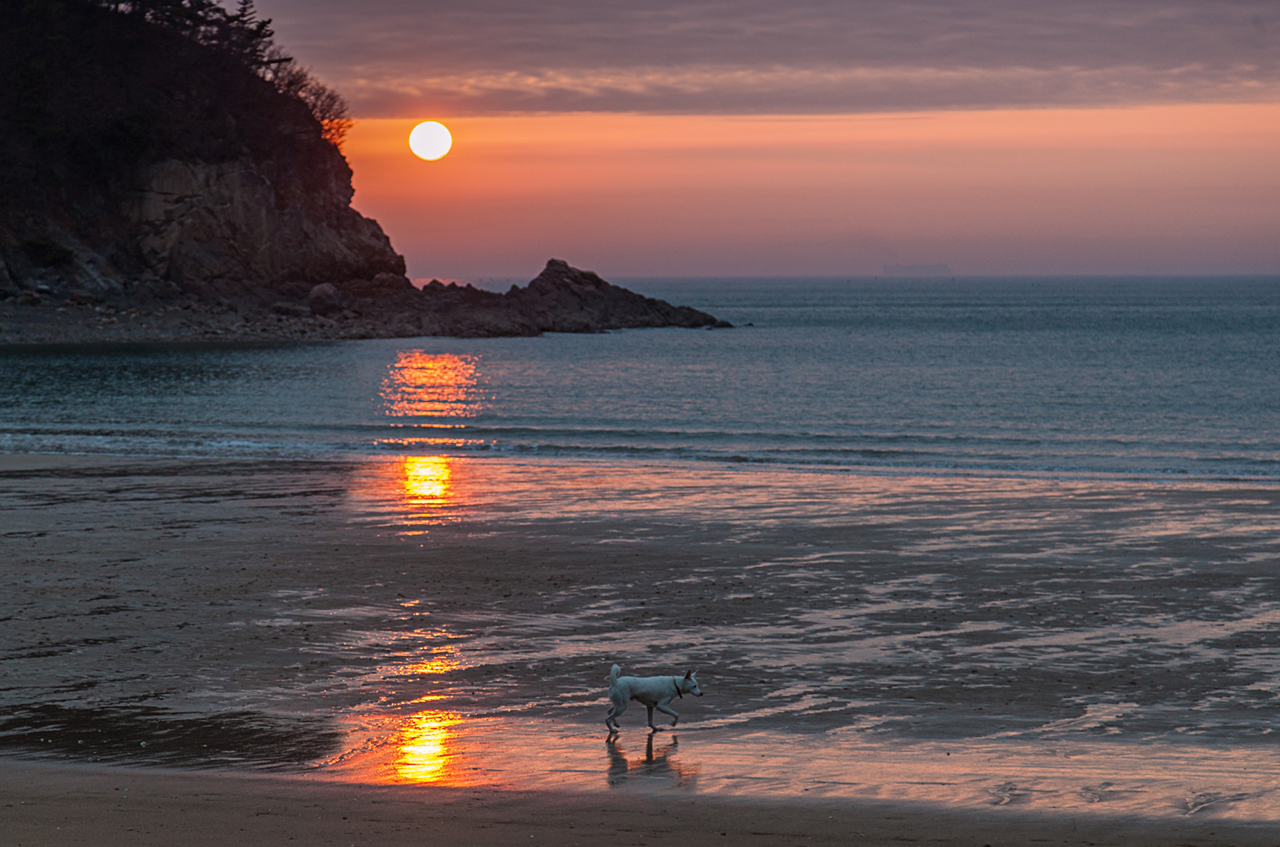 Korea — I’m still learning how to say goodbye. If I could write my last evening, it might take place on Baeklipo beach. From a chair next to a campfire, I’d pause to drink in a Peach Melba sunset. Fires aren’t allowed on Korean beaches, but a friendly chat with the man who lives in a house further up the beach, Mr. Kim, does wonders. The peace is disturbed by a wet dog returning from the water’s edge looking for a face to lick. Toasts are made to friends that became like a family on an obscure peninsula in East Asia. I raise a glass to the country that became my second home.

Tagged
Photo + Video + Film South Korea
What did you think of this story?
Meh
Good
Awesome