I’VE SEEN SOME CRAZY THINGS during the past month in Hue, Vietnam.

For a family outing, it seems quite common for three or more people to squeeze onto a motorbike. This includes children of all sizes and sometimes babies on the hip. I’ve seen as many as five people on a single vehicle, more than once.

The motorbike is the most common tool for moving things from A to B. The driver will stack, pack, strap, and cinch any number of items before barreling down the road. Another standard mode of delivery seems to be the cyclo. Large appliances and furniture pass us on the street under the foot power of cyclo drivers. Somehow they never seem to wreck.

Recently, my wife and I saw a motorbike accident in front of the restaurant where we were having dinner. Luckily, no one was hurt. After the police left it was time for cleanup, and two cyclo drivers were brought over to pick up the debris. They literally used their cyclos to hoist the motorbikes like a forklift, balance them, and then move them off to a safe place for the owner.

This selection of photos is a testament to the drivers in Hue, for whom it’s all just another day’s work. 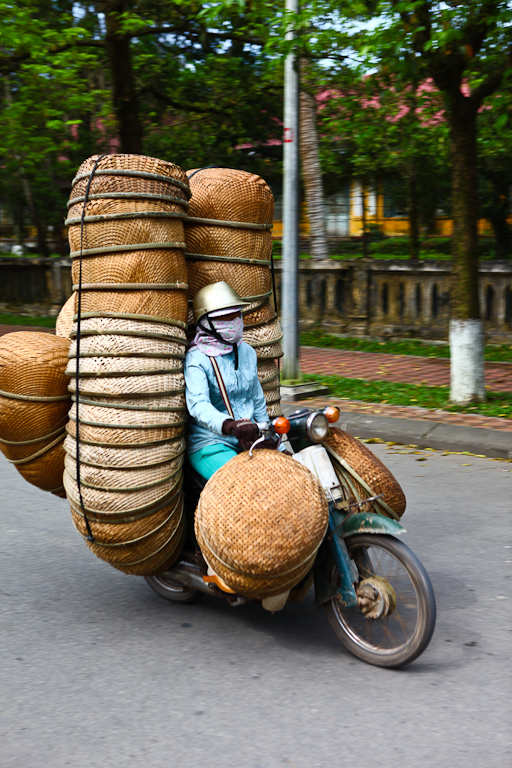 Too much or just right?

This is a shot from the Citadel in Hue of a lady delivering a large number of baskets to Dong Ba Market. Seeing amazing feats like this inspired me to take photos of all the crazy things I've seen being transported on bikes in Vietnam. 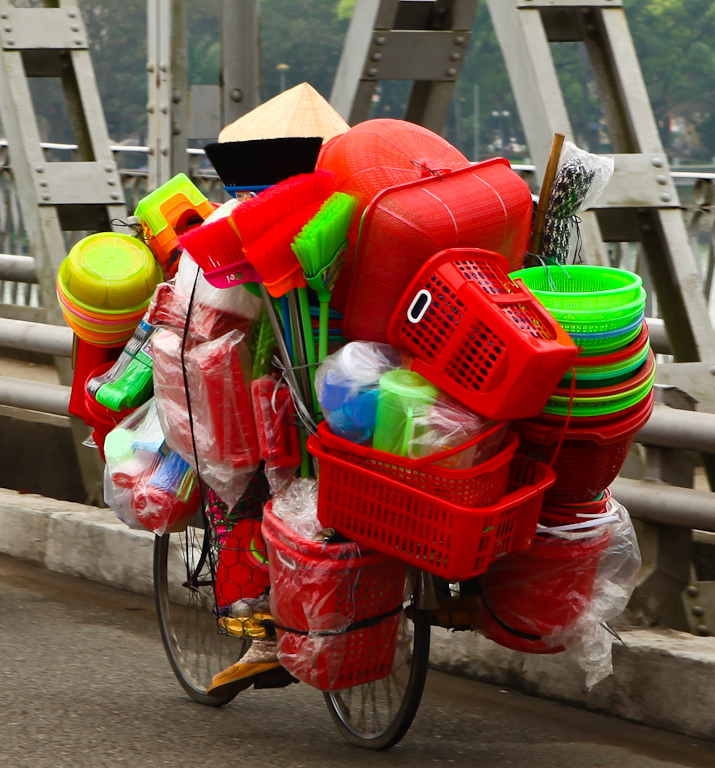 We'd spent the morning looking for a market where we could buy water and supplies more cheaply than in the tourist neighbourhoods. Then we came upon this saleswoman. She takes her market with her as she crosses the bridge into the suburbs. Unfortunately, she didn't have anything we needed. 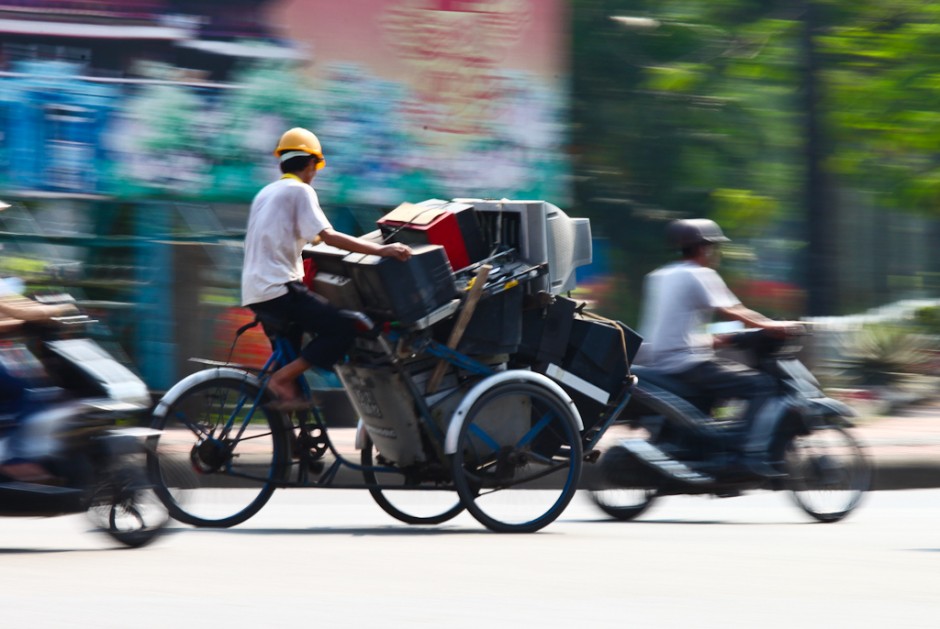 This man has collected used TVs from around the city for reuse or resale. For some reason, we racked up many strange cyclo sightings this day before we even had lunch. 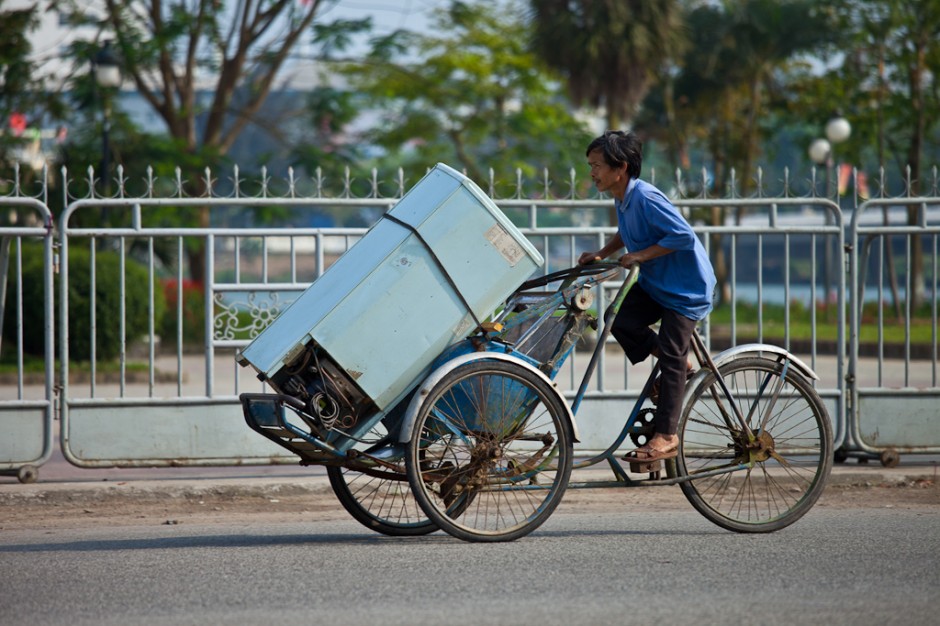 This picture demonstrates what can be accomplished with just basic transportation. This gentleman is delivering a refrigerator in the crowded streets of Hue. He passed us on the far side of the street while we were looking for a cool way to relax in the Vietnamese heat. I hope he found a beer as cold as the one we were drinking when I took this picture. 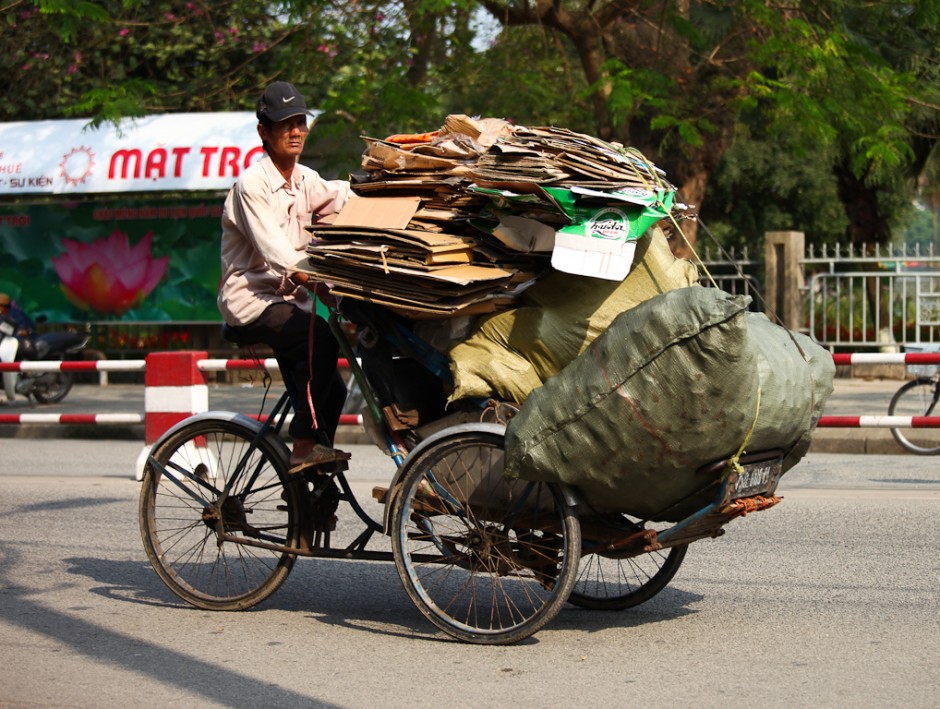 These big green recycling bags are a common sight in Vietnam. Though they don't have recycling bins, you do see people going through the trash and collecting recyclables. We hope our bottled water at the hotel ends up in one of these bags. 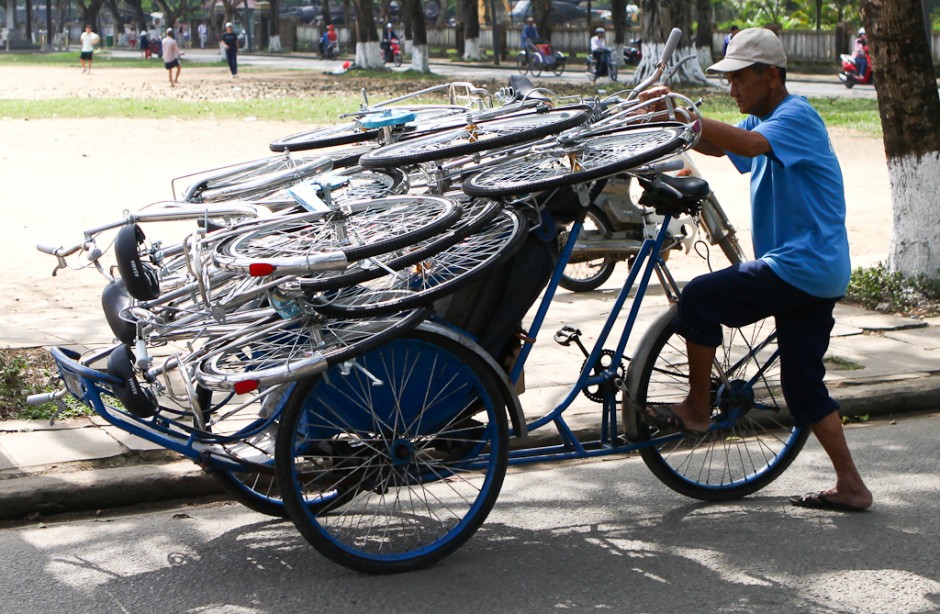 I'd had a few new suits tailor-made by a shop in the Citadel in Hue. We'd taken the long walk from our hotel to the "veston" to pick them up, and were faced with carrying the bulky bags back the way we'd come. As we walked home, we passed this gentleman, who was using his cyclo as a moving truck to transport new bicycles to the dealer. After seeing him, carrying a few new suits seemed quite easy. 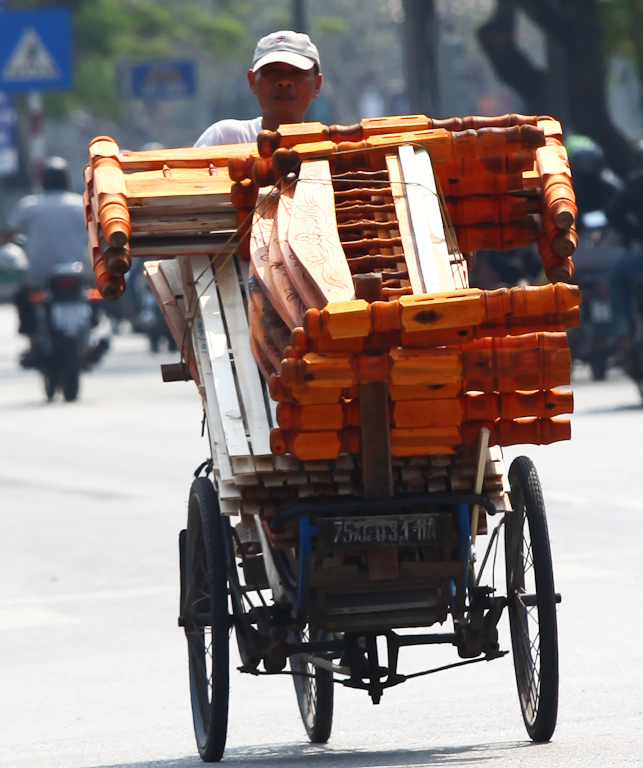 During the hottest part of the day, we usually prefer to relax at a cafe with a snack and cold drink. However, this furniture deliveryman was bringing a bed (or two) to the Citadel area in the scorching heat of the afternoon. After he passed, we wiped the sweat from our own foreheads and went to a cafe for some fried rice and nem lui (pork rice paper rolls). 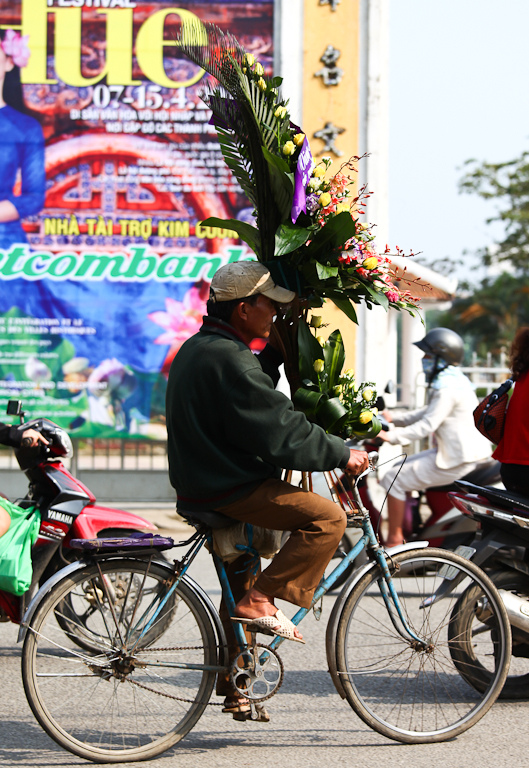 Flower merchants line the streets in certain sections of Hue. We've seen them make floral arrangements like this for customers on the spot. This man was bringing flowers home on his bicycle. International Women's Day was near...I wonder if that was the special occasion? 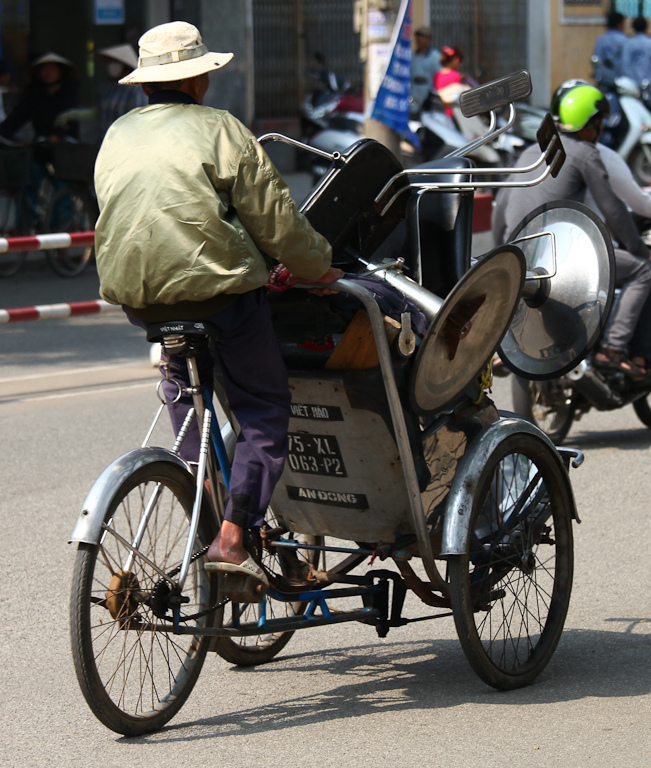 The new barber shop in town must have been waiting on this guy to deliver their chairs. They looked like they might tumble off at any minute. I probably should have followed him...a few months on the road and I could really use a haircut. 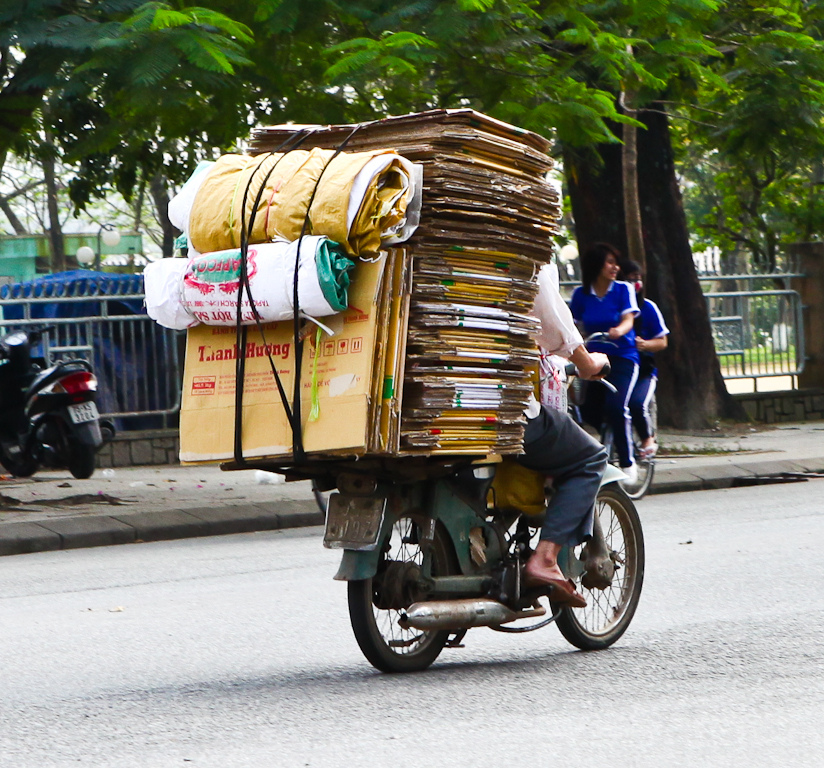 We crossed the large river in Hue in search of some local food away from the tourist crowds near our hotel. This guy passed us as we were strolling by the park. Looks like he tried to squeeze as much cardboard onto the motorbike as possible to minimize trips to the recycling center. 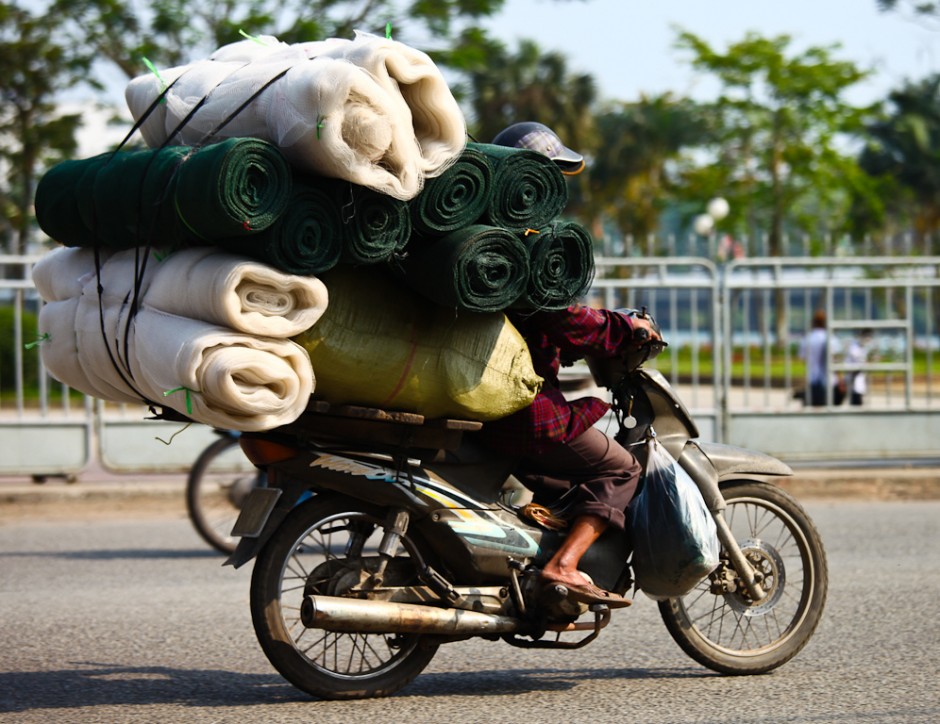 We watched this guy slow down at a busy intersection in Hue. Carpet can be quite heavy, but this man seemed to have no problem driving around with the weight. 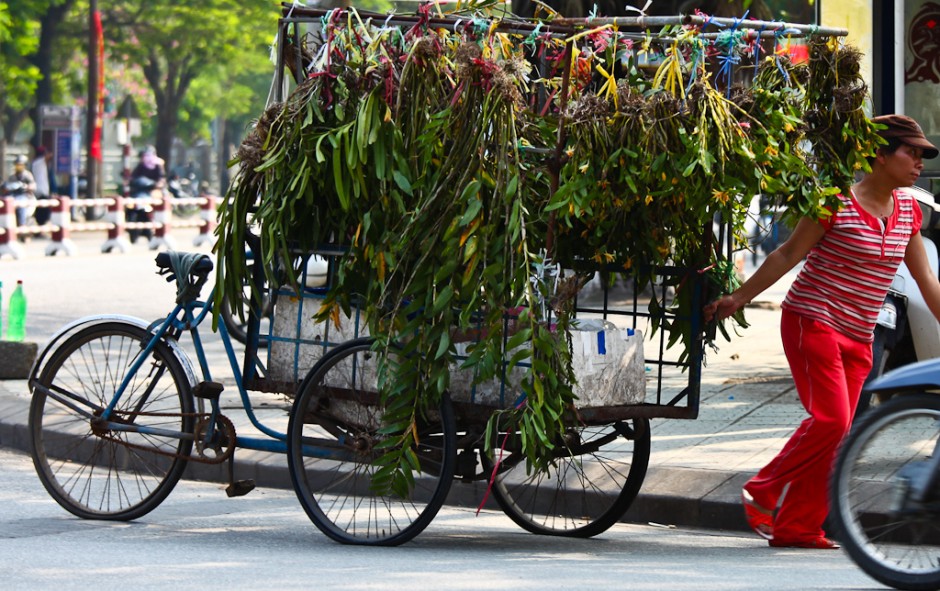 This cyclo has been adjusted to carry loads of bouquets to the Dong Ba Market. We didn't see much cargo like this in our month or so in the city, and we weren't sure what these branches were for....perhaps one of the dozens of ancestor temples around Hue.

While we were having some spring rolls and a drink out of the heat, we saw these men ride past the restaurant, transporting a full bedroom suite down the middle of a major road. My wife wondered how much they charge.... It'd be cheaper than movers in Sydney, that's for sure. 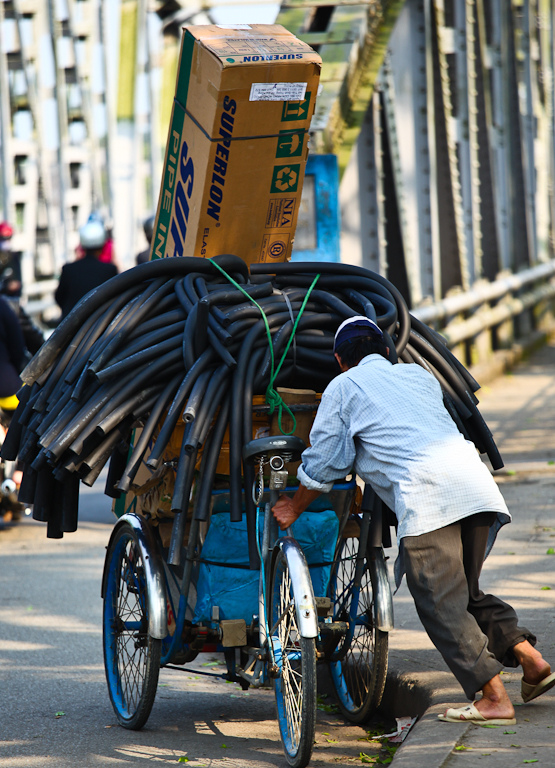 This man had stopped for a bathroom break and is seen here trying to get his oversized load going again as he crosses the bridge, which is an ideal place to spot strange transport sights. Large amounts of Hue traffic go over the two bridges that join the old and new areas of the city. 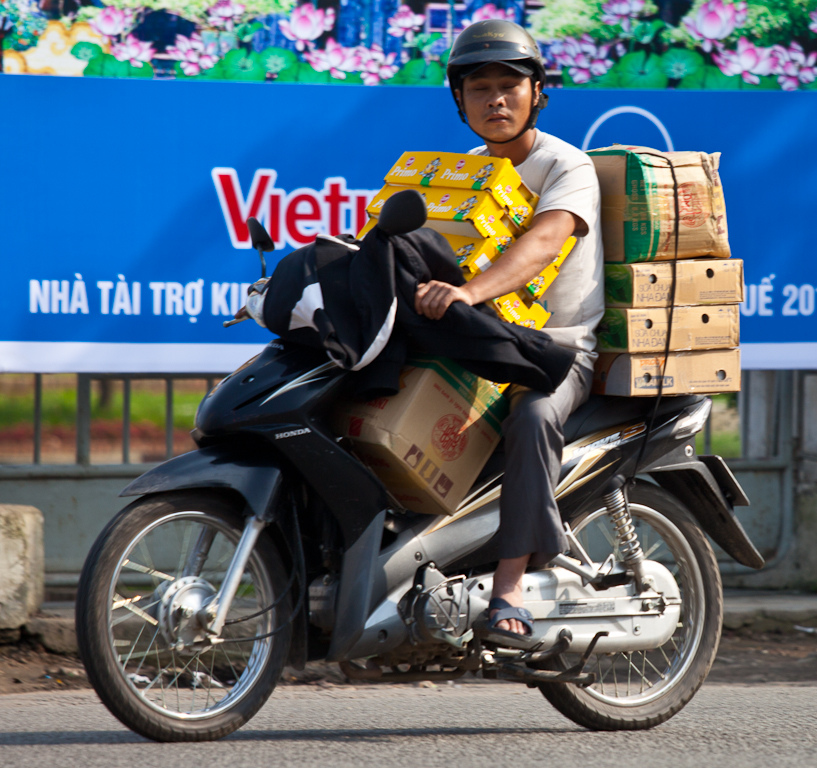 We rented two different motorbikes while in Hue so that we could visit the beach. I can't imagine taking more than a passenger and a backpack. This guy makes it look easy as he transports bulky items through a busy intersection.

Tagged
Vietnam
What did you think of this story?
Meh
Good
Awesome