BY THE TIME the Mekong River reaches Vietnam, it has already undergone multiple personality changes.

The Chinese call it the Turbulent River. The Lao and Thai know it as Mother Water. In Vietnam it is Cuu Long – the Nine Dragons.

From the turbulence of creation, a mother appears, whose belly swells into the Mekong Delta, before giving birth to her nine dragons.

The dragons are the mouths of the river, although it would take a very old map to see where the number nine came from.

It isn’t just nature – the river’s flow and monsoon rain – that keeps the area evolving. It is seriously affected by the building of dams in countries upriver. Earlier this year, the Mekong Delta experienced its worst drought in 90 years.

I set out to meet the multiple personalities that call this region home. Here is a snapshot of life in the Mekong Delta. 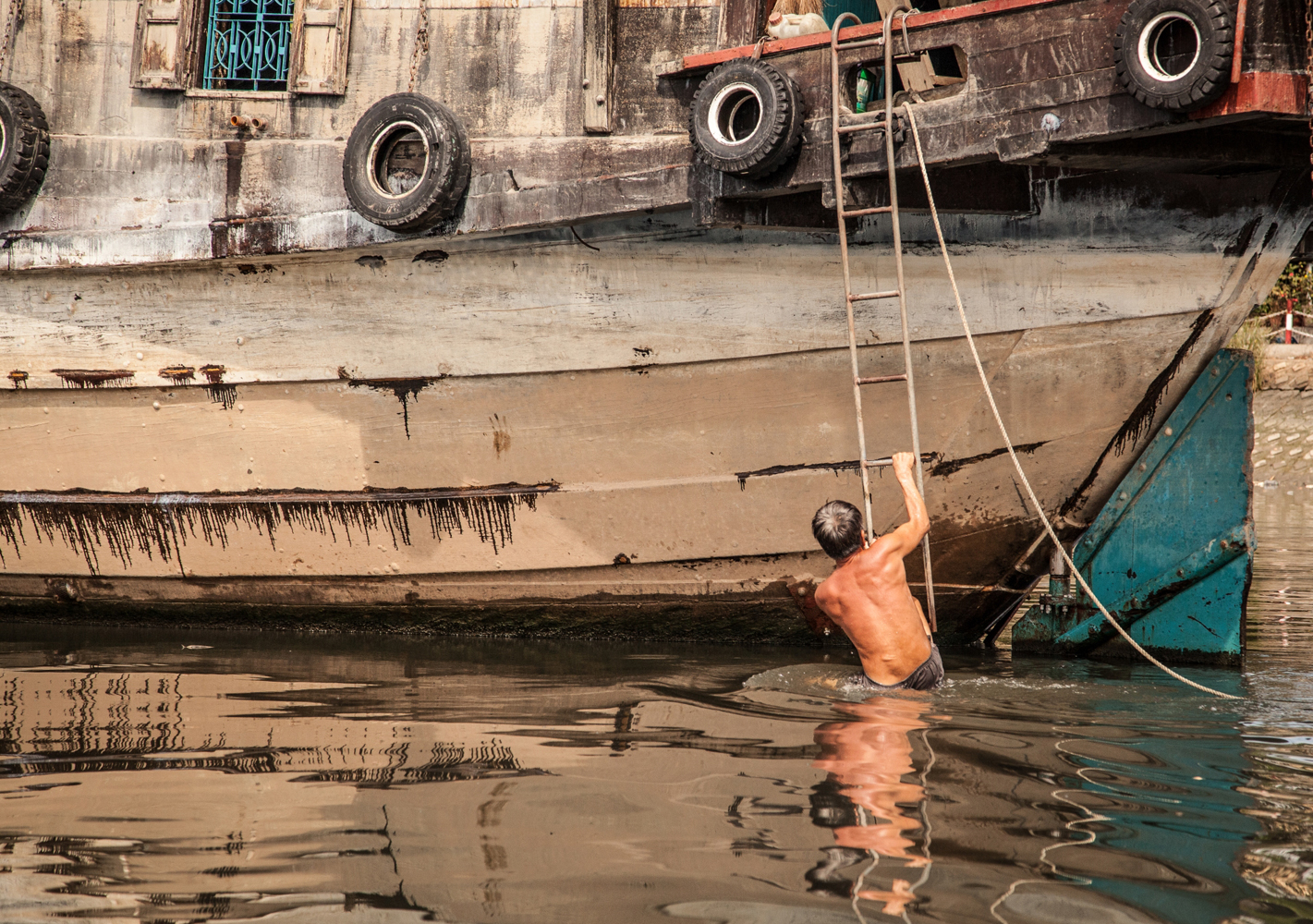 Climbing aboard a moored river barge.

I left Ho Chi Minh City by boat. Skyscrapers soon gave way to wooden shacks, then shacks to lush palms along the banks of the Saigon River. Barges chugged away against the river’s flow, dangerously overloaded with sand, back towards the city. I was struck by the close relationship between the river and the people living along its banks, despite it being badly polluted. Children entered the water to swim and wash; the same water that renders the flesh of the fish beneath its surface inedible. 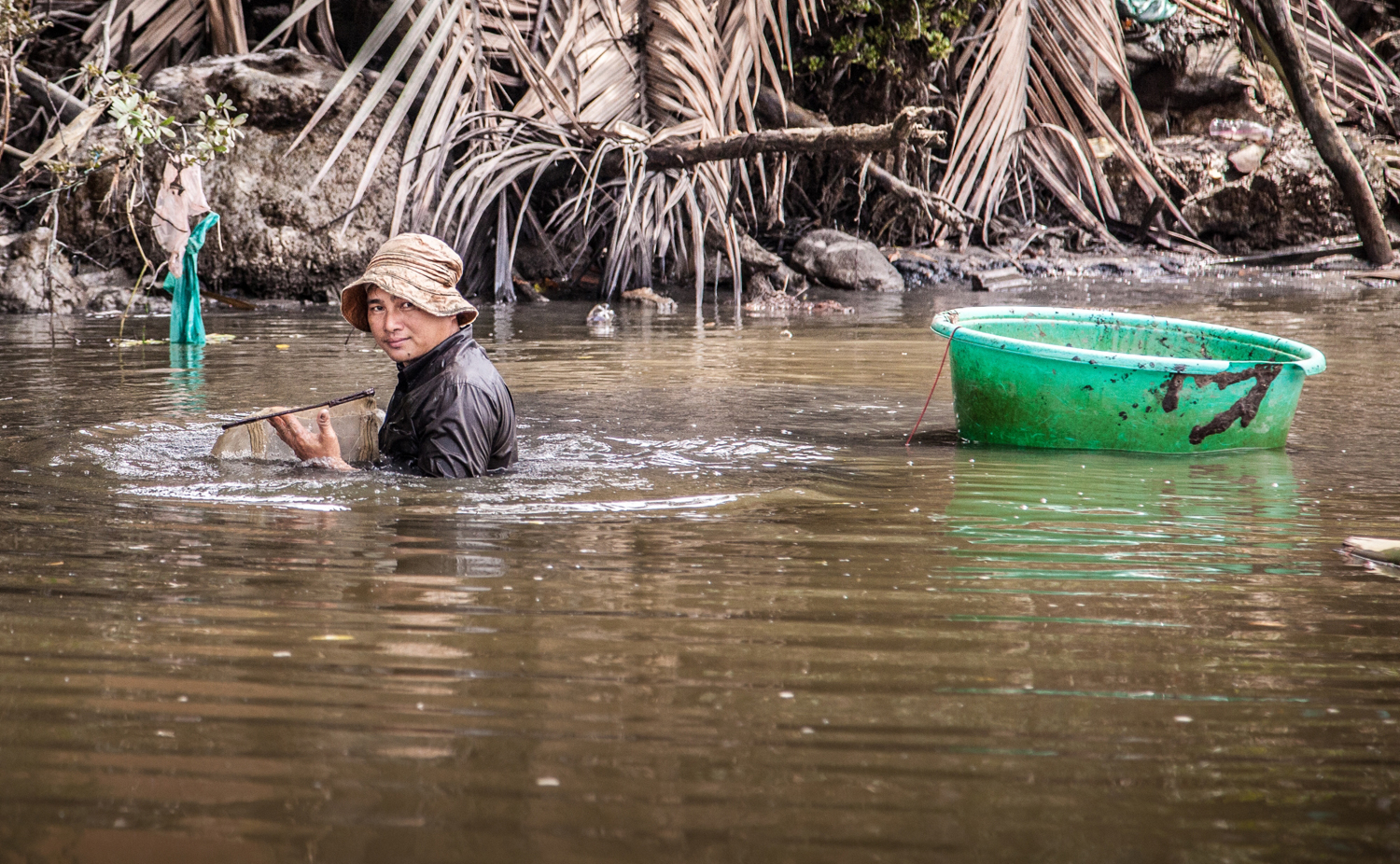 Before my boat turned off the Saigon River into the waterways of the Mekong Delta, I saw this man submerged up to his chest. He was digging the riverbed to harvest blood worms. He risked stepping on used needles, or contracting waterborne parasites, one of which is known to cause lifelong impotency. I wondered why someone would put themselves through such risks. The answer was financial gain, with a day’s catch of blood worms netting four times the regular wage in the area. 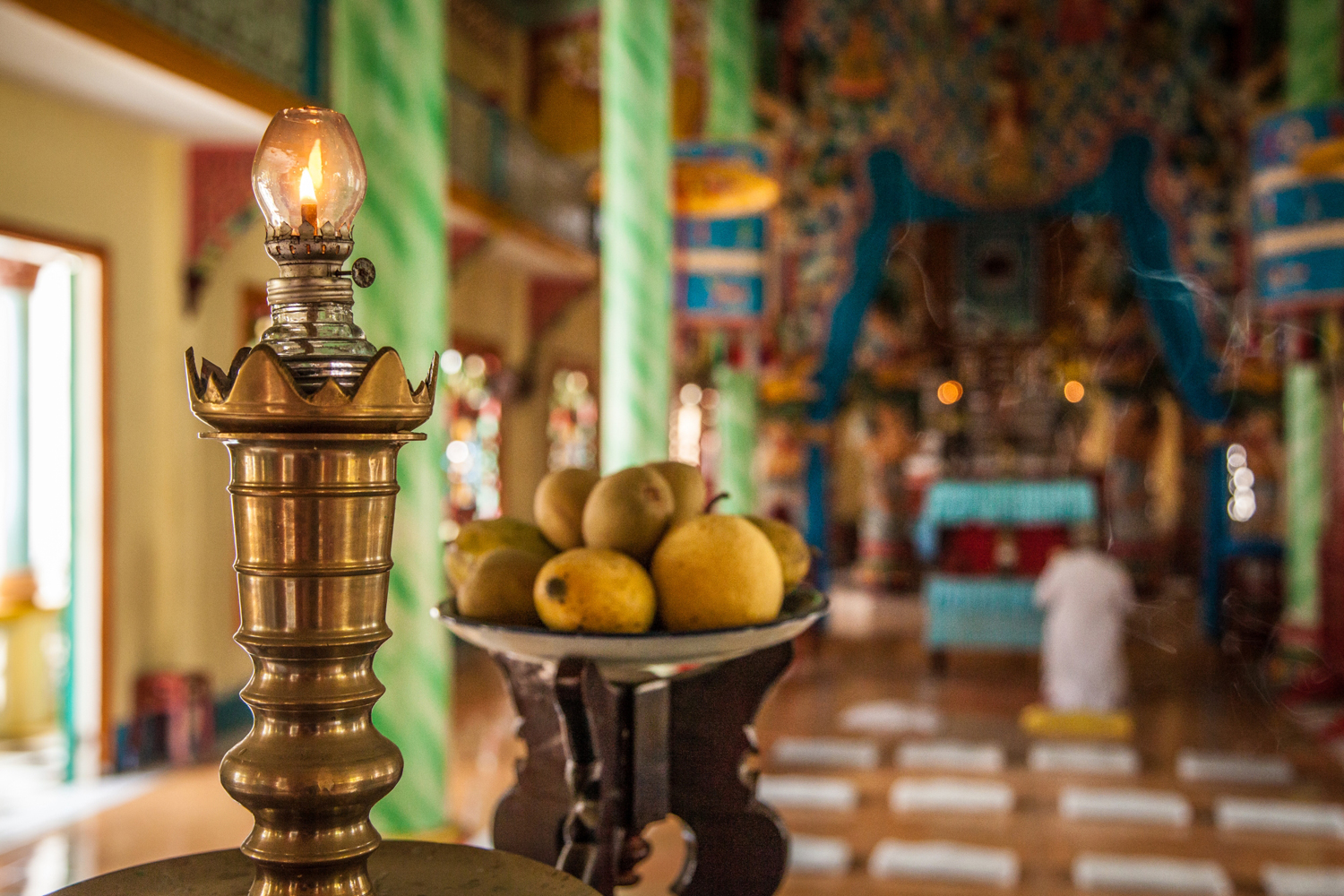 Sweet incense smoke drifted up towards the ceiling of this Cao Dai temple, drawing my eyes towards eight busts. Side by side were Buddha, Jesus and Confucius. Other figures venerated by the followers of Cao Dai – a Vietnamese religion founded in 1926 – include Muhammad, Joan of Arc, Julius Caesar and Victor Hugo. I found it a welcome relief from the sectarianism dominating the news. 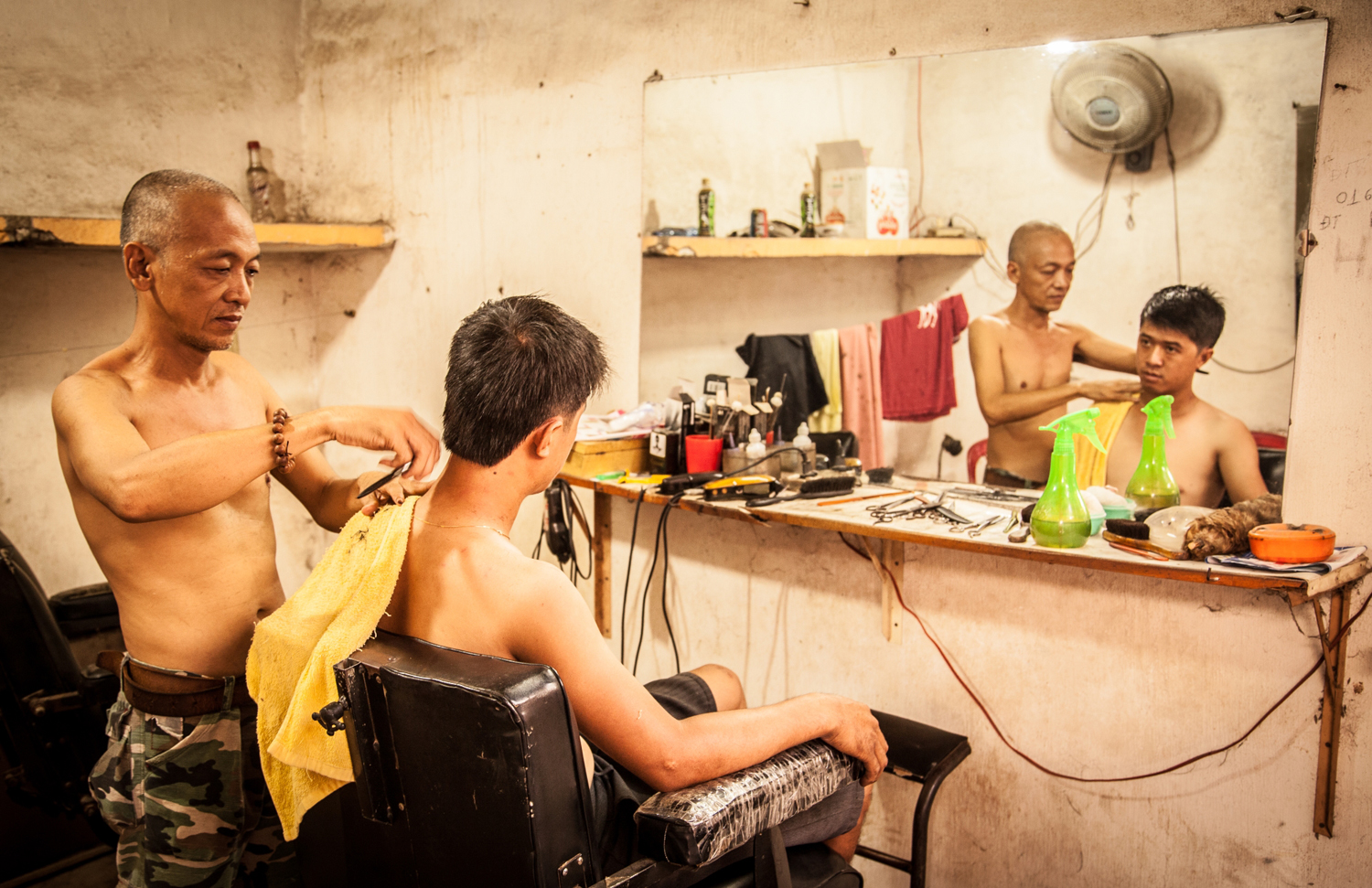 Getting an inexpensive haircut is an experience that I often seek out when visiting a new country. I learn something of the value of money and customer service in that society – and it usually leads to interesting human exchanges, as we smile and attempt to communicate. With the man’s shirt removed, it felt like a vulnerable moment, but he only looked proud when I showed him the image. 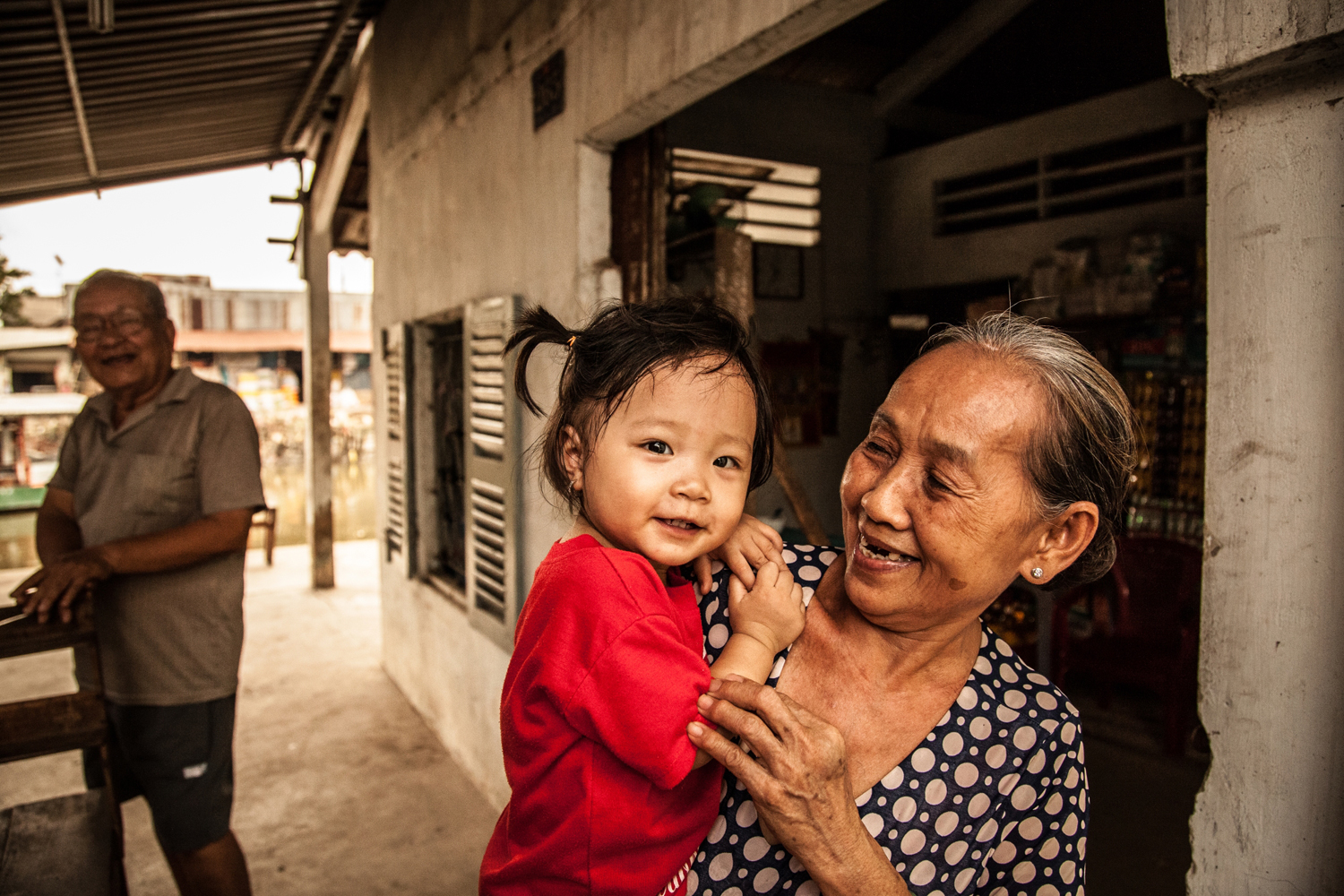 From north to south, I noticed a recurring sight in rural Vietnam; a grandparent cradles a young child while the parents are away working in markets or fields. Little Hao (4) buried her head into her grandma’s shoulder, then turned around and burst out with a huge smile, just as I was beginning to lower my camera. 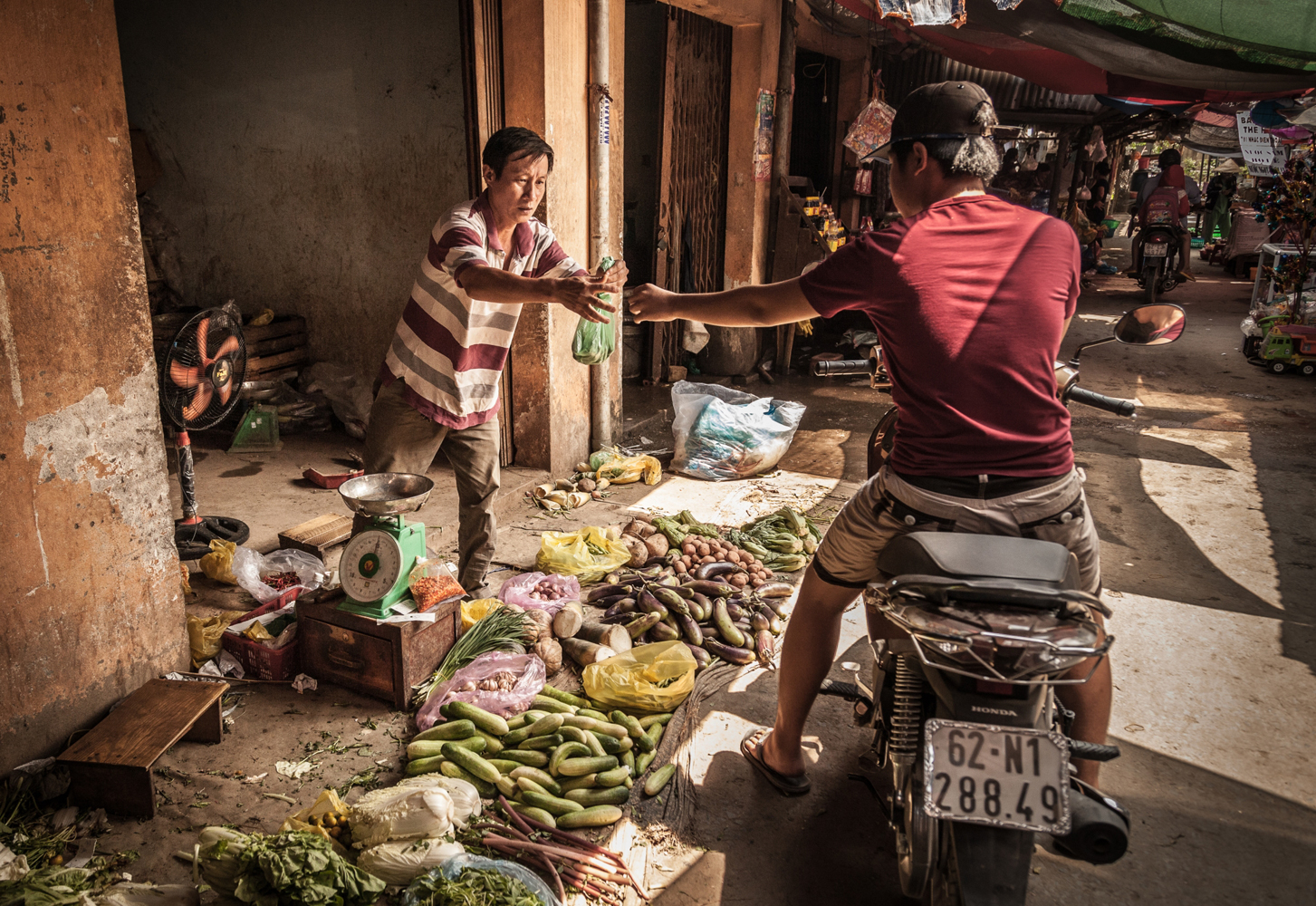 Vietnamese take on the drive-thru.

I was privileged to find myself in a village that rarely sees outside visitors. People smiled and greeted us or just carried on with their daily business. I witnessed this convenient way to shop. The scooter is king in Vietnam, thanks to its affordability, combined with high taxes on purchasing cars. A new car regularly costs twice as much as the same model in another country. 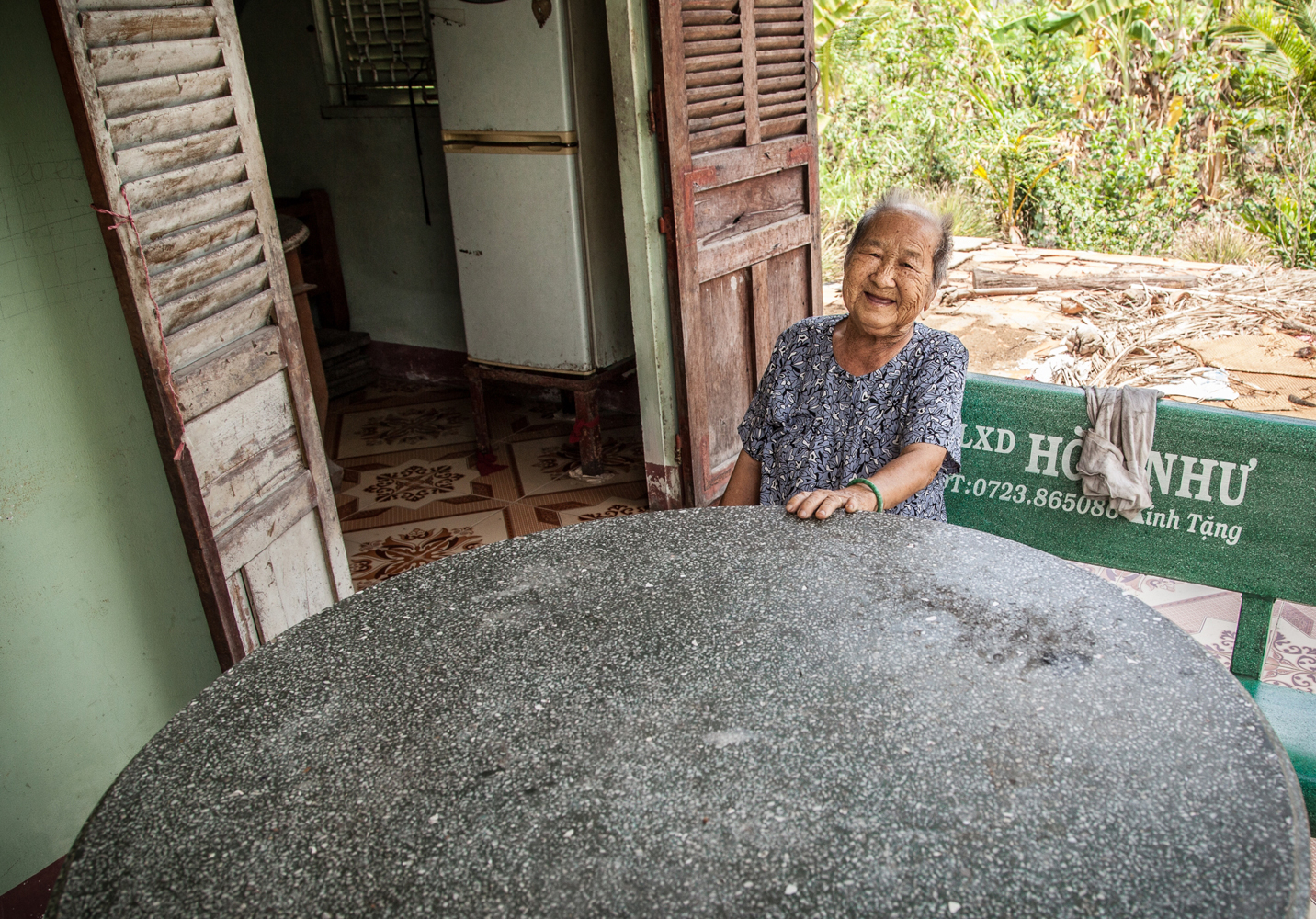 Her name was Miss Fifth. I learned that in the local culture, it is considered extremely rude to ask the name of someone older. Out of respect, elders are addressed with a salutation, followed by the position that they were born out of their siblings. She had an impressive energy about her at the age of 87, and the conversation found its way to her tips for longevity. Laughing, she said “I thank never getting married and never having children.” 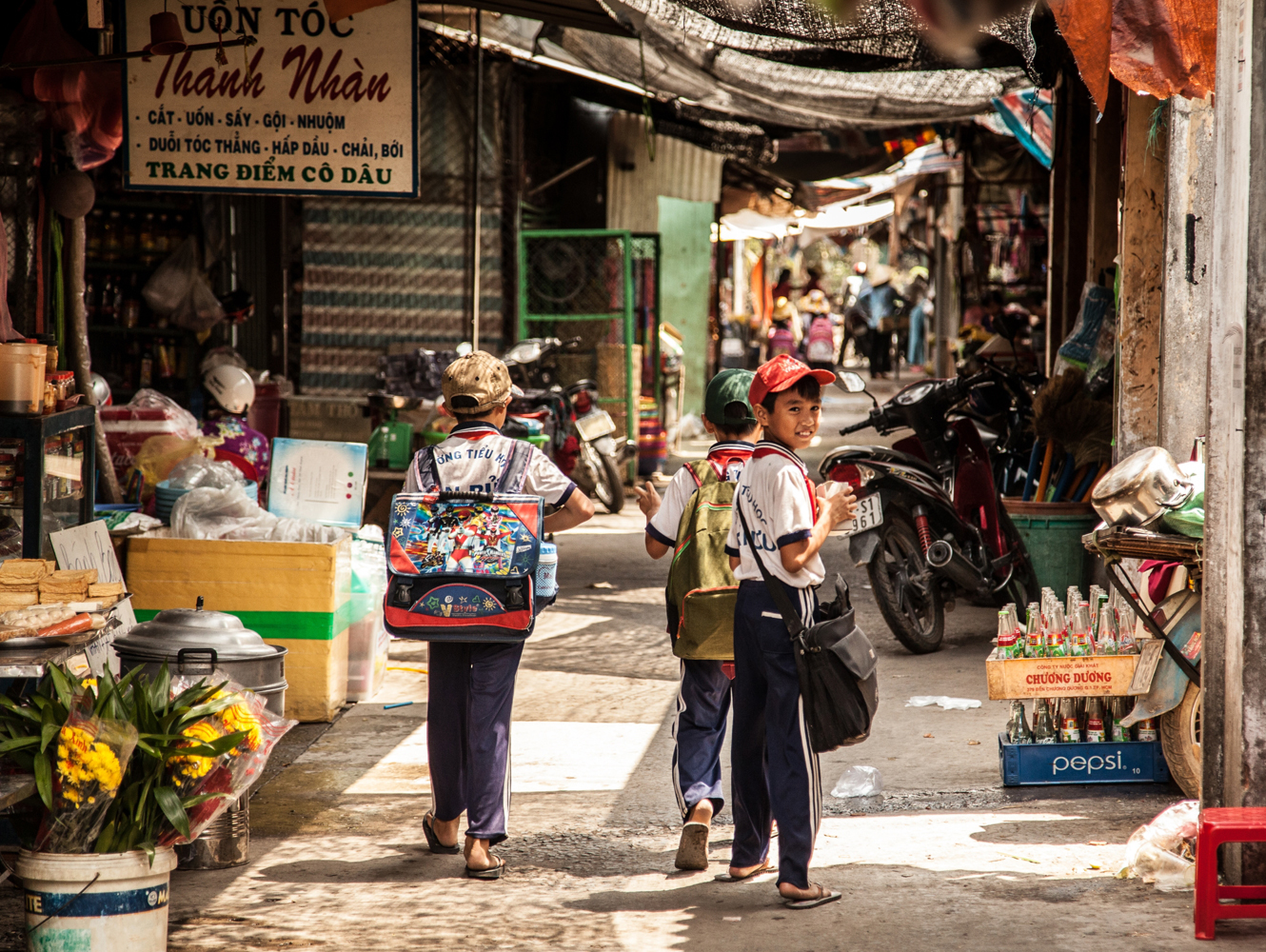 Schoolboy looks back at some unfamiliar faces in his village.

On his way to school, one curious boy turned back to look at the visitors walking through his village’s market. I felt a mutual realization that each of us was an interesting sight to the other. In my experience, this feeling of mutual exchange, that both the photographer’s and subject’s day was made better by meeting, is what makes photography in rural Vietnam so rewarding. 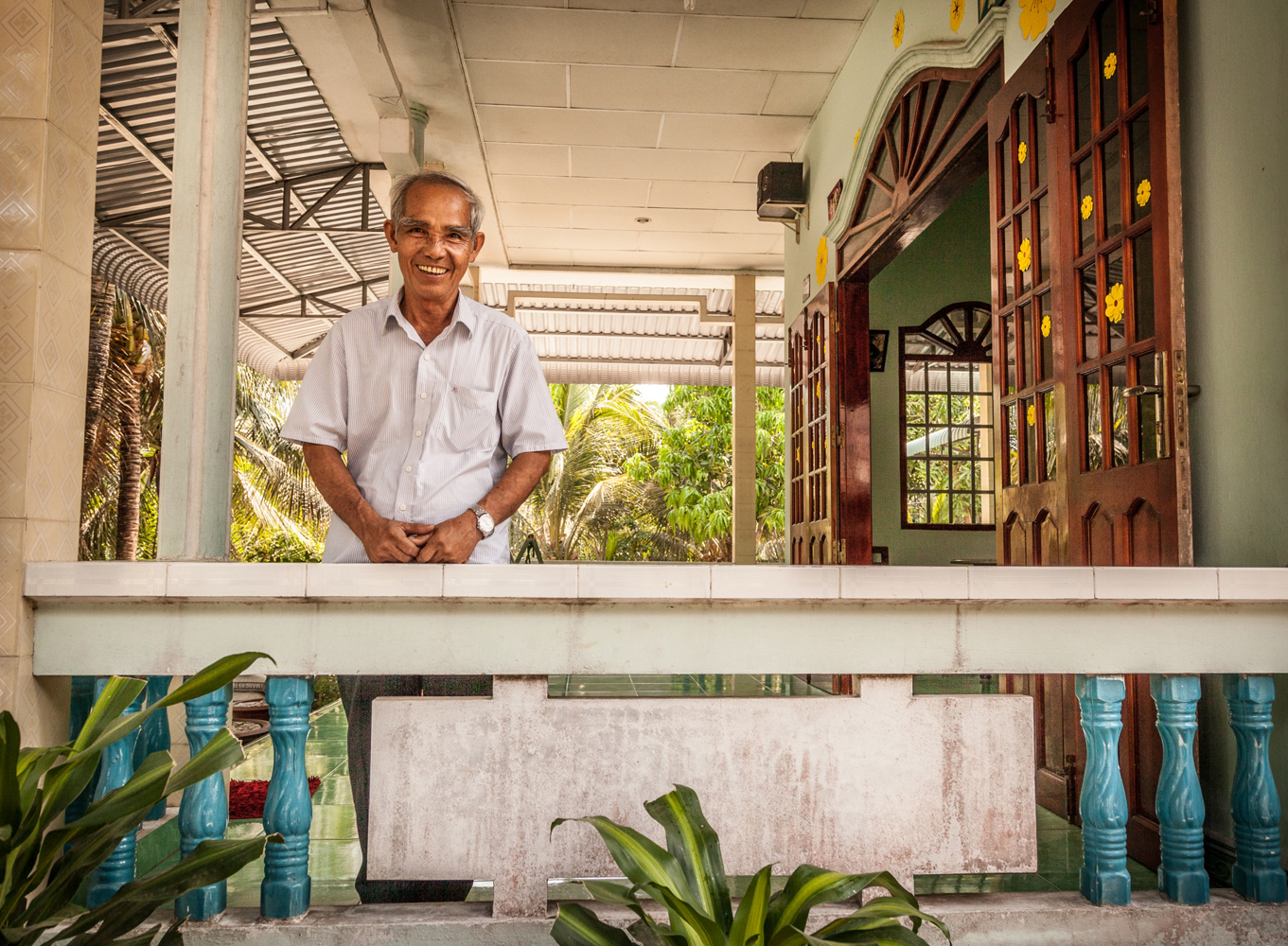 Brewer of the meanest banana rice whisky in the Delta.

This man’s respectful moniker was Uncle Six. His large property overlooked his farmland which, due to the drought, was not the lush field – befitting of a region known as ‘Vietnam’s rice bowl’– that I had expected. “The water is salty for the first time in my life” he said as he topped up glasses of home-brewed banana rice whisky. On top of that, the rainy season was late to arrive. Uncle Six lost a lot of his crops this year, but seemed steadfast in his ability to find something positive to toast to. 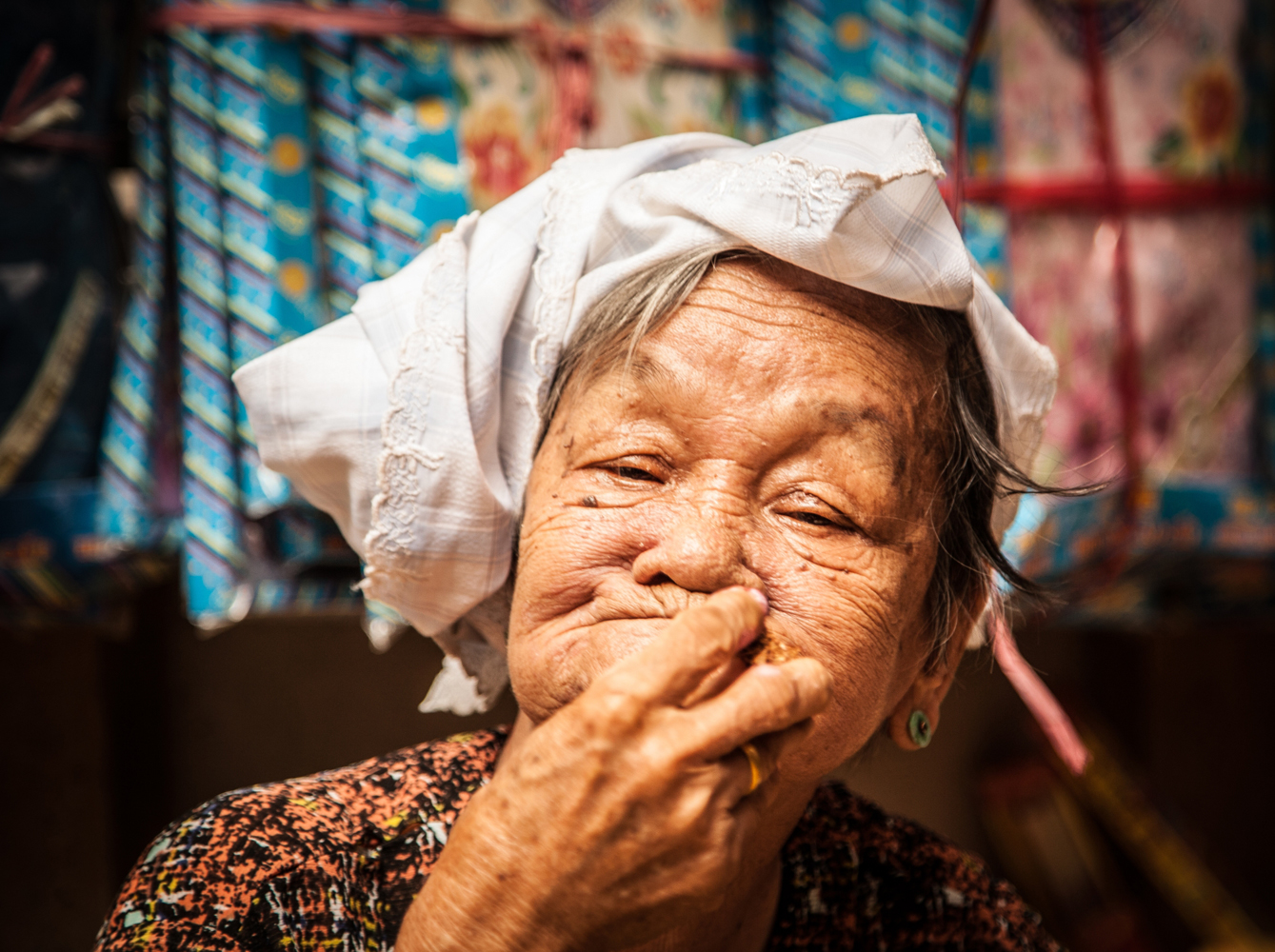 Ms. First owned a stall at the riverside market. She sold a diverse mix of goods; fresh eggs, funeral offerings, chewing tobacco and narcotic betel nuts. When it came to the last two products, she herself was a lifelong addict. Betel nuts are chewed or rubbed around the gums, providing a buzz akin to a mild amphetamine or a very strong coffee. Combined with chewing tobacco, its addictiveness soars. I was grateful when she invited me to photograph her routine. 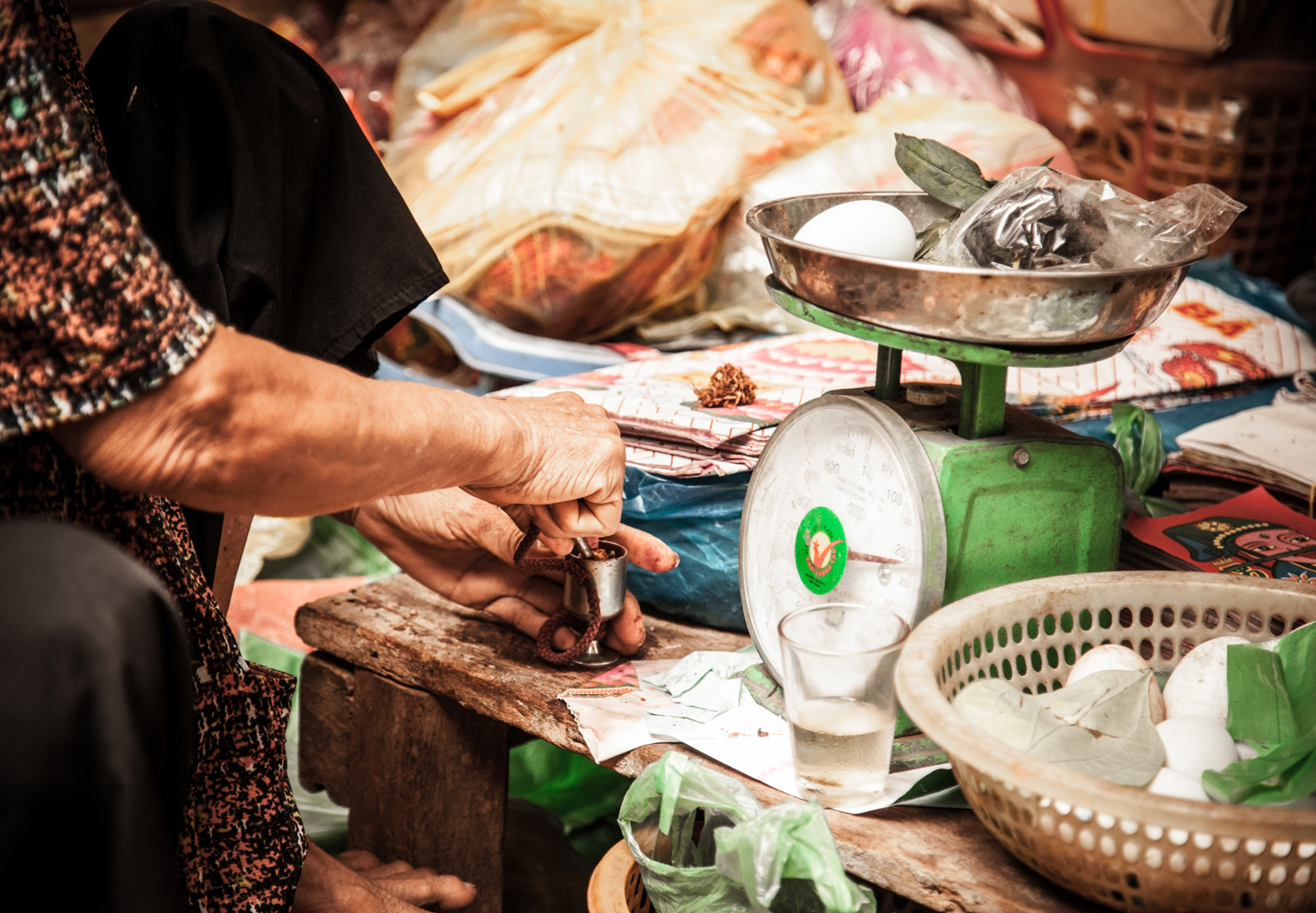 Ms. First preparing a mixture of betel nuts and tobacco.

I was fascinated by the funeral offerings that she sold. In the local culture, people leave offerings of food, drink and boxes of cigarettes at the grave. This tradition has evolved into leaving items related to the deceased person’s life, and sometimes their cause of death. To save money, gift packs of cardboard cut-outs are sold, instead of the real item. Ms. First sold cardboard shirts, cardboard cars, cardboard gold watches and cardboard iPhone 6s. 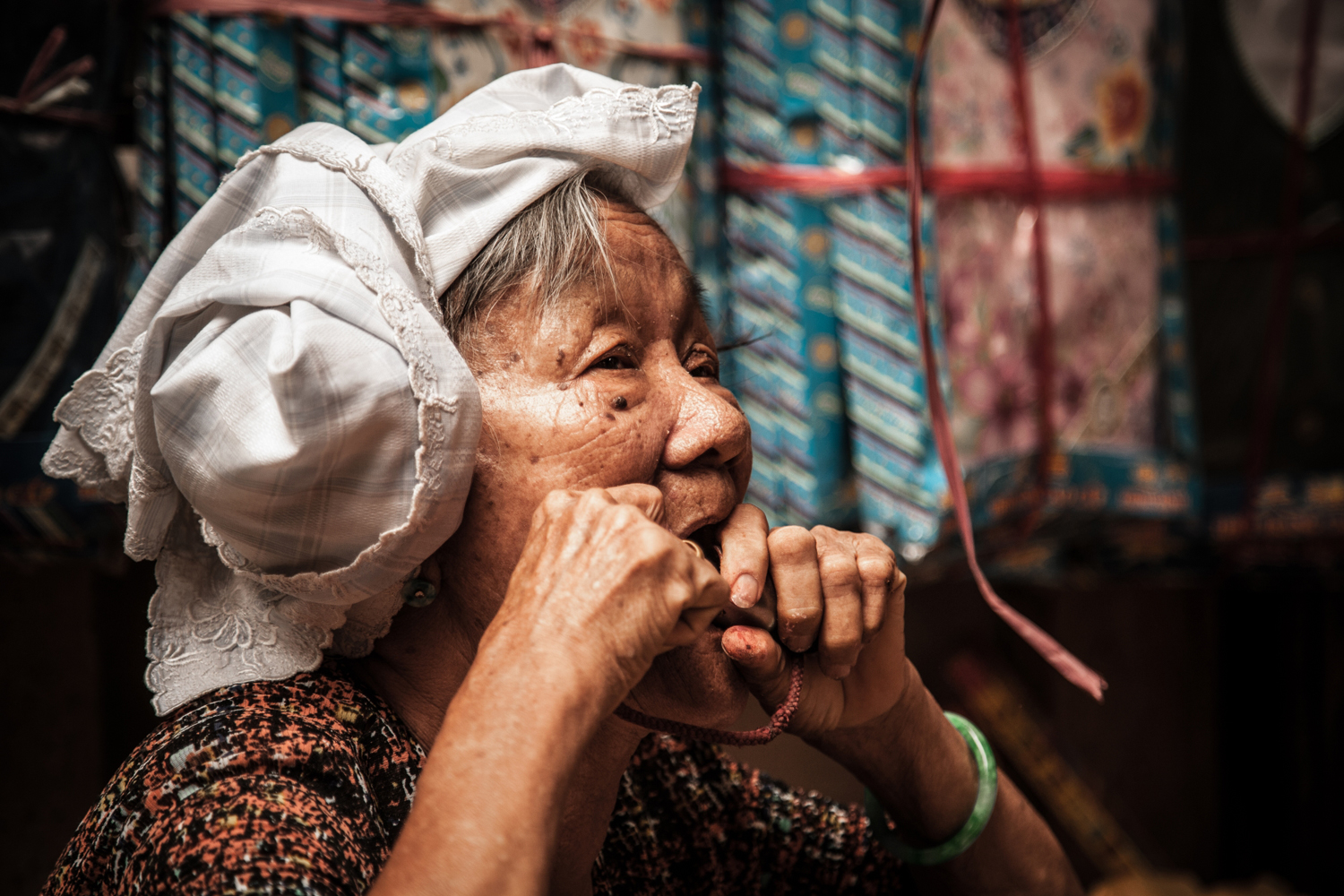 My local guide told me that he has warned her before about the risk of oral cancer that she is exposing herself to. Each time she laughs and says that she’ll never quit, waving his comments away with the flick of a skinny wrist. She then puts on a rebellious display of cooking up, before orally imbibing the brown concoction. I thought that smokers, or anyone who felt that their psychological crutch was under threat, might react similarly anywhere in the world. 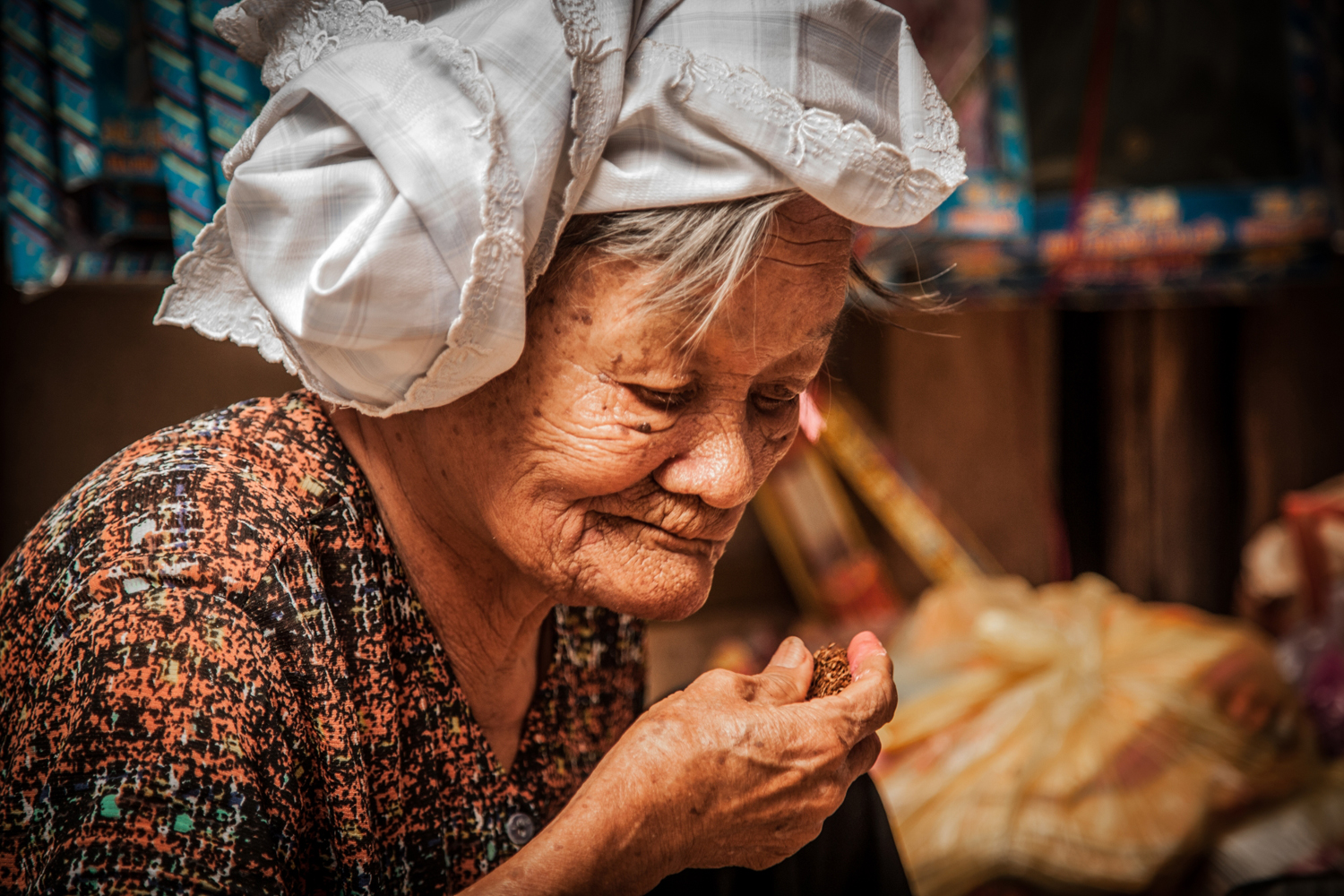 When I study her gaze here, half of me thinks that she has pondered before what these substances are doing to her. The other half sees a gaze that says “Hello, my old friend. We will always have each other.” Whatever she was thinking, I found that her addictions did not hold her back from being a very warm and open person. 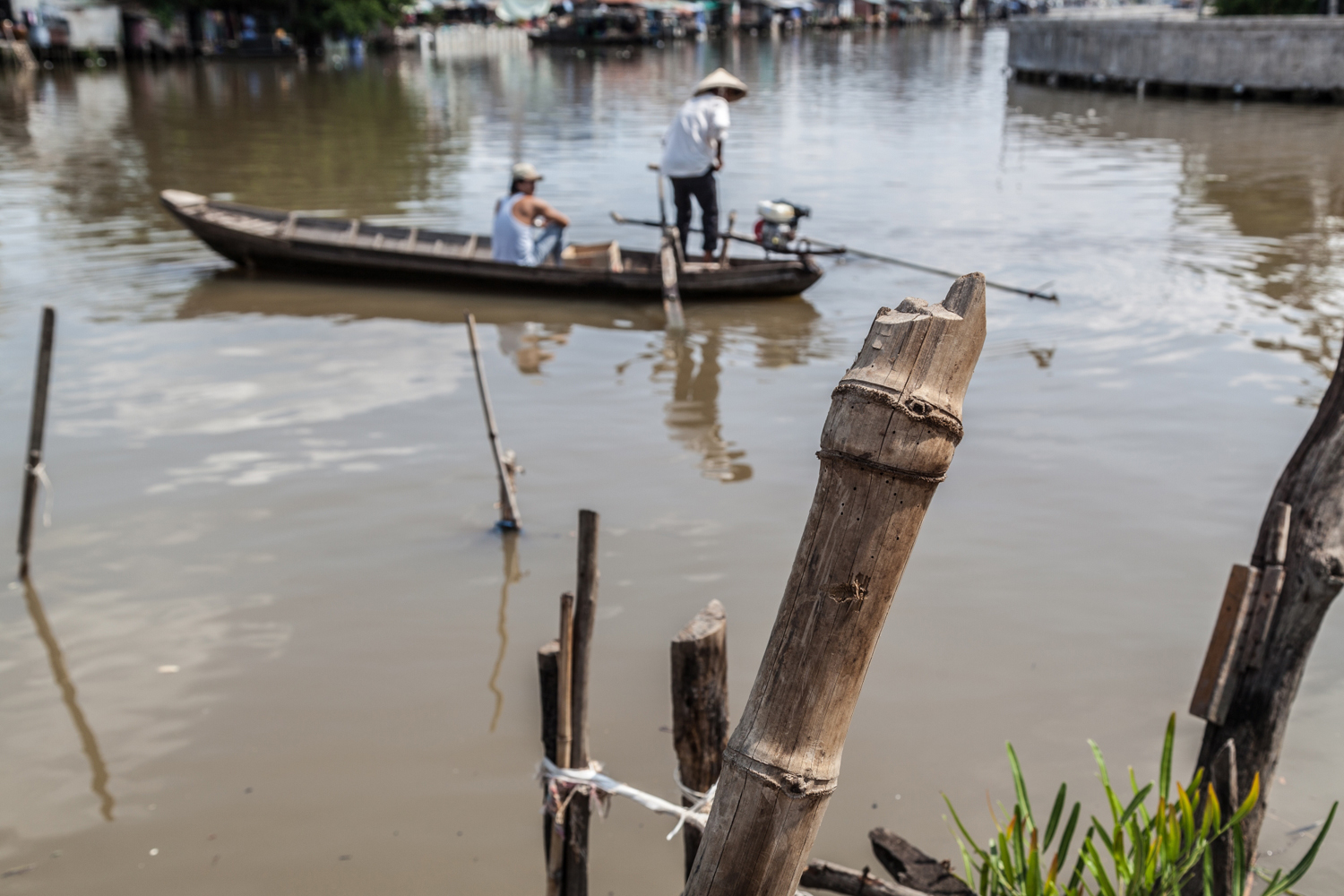 A passenger is ferried across the river near the home of Uncle Six.

On paper, the outlook is grim. Continued dam construction will ensure further droughts in the Mekong Delta. The Nine Dragons are far from the end of their evolutionary tale. I believe the people of the Delta will meet the challenges with the same indomitable spirit of positivity that I came to know in my time there. I find some reassurance in that, just as Ms. First finds reassurance in a pinch of sticky brown chewing tobacco.