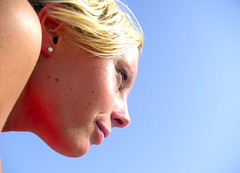 I KNOW I DID. Until I got a job that involved traveling alone every month, at which point I had to face the realities of being a single woman traveler.

I’ve had to use the men’s room more times than I can count. I’ve been proposed to by a stranger (thanks to a short skirt). I’ve even had to avoid another traveler whose psychopathic tendencies turned my friendly conversation into some sort of deep friendship.

But the point is that I’ve learned the hard way that when traveling alone, whether you are a woman, man or child, you have to be aware. Aware of culture and surroundings and how you are perceived by others.

Personal safety does not start with a bottle of pepper spray, it starts with being aware of your surroundings.

That being said, I am definitely not against letting go and having fun. Traveling alone has opened my eyes to so much, especially about myself.

It’s been invigorating, enlightening and so exciting. Which is why I would recommend it to anyone – along with my 7 travel tips for the single woman adventurer.

Some cultures find it an offensive, or even enticement, for women to wear short skirts, shorts or even bathing suits.

To prevent harassment and even physical violence, dress for the culture you are visiting. If in doubt take your cues from local women, who set the standard for what attire is acceptable.

2. Only use taxi from a registered taxi stand

Do not go off with men standing about saying their taxi is just over there (vague direction) and who say they will give you a discount. Be cautious and go with the registered taxi.

A whistle may cause just enough distraction to give you a chance to escape an unpleasant situation. Some countries may not allow certain safety devices, so again, know the standards of the country you are entering.

If you think you are being followed, check behind you in the reflection of a building, or duck into a nearby store till the person has passed you. Do not be afraid to ask for help, most people will be glad to lend a hand.

5. Do not tell strangers your travel plans

Strangers may not be as friendly as they first appear, so keep your travel plans to yourself. Also do not hitchhike in the dark or in unsafe circumstances.

6. Stick with a group

If you are feeling watched or followed while sitting in the airport or other public place, attach yourself to a family. Start talking to them, sit near them, befriend them.

You are harder to isolate when you are part of a group.

If you are in an unpleasant situation be calm and decisive. For extreme danger don’t hesitate to draw attention to yourself. Embarrassment isn’t as bad as the alternative.

Thinking clearly ahead of time and having a plan can go a long way toward forestalling lone traveler’s paranoia.

Miriam Anderson grew up in Egypt, and spent her vacations travelling to the Red Sea and the valley of the kings in Luxor. When she moved to Canada, the travel bug hit, and by 19 she was traveling on her own. Her favourite places are Morocco, Spain, Italy, Japan, Jordan, Germany, Lebanon and New York.
Tagged
Travel Safety
What did you think of this story?
Meh
Good
Awesome