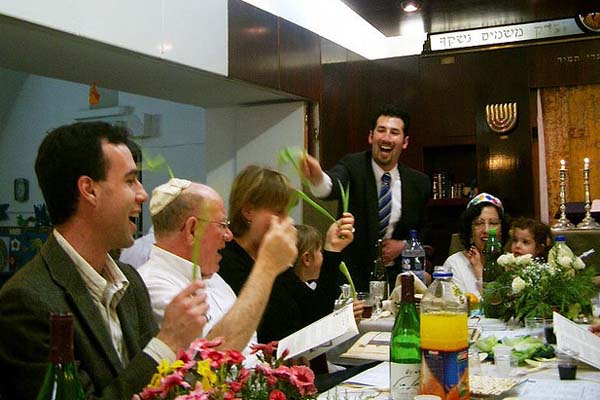 Robert Hirschfield reflects and contemplates on past Seders.

GIDEON STEIN, a Jewish painter friend, invited me to attend his Seder this year. I refused (my annual Seder invitation refusal), recalling the bitter herbs of my childhood.

Our tiny apartment in the Bronx was the traditional site of our family Seder. It was the only home our Hasidic grandfather would set foot in, as our mother was only slightly less devout than himself. He was from Poland, and gave us children taffies so ancient they looked as if they made the journey with Moses across the Sinai Desert.

Passover is about liberation. As the Haggadah (the booklet Jews read at the Seder) says, yesterday we were slaves in the land of Egypt, today we are free. As a backer of all progressive causes, Passover should be the one Jewish holiday I observe. But my psyche is still in bondage to memories of the yearly invasion of my home by relatives, friends of relatives, and family friends. They would all come to pay homage to the white-bearded patriarch.

That’s how I felt at the Seder: dry, flattened, and unable to rise.

I imagined that under his enormous skullcap every calamity that had befallen the Jewish people since the beginning of time was kept under lock and key.

My narrow bed was covered with the coats, buttocks, the shrill voices of our guests. On the Seder table were the flat, square, dry matzahs; the unleavened bread baked in such a hurry by the freed slaves it did not have time to rise.

That’s how I felt at the Seder: dry, flattened, and unable to rise. As the night wore on, and the songs sung by everyone grew weary, I caught something fleeting that I associated with Jewish survival. After all, was that not what I was trying to do all evening? Survive? Survive as an exile in my own home, rather than as a free lad in someone elses’s?

My favorite part of the Seder was when we opened the door for the prophet Elijah to enter. Elijah, the Messiah’s herald to Jews, would enter our home (and the home of every Seder-making family) invisibly, the way I wished all those present would have entered. I always fought to be the one to let Elijah in. If I ever attend another Seder, I want to enter like Elijah. That would let me get my sea legs back, help release me from my bondage.

We all have our deserts to cross.

A Tiny Town in the Adirondacks