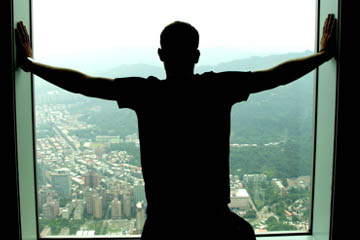 Observing the city below.

Sunday night, the band is still playing when I kiss my friends goodbye, climb into my car, deposit it in the underground parking of my parent’s apartment, and get dropped off at the airport approaching midnight.

My mom and dad are used to me coming and going. I might as well work at the airport.

The crew gathers for the 2am EVA Airlines flight to Taipei. There are six of us in total. With a slight shake-up of directors, these are the people I’ll be spending just about every waking moment with over the coming months.

Four of us are veterans of season one, which took us to 12 off-the-wall countries, including Venezuela, Ethiopia and Lithuania. We know the score of a life in motion.

My co-host is Julia Dimon, who writes a weekly travel column for METRO in Canada. We met in Turkey on my first trip around the world, and have become unlikely partners on this escapade. The fact that we are so different, as people and as writers, gives the show its appeal.

Shooting us is Sean Cable, a tall, shiny cameraman of legendary status within the industry. Although Sean is known as one of the best sports shooters going, he’s also an artist capable of capturing images that saucer the eyes.

Paul Vance (pronounced as one word, Paulvance) is our sound guy, our ears. He is born and raised in Whistler, and is therefore laid back to the point of horizontal. Chris Mennell is our production packhorse.

Nicknames abound, as they do on these kind of shows. Chris is called Chewie, although I confess I can’t remember why. He looks like a young Tom Berenger, and lives on an orchard in the B.C interior. Directing a couple episodes, including Taiwan is Jordan. He’s a former comedy writer, sharp with the wit.

I round out the crew. Esrock. Ing. The Free World.

Monday disappears, somewhere between jet lag hell and the international date line. I know very little about Taiwan, other than I once stopped here en-route to China, and spent a painful night at a golf resort.

Travel writers are notorious for becoming jaded bastards, but my unique journey to this unlikely career will hopefully keep me immune.

We arrive in Taipei at 5am, meet and greet, and breathe in the soup they call air over here. It’s already cracking 30C, the humidity sheening everyone with a flattering glow. Too early for traffic, we arrive sooner than expected at the Grand Hotel, billed as one of the world’s finest. It is.

Built in 1952 as the fledgling nation’s flagship hotel, it looks like a massive Chinese temple. We come to stay here because Taiwan’s Government Information Office is supporting our production, and we are all grateful for it.

It’s important for the production (and as travel writers) that Word Travels maintains its editorial independence, and does not sink into a tourist promotional video. But we love travel, and that love reflects in the show, and my writing. If something warrants negative observations, I say it.

Travel writers are notorious for becoming jaded bastards, but my unique journey to this unlikely career will hopefully keep me immune. Meanwhile if tourism boards offer to support us, who I am to say no? Admittedly, this is not backpacking, but does that make the experience any less authentic?

Some of you might argue yes, or no, but that is a debate for another time. When you live out of a backpack in perpetual motion, you appreciate being treated in style, and when you’re filming a TV show, you appreciate all the help you can get. 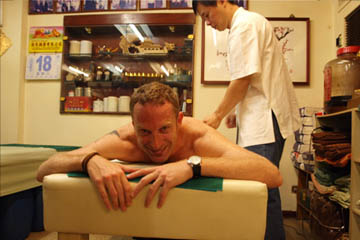 Ready to be set on fire by Master Hsieh Ching-long.

For our Word Travels in Taiwan episode, I am here to meet Master Hsieh Ching-long, the creator of Fire Therapy. It’s a hot story, allowing me to understand what a steak feels like when thrown on a grill.

Using open flame, Master Hsieh (pronounced Shay) realigns the energy in your body, healing muscle ailments and sports injuries. Judging by the polaroids of the Master posing with dozens of local celebrities, the hour-long treatment seems to work.

First he applied cupping, using heat suction to massage the airplane-seat out my back. Then he had me lie down, pasted my back in a thick gooey mixture of herbs, covered me with a towel, doused me with alcohol, and set me on fire.

What does it feel like to be lit up like a BBQ? It feels warm, in a pleasant sort of way.

I was more nervous of the other polaroids on display in the small clinic, depicting people’s reactions to the treatment. Some of them looked like well-done steak.

The clinic is suffused with the smell of various Chinese herbs, and Master Hsieh oozes confidence – important qualities in a doctor that literally plays with fire. He looks like Jet-Li, and developed his practice after years of martial arts, and a stint in Beijing.

To prove his inner strength, he rips an apple with his bare hands, and then hands me a sledgehammer.

To prove his inner strength, he rips an apple with his bare hands, and then hands me a sledgehammer. Sandwiching his hand beneath two bricks, he asks me to smash the top brick over his hand. Who am I to argue?

My first swing breaks the brick over his hand, but does not transfer the energy to break the bottom brick. Master Hsieh wants me to giv’er. So I take another swing to the replacement brick, which shatters over his hand, the sledgehammer ripping a piece of skin as it does so.

Now there’s blood, but Master Hsieh is determined to demonstrate his power, and his belief that I can actually pull off this stunt without killing him is flattering. Another swing, and thank God, the bottom brick crumbles. Scars and burns on his arms exhibit that the good fire doctor has had much practice honing his art.

“Now, for the dangerous part,” says Vic, the Master’s brother, acting as an able translator. This would involve me, an open flame, and the potential for Esrock Mignon. It’s amazing what one will do when there is a camera around.

Britney forgets her panties, I set myself on fire. To find out what happened, you’ll have to >wait for the show. Check out the full pics here.

Next time: Robin sorts out the difference between the two Republic of Chinas!