WINTER IN SIBERIA IS BRUTAL. For those who live in the frozen Russian tundra, winter is something you make it through. It is certainly not the time of year when you get most of your business done. Unless you’re a trucker. Thanks to the cold, many of Siberia’s rivers freeze up, meaning that trucks can drive along them and conduct trade. It’s an incredibly dangerous job, though — a crack in the ice could mean death for a trucker. Photographer Amos Chapple documented the life on one trucker over a 12-day period for Radio Free Europe / Radio Liberty.

Chapple accompanied driver Ruslan Dorochenkov, a 28-year-old father of two. The trucking runs pay well, and the trips take about 5 days each way, but it is a dangerous job. Here’s what they saw. 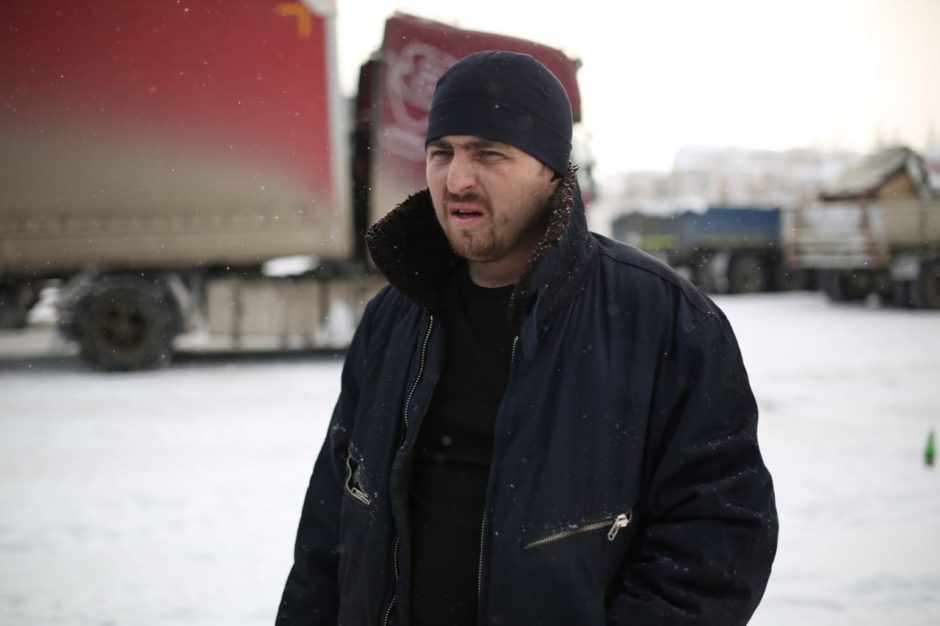 Ruslan Dorochenkov, a 28-year old truck driver who works on the ice roads in winter, then hunts Mammoth Tusks in the summer. All photos and captions are courtesy of Amos Chapple, and all pictures are reprinted with permission from Radio Free Europe / Radio Liberty. 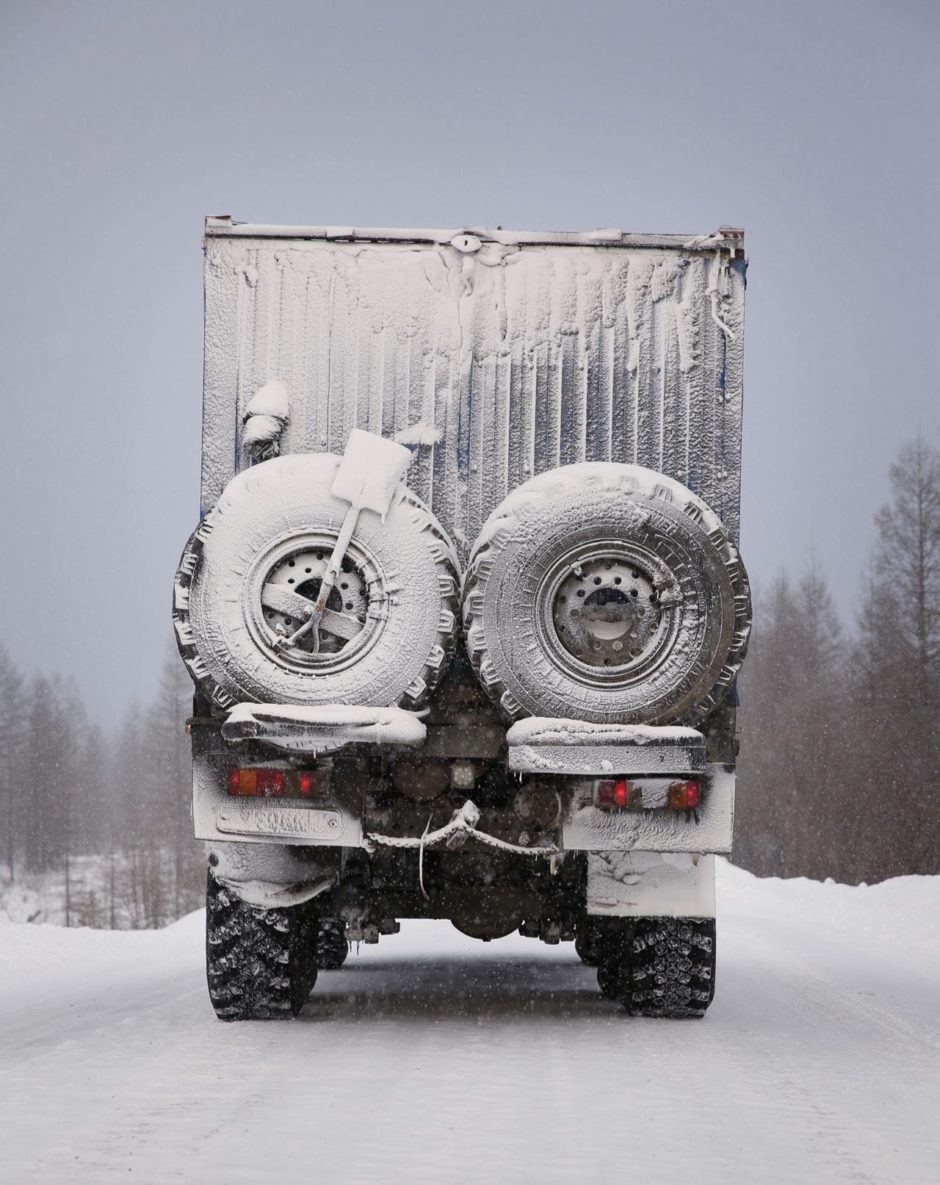 A truck in a blizzard.

Late spring is blizzard season in Yakutia but we were lucky only to be occasionally dusted with snow. 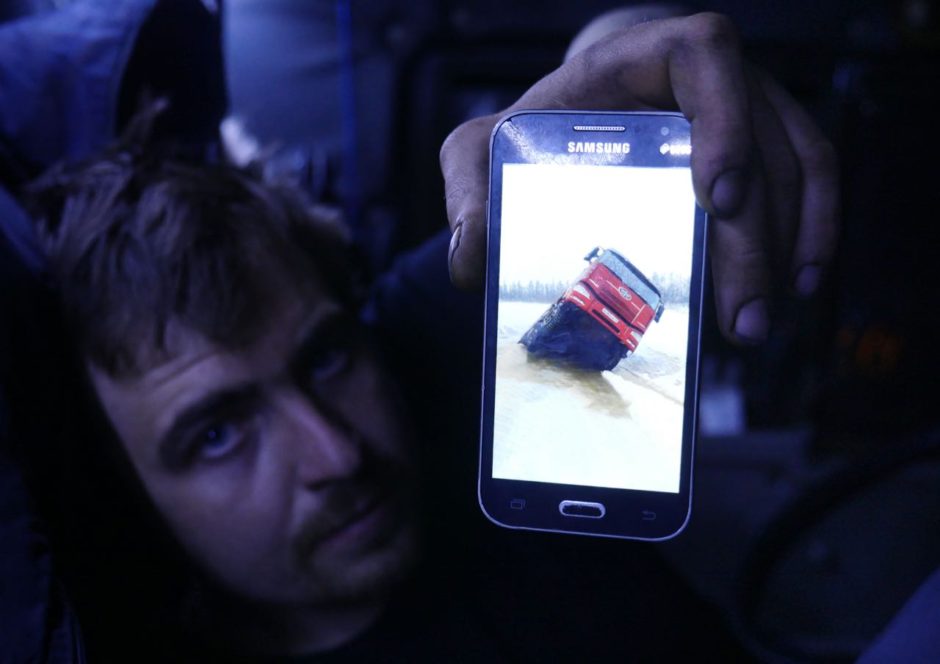 Ruslan with a picture of a colleagues truck which broke through the ice on a previous season. The driver of this was lucky and escaped without injury. Ruslan says "if your truck goes through nose first you're screwed." 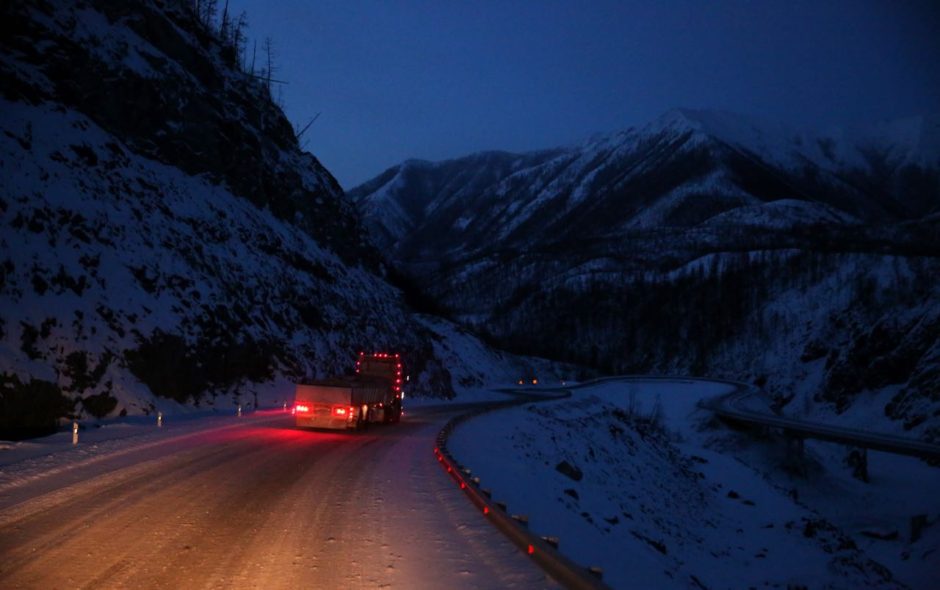 The Road of Bones

A truck heading through the Verkhoyansk mountains. The first half of the journey to Belaya Gora is along the Kolyma Highway, known as the "Road of Bones." 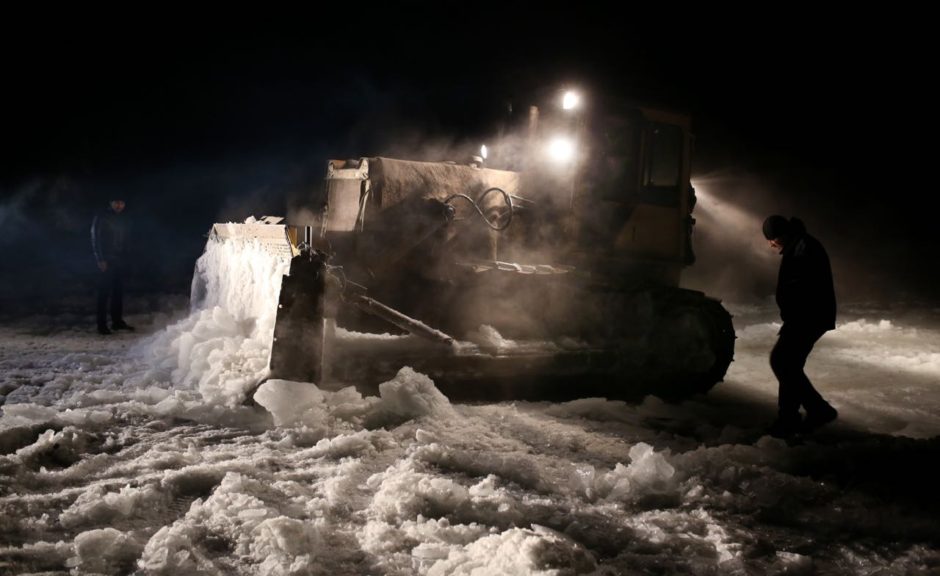 In the early hours of the morning we arrive at a wet section of road which looks impassable. Soon a bulldozer appears and scrapes a path for us through the slushy ice. 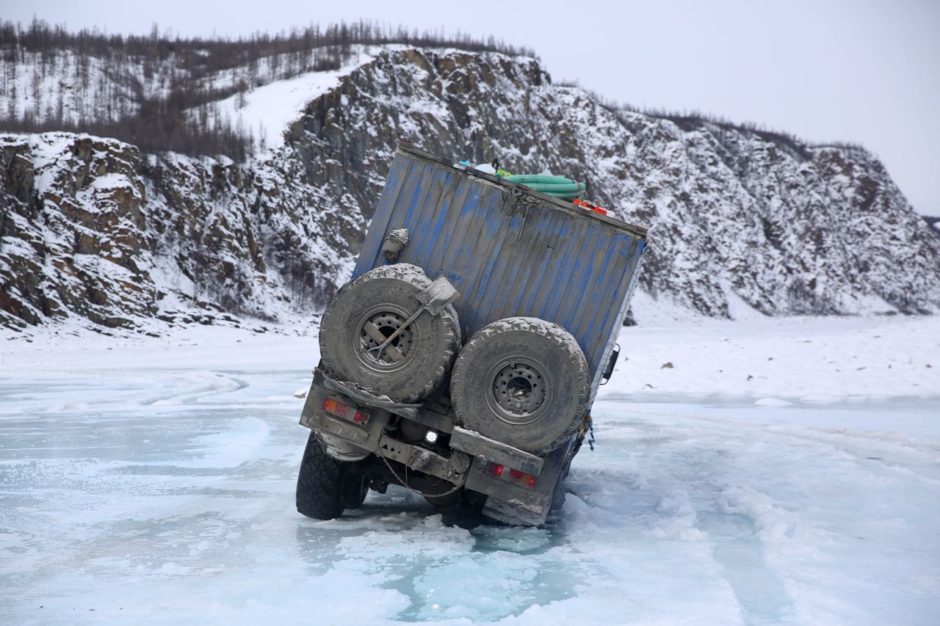 After seeing two places where trucks had recently plunged through the ice, we almost went through ourselves. After the chains were attached Ruslan managed to scrape back out of this situation and continue on. 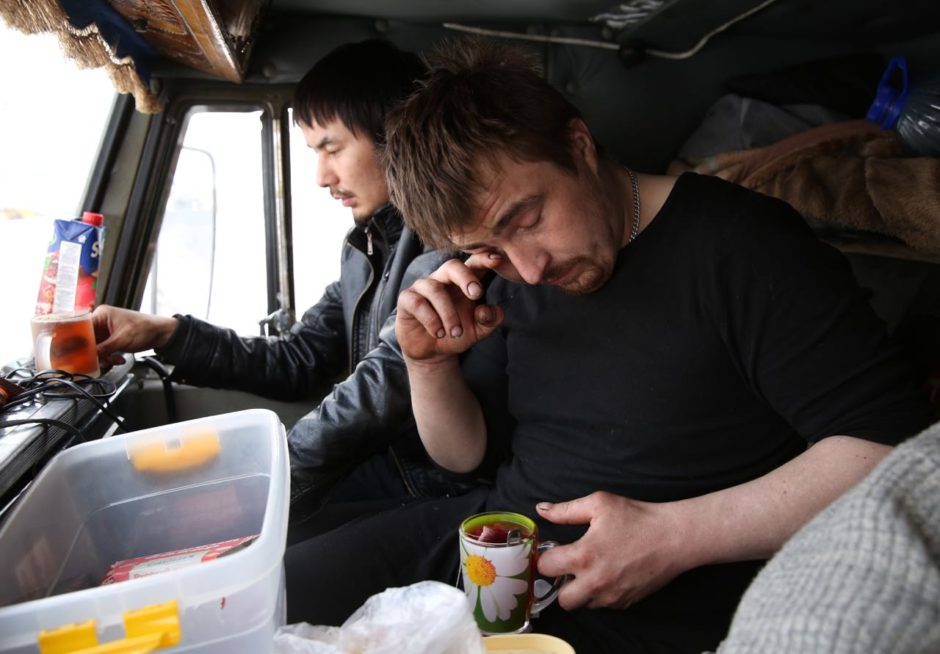 Ruslan looking bleary after a heavy night driving. As a freelancer he's not bound by labour laws and usually drives for around 14-16 hours per day. 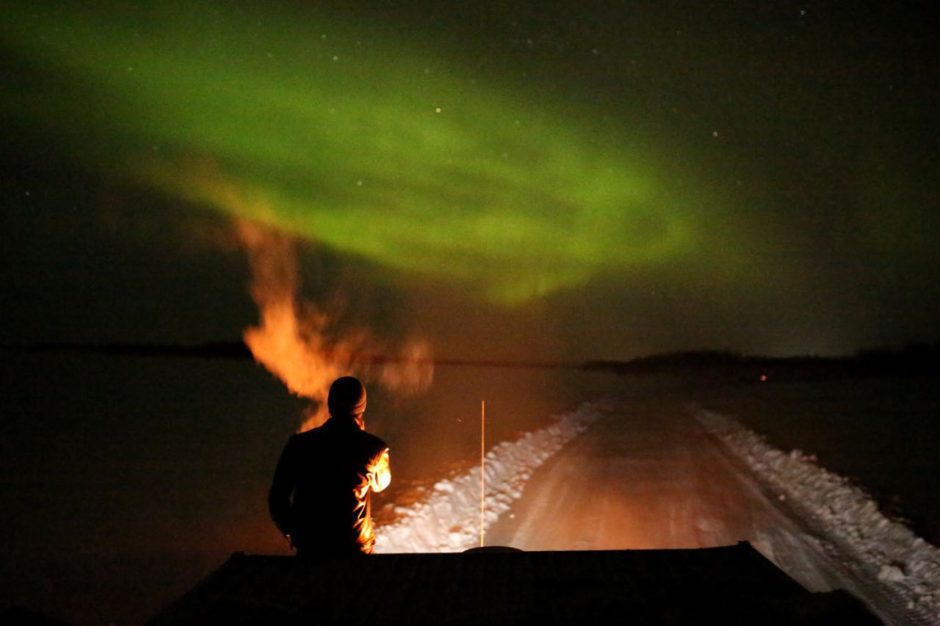 The northern lights, sparkling over the truck as we enter the Arctic circle. 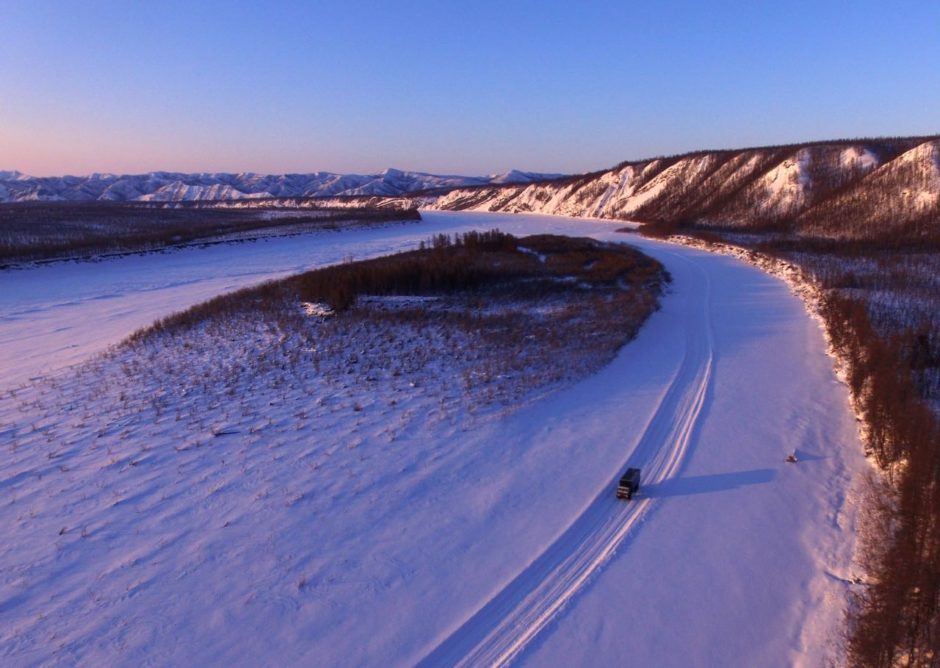 A broad sweep of the Indigirka river, close to the town of Belaya Gora. Despite the pristine landscape most drivers, including Ruslan, toss their trash out onto the ice. 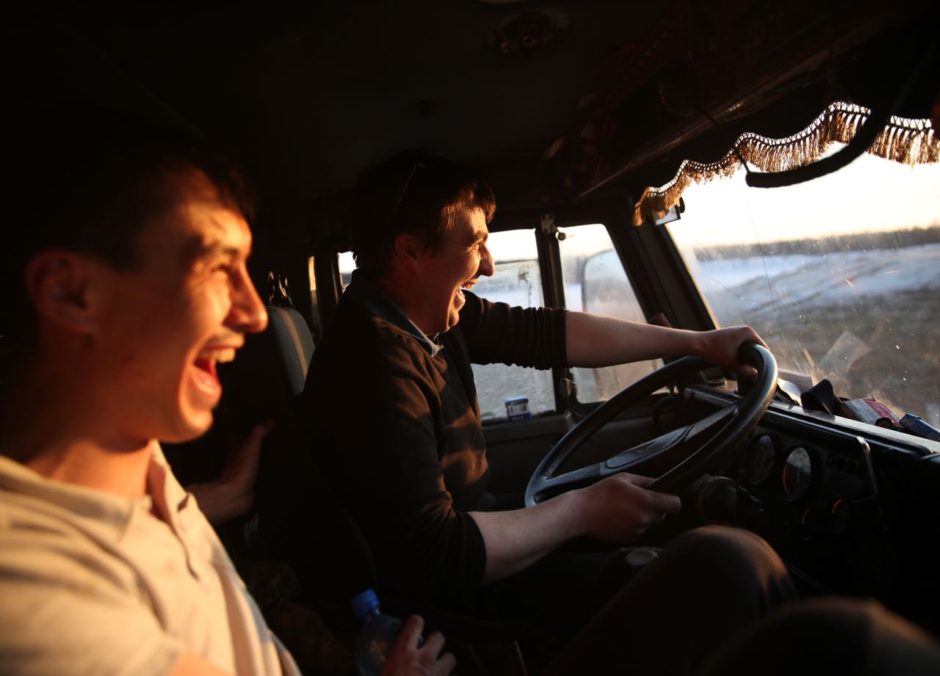 For more on Ruslan (and for more beautiful pictures), check out the original piece on Radio Free Europe / Radio Liberty.