ONE OF MY FAVORITE FILMS is Terrence Malick’s Badlands, in which a young outlaw persuades his girlfriend to join him on a crime spree across America. When I found out I was going to the Canadian Badlands in Alberta, the thought crossed my mind that although I was driving a silver 2012 Ford Focus (instead of a black 1950s Cadillac) and I was armed only with a camera, I was the lead in my own thriller.

For three days I drove the open roads over the plateaus, winding through the canyons, and taking in views of vast prairies of waving canola, hoodoos and buffalo jumps, abandoned coal mines and Wild West saloons. All photos by the author. 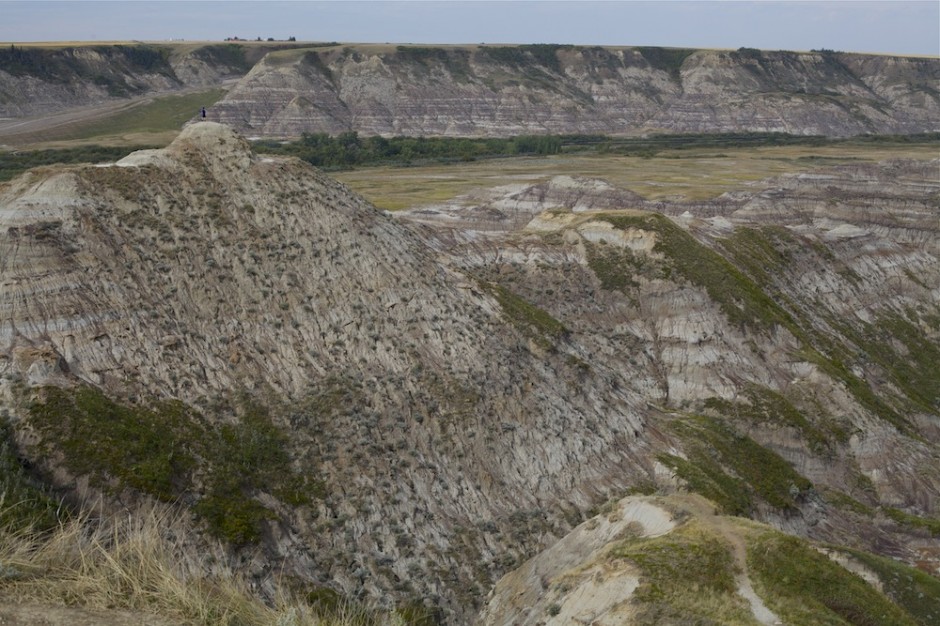 Cut from the mountain by ice more than 10,000 years ago, Horsethief Canyon’s cragginess deters most from leaving the comfort of their cars to explore, just like it deterred sheriffs from chasing rustlers into the valley below in the early 20th century. The thieves would go in with a branded horse, and come out with a mount sporting a fresh new brand, allowing them to sell the horse at market. 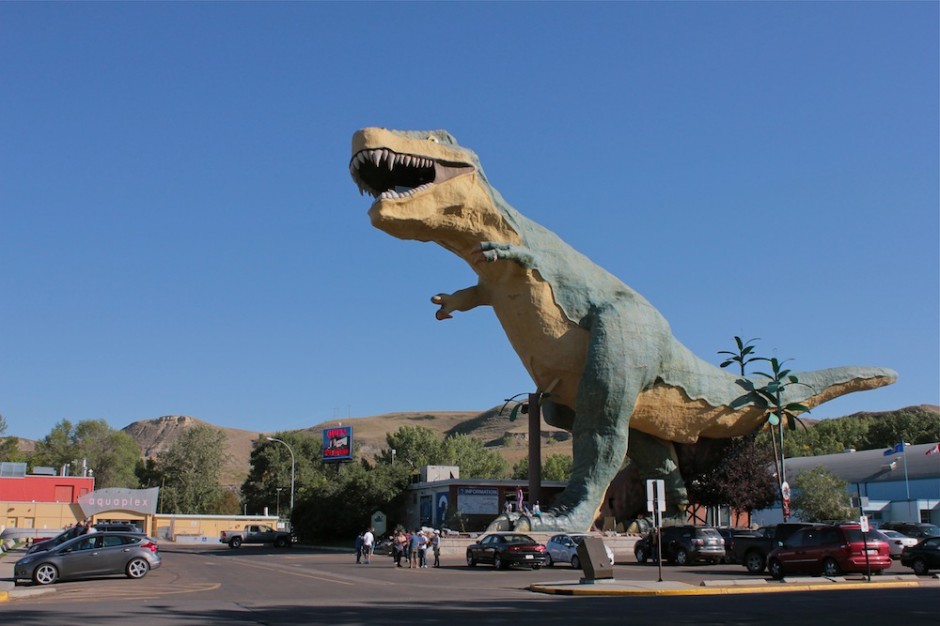 Once a coal mining capital, Drumheller’s claim to fame these days is its abundance of dinosaurs – fossils and fakes. Fossil museums are everywhere, and the Royal Tyrrell Museum is Drumheller’s biggest attraction.

More than 40 different species of dinosaurs have been discovered in the area. This Tyrannosaurus Rex isn’t real, but it is the largest dinosaur in the world, according to the city of Drumheller. 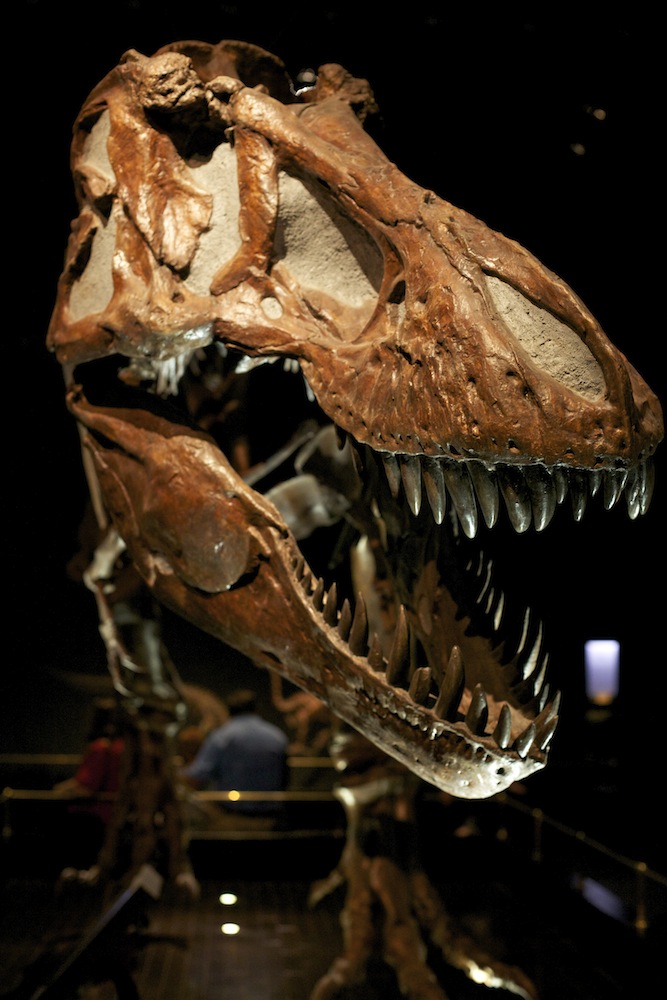 In 1884, while surveying the land around Deer River Valley, Joseph Burr Tyrrell, a cartographer, geologist and mining consultant, stumbled upon a 70-million-year-old fossilized dinosaur skull, which would later be named Albertosaurus, after the province in which it was found. His discovery was so significant that a museum was named for him – The Tyrrell Museum. In 1990, in preparation for the Queen’s visit, the city rebranded the attraction the Royal Tyrrell Museum. The Queen never showed up, but the name stuck.

Today the museum is home to more than 130,000 specimens of dinosaurs. The most intriguing exhibits are the museums carnivores, which includes a small T. Rex, almost fully intact, called “Black Beauty,” due to its dark color caused by exposure to manganese during fossilization. 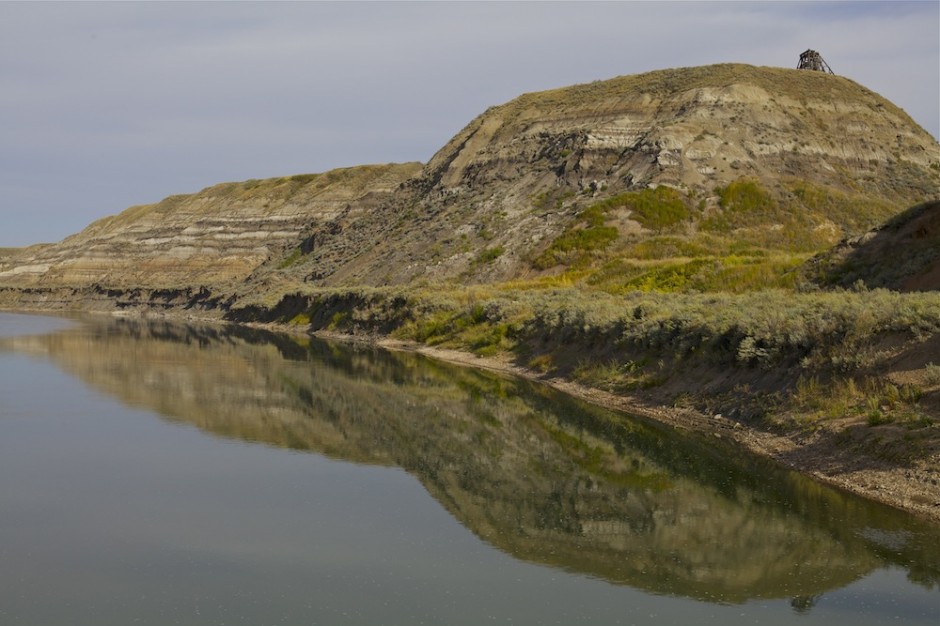 Coal was once king in these parts – there’s still coal enough to power the region for another 2,000 years – but today’s industry is all about oil and natural gas. Remnants of the region’s mining past remain intact, such as the miners’ suspension bridge outside Drumheller. On warm days surface coal in the surrounding hills still smolders. 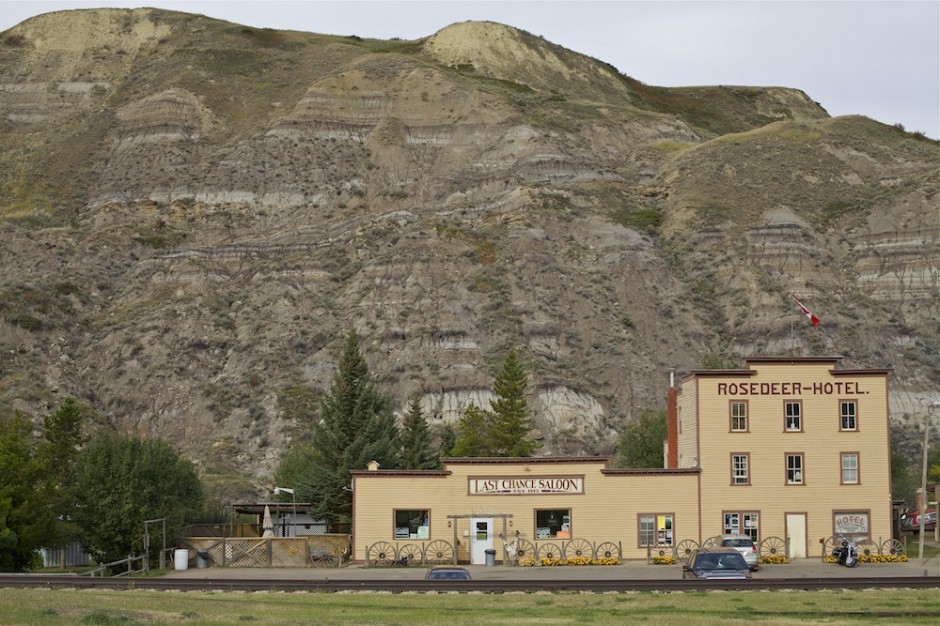 Legend has it that the Rosedeer Hotel is haunted. Guests have reported hearing the shriek of a woman supposedly murdered in a room on the third floor in the 1920s, while others say they’ve seen the ghosts of two old coal miners roaming the halls at night. But people will tell you these ghosts aren’t harmful; they simply enjoy a good laugh like the rest of us.

“Last year we had our end-of-the-year party here at the Rosedeer,” Badlands guide Pat Mulgrew told me. “We rented out all the rooms in the place. After a few cold sodas, we turned in. A buddy of mine went to bed alone, leaving his clothes on the floor. When he woke up the next day he found them all turned inside out, and his shirt was buttoned up and hanging over the chair. I swear – everyone swears – to this day that none of us did it.” 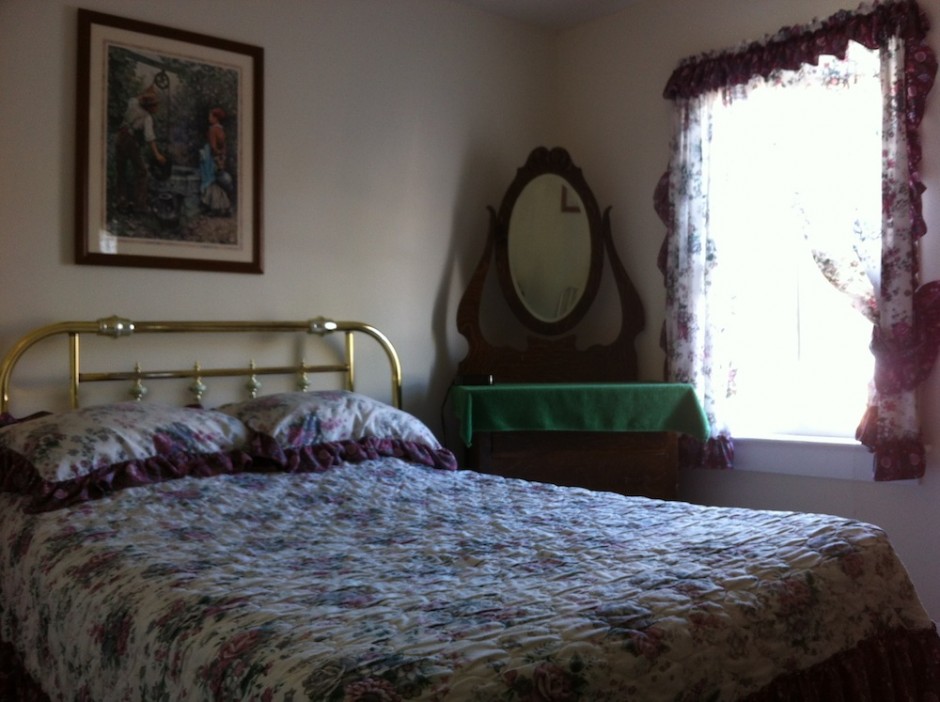 Inside the Rosedeer Hotel

I was one of three guests staying in the 99-year-old, 7-room hotel, located in the 25-person town of Wayne. Creaks and moans kept me up most of the night in my tiny room.

The owner, Fred Dayman, bought the place decades ago from his mother, who bought it from her uncle in 1948. At that time the town was nearly 3,000 people – mostly miners. Numerous music videos, films television commercials and shows have been shot here, including Shanghai Noon, starring Jackie Chan and Owen Wilson, and the short-lived 1996 TV series In Cold Blood, based on the Truman Capote novel. 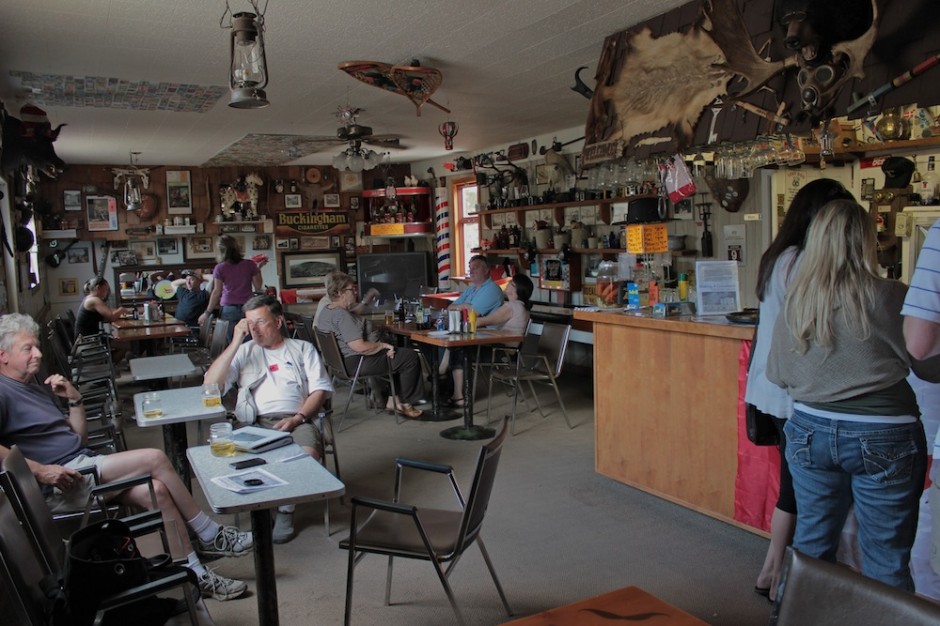 Popular with the biker crowd, the Last Chance Saloon, connected to the Rosedeer Hotel, serves up buffalo burgers with beer in old quart sealers (glass jars used for canning). In typical saloon fashion, you can also grill your own steak.

Bar staff tell the story of cranky old Lawrence. Back in 1978, after three men refused to pay for their tabs, he pulled out a revolver and fired a shot above each man’s head. The bullet holes are still there, encased in a wooden frame with his photograph. 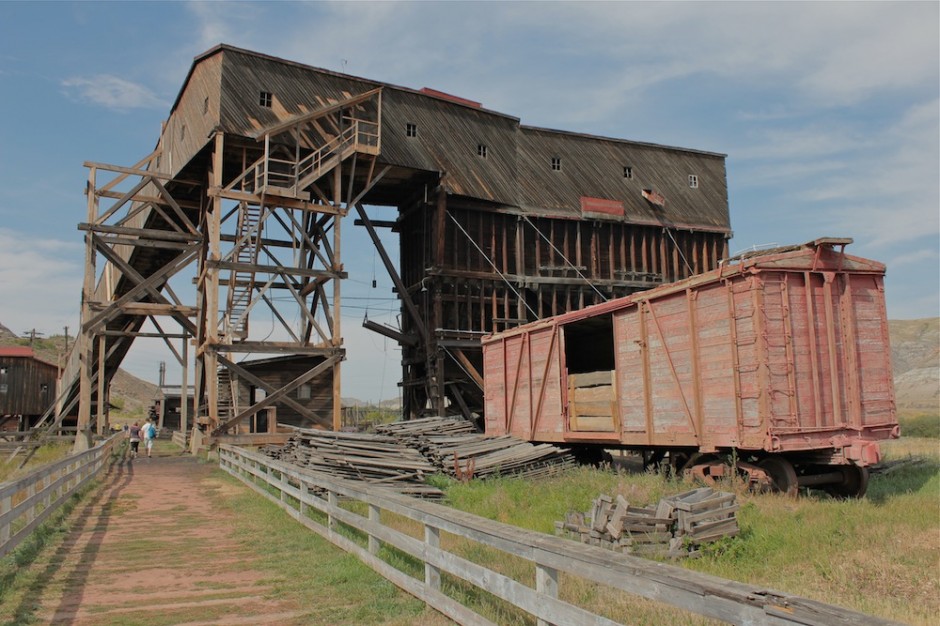 Opened in 1917, the Atlas Coal Mine, a national historic site, was one of the first and most productive mines in the Red Deer Valley. It was also the last mine to operate there, ceasing production in 1979. With its tipple (the long structure used to load coal into train cars) still intact, Atlas is the best preserved mine in the region. It produced 212,000 tons of coal in 1942, when it was operating a maximum capacity. 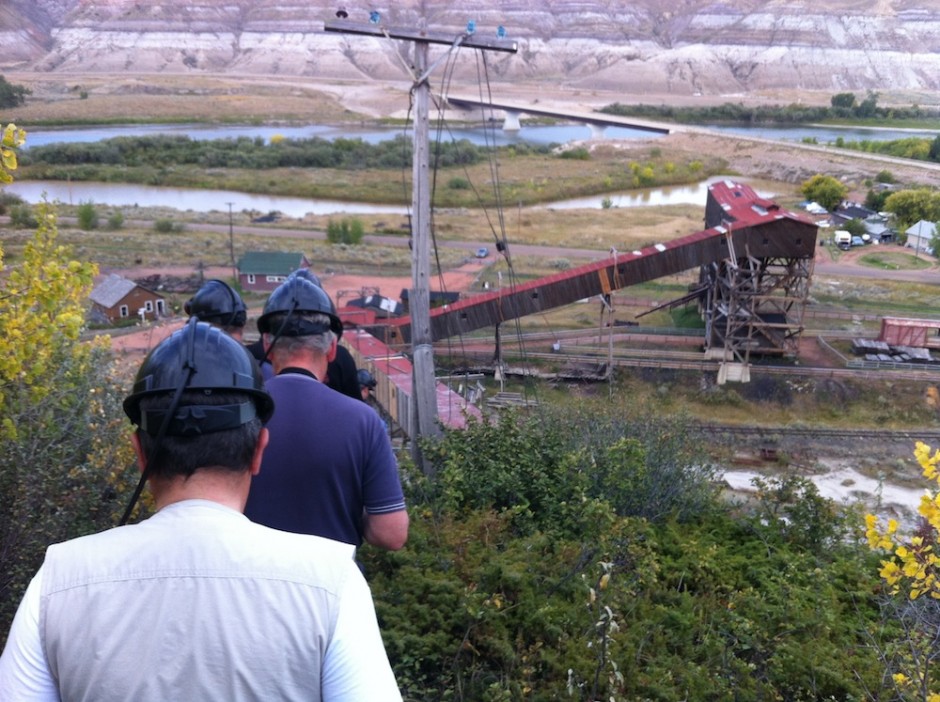 Workers at the Atlas Coal Mine

Thirteen people died working in the Atlas mine. Their deaths were caused by rock falls, cave-ins, methane gas and machinery-related accidents. 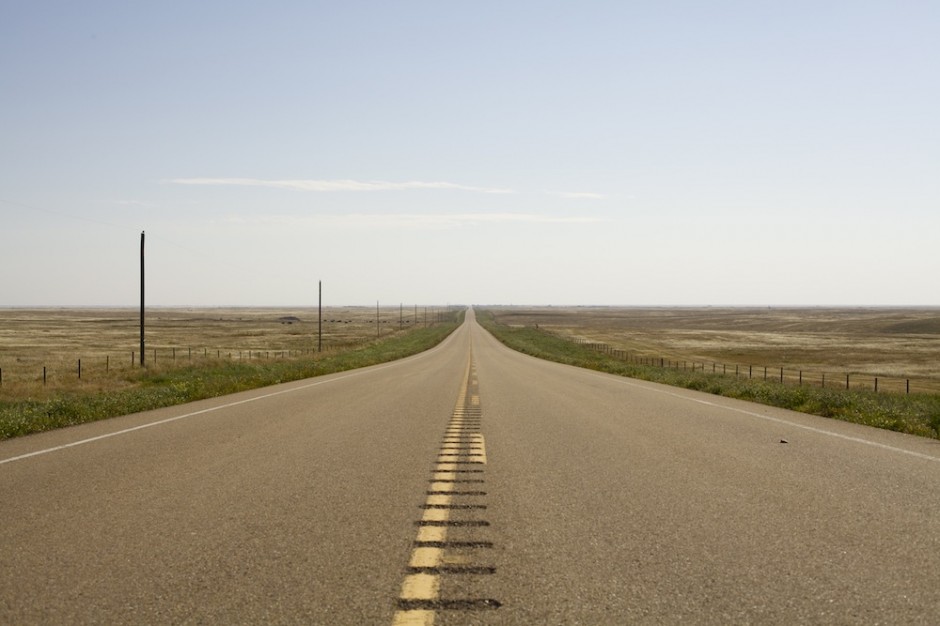 Cruising through the Badlands at speeds approaching 150 kph, sunroof open, windows down, and Jimi Hendrix shredding Dylan’s “All Along the Watchtower” turned up loud, sometimes I wouldn’t see a car for 100 kilometers. 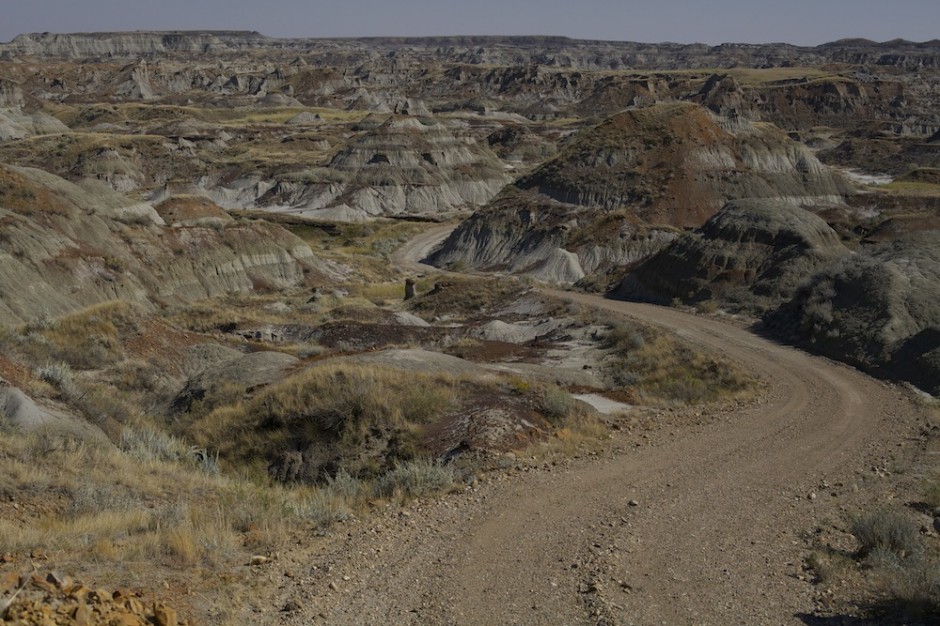 Dinosaur Provincial Park is a UNESCO World Heritage Site, but 76 million years ago it was a lush territory with rivers flowing eastward into the inland Bearpaw Sea and active volcanoes to the west spewing ash. Large reptiles, many of them carnivorous, roamed the area. After an ice age and later a deep thaw, during which time large glaciers cut out meltwater channels, it became what is now known as the Alberta Badlands, home to the highest concentration of dinosaur fossils of any territory of similar size. More than 300 species have been unearthed at Dinosaur Provincial Park. 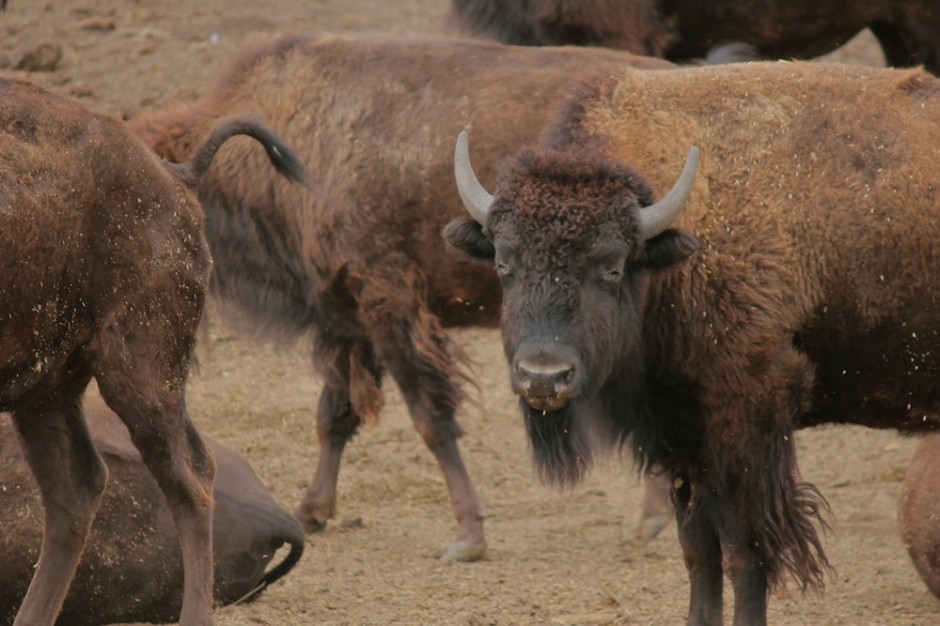 Millions of these animals once roamed the Badlands. The Siksika (Blackfoot) first nation revered them, and used their meat for food, their hide for clothes and blankets, their bones for tools, and their tails for horse whips. Today, some 100,000 to 200,000 thousand exist in the Badlands, raised mostly for their meat. That’s better than 1884, when the population was so low that many feared they’d go extinct. 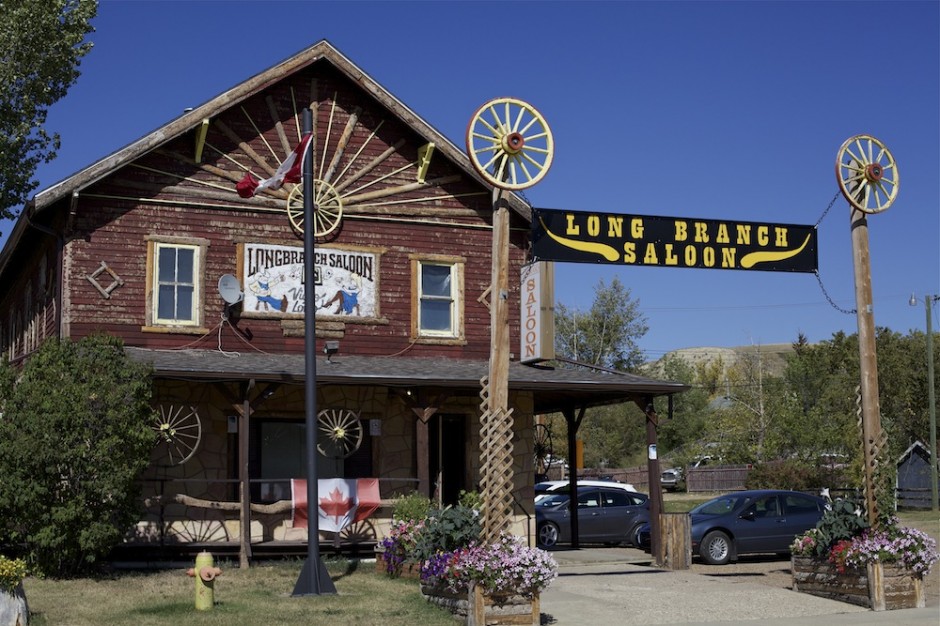 Saloons like the Long Branch are everywhere in the Badlands. Many, like this one, were used as bunkhouses for coal miners decades ago. 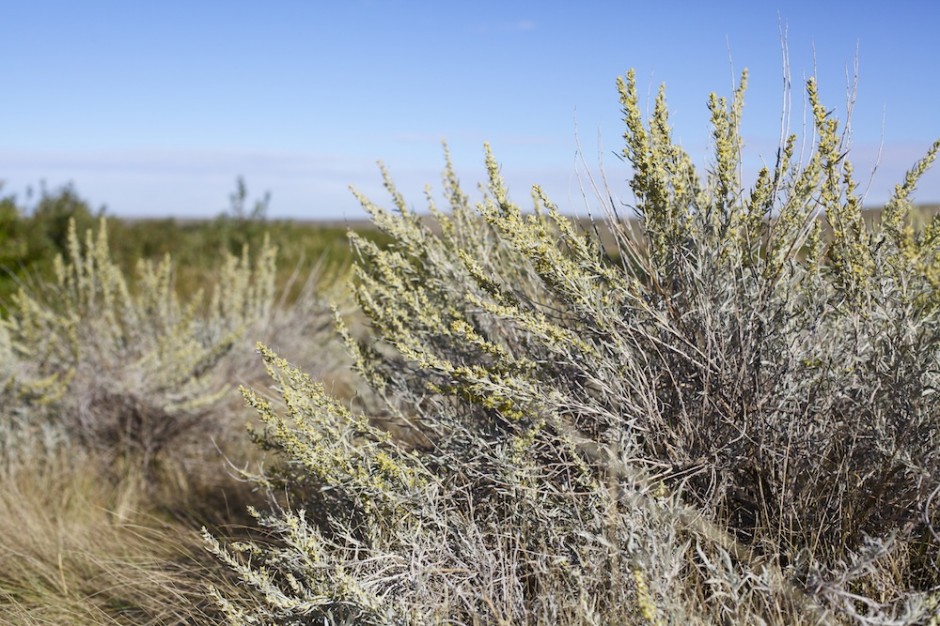 Prairie sage – some call it buffalo sage – was a staple in John Wayne westerns and a symbol of the Badlands. It’s possible to catch the scent of it just driving past in a car.

Tagged
Alberta, Canada
What did you think of this story?
Meh
Good
Awesome
✖
travelstoke
Download the mobile app
stoked by